Another bug-fix update to the recently released major CLion update is going to come soon. That means that today we are starting Early Access Program for CLion 2016.2.2, build 162.1889.3 is now available.

The autocompletion for directives was improved. Now you get the list right after typing the # symbol: 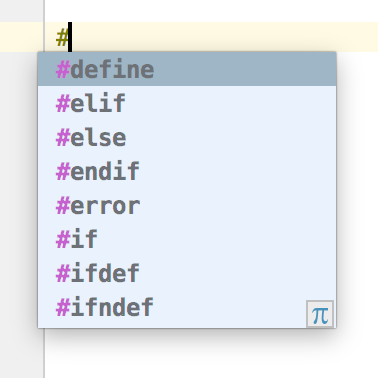 We’ve started working on C11 support and decided to provide some fixes with 2016.2.2 update. Previously some C11 keywords (_Thread_local, _Alignas, _Noreturn, _Static_assert, _Atomic) were not supported in CLion and caused false ‘red’ code errors. Starting from this build CLion’s parser can handle such keywords correctly:

There are more tasks related to C11 support that are currently under development and will most likely be available along with 2016.3 EAP: _Generic keyword support (CPP-2120) and code completion for C99 and C11 keywords (CPP-7272).

CLion’s inspections are useful to detect possible problems and inefficiencies on the fly, before you even compile the code. We are constantly working on their improvements, making them more accurate and correct. A couple of false-positives were fixed in this build:

Some errors were not reported on debugger startup that made the diagnostics hard. For example, GDB/LLDB pretty printer initialization problems. Now such errors are reported correctly in CLion.

You can download the build here and install side by side with the stable version of CLion. Please, note that this EAP build requires an active subscription (or you can start a 30-day evaluation period).

The Beta version of CLion 2022.1 is now available. Build 221.5080.93 is available for download from our website, via the Toolbox App, or as a snap package (for Ubuntu). No license is required, as this build is still free to use. DOWNLOAD CLION 2022.1 BETA Here are the main highlights: C++23: Added support for uz / z literal suffixes. Added support for preprocessing directives elifdef and

The new CLion 2022.1 EAP build, 221.5080.52, is now available from our website, via the Toolbox App, or as a snap package (if you are using Ubuntu). Please note that if you are on macOS, there is a separate build for Apple Silicon (M1 chip). Those of you already using the EAP5 build can apply a patch to update to EAP6. DOWNLOAD CLION 2022.1 EAP CMake updates CLion now automatically creates CMake