Posted on October 26, 2017 by Anastasia Kazakova

Today we are rolling out a new CLion 2017.3 EAP build (173.3415.24) with support for memory check from Valgrind and some polishing of the toolchains rework.

Good news everyone! CLion now comes with Memcheck integration; this means you can detect runtime errors and memory leaks right from the IDE. We know you are eager to try it out on your project, but first let me put a few general thoughts down here:

Valgrind works on Linux and macOS and is available in CLion on both of these platforms. CLion detects it automatically by searching for it in the standard locations defined by the system PATH variable. Or you can point CLion to Valgrind’s executable using: Settings/Preferences | Build, Execution, Deployment | Valgrind: 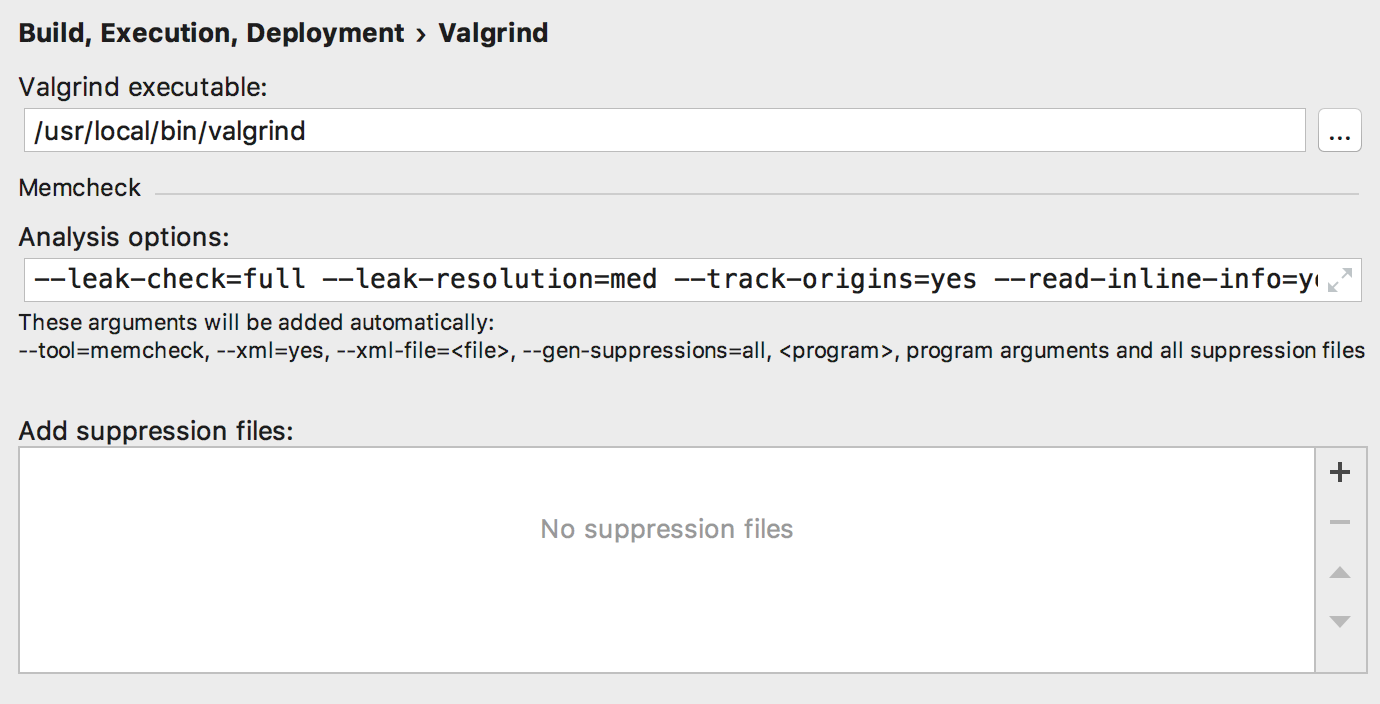 Options with which to run Valgrind and a list of suppression files which can be used, can also be configured on this page. For example, you may want to add a non-default suppression file to turn off Valgrind checks on some particular libraries you are using in your project. The typical case here, for example, would normally be to suppress OpenSSL or Boost.

Select a Run/Debug configuration and run it under Valgrind memcheck via the Run | Run Valgrind Memcheck… or special icon in the Navigation bar located next to the Run and Debug options:

This icon is present on all three platforms, but it is disabled on Windows as Valgrind is not available there.

You’ll get a new tab called ‘Valgrind’ in the Run toolwindow. It provides the information about all the possible errors found by Valgrind, along with the source code location (use F4 on Linux and ⌘↓ on macOS to Jump to Source) and a stack trace. The results are grouped by the type of leak encountered: 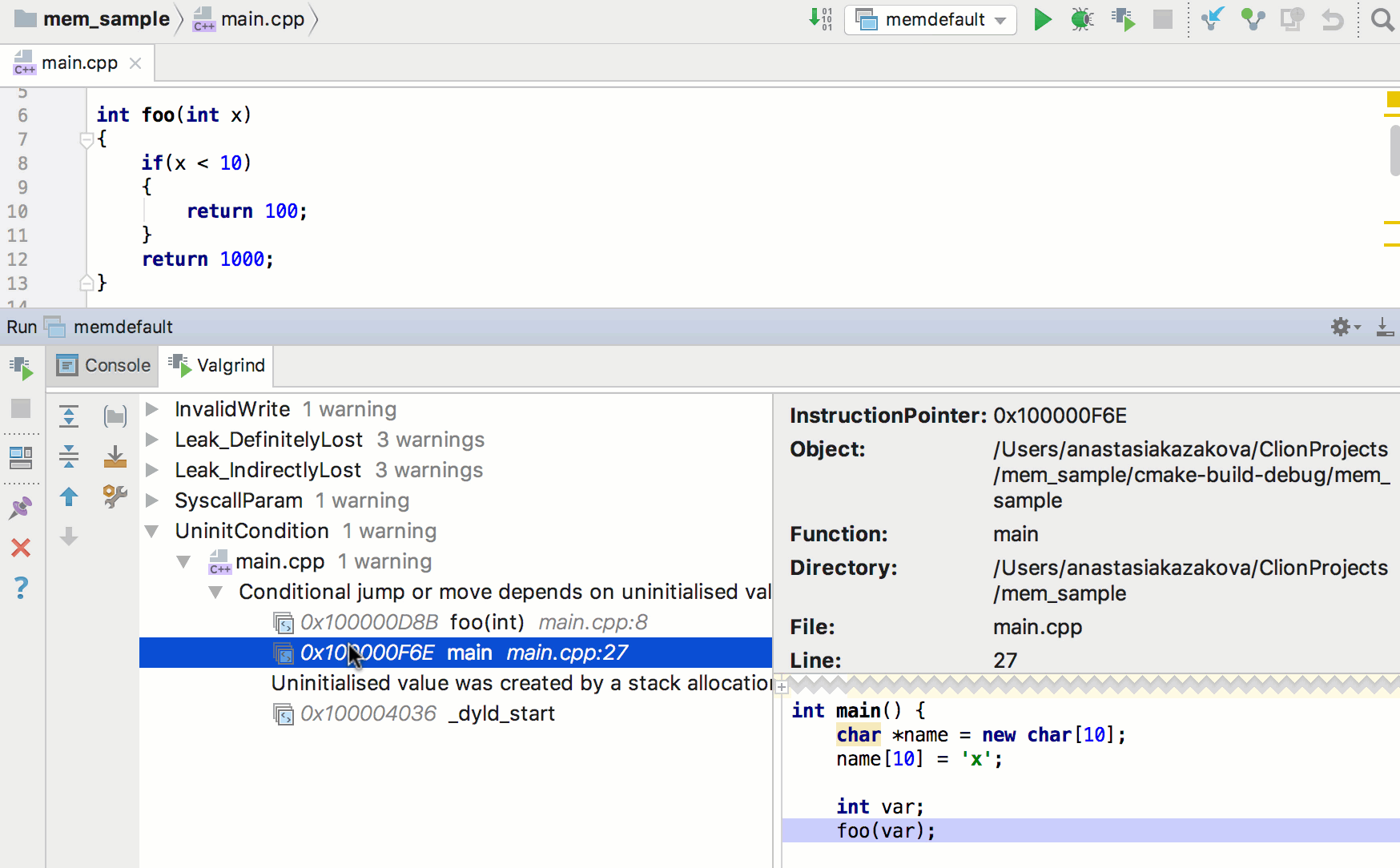 In the context menu on a particular error you can:

Google Test, Catch and Boost.Test targets can also be run with memcheck. You can either select necessary test target and press ‘Run Valgrind Memcheck’ icon in the Navigation bar, or use test icons in the left gutter when the file with tests is opened in the editor:

Check out the memcheck (Valgrind) integration into CLion and let us know what you think! Mind, UI is not final yet, so your feedback here is appreciated.

Multiple toolchains support was brought in with CLion 2017.3 EAP which allowed:

This EAP build polishes these changes and allows you to get several CMake profiles with the same build type. For example, you can use it if you want to build different Debug targets in your project with different toolchains. In previous CLion versions, you have to switch the toolchain in the CMake profile that corresponds to the Debug build type. Now you can configure several such profiles:

That’s it! Full release notes can be found here. 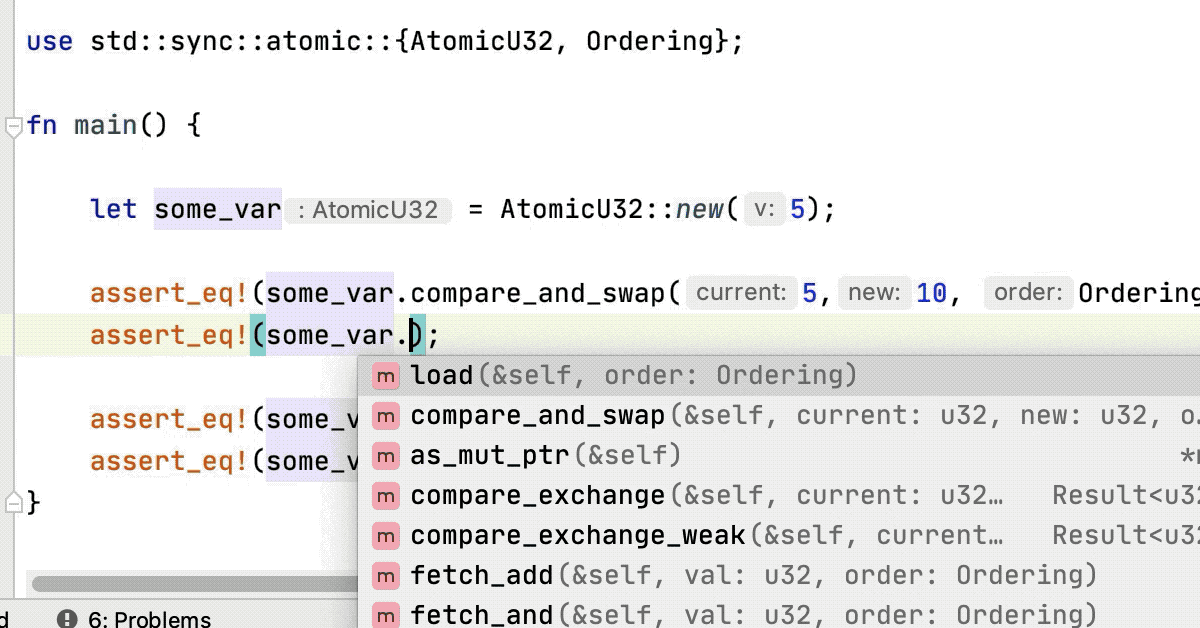 IntelliJ Rust has reached a major milestone: the new macro expansion engine has moved out of the experimental stage and is now enabled by default. In this post, we'll take a closer look at its implementation details and the features it brings for your code. How the plugin expands declarative macros The new engine status Code insight provided by the new engine (more…)
Posted on July 15, 2020 by Marina Kalashina

Last week the CLion 2020.2 EAP introduced the super-useful dangling pointer analysis. Have you had a chance to try it out yet? Meanwhile, we’ve been moving forward with CLion 2020.2! A new CLion 2020.2 EAP build 202.6250.12 is now available for download. You can get it from our website, via the Toolbox App, or as a snap package (if you are using Ubuntu). A patch update is ready for anyone using the previous 2020.2 EAP build: DOWNLOAD CLION 2020.2 EAP C++20 support improvements We’ve updated the Clangd engine in CLion 2020.2, and fixed many crashes that happened in it on the C++20 cod
Posted on July 8, 2020 by Anastasia Kazakova
Subscribe