Kotlin M5 is Out!
Release
Releases

Kotlin M5 is Out!

In two weeks from now it will be one year since Kotlin started out as an open source project. It’s been a lot of hard work over this time, with a huge help of the community: we received 164 pull requests, which means a contribution every other day or so. Today we make another step and roll out Kotlin M5. This blog post covers the changes introduced in this release.

M5 was a short milestone (you should subtract the New Year’s break from its term), but we got rid of 144 issues in the tracker.

Many IDE subsystems were improved, including JUnit runner, search of Kotlin classes from Java, better diagnostics for invalid external annotations, new icons and support for the Darcula color scheme: 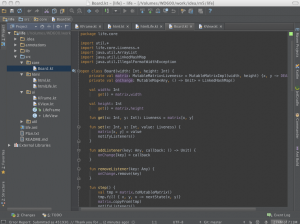 Minor changes in the language include better support for Float literals (you can now simply say 1.0 where Float is expected) and ability to mix positioned and named arguments to function calls.

In the older versions of Kotlin every package that had top-level functions or properties declared was compiled to a class named “namespace”, where the top-level declarations were represented by static methods. When you used more than one of these “namespace” classes in Java, you ran into a name clash: you can not import two classes with the same name into the same compilation unit. With Kotlin M5 package classes are named after respective packages, which gives them different names and fixes this problem.

The naming convention works as follows: package “org.example” gets a class “org.example.ExamplePackage”. I.e., we take the simple name of the package, capitalize it, append “Package” and put that class into the package itself. So far it works pretty well.

NOTE: your older versions of kotlin-runtime.jar will not work any more because of this change. The compiler will complain about an “incompatible ABI version”, and the IDE will propose to replace the old runtime jar with a new one.

Since M5, Kotlin wants you to mark inner classes explicitly, and nested classes are “static” by default. This may break your existing code, and in the IDE there’s a handy quick-fix to the rescue (just press Alt+Enter on the error).

Generics are tricky, and their combination with nullable types is trickier still. In Java everything is nullable, for example, consider a Java method foo(ArrayList<String>), Kotlin (before M5) used to see it as ArrayList<String?>?, i.e. the collection may be null, and its elements may be null too. This is the safest thing we can do, but it proved to be very inconvenient: if you have an ArrayList<String> in Kotlin, you can’t pass it to foo(): ArrayList is invariant in its generic parameter and thus ArrayList<String> is not a subtype of ArrayList<String?>. This causes a lot of pain, even when KAnnotator is used.

So we decided to change the default strategy for generic argument types, and load ArrayList<String>? in the case above.

This change may break some of the existing code. Most of it is straightforwardly fixable by removing unneeded question marks. If you want the old type, you can add an external annotation to your Java definition.

But what about safety? Now Java code may fool you by giving you a collection of nulls instead of strings, and your Kotlin code will fail. This may happen, but we make it fail helpfully: Kotlin checks data received from Java and fails early and with a detailed error message like this:

This is much better than an NPE sometime later, maybe. The same kind of checks is performed for function parameters: if someone calls a Kotlin function illegally passing a null, it will blow up early, blaming the guilty as precisely as possible.

Kotlin’s type-safe builders are awesome, especially if you note that they are not a built-in mechanism, but merely a combination of nice language features (mainly extension functions and higher-order functions). One thing was bothering builder writers in older versions of Kotlin: you could not define a vararg function that could also take a function literal as an argument outside parentheses. Now you can do it:

can be called as

You can also use named and positioned arguments together (including varargs):

Kotlin’s standard library evolves too, and this time we revised ranges. To remind you, ranges are used a lot in loops and conditions:

The new ranges are more consistent internally and generalize properly to cases with descending iteration, nontrivial increments and so on. We’ll provide more details in a separate blog post this week.

Now, constructors are even more convenient: in the generated byte code this class will get a default constructor, i.e. the one that takes no arguments (uses the default values for them). This case comes up a lot when using Java frameworks like JAXB, so now Kotlin is even more Java-friendly.

You can download Kotlin M5 from the plugin repository. It requires IntelliJ IDEA 12 (using recently released 12.0.3 is recommended).

Have a nice Kolin!