Today we are releasing a new milestone: Kotlin M11, which brings such long-awaited features as secondary constructors, a first glimpse of true reflection support for Kotlin and much more.

M11 brings quite a few language changes, some of which are breaking changes and/or deprecation of old ways of doing things in favor of new ones. Some of your code may break, but we’ve done our best to make your transition path as smooth as possible.

This feature has been most awaited by Android developers, because subclassing standard view classes on Android requires having more than one constructor. Now you can do that:

Please refer to the user docs and the spec document for more details.

Another change, also related to constructors, is prefixing initializer blocks with the soft-keyword init.
The main reason for this change is that the formerly used syntax (where just curly braces in a class body denoted an initializer block) didn’t work out too well when an initializer followed a property declaration (which is pretty common):

An error was reported on the call of baz(), because the initializer looks exactly like a trailing lambda passed to it. The only workaround was to put a semicolon after the property initializer, which looks rather unnatural in Kotlin. So, since M11, we require init before the initializer block:

The old syntax is deprecated, i.e. you’ll get a warning, not an error. Also, the IDE provides an Alt+Enter quick-fix action to convert the old syntax to the new one, which has an option to bulk update the whole project.

As you all probably know, Kotlin classes do not have static members. Instead there may be a special singleton object associated with a class, which we used to call “class object” ‐ a rather unfortunate term. So, we somewhat redesigned the concept, and, with your help, chose another name for it: companion object.

The unfortunate wording was not the only reason for this change. In fact, we redesigned the concept so that it is more uniform with normal objects.

Note that a class can (and always could) have many objects (usual, named singletons) nested into it:

Since M11, one of these objects may be declared with the companion modifier, which means that its members can be accessed directly through class name:

One last step: the name of a companion object can be omitted (the compiler will use the default name Companion in this case):

Now you can still refer to its members though the name of the containing class: KotlinClass.foo(), or through full qualification: KotlinClass.Companion.foo().

As you can see, unlike what we used to have with class objects, companion objects are completely uniform with normal objects.

Another important benefit is that now every object has a name (again, Companion is used when the name of a companion object is omitted), which enables writing extension function for companion objects:

Kotlin has higher-order functions, which means that you can pass a function around as a value. Before M11, there were two ways of obtaining such values: lambda expressions (e.g. { x -> x + 1 }) and callable references (e.g. MyClass::myFun). M11 introduces a new one, which is very logical, if you think about it:

So, you can use a function, in its traditional syntactic form, as a value. See user docs and the spec document for more details.

Among other things, function expressions enable us to make a step toward supporting multi-declarations in parameters of lambdas. The final goal (not implemented yet) is to be able to, say, filter a list of pairs with the syntax like this:

Whenever you really need one of these, please switch to using function expressions instead.

The IDE provides a quick-fix that migrates your code automatically.

For a long time there was a restriction on using return expressions in lambdas: a local return was only allowed if the lambda has an explicit return type specified. This was caused by a limitation in the type inference algorithm. Now, the restriction is removed, and we can use local returns freely:

Importing is one of the least-visible language features for IDE users, but it has a great influence on how tools work, and occasionally on the users, too.
In M11 we made the order of *-imports (also called “on-demand imports”) insignificant, and made some other tweaks that enabled us to implement efficient automatic management of import directives in the IDE.

Implementing Kotlin-specific reflection (rather than making you use Java reflection on Kotlin classes) is a long-running project that has required a lot of work in the compiler. Essentially, we have to factor out a large portion of the compiler and ship it as part of the runtime. This includes: loading Kotlin-specific metadata from the binaries, representing Kotlin symbols as objects (historically, we call them descriptors), loading Java declarations as Kotlin ones (because Kotlin reflection should work on Java objects too) and so on.

At last, we present the first results of this work: the ability to introspect properties, provided through a new kotlin-reflect.jar that ships with the compiler (a lot more functionality will be added soon).

We ship kotlin-reflect.jar separately (not as part of kotlin-runtime.jar), because it is rather big at the moment: about 1.8MB. We will look into reducing its size, but it is likely to always be rather substantial, so making everyone always ship it with their applications is not an option (especially for Android developers).

As a consequence, you may need to add this jar to your classpath, if you use property literals (::propertyName). The M11 compiler will yield an error if you don’t, but later this requirement will be relaxed. The IDE will offer you a quick-fix action that adds the jar automatically to your project.

To obtain a reflection object for a class in Kotlin, use the following syntax:

You get an instance of KClass<MyClass>, which you can introspect, e.g. get its properties.

See more in the user docs.

Kotlin reflection API works both for Kotlin and Java classes, and you can “convert” from Kotlin to Java reflection objects and back. For example, you can say kClass.java and get a java.lang.Class instance, and vice versa: jlClass.kotlin gives you a KClass instance.

@Nullable and @NotNull in Java

As always, Java interop is a big priority for us, and this time we are improving on the platform types feature we shipped in M9: now the compiler issues warnings on misuse of Java values annotated as @Nullable and @NotNull. This is not as strict as it used to be before M9, but it doesn’t break as often either.

Next step would be to issue Java nullability errors in a safe way (so that an error can always be fixed reasonably), and this is planned for the next milestone.

We all know about findViewById(). It is a notorious source of bugs and unpleasant code which is hard to read and support. In Java the way around this problem is through libraries such as ButterKnife and AndroidAnnotations, which rely on JSR 269, but it is a javac-specific API and is not supported in Kotlin (yet).

Since M11, Kotlin has its own solution to the findViewById() problem, which does not require JSR 269: the new kotlin-android-extensions plugin for the Kotlin compiler allows you to access views in a type-safe way with zero extra user code (no annotations or other such things) and no runtime libraries required.

To use this extension, you need to enable it in your Gradle build and install an extension plugin into your IDE. See more here.

The following refactorings and intentions are now available: 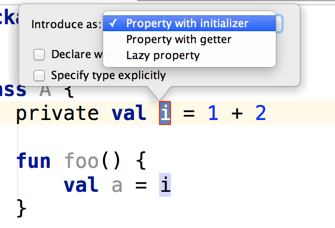 Ability to convert a function to a property and vice versa

Unused declarations inspections is now available project wide, allowing these to be highlighted in any context.

We now have the ability to evaluate lambda expressions and anonymous objects in the debugger:

We now have a fully fledged language to provide inline documentation. It is called KDoc and based on a combination of JavaDoc and Markdown. The full reference is available online. With M11, IntelliJ IDEA provides support for KDoc via completion, validation and refactoring support.

One of the big changes in the Standard library is renaming streams to sequences. This was done so as to avoid confusion with Java 8 streams.

will generate an infinite lazy sequence of numbers starting at 1. There are also extension functions allowing to convert existing iterables to sequences

There have also been several bug fixes in the standard library.

In addition the team contributed to some updates to RxKotlin, making it more idiomatic in light of the recent changes in Kotlin.

Last but not least, we have also revamped the standard library API reference, which is now available on the Kotlin Web site.

The JavaScript backend now has better support for inline functions. We’ve also made it simpler to reuse libraries targeted at JavaScript through the new concept of “JavaScript binaries”, which will be covered in more detail soon.

Other changes and improvements

In addition to the above, this release also brings:

Over 220 bug fixes since M10 as well as many external pull requests from the community.

As always, you can update the plugin in IntelliJ IDEA 14 (or earlier versions) if you have a previous version installed, or install directly from JetBrains plug-in repository. You can also download the standalone compiler from the release page.