Kotlin M12 is out!
Releases

We are happy to present Kotlin M12, bringing some rather important changes and new features:

Many of the changes introduced to the language and core libraries are deprecations. Use “Code Cleanup…” action to fix all warnings in your project automatically.

As we mentioned before, we decided to reserve square brackets for some more productive future uses, and make annotation syntax more familiar to Java users. So, since M12, we write @Foo(args) instead of [Foo(args)]. More details can be found here (even more — in the spec document).

Note that @ is not required in most cases. Normally we write annotations without any escaping:

Since M12 @name is an annotation, but it had a meaning before, i.e. it was a label. We had to find some other syntax for labels, and now they are declared with @ at the end:

So, loop@ declares a label, and break@loop uses it.

Before M12, annotations in Kotlin were allowed to use java.lang.Class, for example:

Note that Kotlin sees Java annotations as if they referred to KClass instead of java.lang.Class:

Now, when we need to turn a KClass into a java.lang.Class, we can call .java on it, e.g. Foo::class.java or jann.value.java.

The full form is only needed when we want to annotate a primary constructor or add a modifier. In most cases, the old familiar syntax still works:

As our traits are rather limited anyways, and Java’s interfaces are pretty much the same thing, we have deprecated the trait keyword, so please use interface instead.

As usual, quick fixes and “Cleanup Code…” will help you along.

The new syntax for enums is very close to what Java has. Enum entries should now be separated with commas:

Now, when you declare a member of an enum class, it must go after all entries, and there must be a semicolon after the last entry:

Lastly, when enum has a constructor, you can call it by simply passing the arguments next to the name of the entry:

The old syntax is deprecated.

We unified function types and extension function types, so that now they can often be used interchangeably. For example, we can pass String::length where a function '(String) -> Int' is expected.

If you used Kotlin’s function classes (e.g. kotlin.Function1) in your Java code, you will need to make adjustments to it, because from now on these classes reside in the kotlin.jvm.functions package. You can migrate all your Java code by running “Cleanup Code…” with the “Usage of deprecated function classes in Java” inspection.

Smart Casts Made Even Smarter

Of course, the smart cast only works when the compiler knows that no modification could possibly have happened since the relevant check was made. Note that loops often times distort this picture (due to some technical reasons we can not use a fully-fledged data flow analysis for smart casts), so when a var is mutated in a loop, smart casts may not work.

Usages of public and protected immutable val‘s in the same module can also be smart-cast now:

Some more features were deprecated:

Use quick-fixes and “Cleanup Code…” to migrate your programs.

Kotlin has default arguments that dramatically reduce the needs in overloads, but Java clients can not benefit from this feature directly.
In M12 we have added an annotation jvmOverloads that tells the compiler to generate N+1 overloads for a Kotlin function that has N default parameters.
For example,

We can now step through bodies of inlined function, thanks to source mapping tables emitted by the compiler into generated class files.

Some technical notes: every class file has line numbers assigned to instructions. For inlined function bodies we assign line numbers beyond the actual end of file (e.g. if the file has 50 lines, inlined code has line numbers starting with 51), and these “virtual” numbers are mapped to actual sources of the inlined code that possibly reside in other files. The standard JVM debugger understands the source mappings and can step through the appropriate files and lines. The only caveat is that exception stack traces may sometimes contain line numbers beyond the end of file. We are looking for a solution to this problem.

In Java, annotations are interfaces and their parameters are methods of those interfaces. Thus, the ordering of the parameters is insignificant, and the call site can not rely on it. This is why Java requires that all arguments but one (named value) are passed as named.

While annotations declared in Kotlin have proper constructors that admit positioned parameters and even varargs, we can not rely on Java annotations in this respect, so from now on the following applies to Java annotations:

JavaScript back-end is catching up with the JVM one. M12 adds support for

As mentioned earlier in this post, M12 adds initial support for Annotation Processing, so that frameworks like Dagger 2 work with Kotlin now. The main limitation of the current implementation is that Kotlin code can not refer to any declarations generated by the annotation processors (so, for Dagger you need to write at least one small class in Java).

We are going to fix this limitation in the future by generating stubs for classes emitted by the Kotlin compiler. Details in the aforementioned post.

Kotlin Gradle plugin for Android now supports JUnit tests. All we need to do is follow the standard procedure for Java, but now we can write our tests in Kotlin.

Some of the recent changes in Kotlin enabled a great addition to our ecosystem: now Quasar provides fibers (lightweight threads), Go-like channels, Erlang-like actors, and other asynchronous tools for Kotlin! See the announcement here.

As we are working on the Kotlin standard library, some things get changed and/or deprecated. Use quick fixes and the “Cleanup Code…” action to migrate your code. (Please make sure that you have attached the sources of the standard library to your project.)

Kotlin IDE now supports the standard Introduce Parameter refactoring that turns an expression selected inside a function into a parameter:

Additionally, Introduce Lambda Parameter is available to extract a piece of code as a function value:

Rename has an option to rename related declarations (variables, subclasses etc) as well:

As we are adding a lot of deprecations lately, the IDE now supports ReplaceWith quick-fix: there’s an (optional) extra parameter to the deprecated annotation, where we can specify an expression to replace a deprecated call: 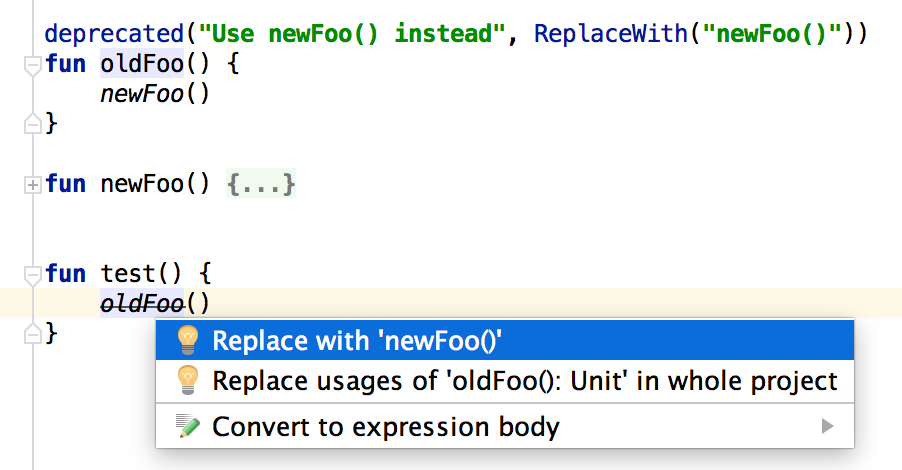 There is an intention action to add ReplaceWith to user’s deprecated declarations.

Things That Haven’t Made It (Yet)

We are still working on some of the changes we announced earlier, such as More Null-safety for Java. Will roll them out as soon as they are ready.

There will be some more M12-related material published in the nearest future. Stay tuned!

kapt: Annotation Processing for KotlinFibers and Actors in Kotlin with Quasar
Comments below can no longer be edited.

The newest release of IntelliJ IDEA, version 2021.1, comes with the improved Kotlin plugin. Enjoy an improved developer experience with faster code completion and highlighting, change signatures with better IDE support, benefit from better debugging experience for evaluating properties, and more. Here is what you’ll get by installing the new plugin: Faster code completion and highlighting

Kotlin 1.5.0-M2 is the last milestone release for Kotlin 1.5.0, which is coming this spring. So this is the last chance to make sure that your projects will successfully work with Kotlin 1.5.0. Install 1.5.0-M2 If you migrate your projects now, you can save yourself time and energy in the future, when Kotlin 1.5.0 comes out, and you can help us provide urgent fixes before the release. For example,