For this release, we focused on improving support for the functionality introduced in previous releases. Read about all the new features we’ve prepared for you. You can also watch our screencasts (part 1 and part 2) to get better acquainted with the main features. 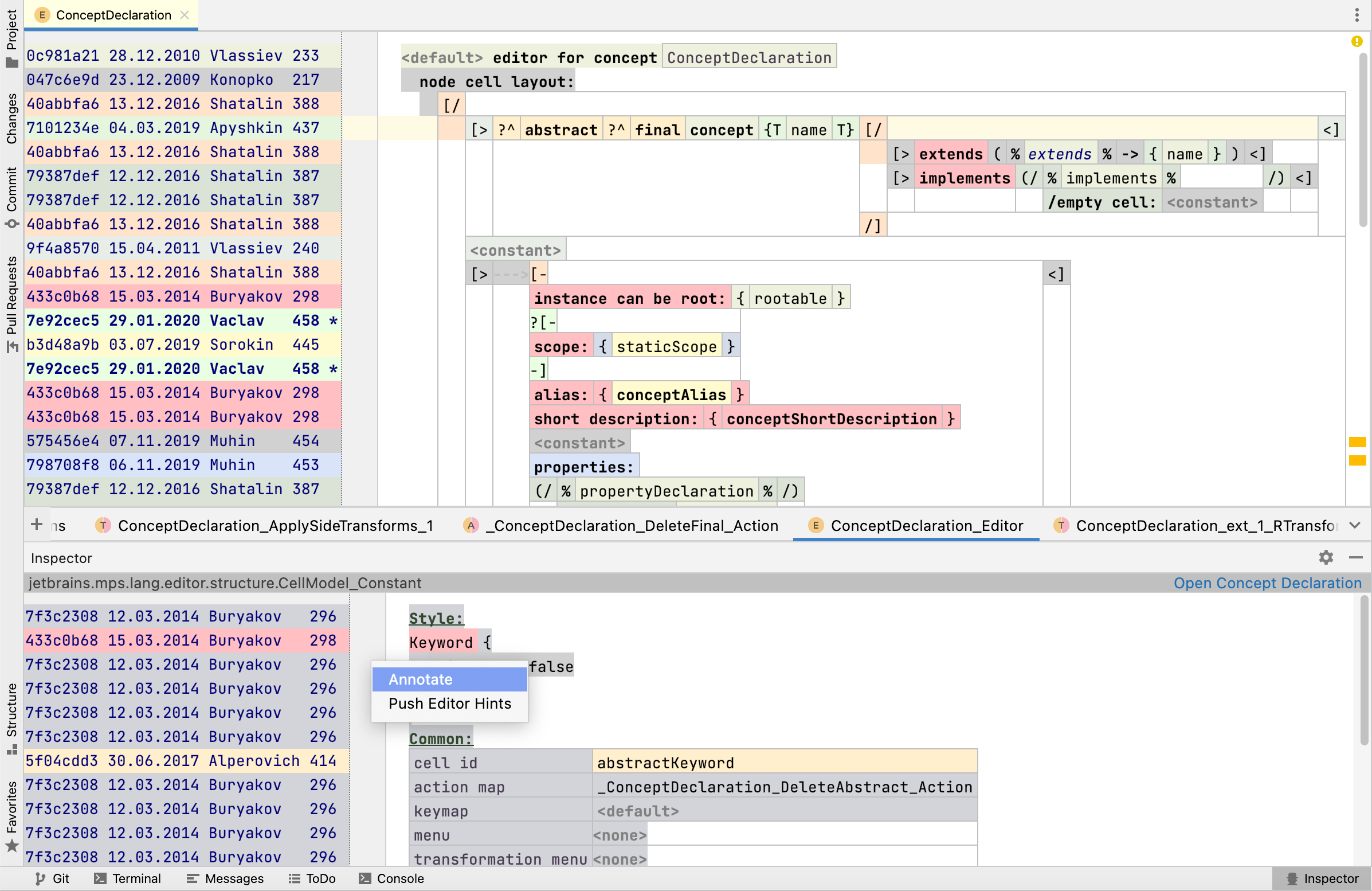 A lot of editing issues have been fixed to provide a better typing experience, such as:

Because of some structural changes, several migrations are provided with the language:

SModel support is now available in MPS Kotlin with the new jetbrains.mps.kotlin.smodel language. Along with the enhanced compilation support, it allows for the usage of Kotlin code in language modules (as helper classes, for example).

On top of regular types (node, concept, links, and references), it leverages the increased flexibility of MPS Kotlin to bring concept-type parameters. Functions, variables, and classes can now declare and use such parameters and reuse them in their internal types, which allows for easier typing and leverages Kotlin’s smart casts.

Kotlin compilation support has been improved with better persistence. As a result, Kotlin classes are no longer erased when MPS is restarted.

A new option has been added in build scripts to mark a module to be compiled with the Kotlin compiler. Insertion of this flag is manual – no automatic check is currently available to set it to true. The flag should be added when a module containing Kotlin files is going to be compiled to JVM.

When adding comments to BaseLanguage, it is now possible to customize them further with text style. Comments support bold (Ctrl + B), non-italics (Ctrl + I), underlined (Ctrl + U), and bold-non-italics styles (Ctrl + B -> Ctrl + I).

MPS used to discover models the moment they were registered with a repository. Discovering a model in a regular project module meant traversing the file system to find out files and their types, and reading at least the header information about the model.

Now, modules don’t engage in model discovery unless models are requested. There’s a new SModule API (SModule.forEachRegisteredModel()) to access models already known to a module only, without triggering model discovery or loading. If you use SModel API clients, especially SRepositoryContentAdapter subclasses, you may want to adopt the new API to benefit from the improvement.

MPS now comes with a consistent API to create references, as well as an updated internal presentation. These changes aim to improve the model reference/persistence system, which is scheduled for later releases. Nevertheless, the change already allows you to reduce any model’s in-memory storage by approximately 5%.

MPS now respects versioned jar entries and would expose Java classes with a version that matches the actual Java runtime.

Although MPS and the IntelliJ Platform were using a stripped-down version of the Log4j library without known security issues, they have both switched logging to the standard java.util.logging package. A compatibility layer is implemented (based on SLF4J) to redirect requests from the Log4j API to a Java Util Logging (JUL) implementation.

Ant build scripts that MPS generates from lang.build declarations use separate tasks to generate and compile sources (MPS-own <generate> and regular Ant <javac>). There’s now a new <mps.make> task that corresponds to the Make process launched from the IDE. It is responsible for the complete transition of a model down to compiled code. The task combines both code generation and compilation, which saves time as MPS needs compiled classes anyway for its module classloading purposes (as <javac> tasks often duplicate compilation efforts already completed during <generate>). It also makes Ant command-line builds and the Make process launched from the IDE much more similar to each other, thus increasing the reliability of your build process. Watch a demo.

Generator tests have been improved with matching options that allow ignoring node ordering. There’s also a new action to reorder model roots, which helps to bring reference test models to the desired state. Watch a demo.

MPS caps the time spent in the Model-to-Text (M2T) transformation part to address potential errors in TextGen aspects. The limit was previously hard-coded. However, lately some big models have been reaching the limit, causing an undesired timeout exception. So now, there’s an IDE setting that you can define to control the timeout. Support for command-line builds is planned for future releases. 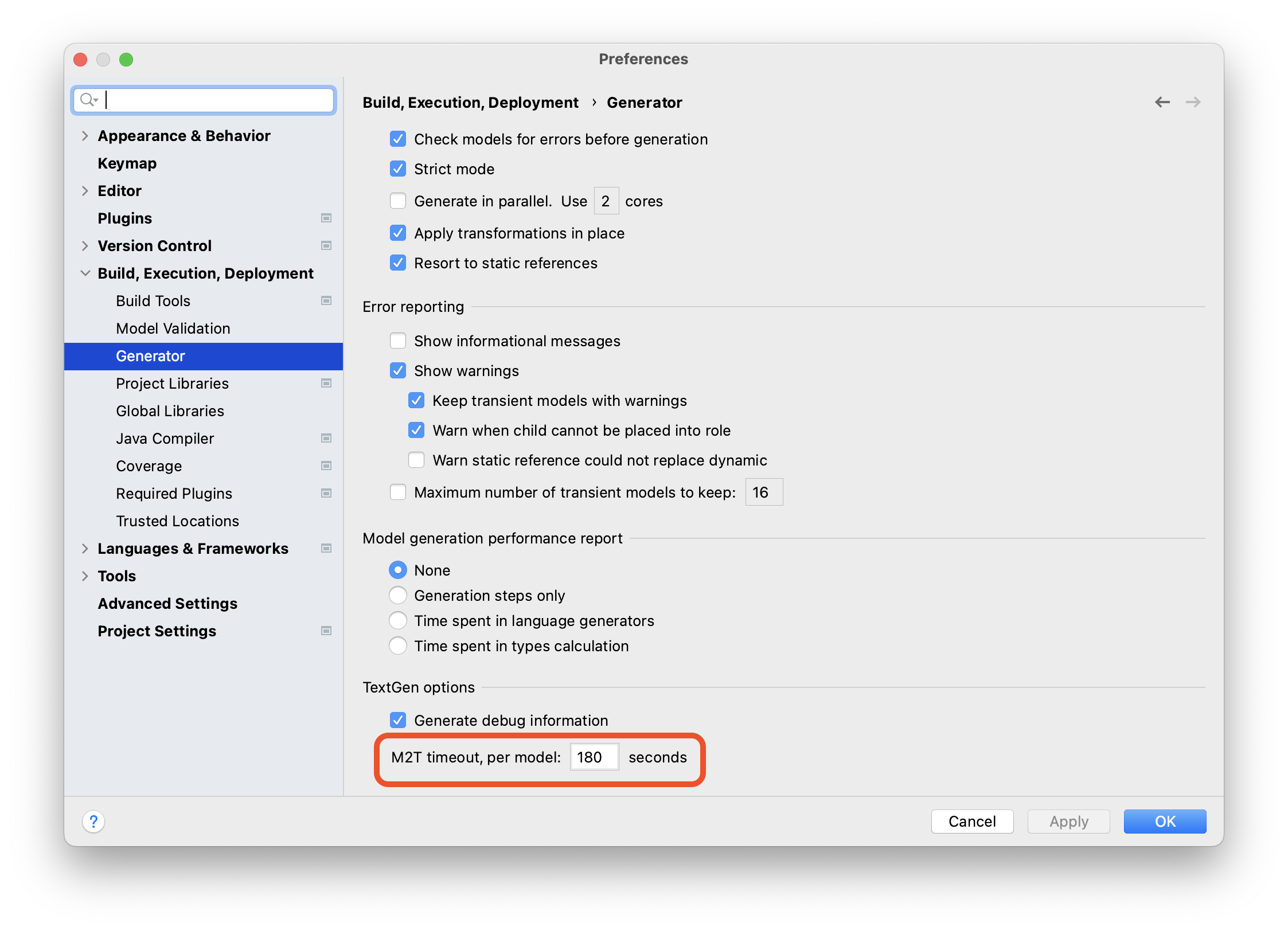 The Cloning repository progress bar now appears on the Welcome screen and is shown right in the projects list, which makes it clearer and easier to use.

It’s now possible to quickly generate tables of contents in Markdown files based on the document headers.

It’s now possible to make a GPG signature in a commit. The signing will appear in the Commit Details section of the Git tool window. 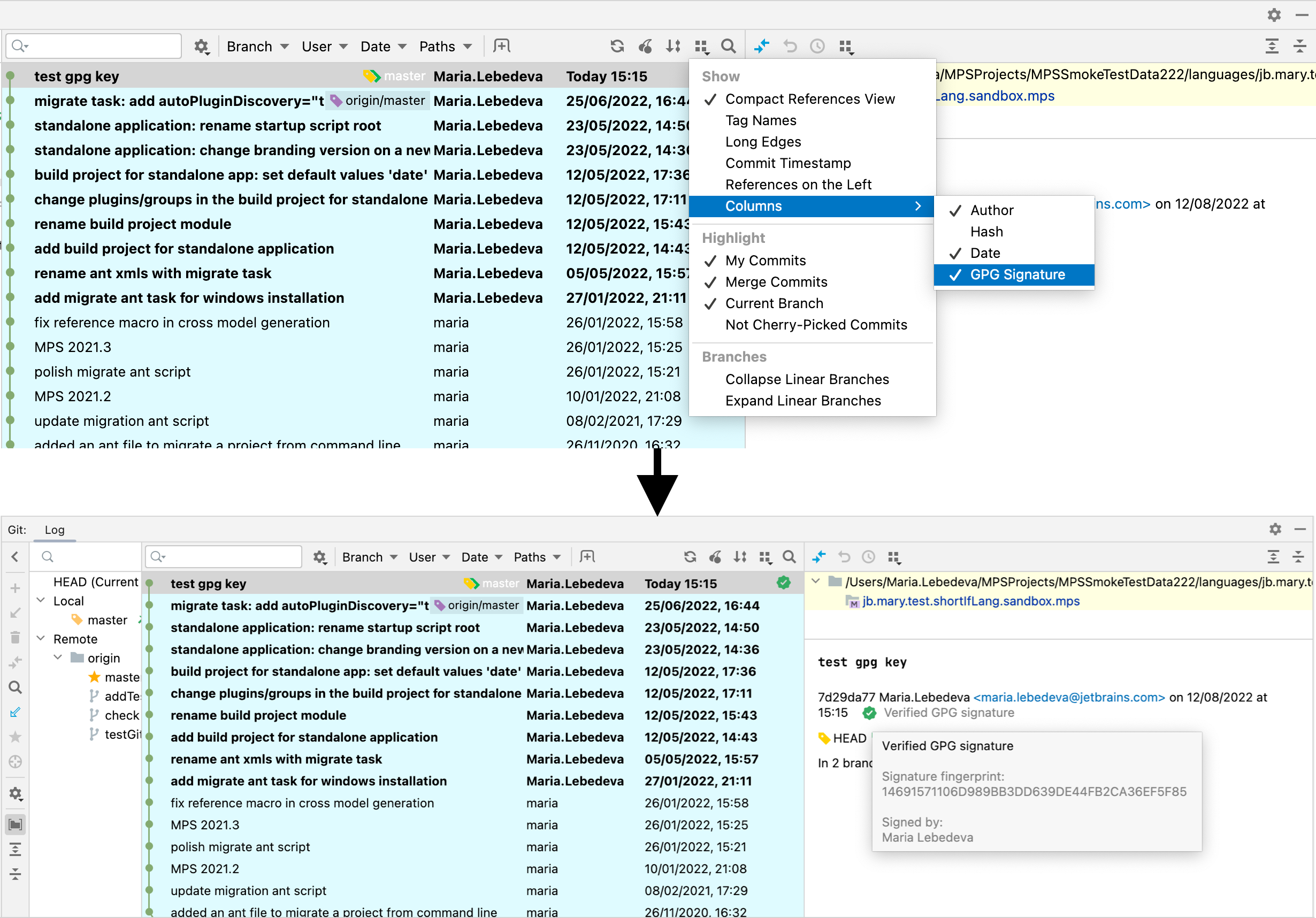 When working with Markdown files that contain instructions with commands to execute, you can run those commands directly from the file by using the run icons in the gutter.

That’s it for now. As with every release, we have prepared the Migration guide for a smooth transition from an older version. We have also fixed a bunch of bugs to make the product more stable. If you encounter more bugs, please report them to our issue tracker.

This is our third bug-fix release for MPS 2021.2. You can find the complete list of bugs fixed in this version here. Thanks to the community’s help, we spotted a critical bug in the Version Control / merge subsystem that was causing the generator to break. The problem was happening because the stereotypes (e.g. @generator) were being lost after merging models. The issue is fixed in this version 2021.2.3. If you encounter this bug while using a previous version of MPS, please add the stereotype manually to fix the issue. DOWNLOAD MPS 2021.2.3 Please report any issues you find to our i