Completion was updated with the 2016.2 release to try and make the most relevant objects or parameters float to the top of the completion list, and removing some methods or variables. This should save us keystrokes and time finding what we are looking for, but it appears that this has had some unintended consequences.

When you invoke completion (using CTRL+Space by default) and PhpStorm can identify the type of the item you need to complete, it will now float elements of that implied type to the top of the completion list. PhpStorm can imply the type in various ways, from the variable assignment, PHP 7’s type hinting, PhpDoc annotations (and more). 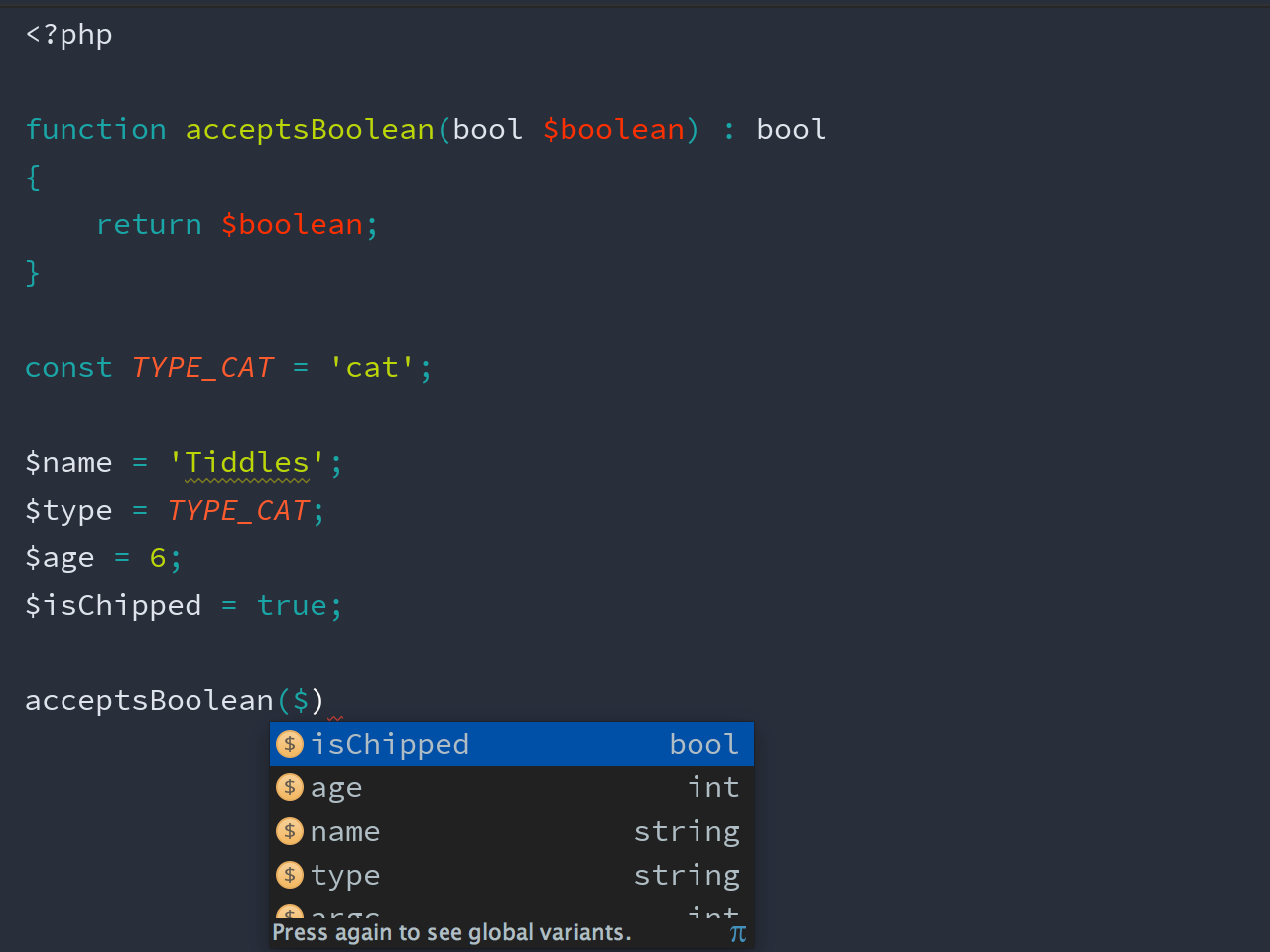 Here you can see that because the `acceptsBoolean` function only takes a `bool` (as defined by the PHP 7 scalar type hint), the `$isChipped` variable gets floated to the top as it’s the only boolean we’ve defined in scope.

Also useful is the new way that we can invoke a filtered completion list by using Shift+CTRL+Space; this will remove any items that aren’t of the inferred type from the list completely. This is all good and makes finding the right thing to complete with quicker and easier.

The next completion change was to remove static methods from the completion list when completion is invoked in the context of `$this->`. This change happened as a result of a ticket opened by a user a few years ago. Calling static methods using `$this->` is an entirely valid use case but is not that widely used in PHP. While this seemed like a good idea at the time, it’s had the unintended consequences of making writing assertions in PHPUnit a little more painful.

PHPUnit’s assertions are written as static methods, but are usually called in the context of `$this` to make tests clean and readable. This latest change has therefore meant that when writing PHPUnit tests, you don’t get the `assert*` methods in the code completion list. Obviously, this is a Bad Thing™. You can get the full list of methods by invoking code completion for the second time, but this extra keypress has got some people (rightly) annoyed.

It seems we may have made a mistake here, albeit with the best intentions, but we’re working on fixing it. Current thinking is to show the complete completion list if completion is invoked in the context of a PHPUnit test, but we haven’t come to a firm decision yet.

Let me know what you think we can do to correct this, or comment on the YouTrack ticket with your opinions. We’re hoping to get this fixed quickly.

– Gary and the PhpStorm team