In PhpStorm, you can use the Extract method refactoring to transform a group of statements into a method. Surprisingly enough, doing the opposite has not been possible up until recently. In PhpStorm 2018.1, we are introducing the Inline method refactoring. 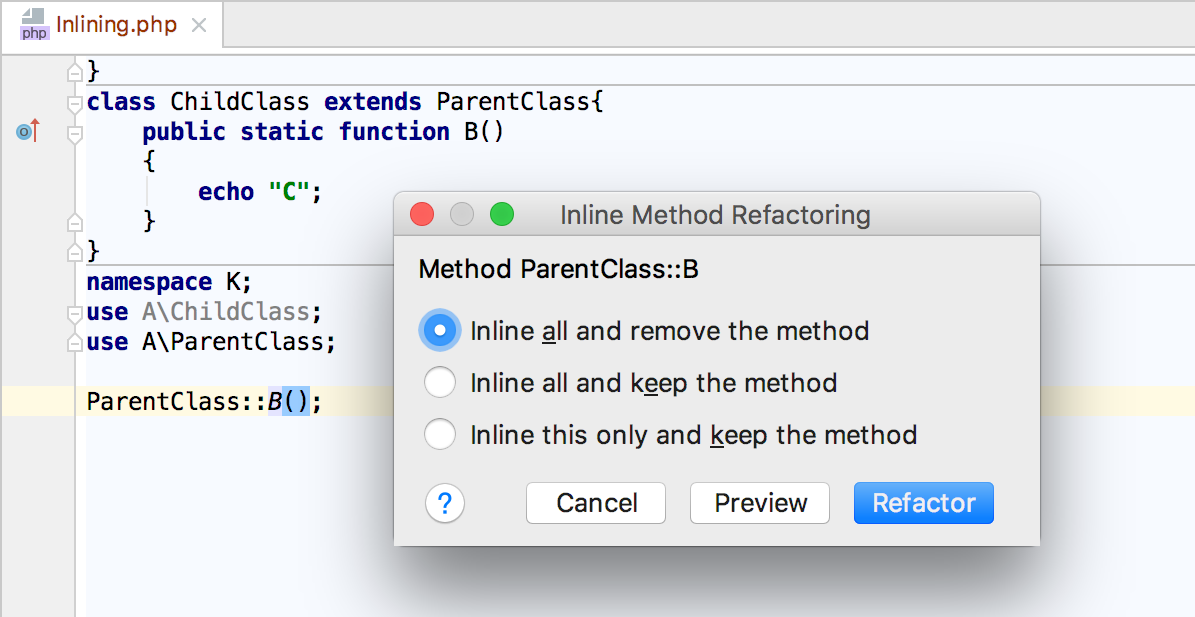 Sometimes using a method’s body in your code turns out to be more obvious than using the method itself. The good solution for the situation is to replace the calls to the method with the actual method’s content.

The Inline method refactoring will assist you with that: simply invoke Refactor | Inline on a function or a static method call, and automatically inline the code from the called function. You can optionally delete the inlined function or method if there are no more usages:

If the refactoring is possible, PhpStorm will perform all the necessary transformations and reformat the resulting code.

It’s not always as simple as it sounds though: in some cases, inlining a method can be quite tricky, and we’ve done our best to make sure such cases are covered properly.

For example, PhpStorm will handle functions with multiple calls as well as make use of the parameters’ default values:

Functions with multiple return points are supported, as well:

For class methods, PhpStorm will auto-import classes and properly handle self to resolve a method within the classes hierarchy:

For now, PhpStorm only allows you to inline static class methods. As a workaround, you can use two refactorings on a desired method, Make method static and Inline, in sequence. In the future, we plan to support the inlining of non-static methods, too. And since this feature is under active development, feel free to report other inlining cases that don’t work as you expect, or are simply not covered by the refactoring.

This new major PhpStorm release includes improved Blade and Twig support, added functionality to docblock type annotations and attributes, a bunch of new and useful inspections, several improvements to the editor, and more. You can download PhpStorm 2022.1 here and read through this post to learn about all the new features and improvements inside. Let’s dive in! What’s new? Frameworks and