What is the Early Access Program (EAP)?
We at JetBrains believe that making tools for developers should greatly involve listening to developers. Early Access Programs allow you to try pre-release versions of our software to evaluate features that will be added to the next release, closely participate in discussions about PyCharm, and influence the release from early stages onwards.

Once you’ve downloaded the latest EAP build (from its official page), you’ll start getting updates with new features and improvements every week (to receive notifications about updates, make sure to set “Early Access Program” in your update settings). Your feedback is welcome and very much appreciated in our issue tracker or in the comments section of this blog post.

PyCharm 5.1 EAP build # 144.3891.17 introduces a lot of new features, bug-fixes and improvements. There are a number of recently added features that are unique to PyCharm, as well as additional features and improvements from the Web and IntelliJ Platform sides.

Take full control over package repositories and PyPI mirroring solutions with support for optional repositories in PyCharm. To specify a custom repository (including devpi repos): 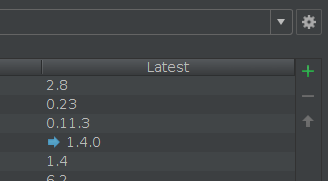 In addition to the existing code folding functionality in PyCharm’s code editor, we’ve implemented code folding for other code structure elements such as multi-line dictionaries, lists and comments, and if-else, for/while and try-except-finally code blocks in case a code block contains more than one statement:

Stepping over yield from and await

A small but neat improvement for developers who use Python 3, PyCharm’s debugger is now able to step over yield from and await expressions. Put a breakpoint before a yield from or an await expression and press the Step over button (F8). The debugger will step to the next line after the expression:

In addition to stepping over yield from and await expressions as described above, PyCharm’s debugger receives a number of performance improvements that we hope you’ll enjoy. One year before we released PyCharm 4, we joined efforts with Fabio Zadrozny, a PyDev maintainer, and merged our debugger code with that from the original PyDev repository. Now the work on the debugger continues from both sides (PyCharm and PyDev) in one place. As a result of the unification and the work done since then, the debugger in PyCharm has grown more powerful.

The very recent improvement that you can now see in PyCharm 5.1 EAP is that the debugger became much faster and now has optional Cython modules for even additional speedups. The debugger is reported to be now overall 40% faster without Cython and 138% faster with Cython in the benchmarks created. In real world cases, even better gains are expected as the benchmarks were done for the cases where the debugger has more overhead than usual. You can read more about the performance improvements and see some detailed benchmark statistics in the original blog post written by Fabio.

Some of these features are already bundled with PyCharm 5.1 EAP, while others are available for installation from the JetBrains plugin repository.

In addition to the new features and improvements from the Web side, PyCharm 5.1 receives a lot of changes from the underlying IntelliJ Platform. The most noteworthy changes include:

Another important announcement is that the whole IntelliJ Platform has migrated to Java 8. That means that now you can not launch PyCharm under a JDK older than Java 8. This change affects all the EAP builds (144.*) and further major releases this upcoming spring.

Download PyCharm 5.1 preview build 144.3891.17 for your platform right from the project EAP page, and please report any bugs and feature request to our Issue Tracker.

PyCharm Team
The Drive to Develop

The fourth EAP build supports another Python 3.11 PEP, gets Angular standalone components, improves code insight for ParamSpec, fixes long-awaited debugging issues for WSL projects and the WSL interpreter, and introduces more fixes. A new build is available from our website, via the Toolbox App, or as a snap package (if you are using Ubuntu). If you are on macOS, there is a separate build for Apple Silicon (M1 chip).  Important: EAP builds are not fully tested and might be unstable. Python 3.11: Support for marking individual TypedDict items as required or potential