Last week we published a blog post on the new pytest fixture support in PyCharm 2018.2. This feature was a big part of the 2018.2 work and proved to be a hit. But it wasn’t the only notable pytest work: 2018.2 also delivered support for behavior testing with pytest-bdd, a project that provides behavior testing with pytest as the test framework. Our What’s New in 2018.2 video gave a quick glimpse of this support.

Let’s rewrite the tutorial from last week, showing the pytest-bdd support instead of simply working with fixtures. Behavior-driven-development (BDD) support is a part of PyCharm Professional Edition, previously covered in a blog post about using Behave and an older blog post about BDD. This tutorial puts pytest-bdd to use.

What and Why for BDD

If you’re new to BDD, it can appear a bit strange. You write a programming-free specification, known as a “feature”, that describes how the software is supposed to behave. You then implement that specification with test code.

BDD can seem like overhead. But if you find yourself lost in your test code, the feature spec can help you step back from the details and follow the high-level intent. Even better, when you come back to your code months later, it is much easier to get up-to-date. Finally, if you feel committed to the “Given/When/Then” test style, pytest-bdd moves that commitment from “dating” to “marriage”.

We’ll use the same example application as the previous blog post.

To follow along at home, make sure you have Python 3.7 (our example uses dataclasses) and Pipenv installed. Clone the repo at https://github.com/pauleveritt/laxleague and make sure Pipenv has created an interpreter for you. (You can do both of those steps from within PyCharm.) Make sure Pipenv has installed pytest and pytest-bdd into your interpreter.

Then, open the directory in PyCharm and make sure you have set the Python Integrated Tools -> Default Test Runner to pytest, as done in the previous blog post.

This time, though, we also need to set Languages & Frameworks -> BDD -> Preferred BD framework to pytest-bdd. This will enable many of the features discussed in this tutorial. More information is available in the PyCharm Help on pytest-bdd.

What parts of our project deliver business value? We’re going to take these requirements, as “features”, and write them in feature files. These features are specified using a subset of the Gherkin language.

Right click on the tests folder and select New, then choose Gherkin feature file.
Name the file games. Note: Some like to group BDD tests under tests/features.

Let’s change the feature file’s specification to say the following:

This Scenario shows the basics of BDD:

We might have a number of other scenarios relating to games. Specifically, the “winner” when the score is tied. For now, this provides enough to implement.

As we type this feature in, we see some of the features PyCharm Professional provides in its Gherkin support:

If you run the tests, you’ll see….no difference. The games.feature file isn’t a test: it’s a specification. We need to implement, in test code, each of the scenarios and scenario steps.

PyCharm can help on this. As mentioned above, PyCharm warns you about an “Undefined step reference”: 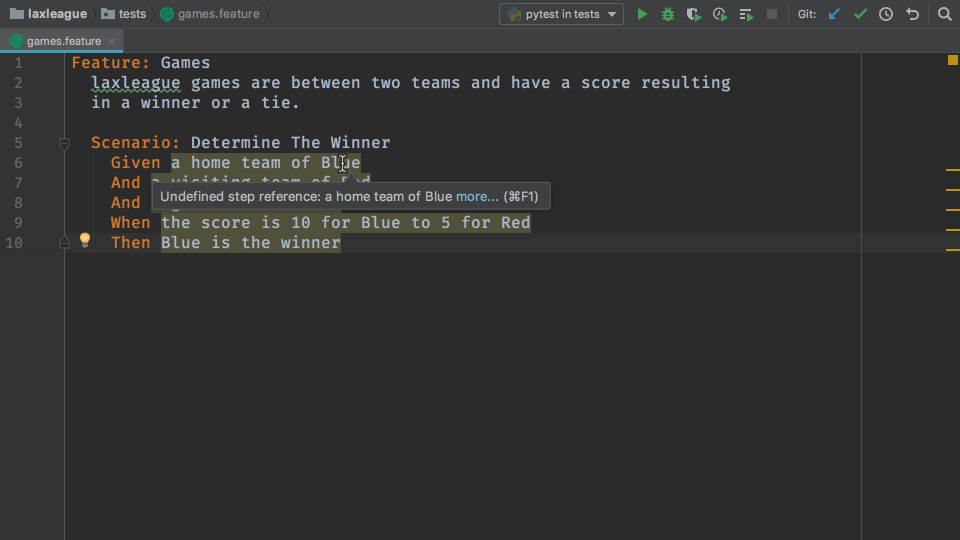 If you Alt-Enter on the warnings, PyCharm will offer to either Create step definition or Create all steps definition. Since 2018.2 does the latter in an unexpected way (note: it’s being worked on), let’s choose the former, and provide a File name: of test_games_feature: 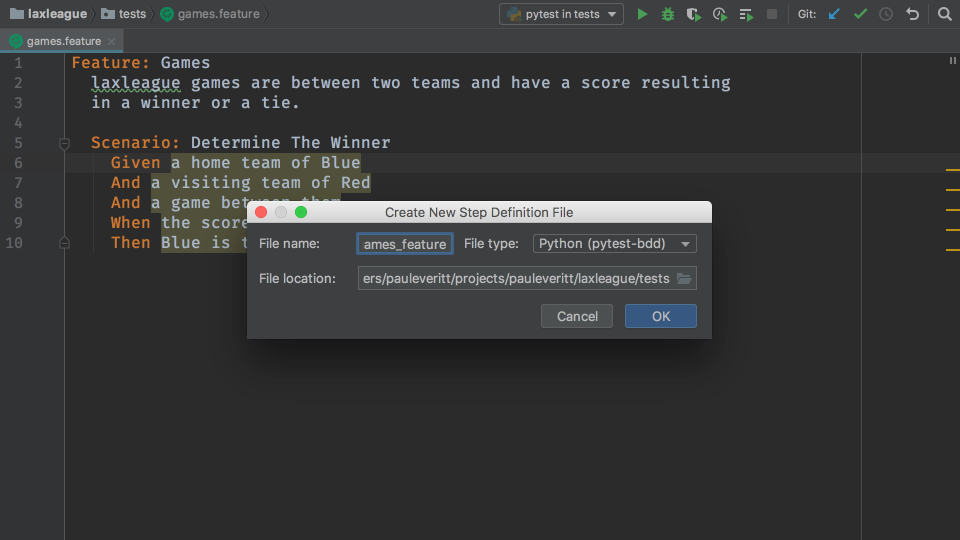 Here’s what the generated test file test_games_feature.py looks like:

These are just stubs, of course, which we’ll have to come back and name/implement. We could implement the other steps by hand. Let’s instead let PyCharm continue generating the stubs, into the same file.

2018.2 doesn’t generate the scenario, which is what actually triggers the running of the test. Let’s provide the scenario, as well as implement each step, resulting in the following for the test_games_feature.py implementation:

To see this in action, let’s run the test then take a look at what pytest-bdd is doing.

You’ve already run your regular pytest tests, with fixtures and the like. What extra does it take to also run your pytest-bdd tests? Nothing! Just run your tests: 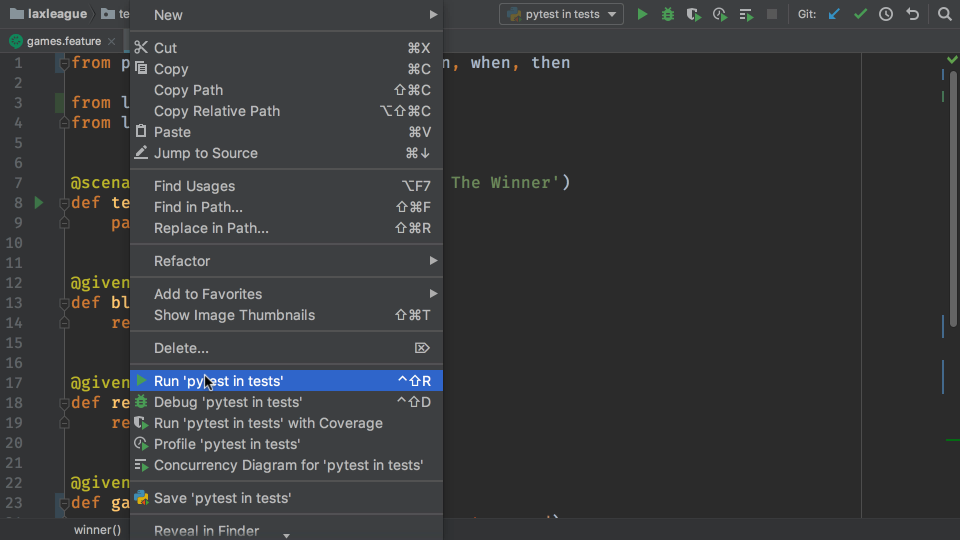 Your pytest-bdd tests show up just like any other test.

Let’s take a look at some things pytest-bdd is doing:

It’s an interesting approach. It’s verbose, but it clearly delineates the “Given/When/Then” triad of good test cases. Plus, you can read the almost-human-language Gherkin file to quickly understand what’s the behavior being tested.

You might have noticed that the feature file specified a score for the game but it was ignored in the implemented tests. pytest-bdd has a feature where you can extract parameters from strings. It has several parsing schemes. We’ll use the simplest, starting by adding parsers to the import from pytest_bdd:

Note: You could also do this the productive way by using the symbol and letting PyCharm generate the import for you.

The feature file says this:

Let’s change our @when decorator to parse out the score:

When we do so, PyCharm warns us that Not all arguments.... were used. You can type them in, but PyCharm knows how to do it. Hit Alt-Enter and accept the first item: 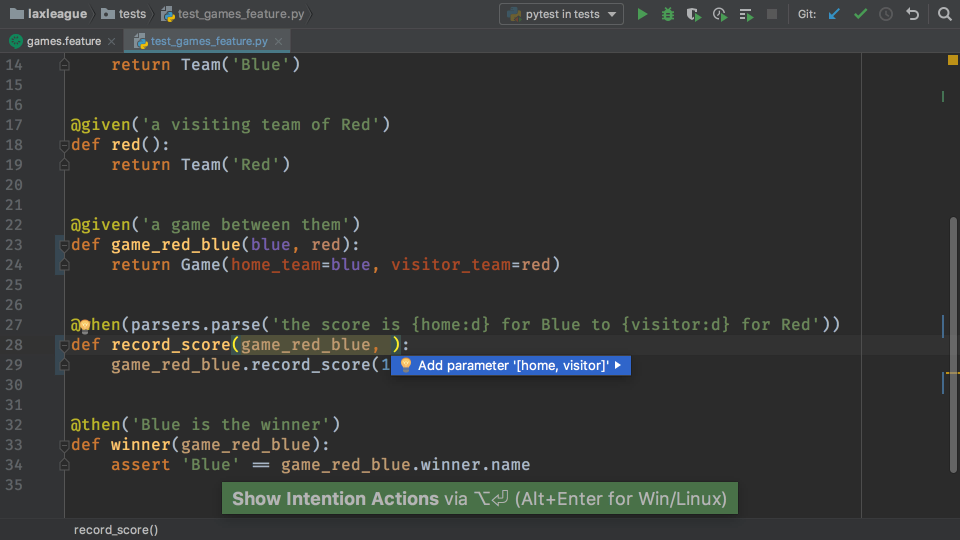 After changing record_score to use these values, our function looks like this:

As we experiment with lots of combinations, moving this to the feature file is very helpful, particularly for test engineers.

Want more? Gherkin and pytest-bdd support “Scenario Outlines” where you can batch parameterize your inputs and outputs, just like we saw previously with pytest.mark.parametrize.

Use pytest Fixtures and Features

For example, imagine we have an indirection where there are different types of Game implementations. We’d like to put the choice of which class is used behind a fixture, in conftest.py:

We can then use this fixture in the code>@given step when we instantiate a Game:

Prior to 2018.2, PyCharm provided BDD for Behave, but nothing for pytest-bdd. Admittedly, there are still loose ends being worked on. Still, what’s available now is quite productive, with IDE features brought to bear when getting in the pytest-bdd flow.

Forgot to implement a step? Typo in your @scenario text identifier? PyCharm flags these with the (configurable) warning and error infrastructure. 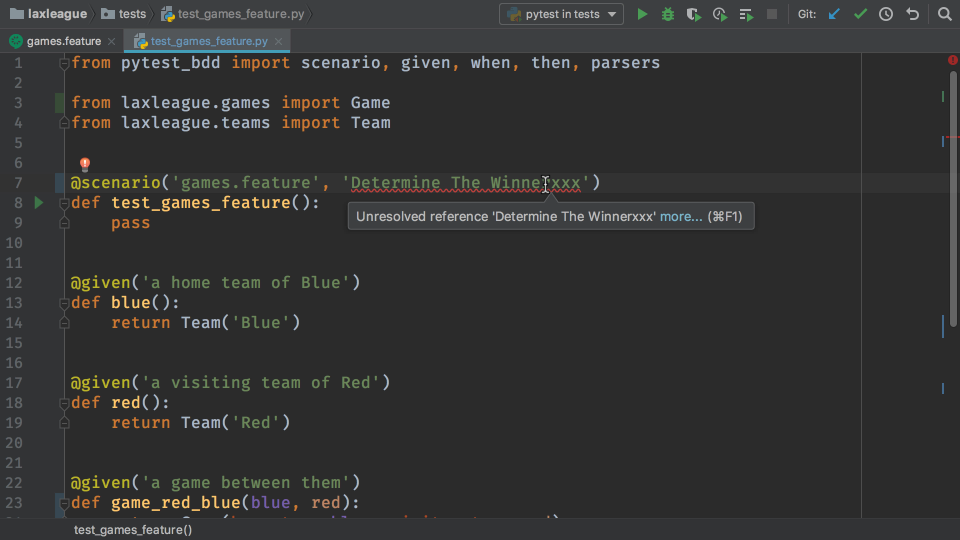 Obviously we autocomplete keywords from Gherkin and pytest-bdd. And as expected, we autocomplete function names as fixture parameters. But we also autocomplete strings from the feature file…for example, to fix the kind of error just mentioned for the scenario identifier. Also, parameters parsed out of strings can autocomplete. 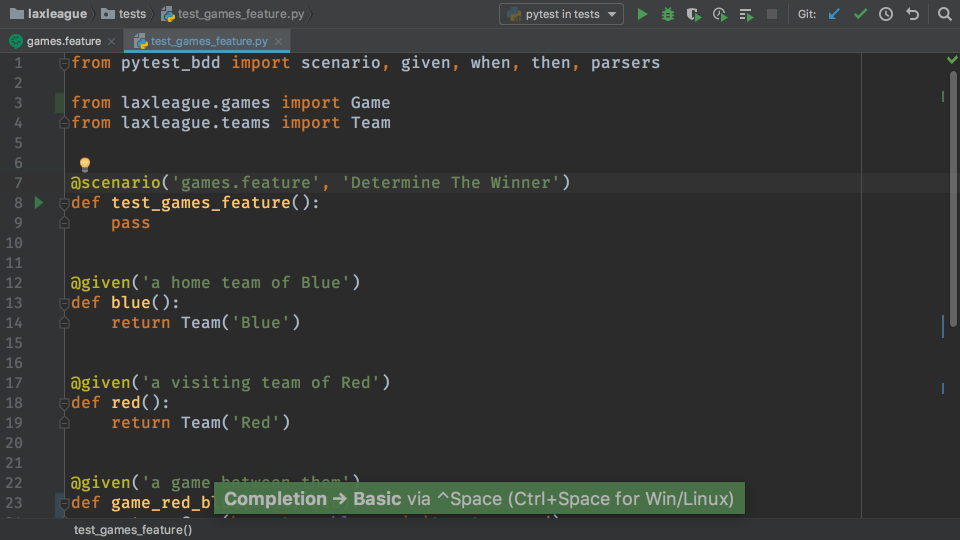 Wonder what is a particular symbol and where it came from? You can use Quick Info or on-hover type information with Cmd-hover to see more information: 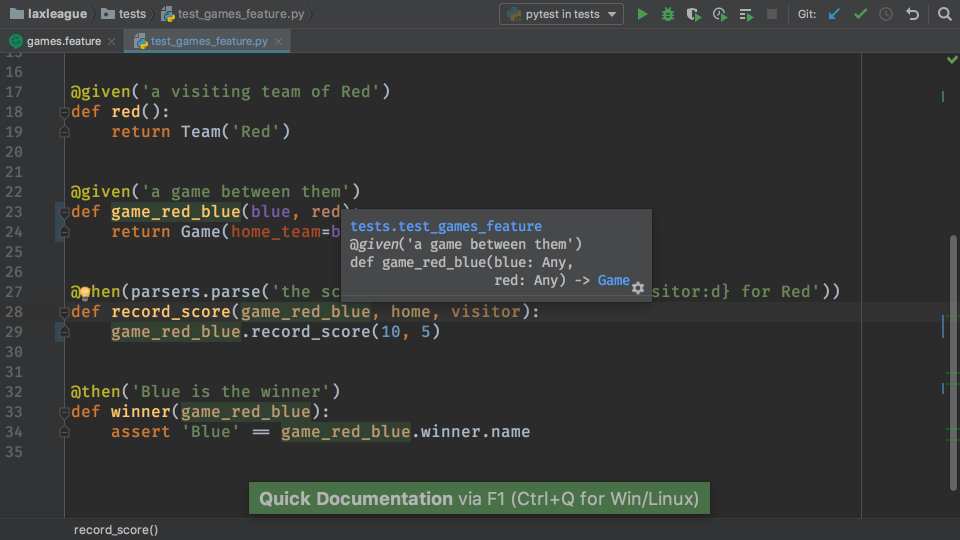 Doing behavior-driven development is a very different approach to testing. With pytest-bdd, you can keep much of what you know and use from the very-active pytest ecosystem when doing BDD. PyCharm Professional 2018.2 provides a “visual testing” frontend to keep you in a productive BDD flow.