Hone Your Craft with RubyMine 7!
News

Hone Your Craft with RubyMine 7!

“Give me six hours to chop down a tree, and I will spend the first four sharpening the axe.” Abraham Lincoln 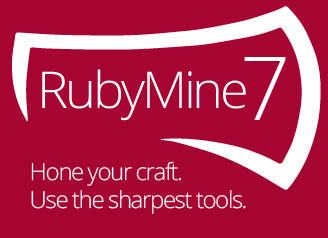 For all of us at JetBrains, being a developer means a lot more than everyday coding. It is also about being at the edge of knowledge and honing our programming skills. We try to keep our tools as sharp as they can be, kind of like the woodcutters from this poignant story. So, if an IDE is for a developer what an axe is for a woodcutter, with the latest RubyMine 7 update we want to make it razor sharp for you.

This major update polishes all of RubyMine’s subsystems, adding new features and enhancements to help you write and maintain your code:

You can buy or renew your RubyMine license on our website. RubyMine 7 is a free update for you if you purchased or renewed your license on or after November 13, 2013. As usual, a 30-day trial is available if you want to try RubyMine as your new Ruby on Rails IDE.

And last but not least…
We couldn’t have done it without help from all of our early adopters. A million thanks for your invaluable feedback!
—
Develop with pleasure!
JetBrains RubyMine Team

RubyMine 7 RC2 is AvailableRubyMine 7.0.1 is Out

Hi all, RubyMine 2022.1.1, the first bug-fix update for the current major version, is now available. You can update using the Toolbox App, right from inside the IDE, or by downloading RubyMine 2022.1.1 from our website. With this update we fixed the issues that were caused when Rails 3 support was discontinued. Please read our statement on the retirement of Rails 3 and other outdated features. You’ll find the following improvements in this update: The debugger now supports Ruby 3: RUBY-27310. Support for injected JSON in .liquid files is available: RUBY-27525, RUBY-28058. We fixed a

Dear all, As some of you already know, RubyMine 2022.1 was shipped without support for Rails 3. The reason for this decision was quite simple: Rails 3 reached End Of Life many years ago, and most of you had long since switched to the newer Rails releases. Hence, continuing to support Rails 3 in RubyMine simply didn’t seem practical given the amount of effort that would have been involved. However, we didn’t communicate this decision in a clear and timely manner, which resulted in reasonable questions from some of our users who still use Rails 3. We would like to apologize for that and assure

Hello everyone, RubyMine 2022.1 is now available! Below is a brief overview of the most notable features. For a detailed description of this update, please visit our What’s New page. Support for new language features RubyMine 2022.1 includes support for most of the new Ruby and RBS features introduced in Ruby 3.1, such as bounded generics, RBS collection, anonymous block argument forwarding, generic type aliases, and more. UX improvements The user experience has been refined with a redesigned New Project dialog, support for new Rails 7 generate options, and improvements for notifications, s