They say “with great power comes great responsibility.” Because of the IntelliJ Scala plugin’s huge user base, most default settings tend to become de-facto standards in the Scala community, so we strive to choose the defaults wisely. Moreover, we believe that sometimes such kind of decisions are worthy of detailed explanations, and subject to approval by the community.

As experience has shown, many introduced novelties are often misunderstood and criticized in the beginning. For example, method signature enforcement was initially touted as some quirk that only keeps getting in the way. But as time went by, those rules and the side-effect thing became “self-evident” in the Scala community, mostly because that’s how all this was intended in the language from the inception. In other cases, like with the deprecation of postfix calls (before SIP-18), we referred to Martin’s tweet as a justification. Because there’s no appropriate Martin’s tweet (yet?) for what we’re introducing this time, we dare validate the step by ourselves.

We’re expanding the notion of “code style” for Scala beyond the typical constituents like spaces, parentheses and braces. For a start, we have introduced a special set of configurable rules of when to add / enforce type annotations (check Settings / Editor / Code style / Scala / Type Annotations). Truth be told, we added those settings about 4 years ago, but only now did we pick up our courage to enable some of those by default (on the other hand, you can’t say we’re rushing it :).

From now on, the type annotation settings will be used in the following functionality:

In particular, we’re considering enabling the enforcement of type annotations on public methods, and we’re definitely expecting a mixed reaction to that. Why declare some result types explicitly? Well, we believe that it’s one of those places where tools can mend possible abuse of certain liberties in the language design. Here are the reasons:

Note: One possible exception to these rules are simple declarations like val answer = 42 where the result type is clearly evident, both for humans and for the compiler. Currently we’re determined to treat this kind of expressions separately.

So, adding explicit types to public methods can make our code cleaner and also speed up editing / compilation. Sounds good, doesn’t it? But what about tons of those “righteous” warnings, aren’t they supposed to be annoying? The good news is that there is a straightforward way to process them all at once:

Because the functionality is already present in all the Scala plugin builds, you don’t have to wait for it to be enabled by default: you can tweak the code style and try this out right now. Likewise, if you consider the undertaking to be too much of a hassle, just tweak the code style settings as you see fit.

At the next step, we will add many more options to the code style (currently listed as inspections), so that it becomes possible to choose, for example, what form of anonymous function definitions you prefer (person => person.name or _.name) or to require eta-expansions to be explicit (like f _), and so on.

We encourage you to try the feature and, as always, we’d love to hear your feedback!

All public methods should have explicit type annotations. Type inference may break encapsulation in these cases, because it depends on internal method and class details. Without an explicit type, a change to the internals of a method or val could alter the public API of the class without warning, potentially breaking client code. Explicit type annotations can also help to improve compile times. 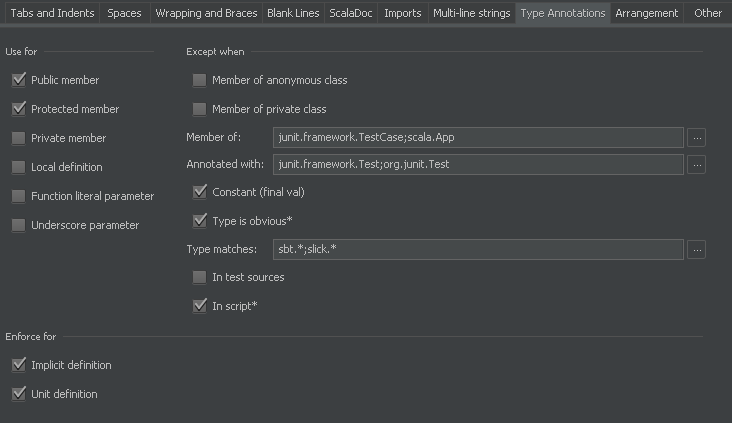 Tooltip for the “Type is obvous” checkbox:

One of the things IntelliJ IDEA is most famous for is its huge variety of helpful inspections and warnings. They make the lives of programmers significantly easier, frequently showing them errors in logic or style that they wouldn’t have noticed otherwise. Those inspections come in various shapes and sizes, ranging from simple pattern searches to highly sophisticated inspections that require to