The new Early Access build for CLion 1.2 (142.4859.12) is now available for trying. An update from the previous EAP build is also available.

Here are the most important changes and fixes addressed in this build. The most notable improvements are:

CMake commands in upper and lower case
The names of commands in CMake are case insensitive; the usual convention is to type the command names in uppercase. If you still prefer lower case for CMake commands or mixed style, use new setting in Editor | Code Style | CMake | Other to select the preferred variant: 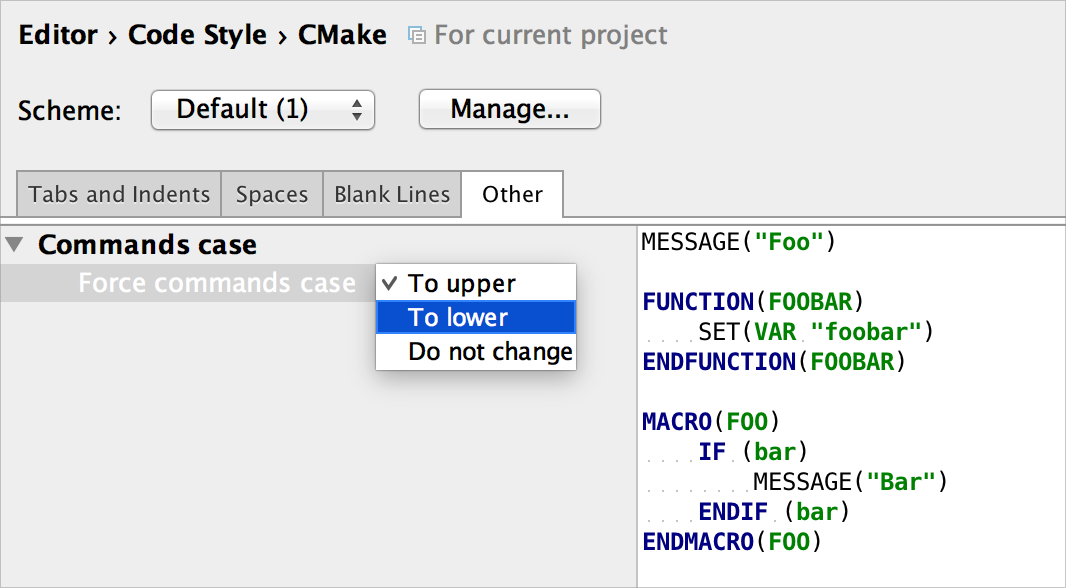 This setting affects the CMake commands completion: if you select ‘To lower’, then only lower case options will be suggested to you. And vice versa:

In case of ‘Do not change’ the result depends on the case of the first symbol you’ve typed.
The setting also affects the result of code reformat (Ctrl+Alt+L on Windows/Linux, Alt+Cmd+L on OS X).

__LINE__
Macros __LINE__ is used widely in Unreal Engine 4 code and many other projects. New CLion EAP parses this macro definition correctly. (However, some issues are still left – CPP-4451)

LLDB on OS X version
The version of LLDB bundled into CLion on OS X is updated to 3.7 in this EAP.

Perforce
In case you are a Perforce user you’ll be glad to learn that CLion now allows you to shelve changes in Perforce from the UI. Shelve the changes by invoking Shelve in Perforce… action, browse perforce shelf and unshelve it anytime you want.

Sincerely yours,
The CLion Team