The Developer Ecosystem in 2018: Key Trends for C and C++

For the second year in a row, we have polled thousands of people to learn what’s hot and what’s not in the world of developers in 2018. The Developer Ecosystem survey aims to reveal which technologies are trending today, how languages are evolving, and which tools developers are adopting the most. The results are finally in, so go ahead and get the full scoop!

Later we will also publish (anonymized) raw data for everyone interested in taking a look for themselves. Now, let me share the most interesting findings from this year’s study relating to C and C++.

For C, the most interesting questions are about the tooling being adopted, while for C++ we were squirming to know “Which C++ standard do developers mostly use?”. Since this is a second such study, we can also compare the results to those from 2017 and identify some fascinating trends.

It seems that among all the respondents developing in C, 48% have abandoned all unit testing frameworks. This is a hike of 18% compared with last year. In contrast, among C++ developers the abandon rate soared by 20% this year. If we speculate about why this is happening, could it be that unit testing frameworks don’t fit the C/C++ developer ecosystem? Is the entry level too high? Or maybe there’s a lack of documentation and learning resources? What’s your take on this?

Makefiles were probably expected to come in as the most popular project model, but second place now goes to CMake (among C developers). Interestingly, Xcode project model has moved up from 5% to 9%. 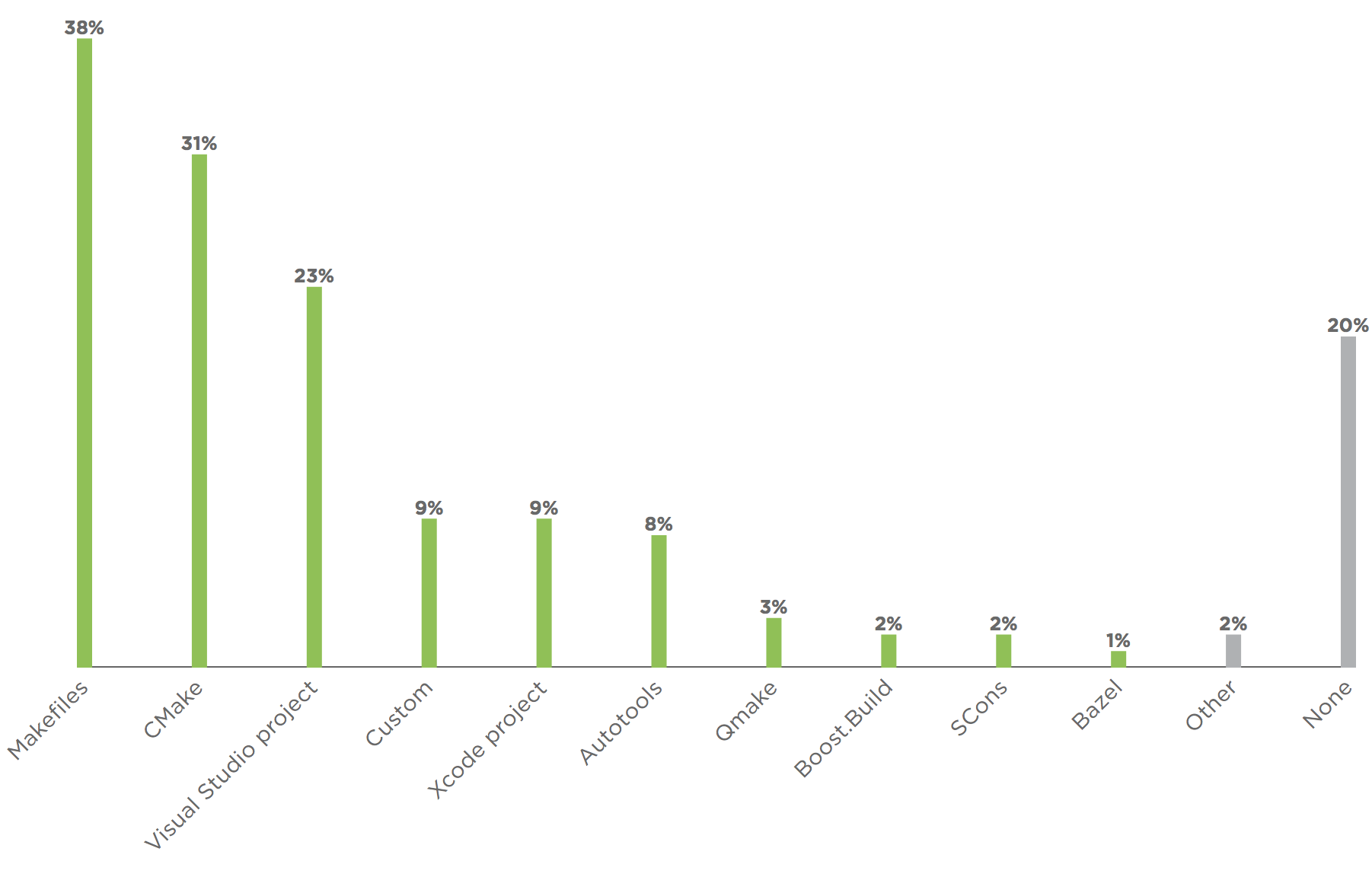 In terms of IDEs, both CLion and Visual Studio Code have gained a lot of popularity among C developers. Still, the top honor this year goes to Vi/Vim! By the way, if you’re accustomed to Vim, you can install a Vim-emulation mode in CLion to benefit from familiar Vim key bindings and the functionality of CLion at the same time.

Talking about other languages, it’s worth mentioning Java and Python as the languages most frequently used together with C++, as well as Rust, which 8% of C++ developers plan to adopt / migrate to in the next 12 months. If you’re looking for a Rust IDE, try the Rust plugin for CLion, which comes with Cargo build system and debugger support!

What do you think about these trends? Sound off in the comments section below!

Hi all, Welcome to the January edition of C++ Annotated and its companion, the No Diagnostic Required YouTube show! You can read us, listen to us, or watch us! Here’s how: Read the digest published monthly on this blog (use the form on the right to subscribe to the blog). Subscribe to C++ Annotated emails by filling out this form. Watch the No Diagnostic Required show on YouTube. To stay tun

Hi all, Welcome to the newest edition of C++ Annotated and its companion, the No Diagnostic Required YouTube show! They are now available in the following formats: The regular digest published monthly on this blog (use the form on the right to subscribe). C++ Annotated emails, which you can subscribe to by filling out this form. The No Diagnostic Required show here in the blog or on YouTube

Hi, Welcome to the newest edition of C++ Annotated. We have some exciting news for you – from now on we’ll be publishing monthly! Plus, in addition to the regular digest, we’re launching a YouTube show called No Diagnostic Required, hosted by Phil Nash, JetBrains Developer Advocate, and myself, Anastasia Kazakova, JetBrains C++ Tools PMM. And we’re going to do a podcast too! This means that C++ An

JetBrains has carried out its Developer Ecosystem survey for the fourth year running. It’s definitely now more than just a snapshot of a technological landscape – it’s a timeline that illustrates the evolution of the landscape. With a core set of questions that repeat yearly, it gives us not only a useful look at the current state of the ecosystem but also a more general and highly valuable overvi