Support for C++20’s Concepts in CLion

Concepts are one of the biggest features coming in C++20, and knowing that, we’ve been thinking about supporting Concepts in CLion for quite a while. Enter Saar Raz with his C++20’s Concepts implementation in Clang! Long story short, we have been collaborating with Saar to merge his branch into our custom Clangd-based language engine in CLion, and started implementing some nice IDE features on top. Sounds ambitious enough, but we have thoroughly enjoyed the experience so far! A very early result of this collaboration was used by Saar in his CppCon 2019 talk on Concepts:

We do recommend watching this talk in full to learn how Concepts can be useful, and whether you should care about them even if you’re not using metaprogramming in your daily work.

Now, we are ready to present the C++20’s Concepts support in CLion, available to all the 2019.3 Early Access Program users! Just grab a build and give it a try.

How to get C++20’s Concepts working in your project

All three major compilers are now using the corresponding support:

In CLion, you should have Clangd-based engine turned on, including code completion from Clangd (which is on by default in Settings/Preferences | Languages & Frameworks | C/C++ | Clangd).

Here comes the most intriguing part – what is actually supported in CLion? There are four major areas:

First of all, CLion can now parse and highlight the Concepts correctly, as we’ve merged the Saar’s Clang Concepts branch into our internal Clangd-based language engine. No more false positives are produced on code with Concepts. All the syntax forms for concept and requires from the standard are supported: 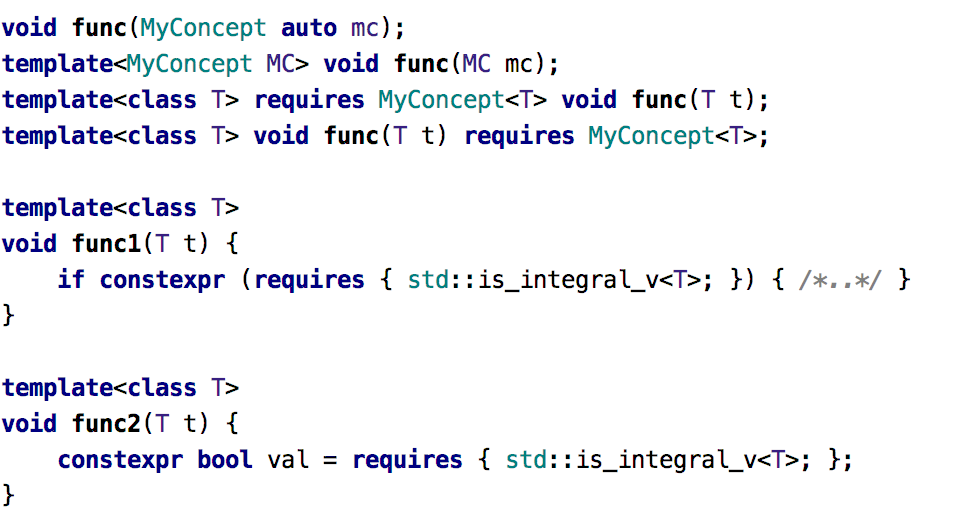 The code highlighting settings for Concepts can be found and customized in Settings/Preferences | Editor | Color Scheme | C/C++ | Concept.

Several code inspections with quick-fixes are available for code using Concepts. Some checks are provided by the compiler, such as:

Note that completion on T in std::is_base_of<MyBase, T> and std::is_same<Other, T> will offer available suggestions from MyBase and Other, respectively. But CLion does that only when possible, which means MyBase and Other have to be some concrete types. If template type is used instead, currently no completion is available.

For Concepts in this EAP build, we support the Rename refactoring and navigation actions like Go to Definition and Find Usages.

This is still a work in progress on both ends, in CLion and in Saar’s branch, which means you might run into various issues. Hopefully, they only concern Concepts and should not affect you if you are not using C++20’s Concepts in your code.

Some known issues of the current C++20’s Concepts support in CLion:

Give Concepts support a try in CLion and let us know what you think!

Developing for ESP32 With CLion on Windows

This tutorial shows how to set up a project in CLion for ESP32 development on Windows, covering all the necessary steps in great detail.