Want to Flash and Debug an MCU Over the Air? Just Use Your Raspberry Pi 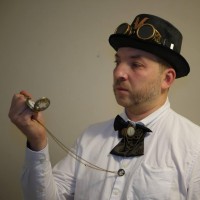 How do embedded developers set up everything they need to do programming? A typical wired setup includes a device that stays on the developer’s table, and a ribbon cable that connects it to a debug probe, which in turn is connected to the developer’s computer by a USB cable. The computer is running probe-specific software and an IDE.

In many cases, this setup works fine. But embedded devices work with real-world objects. Sometimes an MCU-based control board manages high-voltage or dangerous equipment. Sometimes it’s mounted outdoors. The equipment could be moving on wheels, or floating on the water. It could even be mounted in a remote location. Using a cable setup in these cases is generally inconvenient and could even be dangerous.

When I started developing an outdoor device, I immediately encountered this problem. What could be done? I took stock of what I had available to me and found a Raspberry Pi board. I have spent several hours setting it up as a wireless debug probe, and now it works like a charm.

Every ARM-based MCU has a two-wire debug interface (SWD) and a reset line. These three lines are supposed to be connected to a debug probe. In my wireless setup, I use my Raspberry Pi GPIO pin header to connect directly to the device. On the software side, my Raspberry Pi is running the open-source on-chip flashing and debug utility OpenOCD as a remote GDB server, and I connect a debugger, bundled with the CLion IDE, to it over Wi-Fi. Open network communications might be unsafe, so I wrap a TCP channel between GDB and OpenOCD into an SSH tunnel. Here’s a schematic representation that captures the differences between these two setups.

Which board is better suited?

In my setup, I used Raspberry Pi Zero W, and I think it’s a very good option. It’s small. It already has Wi-Fi on board. It consumes relatively little energy. It does not need a fan for cooling. It’s sold everywhere. And it’s fast enough to do the job. But, this board has a couple of disadvantages relative to RPi 2+. It has a slower CPU, and setting it up from scratch might take longer. Further, RPi Zero W only supports 2.4GHz Wi-Fi networks, not 5GHz.

You can use whichever Raspberry board you prefer. The only major differences are the network setup and the OpenOCD configuration parameters that need to be adjusted: bcm2835gpio_peripheral_base and bcm2835gpio_speed_coeffs.

First of all, we need to get our Raspberry Pi up and running, and connected to the Wi-Fi network. This requires an empty SD card, and 4 GB should be sufficient.

The very first step is to copy an OS image to the SD card. The best choice is Raspberry Pi OS (32-bit) Lite. You can find the official installation instructions for Windows, Linux, and MacOS here.

Once the image has been written to the SD card, the next step is to ensure that the board will connect to a Wi-Fi network. Eject and insert your SD card back into the reader, and then follow these instructions for setting up Wi-Fi headlessly. (Note that RPi Zero W only supports 2.4GHz Wi-Fi.)

Now write a file named ssh to the SD card’s root folder. The content of the file is not important, and even an empty file will do. This will activate the ssh server for remote access when Raspberry is booted. More details.

Now we can insert the card into Raspberry Pi and turn it on. If everything is done correctly, in a couple of minutes the board will appear as a new Wi-Fi device in the network. Its IP address can be found on the Wi-Fi router DHCP status page. I’d recommend setting up a permanent IP address for the board there. In my case, it is 192.168.0.110.

To take control of the board, we need an ssh client. Use the ssh utility on Linux and MacOS or putty on Windows:

The default password is raspberry. We highly recommended changing the password as soon as you log into the board. Use the passwd command to do so.

The next step is to update Raspberry OS. This is time-consuming, but I’d recommend doing it anyway. It’s best to keep all the Linux software up to date. The commands:

will do the trick. Reboot the board (sudo reboot), and log back in using your new password.

Since there isn’t a pre-built binary package of OpenOCD for Raspberry, we need to build it ourselves. This process could take some time, so please be patient.

First of all, Git, build tools, and libraries must be installed with the following command:

Now we need to download the OpenOCD sources. For our purposes, we only need the latest revision, and a shallow clone of the Git repository should be sufficient. The following command will make that clone in the openocd-git folder:

Let’s configure, build, and then install the actual utility. The commands in the following sequence should be called one by one:

Once these commands have finished running, OpenOCD is ready.

OpenOCD is a utility for in-system programming and on-chip debugging. It supports a number of various microcontroller cores and different flashing interfaces and different protocols. OpenOCD uses three types of configuration files:

We are not going to touch the cores, but we do need a probe interface configuration. The following command creates such a config, named rpi1-gpio.cfg, at the pi user home.

From the configuration file above we can see the GPIO header pinout:

And there’s one final, optional step. It can be easy to forget the pinout of the wireless probe, but we can make an easy reminder. The following command adds a login banner with the pinout.

The next time we forget the pinout, we can just log back in the Raspberry and it will be displayed on the banner.

Now we’ve finished setting up the Raspberry software. We’ll next move on to look at the hardware and the firmware example project. But before we do, there’s one last point we need to consider.

Setting up the example project

The CLion IDE and an ARM embedded toolchain are required to try the example. Instructions for setting them up can be found here and here, respectively.

For the example project, I’m going to use the MCU soldered onto a STM32F3-Discovery board, but with RPi instead of the on-board ST-LINK interface. The example project can be cloned from a GitHub repository. The project is written in C and C++17.

First, I detach both jumpers from the “ST-LINK” connector. The on-board flashing probe is now disconnected from the MCU.

The target MCU for this demo is powered by the Raspberry Pi itself, using pin 2 of the GPIO header.

Note! If you make your own device, make sure your target device supports 5 V power supply voltage, and does not consume more than 200 mA. Otherwise, use some other power supply scheme. 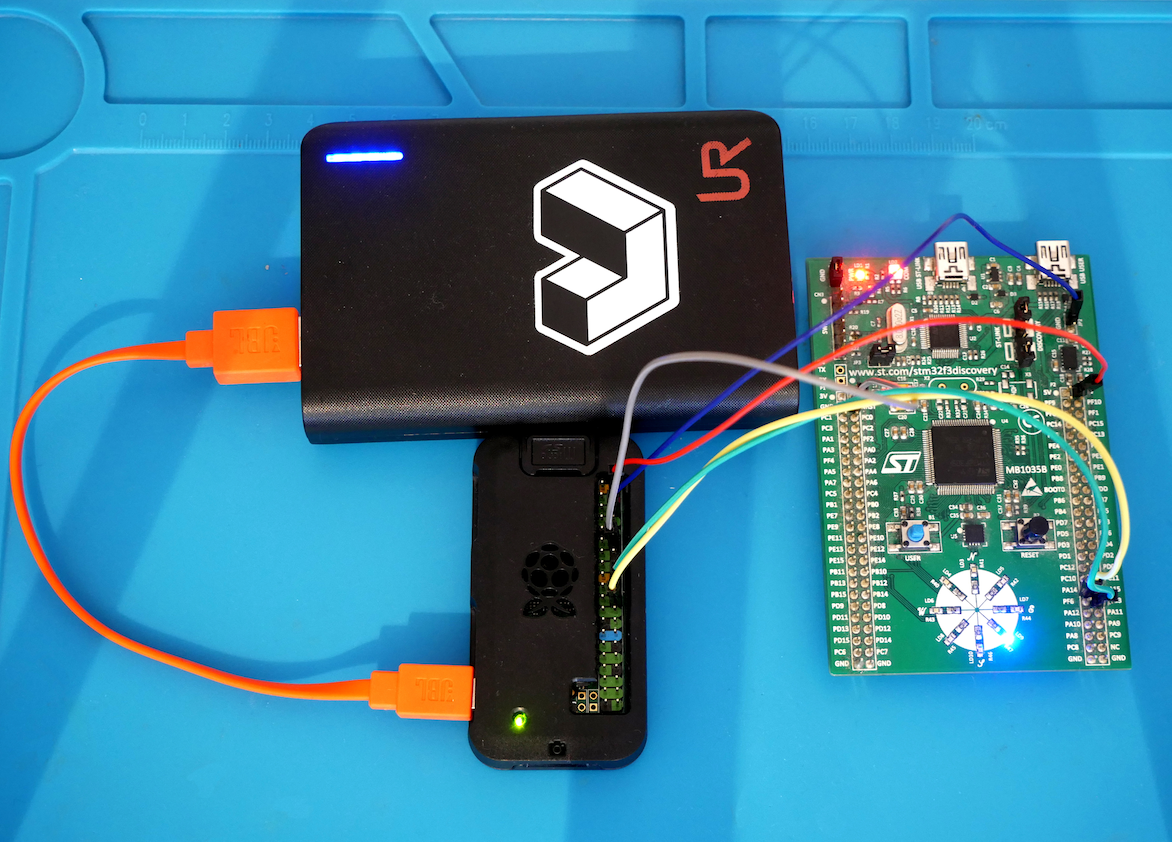 As you can see, no extra components are involved – only the target device, a power supply, RPi, and some wires.

Let’s start it up

The demo project is supposed to run the locally installed OpenOCD and use a regular wired setup.

Let’s create an alternate run configuration of the Embedded GDB Server type with the following parameters:

Note that you have to use your own RPi IP address and password. Additionally, you may use a target configuration file that is not target/stm32f3x.cfg.

The GDB server args are the trickiest of these parameters. Let’s go over the various elements of them one by one. 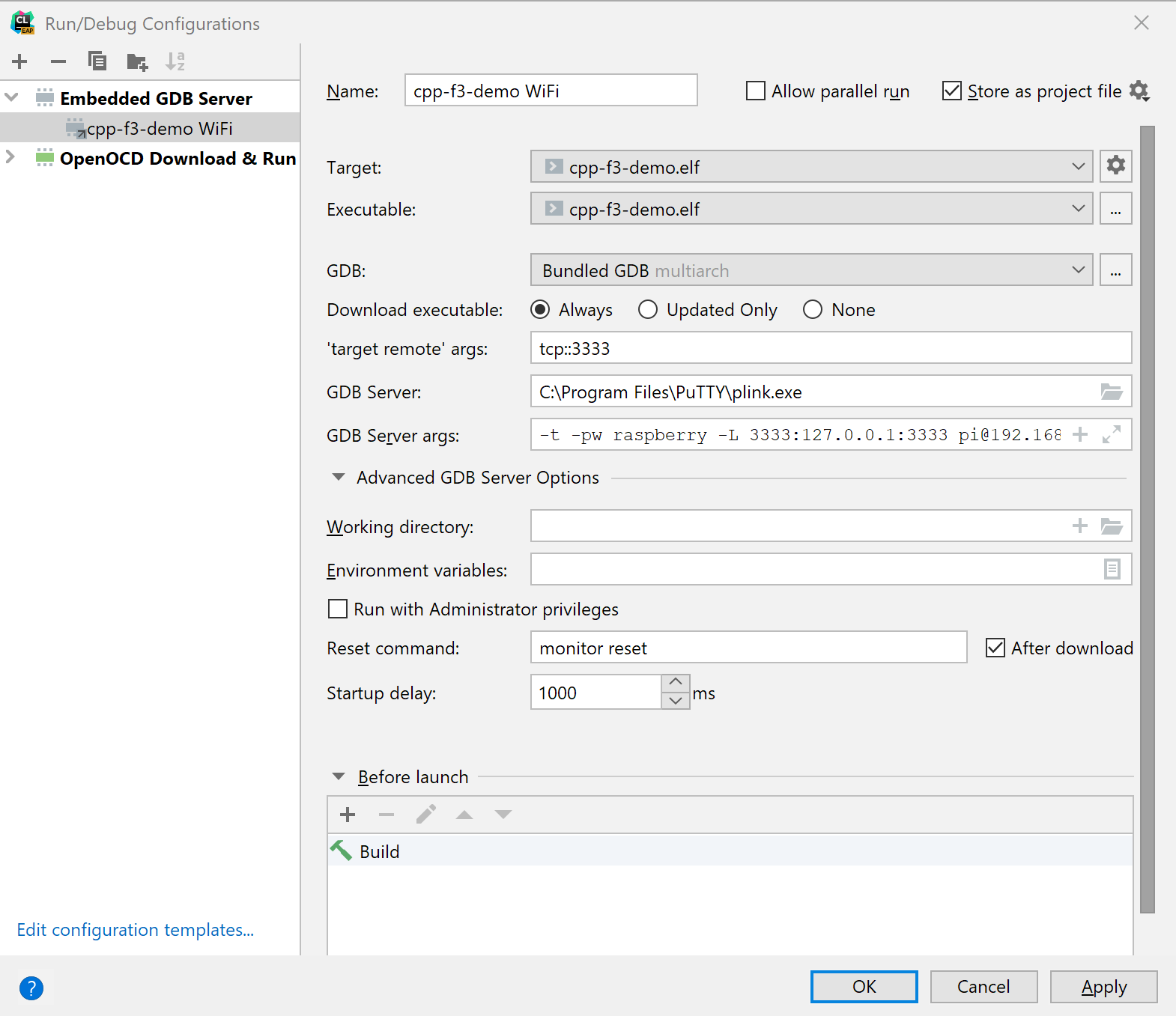 And we’re done! Just click the Debug button – the MCU firmware will be compiled and flashed, and the debugger session will start. 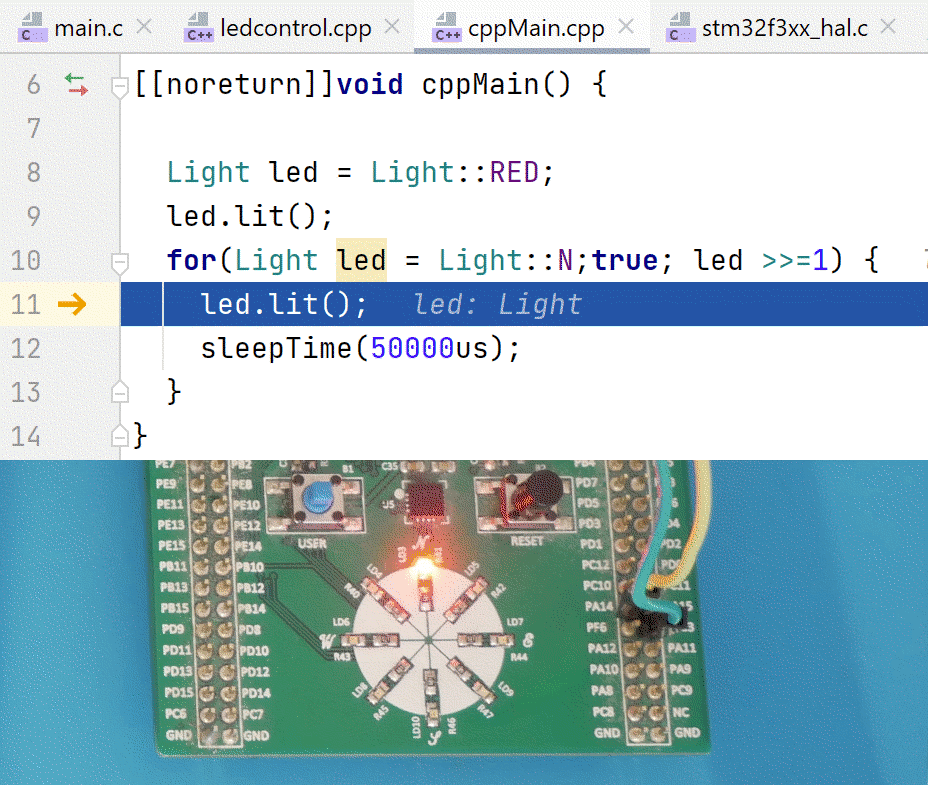 Have you noticed that on the pinout hint some additional pins are marked with typical JTAG signals? This was intentional, as the JTAG interface is also supported. Let’s put that JTAG interface to use.

For this example, I’ve connected a Longan Nano board powered by a GD32VF103 chip, which is a RISC-V kernel and thus has no SWD interface. 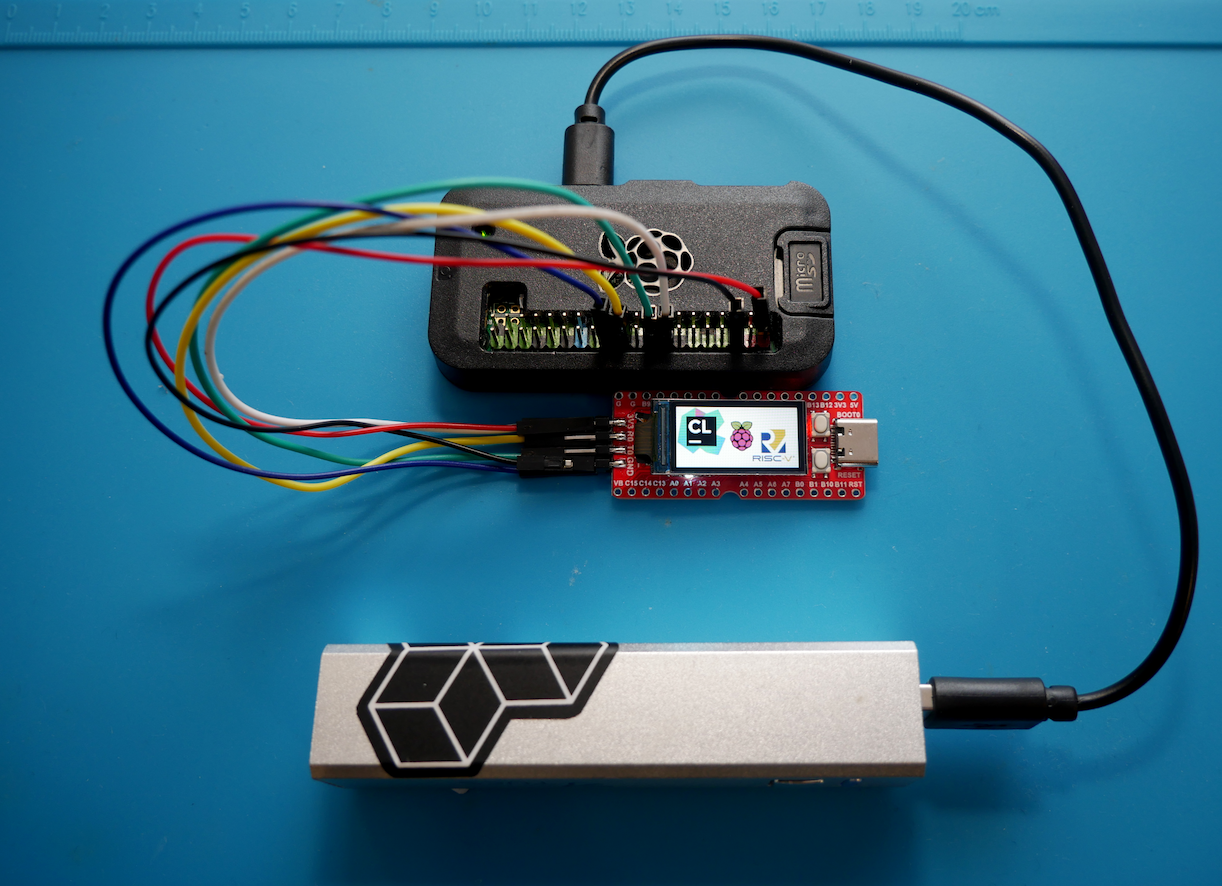 I used a Risc-V toolchain, downloaded from the xPack repository. The bundled debugger does not support Risc-V, so we’ll have to use the toolchains debugger. 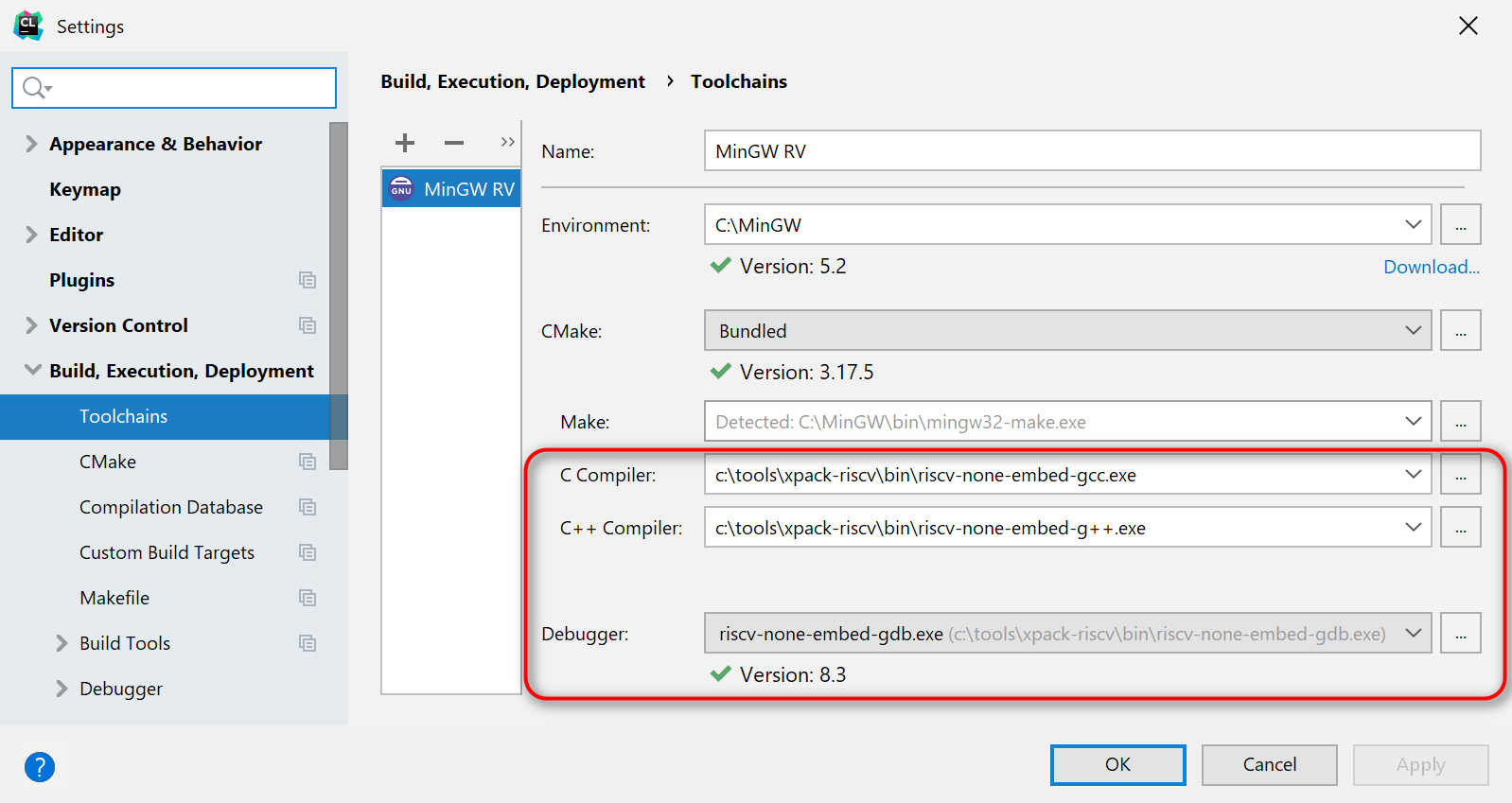 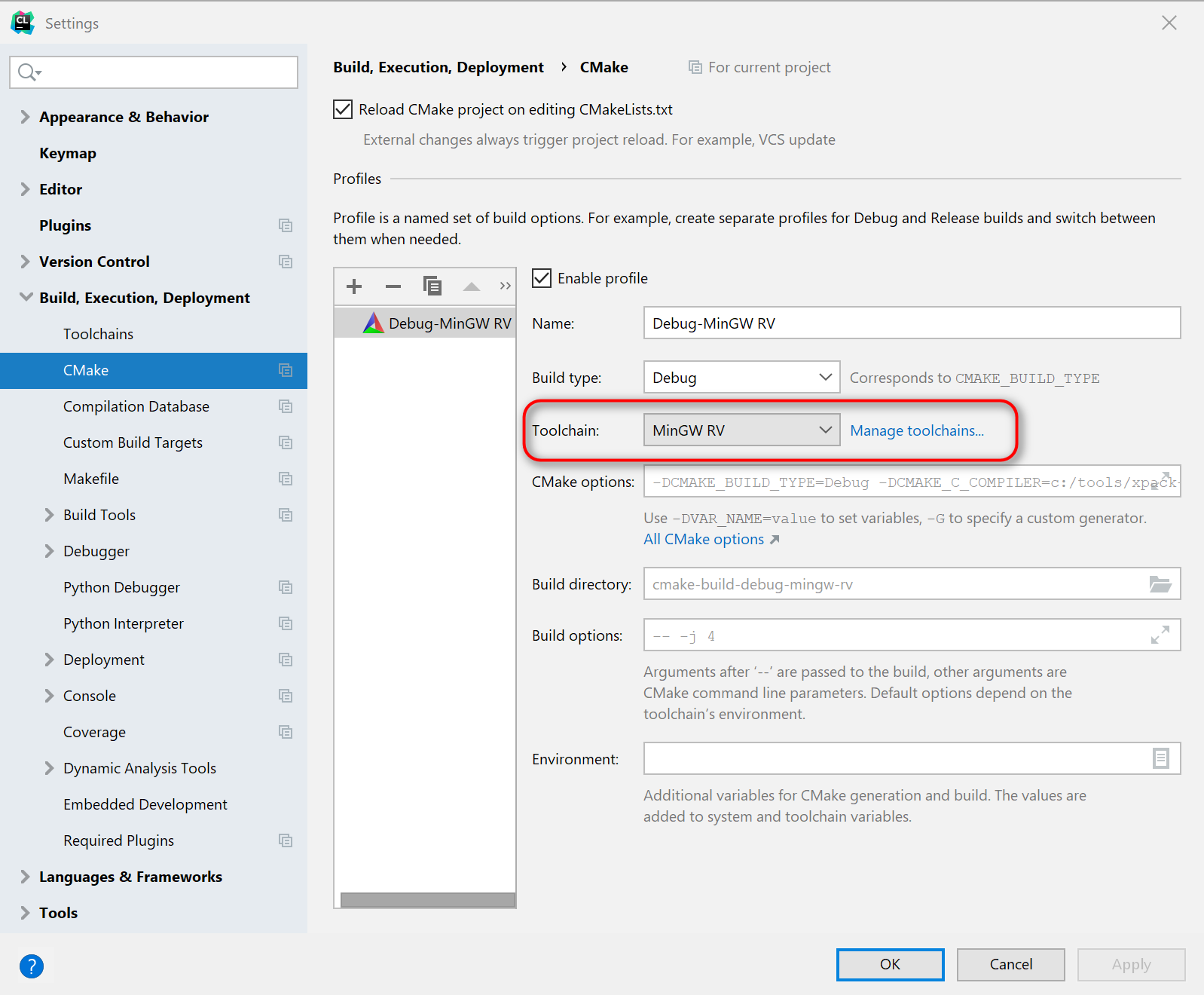 At the time of this blog post’s composition (March 2021), the master branch OpenOCD does not support RISC-V chips particularly well, so OpenOCD should be cloned from a specific Risc-V fork and built as shown above.

Now all you need to do is set your own password and RPi network address.

Raspberry Pi is a very popular and easy-to-use single-board Linux computer. It is usually used for DIY projects. OpenOCD is an open-source program for flashing, debugging, and testing microcontrollers, including ARM and RISC-V kernels as well as many others. When used together with CLion, these resources make embedded development easier, more comfortable, and even safer in certain situations. The wireless setup described in this blog post is suitable for both hobby projects and professional ones.