CLion is an IDE that offers a lot of features to help developers. It shows documentation popups, detects mistakes on the fly, suggests fixes, and more. An internal code analyzer always works in the background, analyzing C and C++ code as you type. C and C++ are challenging languages for automatic analyzers because compiler-specific data is required to parse the code correctly. The engine needs to know the header search paths, predefined macro definitions, and some other details.

For a predefined set of known compilers, CLion runs the project’s compiler with special options and gathers the required information while parsing the project. Of course, that only works for a limited number of compilers, like GCC, Clang, MSVC, IAR, and their derivatives. If a project uses a specific custom compiler, a rarely used one, or a proprietary compiler that we don’t have access to in order to integrate it properly, then CLion can’t work with it via its standard procedures. In that case, you have the option of using the Custom compiler feature.

To use a custom compiler with CLion, you’ll need a YAML file containing the necessary compiler data. Such a file should contain one or more sections, each of which describes a particular compiler or compiler variant. Each section should have a description, one or more matching records, and several informational records.

Once all of the matches are resolved successfully, the section information records are picked, and the rest of the YAML file is skipped. Compiler data is taken from informational records and then passed directly to CLion’s code analyzer; that is, the data is not collected during the compiler dry run.

If none of the sections provides information for the IDE to positively match the records to a specific compiler, it tries to collect the compiler data in its usual way – by guessing the compiler’s type and running the compiler.

How to write a custom compiler YAML file

To get started writing the custom compiler YAML file, you’ll need to identify the following details about your compiler:

Let’s put this process into practice by writing a custom compiler YAML file for SmallDevice C Compiler (SDCC). SDCC supports several 8-bit CPU architectures such as STM8, Z80, and others. The compiler is open-source, and it’s the only free compiler for several MCU families. In this example we’ll write a YAML file for its Microchip PIC-16 variant (port).

Here are the details about this compiler that we’ll need to know:

We’ll start by creating a test project. The very minimal project contains a C file, the YAML file itself, and a build system file. We’ll use Makefile. If C++ is supposed to be used, then another source file written in C++ should be added, as well.

First of all, create a project folder and create an empty Makefile inside.

Open the folder in CLion and then click Cancel on the Load Project dialog that pops up.

Open Makefile in the CLion editor and add the minimal content into that Makefile:


The file now contains a single compilation command for main.c into assembly with no further steps.


For now, we only match by name. It is a regular expression matching both Linux and Windows compiler binary names regardless of the containing folder.

In the Tools menu select Makefile | Clean and Reload Makefile Project. If everything is OK, the Build tool window will show that the project has been loaded successfully.

If the project is not loaded correctly, you should double-check the match-compiler-exe statement in the YAML file. The record value is a regular expression, and it is the most fragile part of the process. Please refer to these examples in case of problems.

Now let’s check whether CLion has indeed picked up on SDCC and our project works as expected.

Check that the custom compiler works

Open main.c in the editor. It’s OK to see some errors at this point. Go to Help | Diagnostics Tools and select Show Compiler Info. This opens a diagnostics page with compiler information for the file being edited. Here you can see the compiler kind (“Custom Defined Compiler”) and the detected compiler description (“SDCC for PIC-16”). This means CLion is aware of the project structure, but the code analyzer doesn’t yet have the required compiler data and therefore shows various errors in main.c. 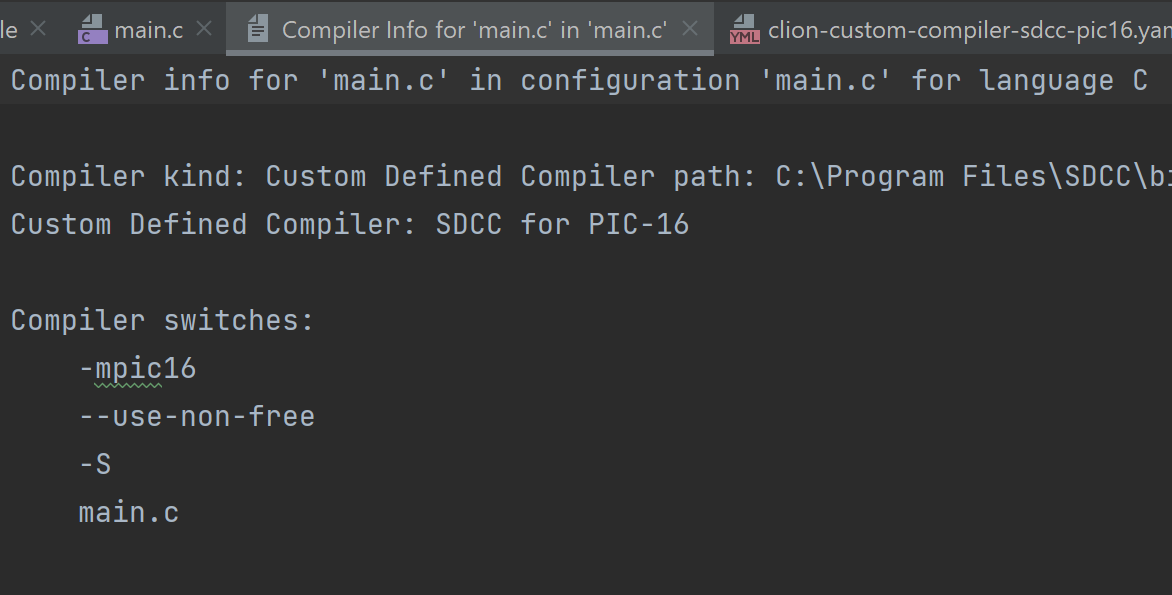 Our main.c file looks broken at the moment. stdio.h is not found, printf is undefined, the __code modifier is wrong, and no predefined macro from the documentation is defined. 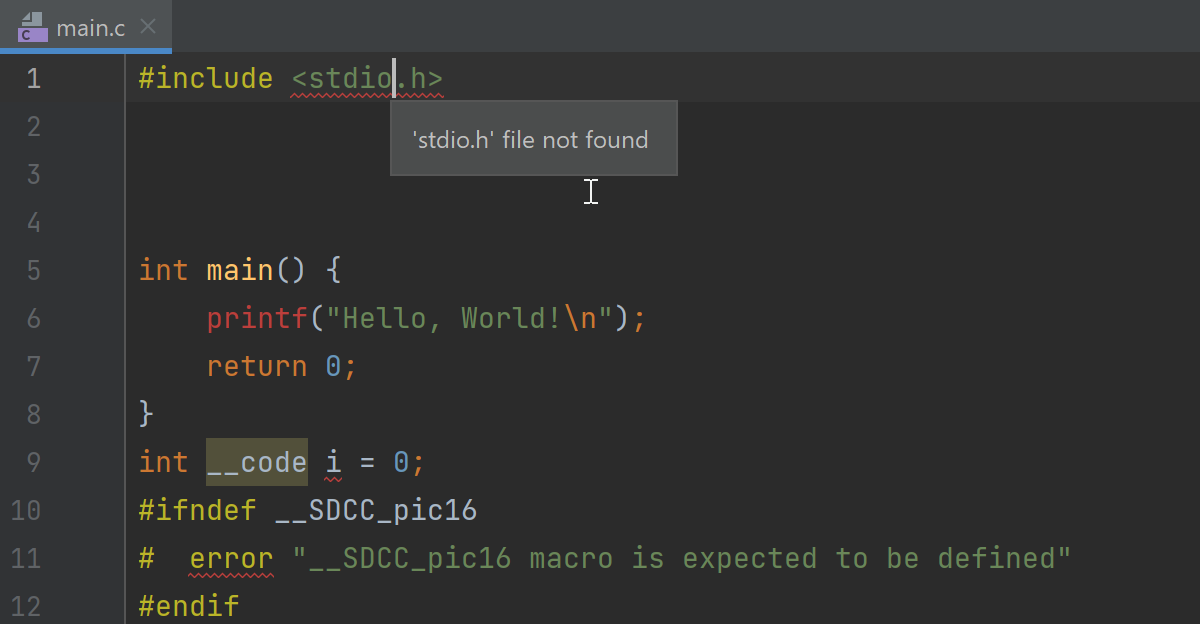 Let’s fix all of that by providing the correct compiler information.

Fortunately, SDCC can print both header locations and predefined macros. Adding the following lines to Makefile will do the trick:


Now we need to build the gather_info target and look at the output. First, there is a list of header search paths:

The only issue is that those paths are absolute paths. For portability reasons, let’s make them relative to the compiler location and add them to the compiler definition as an include-dirs array.

Next up are predefined macros. They are printed at the very bottom of the output. They can be added to the YAML file via defines-text.

Last but not least, we need to make our compiler matching a bit more specific by using match-args: -mpic16 and match-language: C statements, and then add SDCC language extension words as empty defines. Once we do, the final YAML file will look as follows: 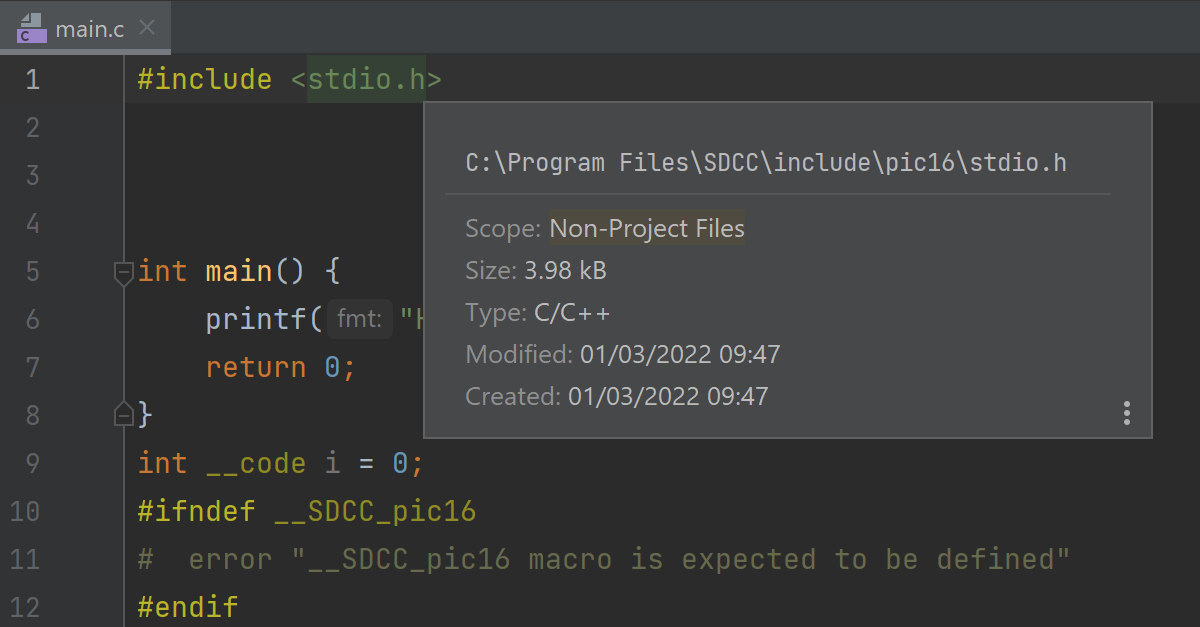 The errors are gone, and it’s possible to navigate to stdio.h. The Show Compiler Info window displays the correct information – both predefined macros, language features, and header search paths.

This final YAML file can be found on GitHub.

That’s it! Try out the Custom Compiler feature for your customer compiler and tell us how it worked for you. Pull requests to our compilers support collection are more than welcome!