If you’ve already given a shot to a recent IntelliJ IDEA 15 EAP build, you might have noticed changes in the UI for running tests. Today, as we’ve released a new EAP build with even more bugfixes and enhancements, the new UI is ready for preview.

IntelliJ IDEA supports a variety of test frameworks: the first was JUnit, then TestNG (developed initially by Hani and Mark) following by non-Java frameworks for Ruby, PHP, JavaScript, etc. The Java frameworks used to have one UI, and the frameworks added later introduced another one. Maintaining different UIs (as well fixing the same bugs in several places) is a mess. That’s why we’ve decided to re-write all the different UIs to share a common protocol. However we haven’t stopped there and added a few improvements to the new UI.

A separate table with statistics required too much space and you needed to switch it on and off. Now durations are shown right in the tree. Sorting gets available after tests have finished. 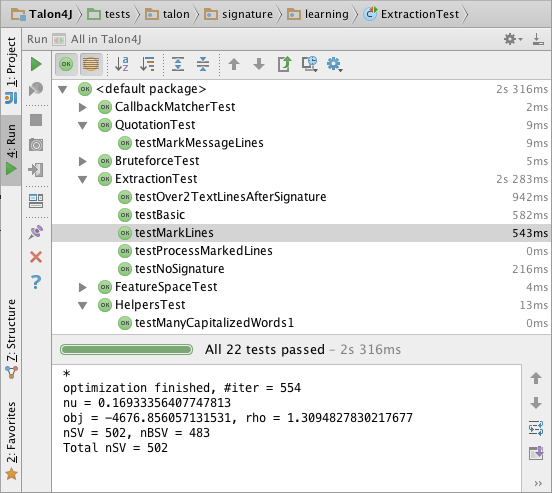 Because the console was on the right of the tree, horizontal orientation was the only one available. Now if you move the Run tool window to the left or to the right, the UI would be adjusted accordingly.

Once a tab with test results is pinned, the results would be preserved until you close them directly. But it’s very easy to forget to pin it, and to loose a lot of time re-running the tests once again. Now results are saved to the history automatically. 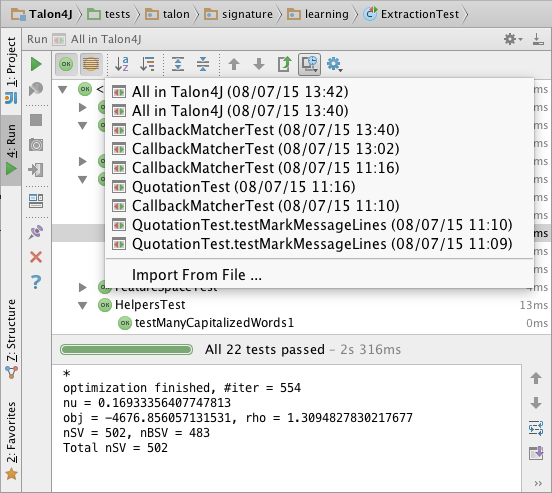 Test results restored from history look the same as those that were actually run, the actions remain available; and you can export/import the results to/from a file.

We hope you’ll enjoy the new UI! You’re welcome to give it a try by downloading the new build, and share your feedback with us in the EAP discussion forum and our issue tracker.