In Part 4 of our Spock tutorial, we look at mocking and stubbing. The Spock framework has mocking and stubbing built in. Creating, using and verifying mocks and stubs is nicely aligned with the way the tests are written, and can lead to very readable tests.

Sometimes we need to mock out classes or APIs to assert the expected behaviour. Mocking is built in to Spock, we don’t need a separate library or framework for Mock support. It’s also possible to mock concrete classes. If you’re used to other Mocking frameworks you might expect to only be able to mock Java interfaces, but Spock lets us easily create a mock from a concrete class.

The given block of a Spock test is the perfect place to set up mocks for our test. It’s clear then that this is all code that’s required to run the test, but is not the code that’s being tested itself.

This test mocks a Renderer class, which is a concrete Java class. We can do this either by declaring a variable with type Renderer, and calling Mock without any arguments:

…or if we prefer to use Groovy’s def to define our variables, we’ll need to pass the type in as an argument to the Mock method:

Bear in mind that if you declare it using “def”, this variable is using Groovy’s dynamic typing, and so isn’t strongly recognised as a Renderer type by the IDE or by the code. This is fine if you’re not doing much with the mock, but you might sometimes want to specify the type more clearly, this will certainly be more natural for Java developers.

The given block also sets up a Polygon with the given renderer, calling the constructor with the numberOfSides and the mocked renderer.

The when section defines the call that’s actually the thing we’re testing, in this test we want to see what happens when we call the draw method on this polygon. Make sure there’s a draw method on the polygon, at this stage it can be empty because we’re doing a bit of TDD:

Run this test now, it should fail. This is because the methods don’t do anything yet. We expected to see this drawLine method called four times, but it wasn’t called at all. 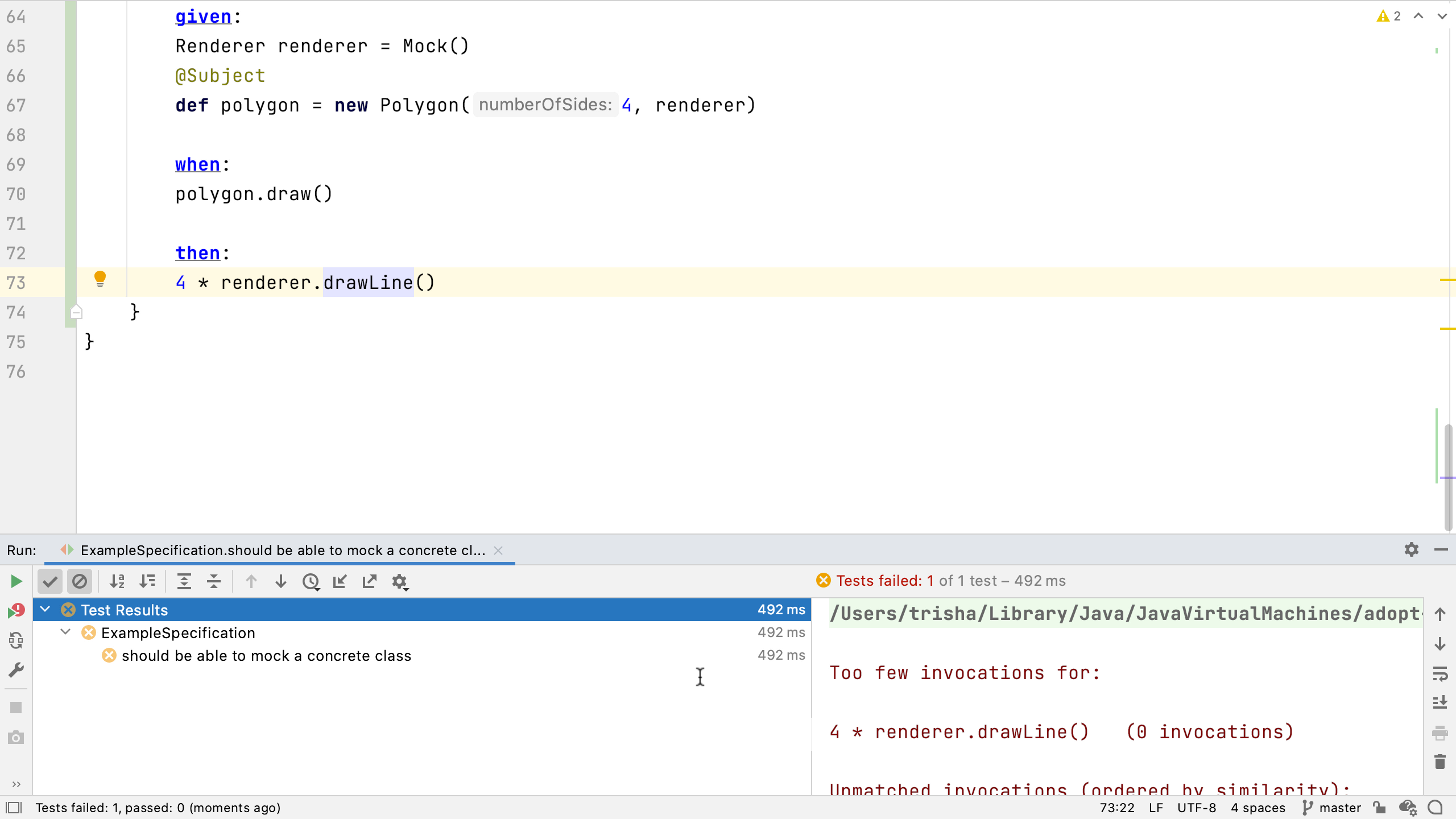 Go into the implementation of the Polygon.draw method and change it to call the renderer’s drawLine method in here as many times as there are sides (note that this is an extremely over-simplified example to demonstrate the testing):

Re-run the test, it should pass. The code is calling drawLine on the renderer mock four times.

Mocks are a powerful and useful tool to make sure that the code that we’re testing is calling the APIs that we expect, in the way we expect.

Let’s see an example of a stub in a new test method.

The given block sets up the preconditions for the test. This time, we’re going to use the Stub() method to create a Stub of the concrete Palette class. Like with Mock(), you can define it this way, or use def and pass the type into the Stub() method.

Next the test sets up the palette stub with the values it will produce when called by our code. We use right-shift (>>) to state that when the method getPrimaryColour is called, the Enum value Red will be returned.

The last step of setup is to create the Renderer with this stub palette. If you’re following along with this code in the IDE, make sure your Renderer looks something like:

Once again, we can use test-driven development here – we can use the test to drive out what we expect the methods to look like even if they don’t exist yet. Use ⌥⏎ (macOS), or Alt+Enter (Windows/Linux), on any red method names to get IntelliJ IDEA to create the most basic methods that makes the code compile, then run the test.

It should fail if we haven’t implemented the details for getForegroundColour. It’s good to see the test fail first, it often indicates the test is checking the right thing, even if that right thing hasn’t been implemented yet.

Change the getForegroundColour method to return the palette’s primary colour.

Re-run the test, it should pass. The test injects a Stub palette into the renderer, we tell the stub palette what to return when the getPrimaryColour method is called, so we can check that the renderer does what it’s supposed to do when we call getForegroundColour.

If we had set this up as a Mock instead of a Stub, this would have worked as well. Mock objects support the mocking behaviour we saw in the previous test and the stubbing behaviour we saw here, whereas Stub objects only support stubbing, and not mocking. My preference is to keep stub and mock behaviour separate where possible, so it’s usually best to use Stubs just for stubbing and Mocks only for mocking.

In this blog, we looked at mocking and stubbing. Now you know how to: