We’ve reached our sixth milestone, and with it, have some great features in store, both in terms of language improvements as well as tooling.

We have completed the initial support we provided for calling Java interfaces with Single Abstract Methods in M5.2. You can now simply do

and is now on any SAM interface (i.e. Callable(), Comparator(), etc.). The Runnable function is still available for those cases where required.

You can now have annotations with arguments of type enum, as well as arrays and the possibility of passing in a variable number of arguments with vararg.

where Side can be an enum

We covered Static constants in Kotlin previously. With this release, you can now use class objects and have their properties represented as true static fields in Java to assure 100% interoperability.

For those of you using Maven, you’ll be pleased to know that Kotlin is now available on Maven Central. Snapshot repository has also been moved to oss.sonatype.org. For more information about Maven support please see the documentation on Maven support.

You probably heard the news a few months back that Google has been working on a new development IDE called Android Studio for developing Android applications, based on IntelliJ IDEA Community Edition. With this milestone, we now provide support for this IDE. You now have all the functionality you get for Kotlin in IntelliJ IDEA, in Android Studio also. 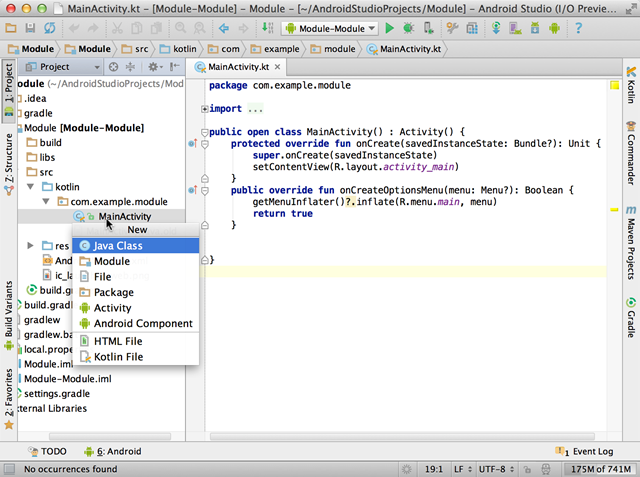 We’ll be taking a more in-depth look at Android Studio support including how to set up Gradle in to work with Kotlin as well as laying out the project in a separate post.

In addition to supporting Android Studio, we also have some new IDE refactoring available in M6.

You can make a variable inline with a simple key press.

As you know, Kotlin allows properties to initialized on the declaration. IntelliJ IDEA now allows us to easily refactor this to two separate expressions using the Split property declaration intention or join them up again in a single one (using Edit | Join Lines).

You can now safely remove symbols that are not referenced in the project, including checking for references in comments and strings 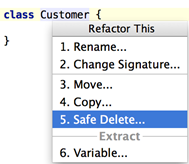 Same as the support for other languages in IDEA, you can now unwrap or remove expressions from inside the enclosing statements, via the Code | Unwrap/Remove Refactoring.

Other Features and Improvements

In addition to the above features, this release also brings some other goodies

Download it now and give it a try and please let us know if you have any issues. Important: If you’re using IntelliJ 13 EAP, please note you need the latest build to work with this release.

Release
Mixed-Site Variance in KotlinWorking with Kotlin in Android Studio