A Case Study of the JetBrains Training Partnership

Instil is a software development company based in Belfast, Northern Ireland. They specialize in mobile / cloud projects, consultancy, and training. Their training department is made up of 3 full-time and 4 associate trainers, all of whom have at least 15 years of experience in developing, coaching, and consultancy.

At JetBrains,  we’re very excited to have partnered with Instil for our Kotlin Certified Training Program. The following post, which tells their Kotlin story, has been written by Garth Gilmour from Instil.

Instil first became involved in Kotlin in 2014. Back then Microservices, Single Page Applications and Cloud were very much in their infancy, and polyglot programming meant some adventurous soul had extended their Grade build file via Groovy. We were very much a traditional JVM shop focused around Java. Several of our developers had successfully completed the Coursera Scala certification and I had written a modestly popular Scala course, but there didn’t seem to be much appetite on either the development or the training side for pushing that option any harder.

It was my colleague Gareth Fleming who first spotted the merits of Kotlin and began to advocate for it within the company. This was no accident. Gareth has an extensive background in mobile development, but at the time was teaching Java courses in response to overwhelming demand on the services side of the business. So he was well placed to appreciate how Kotlin would be an advantage both to experienced software teams and to graduate developers trying to acclimatise to the JVM ecosystem. Gareth became such a fan he started speaking on Kotlin at conferences, managed to drag me away from Scala (not an easy task at the time) and persuaded our development teams to try Kotlin on new Android projects. 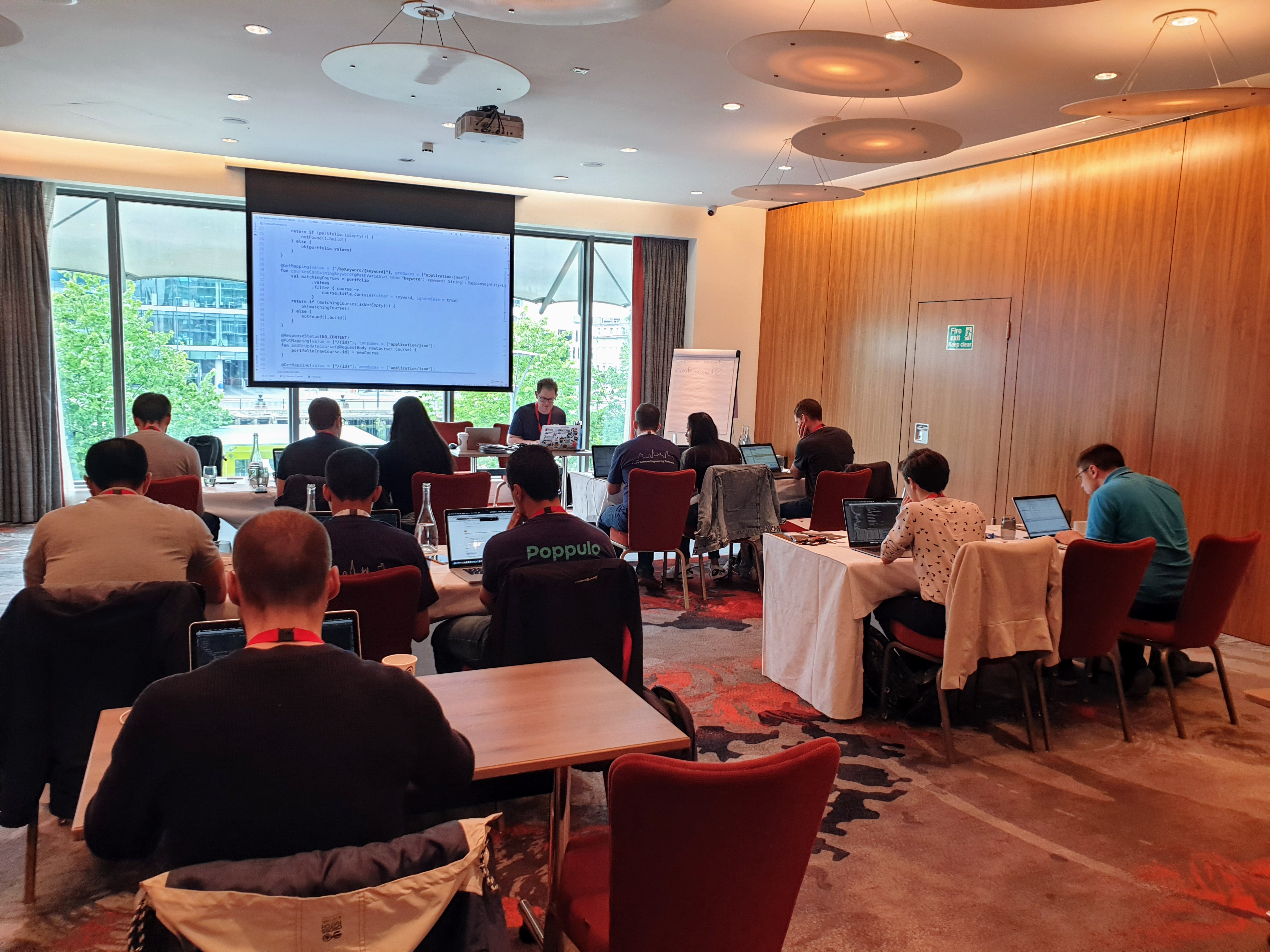 For our software business the rest, as they say, is history. We used Kotlin internally with increasing enthusiasm and started making it an integral part of our sales pitch in 2016. Since then we have delivered multiple projects using Kotlin, including mobile applications, Spring Boot based Web Applications, and Serverless systems deployed to AWS. We actively evangelise Kotlin to the other software companies we work with, and have been instrumental in helping several of them make the switch. As part of this we set up the Belfast Kotlin User Group in March of this year, organised a Kotlin Everywhere event and are actively collaborating with our sister groups in Dublin, Cork and Limerick.

Returning to 2017 those of us working in the services side of the business began to make Kotlin a priority. Every year we take a punt on a technology that we think is going to explode into the near future and write a new classroom-based course from scratch. As a team we decided Kotlin’s star was in the ascendent, so we reached out to JetBrains for some official collaboration. JetBrains were kind enough to provide us with reviews and feedback on the material.

This process continued for about six months, with additional feedback from our own coders and the wider development community in Belfast. By January 2018, we were ready to formally announce the course, so we ran a public training course with Svetlana Isakova (from JetBrains) attending as an official reviewer for the training. 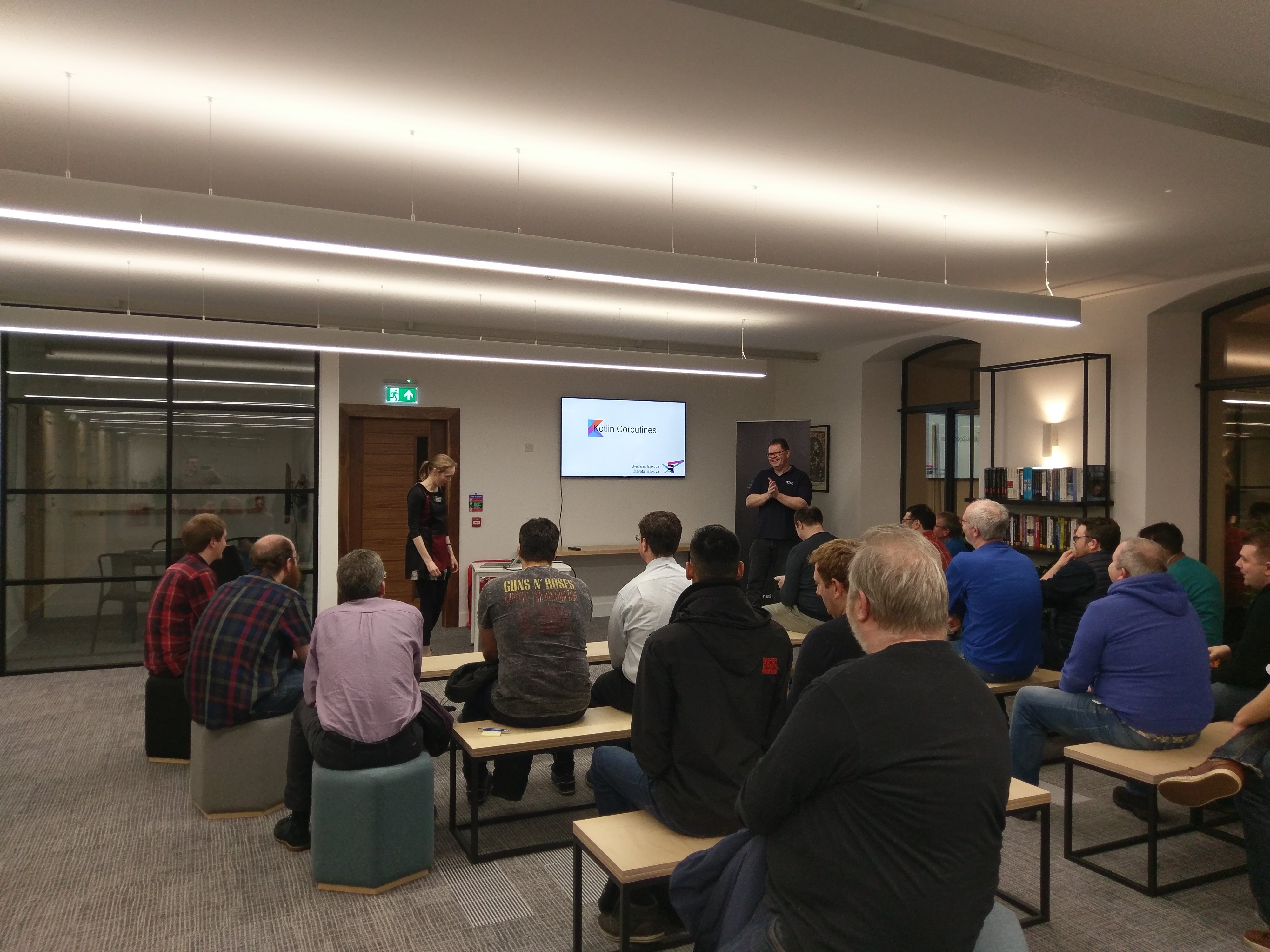 Since that first delivery, Kotlin training has become one of our specialities. My colleagues and I have been to Germany, Spain and all over the US to deliver bespoke Kotlin courses. Based on client demand we have written additional courses to convert Swift developers to Kotlin, explore advanced Functional Programming techniques and make use of new frameworks like Spring WebFlux and Ktor.

As the good news about Kotlin has spread, we’ve also been approached to do talks and single-day workshops at Kotlin, including GOTO Amsterdam, GOTO Copenhagen, NI Dev Conf (video here), RebelCon, ACCU and (last but definitely not least) KotlinConf. We’ve had so many invites in 2019 that we ended up putting them on a t-shirt :-) 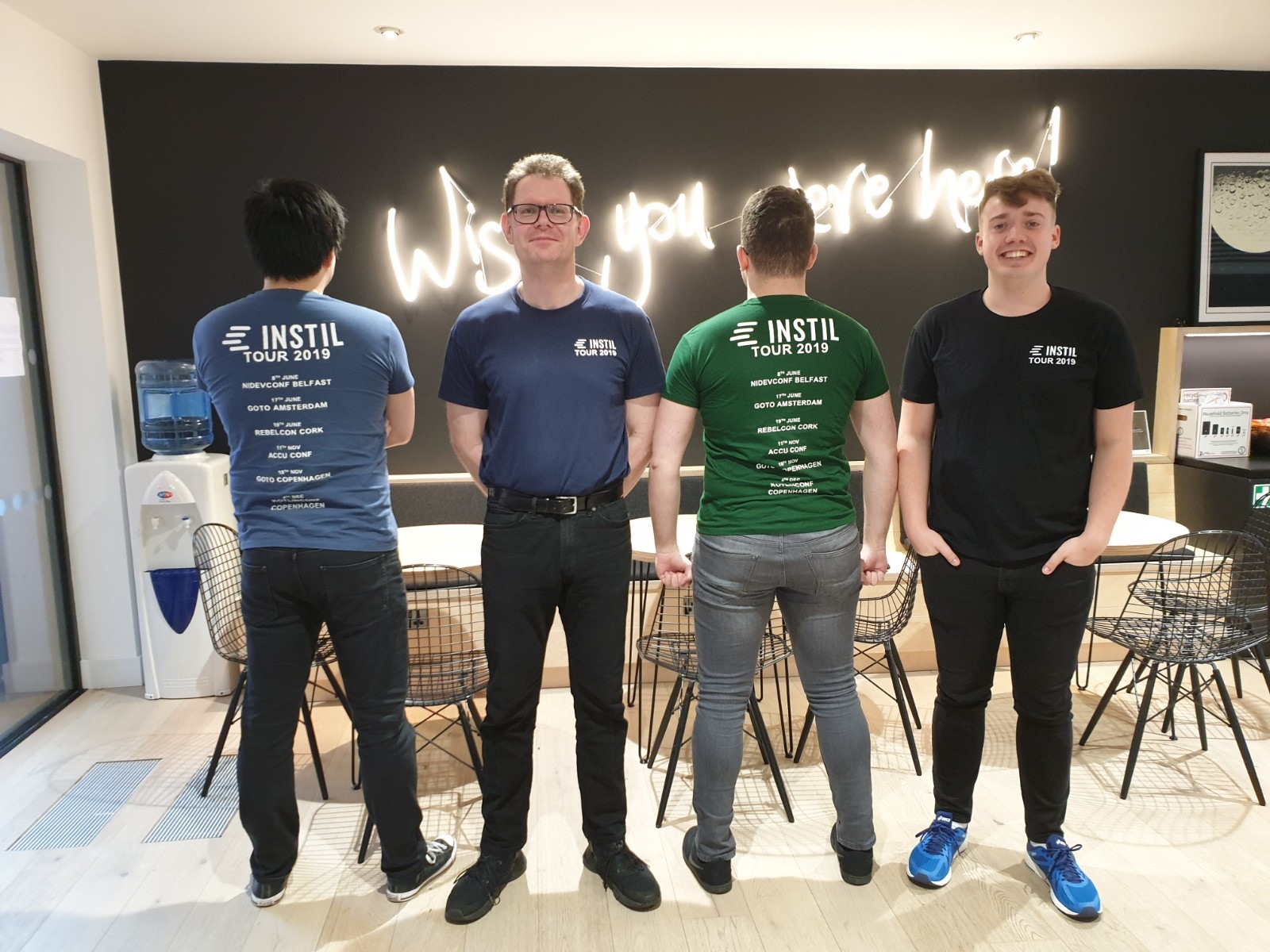 We’re hoping to collaborate with the other beneficiaries in 2020. If you are a software team considering Kotlin adoption, I would be unequivocal in recommending that you have a go. All of our experiences have been overwhelmingly positive, and the speed bumps we did encounter were never showstoppers. As a result of adopting Kotlin, both we at Instil and our partners are delivering projects faster, and we see developers having a more positive experience on the JVM.