We are happy to share all the new improvements that we’ve made for this release. If you are a visual person, you can watch our screencast, which describes the new features. 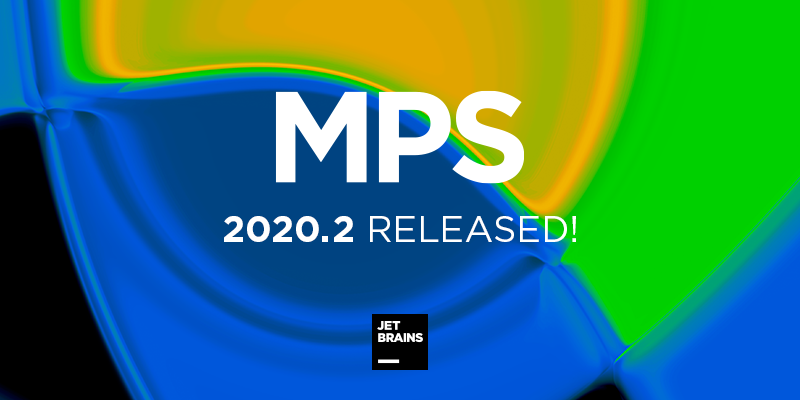 UI improvements to the VCS 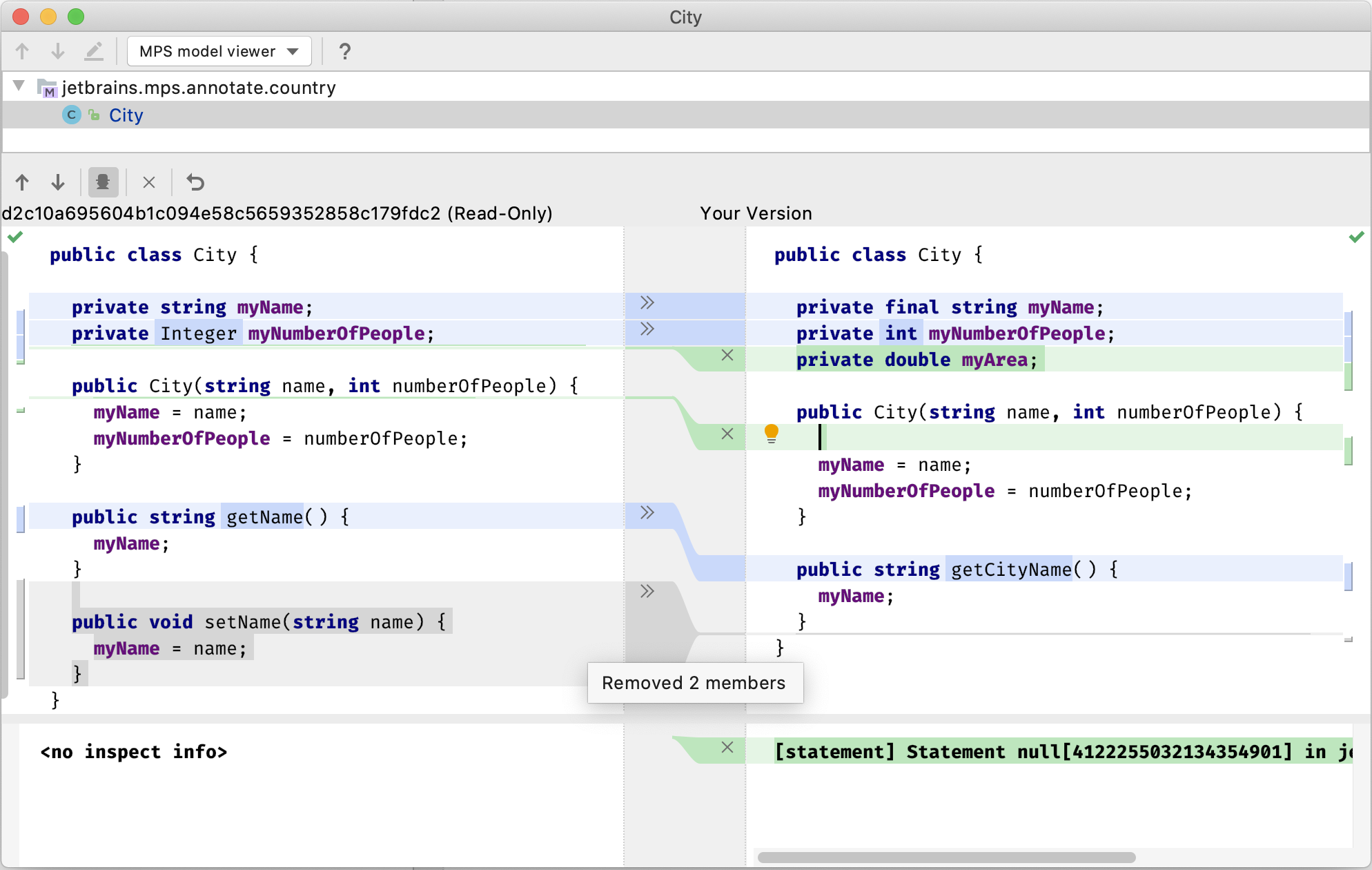 The existing “Show Root History” action in VCS did not always display results that were correct. With this fix, the models are compared instead of the source files, which results in the output always being meaningful. Furthermore, it is now possible to display the history for any node, not just root nodes. 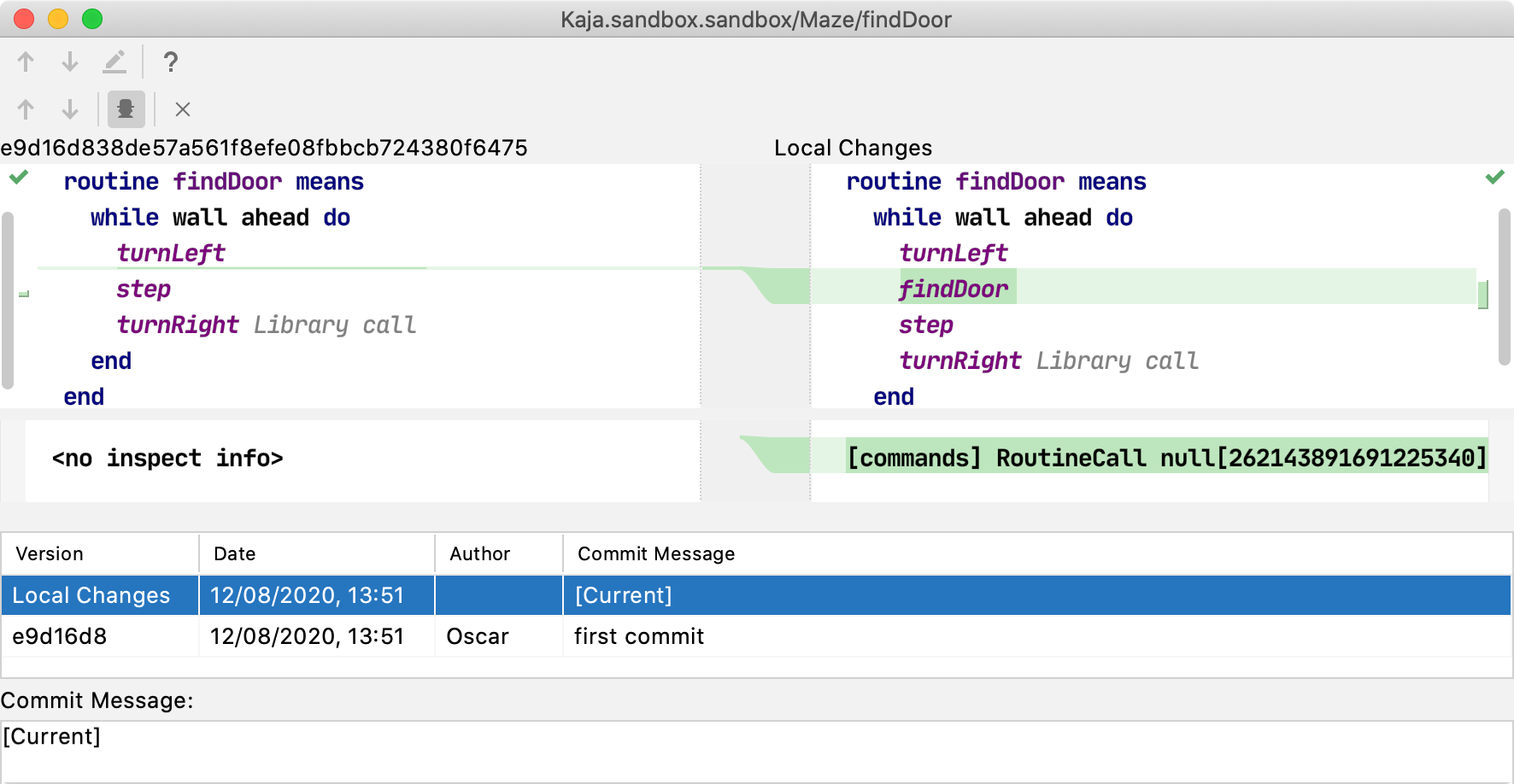 MPS is now able to structurally diff/merge non-referenceable parts of BaseLanguage models. For any instances of BaseLanguage concepts that are not supposed to be reference targets (e.g. BlockStatement or ForStatement), the MPS diff/merge algorithm will ignore the ID of the node and compare the actual node structure instead. This will prevent MPS users from struggling with structurally identical changes leading to merging errors.
Therefore, we’ve added a special way for these non-functional ID changes to be handled in VCS. Changes to the new type can be hidden in the Diff dialog with the help of the new toolbar button. Additionally, during the merge process, changes in two branches are considered to be non-conflicting if they differ only with respect to the IDs of nodes which cannot be a target for the reference.
We are going to improve the algorithm even more in upcoming MPS releases.

It is now possible to use Shift + Left/Right to select multiple sibling nodes. This shortcut can be used for method parameters, array literal values, or statement siblings.

The editor test language has been extended with the ApplyQuickFix concept. Use it in the code section of your test case as if you were testing an intention. You can choose either to run the quick-fix that is available on the selected node or you can choose a concrete quick-fix to run explicitly.

The fix that is available on the selected node:

And one last thing – switching the theme or the color scheme of the IDE no longer requires restarting the IDE for the changes to take effect! 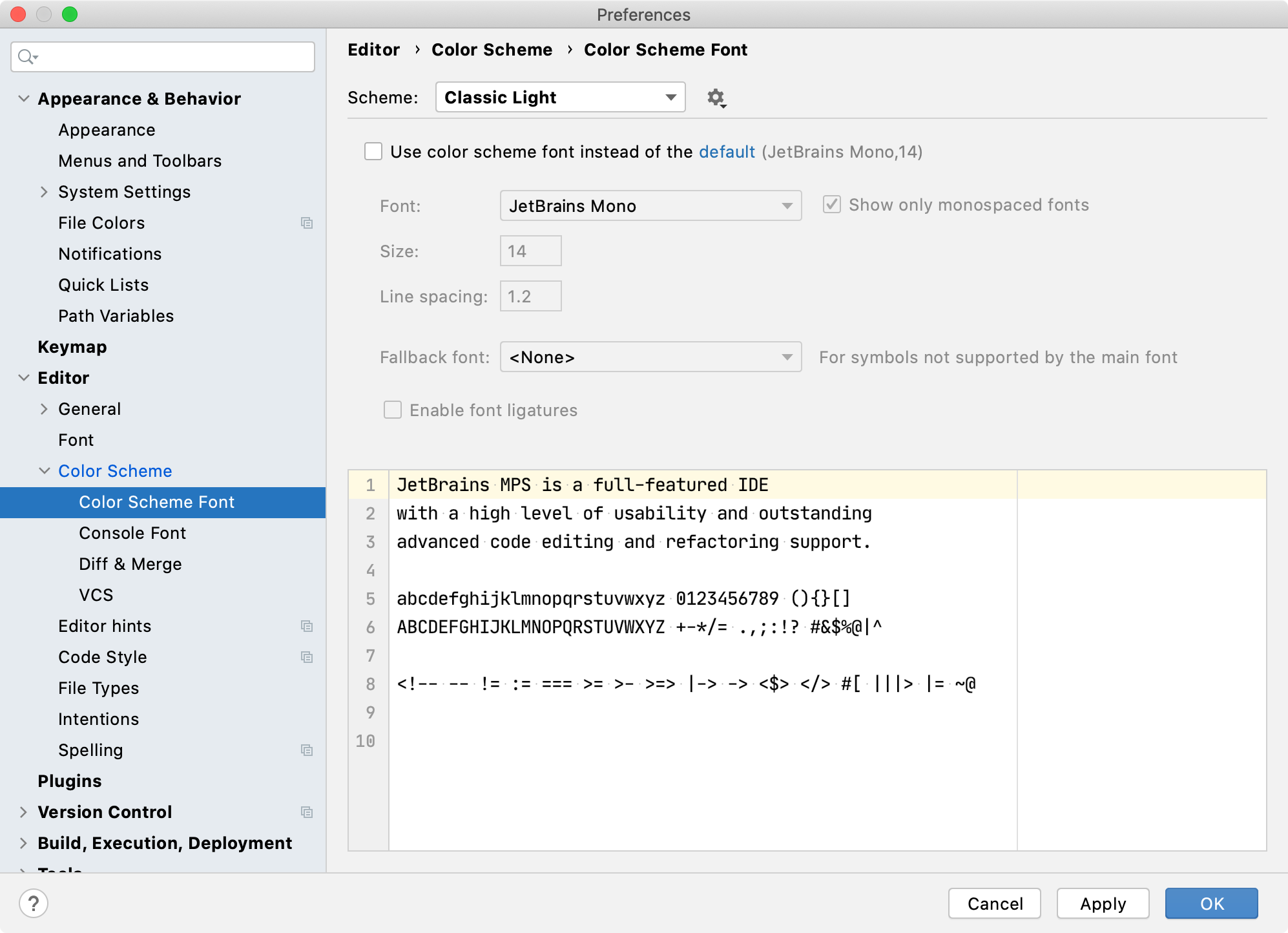 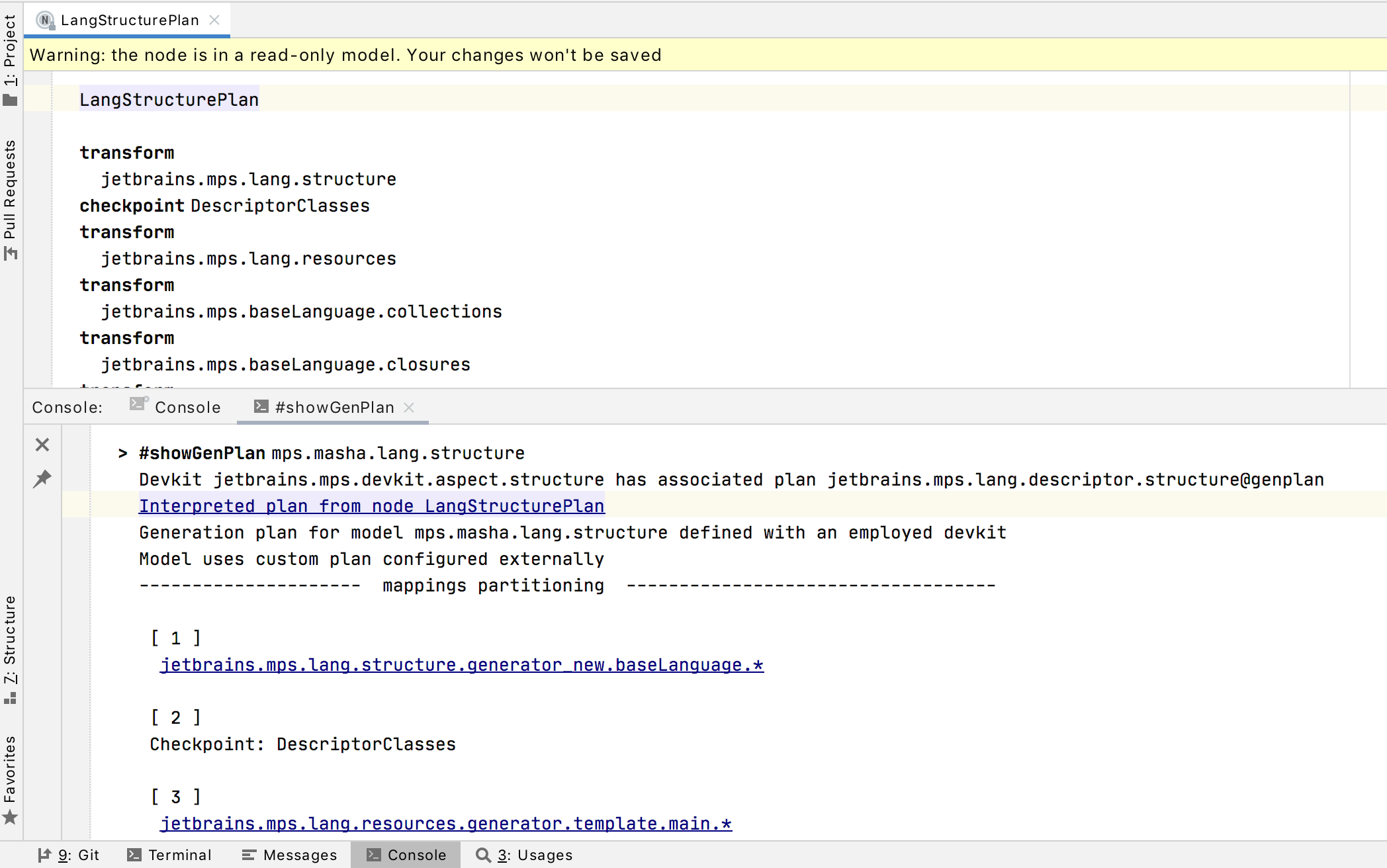 Moreover, the transformation steps keep the name of the generator module when the name of the template model is not qualified, which helps keep similarly named models distinct. 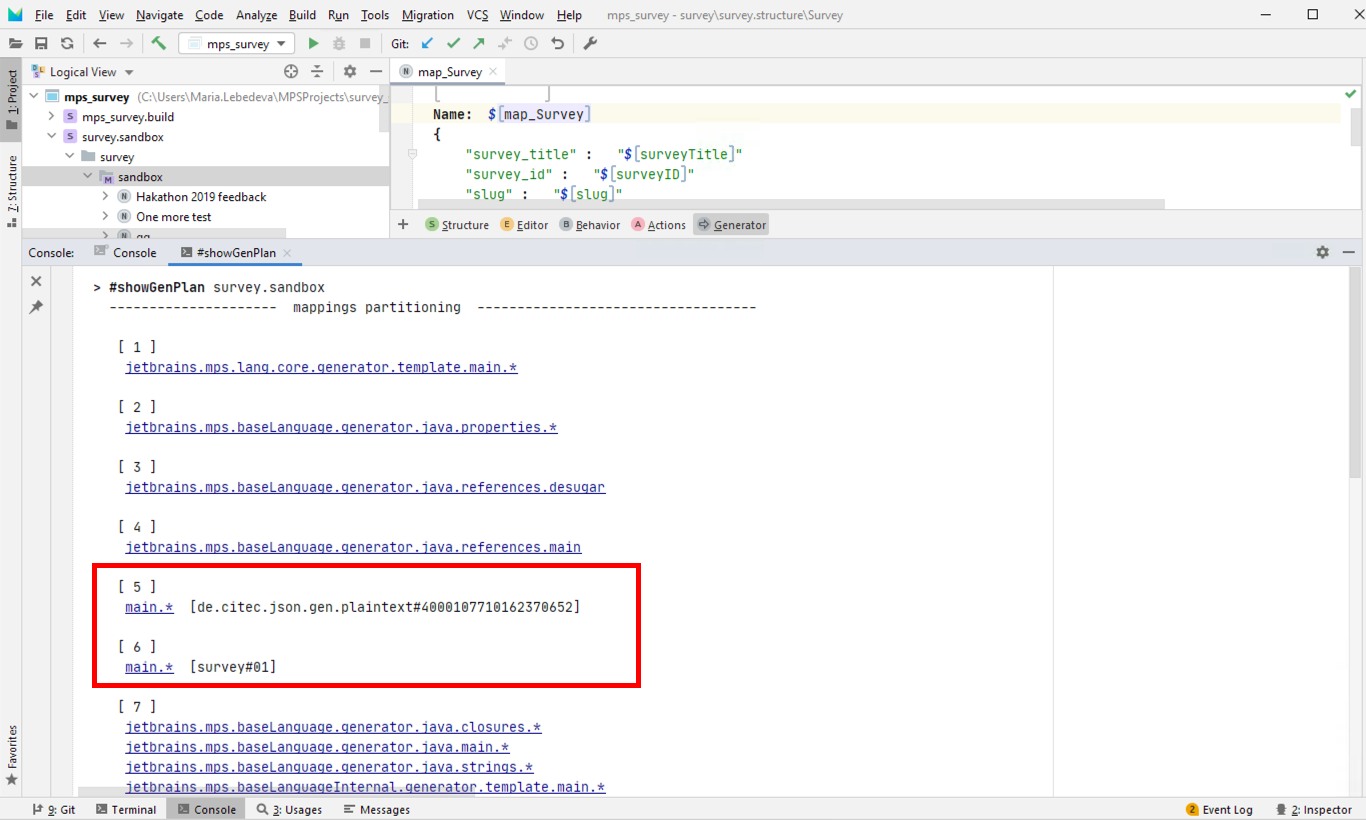 One common complaint has been that it is difficult to find languages excluded from a model transformation due to the restrictions of a generation plan. We are happy to report that we’ve addressed this issue. Languages that are used in the model but that are not covered by the associated plan are now included in the result of the ‘Show Generation Plan’ action. In addition, the ‘Used Languages’ tab in the Model Properties section also offers a warning about such languages.

Improvements to the Build language

There’s now an option to use macros for version parts in idea branding (BuildMps_Branding). The ${version.major}, ${version.minor}, ${version.bugfixNr} and ${version.eap} macros have been added to the MPS build script. The old version format still works, but it is deprecated. To switch to the new version in your build script, use the “Convert deprecated branding version to the new format” intention.

The details of open pull requests are now one click away in a separate vertical tool window. The main editor window shows the conversation, and you can add comments directly. Pre-commit check results are displayed at the bottom of the window. If you have permission to manage pull requests, you can now browse, assign, manage, and merge them, view and submit comments, and accept changes right from inside the IDE. 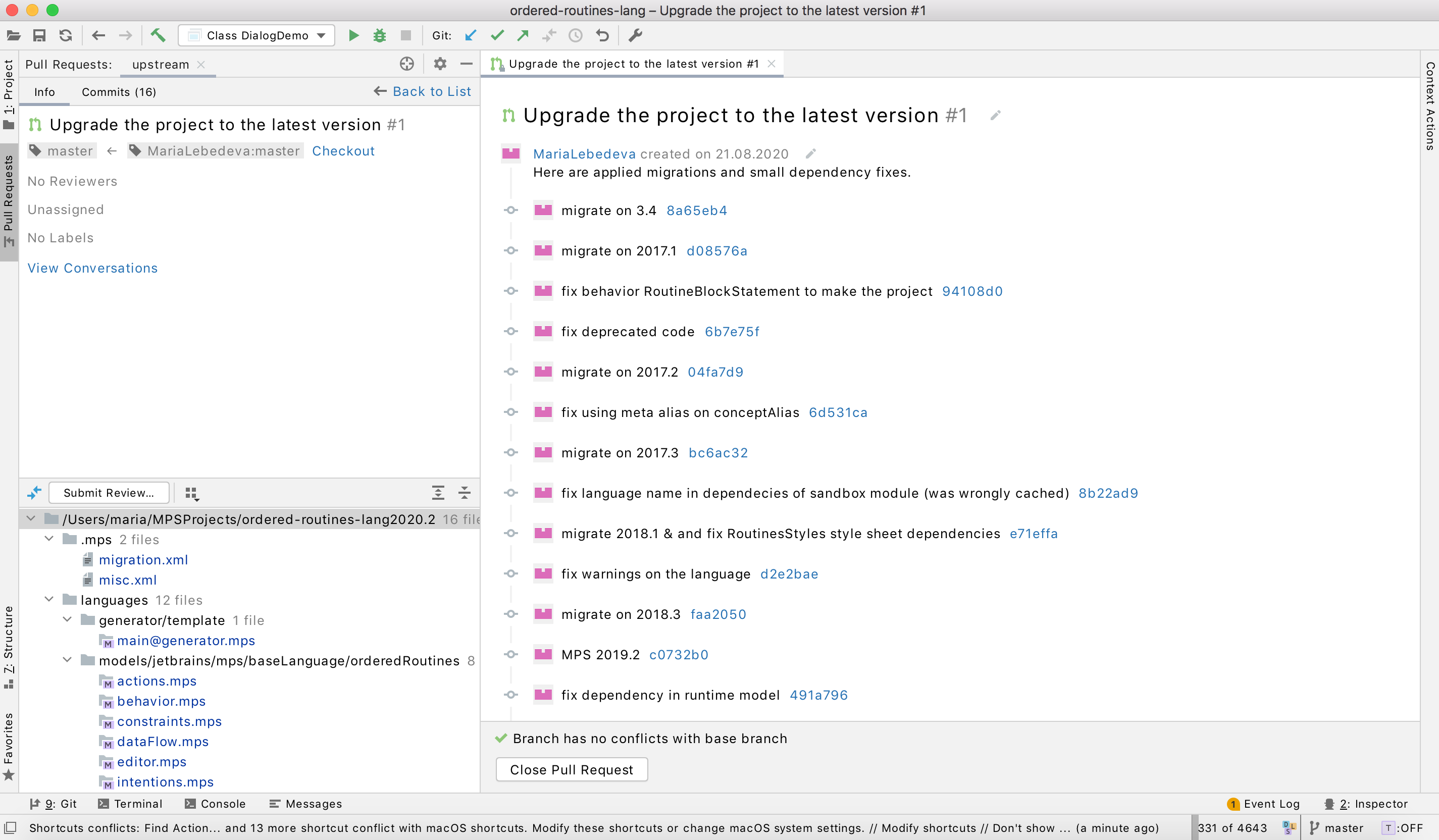 For this release, we’ve revised the visual consistency for merge, pull, and rebase dialogs. We’ve also improved the dialogs so that they clearly identify what Git commands will be executed, and we’ve included some missing options. We’ve also added –rebase and –no-verify to the pull and merge dialogs, respectively. 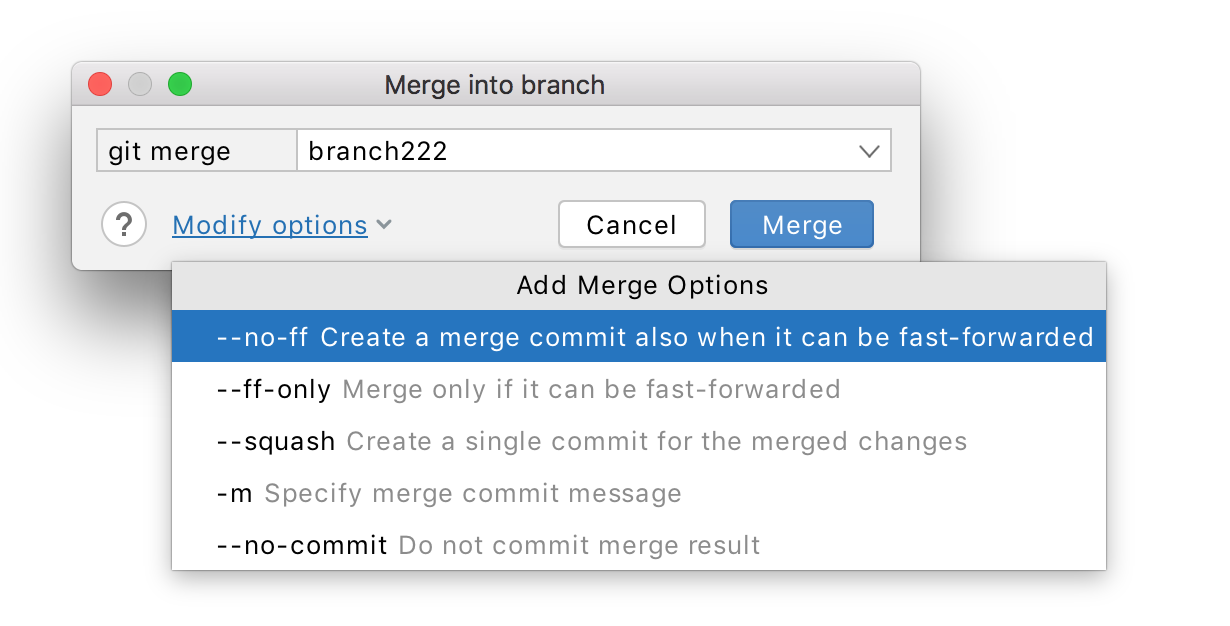 You can now select multiple commits from a local branch and squash them. In the Git tool window, open the Log tab, select local commits, and choose Squash Commits. If you decide to change the commit message, all the changes in those commits will be put into one single commit together with the updated message. In addition, you can now drop commits from the Git log. 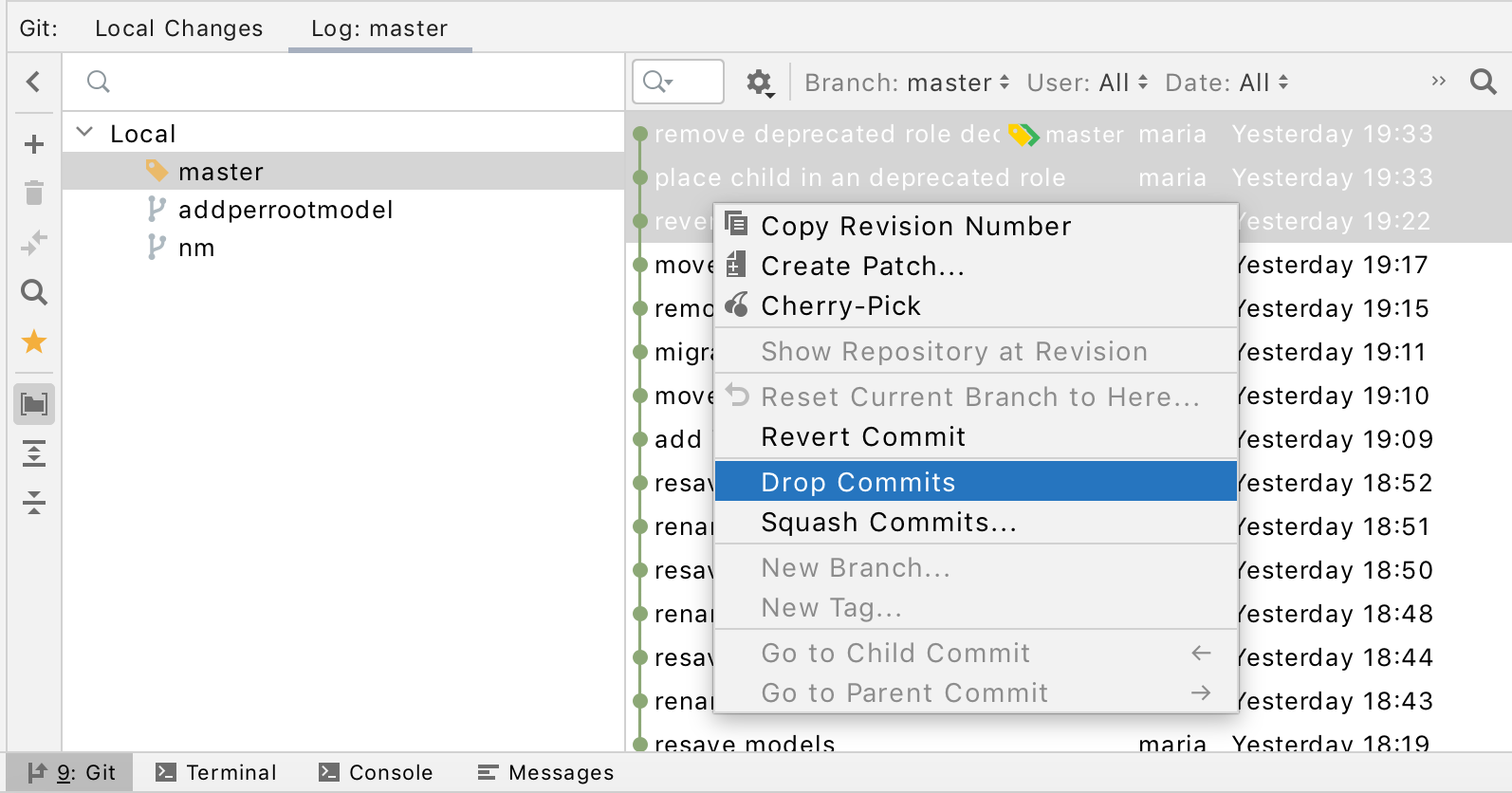 When you compare two branches in MPS 2020.2, the IDE shows their commits all in one view by opening their logs in the editor. In contrast to the VCS tool window, this view has enough space for a full report on what commits are in each branch and which files are affected.

We’ve switched GitHub authorization from the password-based system, which is deprecated and will stop working soon, to OAuth.

As always, we also fixed a long list of bugs that members of the community reported to our issue tracker.

This is our third bug-fix release for MPS 2021.2. You can find the complete list of bugs fixed in this version here. Thanks to the community’s help, we spotted a critical bug in the Version Control / merge subsystem that was causing the generator to break. The problem was happening because the stereotypes (e.g. @generator) were being lost after merging models. The issue is fixed in this version 2021.2.3. If you encounter this bug while using a previous version of MPS, please add the stereotype manually to fix the issue. DOWNLOAD MPS 2021.2.3 Please report any issues you find to our i 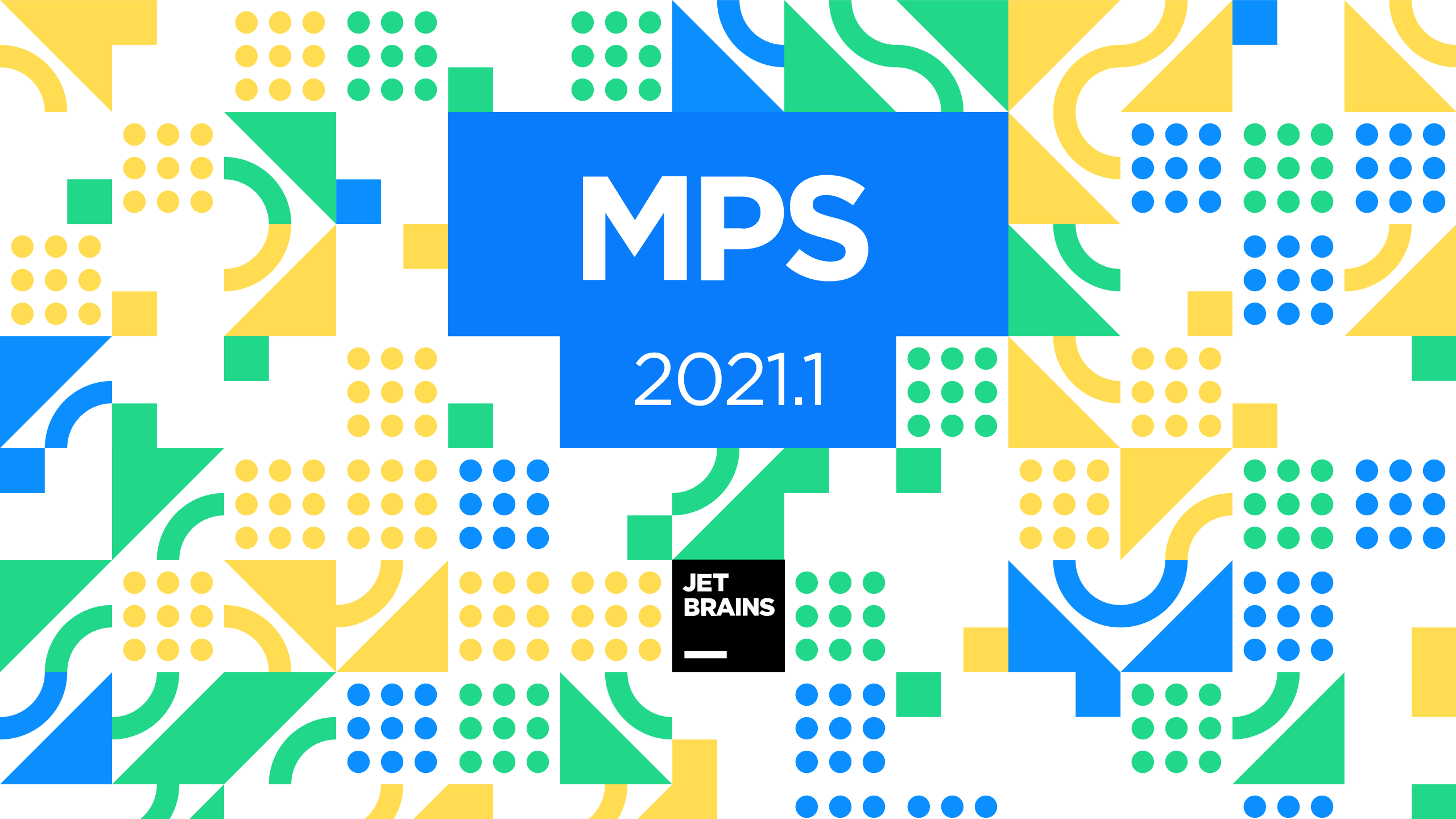 The first release of the year is here! For the past few months, we have been enhancing different subsystems of the product to improve the user experience. Read more about the new functionality above, or if you are a more visual person, watch our screencast. DOWNLOAD MPS 2021.1 Editor Zoom in and zoom out The font size can be quickly adjusted in an open editor window by holding Ctrl and rolling the mouse wheel. Font size changes are not persistent, so when you reopen the file, the text size will be reset to the default value. You can enable/disable this feature in Preferences | Editor