MPS 2021.2, our second milestone of the year, is now ready for you to try. Just as we did for the previous release, we have put together a screencast showcasing its main features. Read on to learn about the new functionality.

This feature can be turned on or off by toggling Show suggestions as you type in the Editor / General / Code completion section. The setting is on by default.

Improvements to wrapping and unwrapping changes in the VCS diff 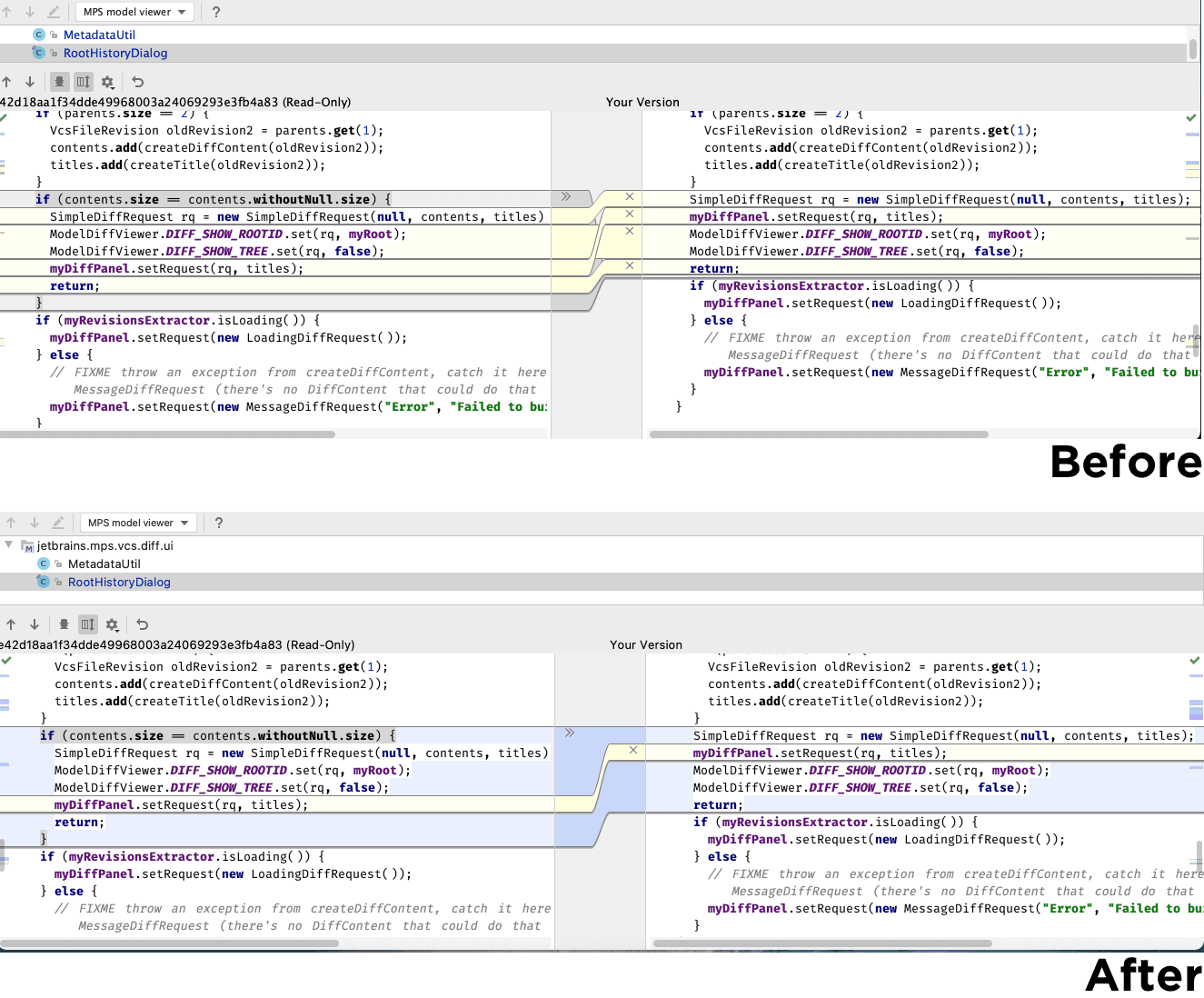 MPS functionality that employs an IntelliJ IDEA spell-checking mechanism to check comments and string literals for typos and mistakes has been extended to work with any text that may show up in a label cell. To indicate that the text of a cell has to be checked against a dictionary (as configured in Preferences), you just need to add the ’spellcheck’ style to the cell in your editor declaration.

For Rich Client Platforms (RCP), don’t forget to include the ’jetbrains.mps.editor.spellcheck’ plugin in a distribution.

We’ve addressed the scenario where a project that has been migrated to a newer MPS version is accessed by a developer with an older MPS version. The Migration subsystem now tracks the MPS platform version when applying migrations, and it warns you if a project you try to open has been migrated to a newer version. This helps prevent the unintended corruption of models.

There’s a mechanism for sharing evaluated scope pieces during a single model read. New expressions in j.m.lang.constraints for sharing scopes were introduced: for model [ factory, key], visible roots [concept], and visible nodes [concept] as replacement for new ModelPlusImportedScope(model, rootsOnly, concept). The new expressions are used to save the scope of a model to cache memory, meaning that it only needs to be recorded and calculated once.

No limitations when modifying nodes

Extension authors have to select what type of access to grant when they write code that works with MPS models. For SNode operations (e.g. setProperty, addChild(), etc.), it was only possible to grant command access, even without UI interaction. This limitation has now been lifted, and any code that holds write access for the model can now modify nodes.

The Tooltips feature now has a functionality called radar that shows which cells have tooltips. The Tooltip radar can be activated by pressing and holding the Ctrl key.

Properties in baseLanguage are now taken into account correctly on type checking. No errors for an unimplemented method will be raised when a property inherits interface or abstract methods. When defining a property with a generic type, the correct type is used for accessing the property on an instance.

Note that the setter exposed for a property of type T will return an object of type T, rather than void.

MPS now displays the difference between the initial and changed versions of files in the editor tab. It doesn’t matter how you invoke the Show Diff action, the IDE will open the diff in the editor by default.

New arrows are located in the top right-hand corner of the window in Preferences/Settings to help you navigate through the sections. They allow you to jump back and forth between the sections.

It is now easier to drag and drop a tool window to move it within the main IDE window or to make it a separate window. You can drag a tool window by clicking and holding its name bar and dropping it in any highlighted place.

There are new options for the cursor shape in the built-in terminal. Furthermore, the terminal also offers new support for shortcuts using Option (⌥) as a Meta key. For example, you can use the following shortcuts:

⌥+D – delete the next word

We introduced a new section in our documentation to share guidelines for a smooth migration to the new releases. With every major release, we will be updating this section with the latest tips and tricks.

That’s it for now. We hope you can take advantage of all the new features. We’ve also fixed a long list of bugs from our issue tracker. Let us know if you encounter any problems or have questions by leaving a message in the comments below or sending an email to our support address.

MPS 2022.2 came with a major change in the Java Development Kit version. It now supports JDK 17, while the previous versions supported and ran on JDK 11. This change may or may not impact your projects, so we decided to cover the areas that could be affected. The platform update The JDK change originated in the underlying IntelliJ platform that MPS builds on. The IntelliJ IDEA team listed the benefits of this change in one of their recent blog posts. In short, JetBrains Runtime 17 (JBR 17) brings significant IDE performance improvements, better security, enhanced rendering performance on macO