The way AppCode deals with running and debugging an application is slightly different from how Xcode does it, and from time to time we get questions on the whole run/debug configurations concept and various aspects of the behaviour. We decided to dot the i’s on this matter with this post.

What are run configurations? 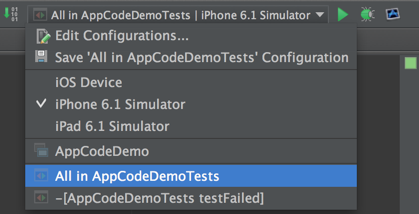 So when you open your project in AppCode for the first time, as long as you had schemes in Xcode, AppCode will fetch them and you’ll have run configurations you can already use without need for further modification.
You can also create some new run configurations in AppCode and give them distinctive names.

How to create a run configuration in AppCode?

This one’s easy – you open Run | Edit Configurations from the main menu, and see a dialog where you already have some run configurations; to create a new one click the plus icon and choose the kind of configuration: application or test.

Say, we’ve created an Application run configuration, now we need to adjust the settings taken from the default one.

Note: The defaults are like templates, they are only applied when you create a run configuration, they do not affect in any way your existing configurations. You can modify the default configurations settings in the same Run/Debug Configurations dialog: they are stored under Defaults in the tree to the right in the dialog.

So what are the options you can specify in an Application run configuration?

How to run a configuration in AppCode?

There are several ways you can launch a run configuration in AppCode:

The shortcuts for debug are similar – Ctrl+D to start debug session with currently selected run configuration, Ctrl+Alt+D to invoke popup and choose configuration to debug. Also you can switch between run and debug mode in the popup by holding Shift.

How to change target destination?

You can change the target destination from the Simulator to device and back from the Navigation bar or from the Run popup menu. 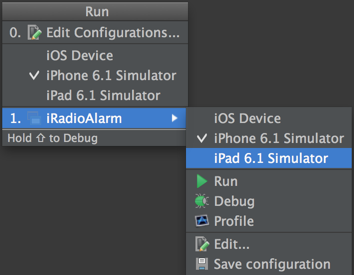 Why are there two different actions: run and debug?

In AppCode unlike Xcode run and debug are two different actions. The reason is simple – sometimes you might just want to run your application and see what it will look like for your end users. In this case you don’t need to stop at breakpoints, and you can use run instead of debug.

Hint: You can run several configurations simultaneously, but not on the same device, nor simulator. Why would you need that? For instance you might want to quickly run a test without stopping an application that is already running. Or, you may have a complicated multi-process application.

Live templates are one of the most powerful coding assistance features in AppCode. You can create a template for any code chunk and quickly add it to your code whenever you need it. In this blog post, we will show you how to use predefined live templates, and also how to create new ones and share them with your team members. Predefined live templates AppCode provides sets of live templates for Swift, Objective-C, and other supported languages out of the box. Go to Preferences | Editor | Live Templates to see the lists of predefined templates. For example, this is what we have for Swift: Expan
December 14, 2020 by Marianna Kononenko

In this blog post, we will talk about the most useful basic AppCode actions that can help you edit code much faster. Once you learn these shortcuts and start using them regularly, you’ll come to realize just how much time they save you. 1. Duplicate a line Place the caret at the line you want to duplicate and press ⌘D: 2. Delete a line To delete a line at the caret, press ⌘⌫: 3. Expand/shrink the selection In AppCode, you can select code fragments based on their structure using the Extend Selection (⌥↑) and Shrink Selection (⌥↓) actions: In our example, the code selection is extended in the
September 22, 2020 by Marianna Kononenko
Subscribe