PhpStorm and YouTrack: We Want Your Feedback

It’s been 10 years since PhpStorm first came out. Back in 2009, it had the working name ‘WebIDE’, which incidentally is why our tickets in YouTrack have the prefix WI-.

PhpStorm has grown tremendously and added many features and subsystems. Still, our team is small and close-knit. Our developers, QAs, and support engineers work together to deliver the PHP IDE to help you craft the best software. But the biggest part of our team is you – our community. Without your feedback, the product would have never become what it is today!

In this post, I’d like to tell you a little about how we manage feature requests and bug reports, and how to submit your feedback so that it will make an impact faster.

How to send us feedback

First of all, let’s see what channels are available for sending us feedback, be it bug reports, feature ideas, requests for help, and so forth.

Right in PhpStorm, just like in any other JetBrains IDE, you have the Help menu: 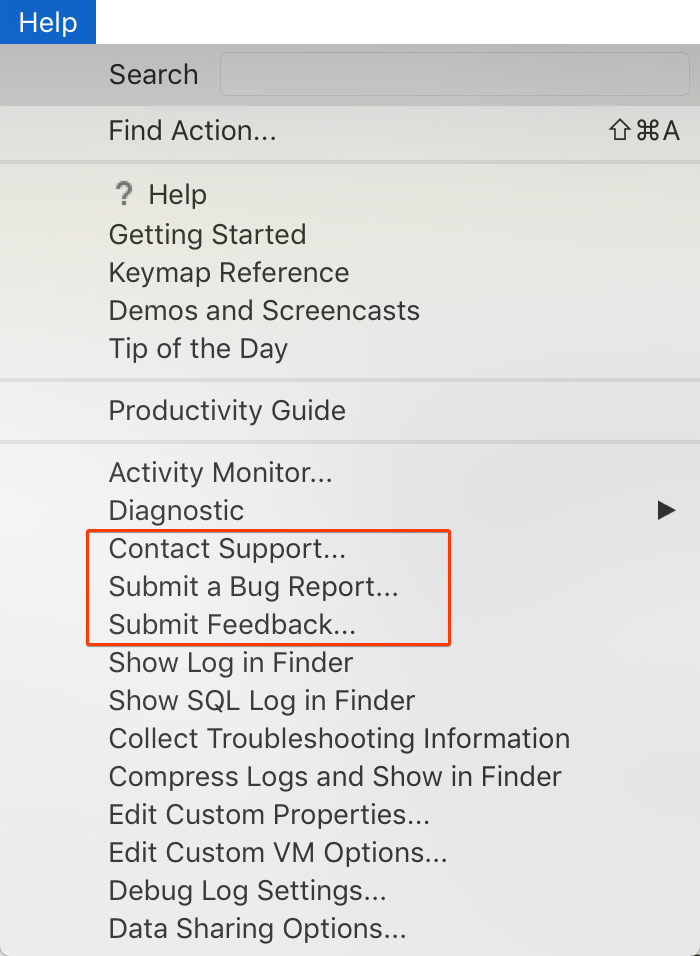 Under this menu, there are three options:

Contact Support… – this one will open a page with a form to submit a support request. If you don’t know how to do something, and an Internet search has not been helpful, use this option. Another use case is if you notice your system behaving strangely and you’re not sure if it’s a bug. Basically, for anything strange that you struggle with and need a hand, Contact Support.

Submit a Bug Report… – this lets you file a ticket in our issue tracker called YouTrack. Use it for both bug reports and feature requests. We’ll discuss it in detail below.

Submit Feedback… – want to praise us or blame us? Use this one, and be sure to add some details.

You can also poke us on Twitter by mentioning @phpstorm, and on Facebook by sending a direct message to facebook.com/phpstorm – we do read and respond to both pretty quickly!

Now let’s go deeper into getting around YouTrack and look at some dos and don’ts. I will also clarify some confusing things and dispel stereotypes and common misconceptions. 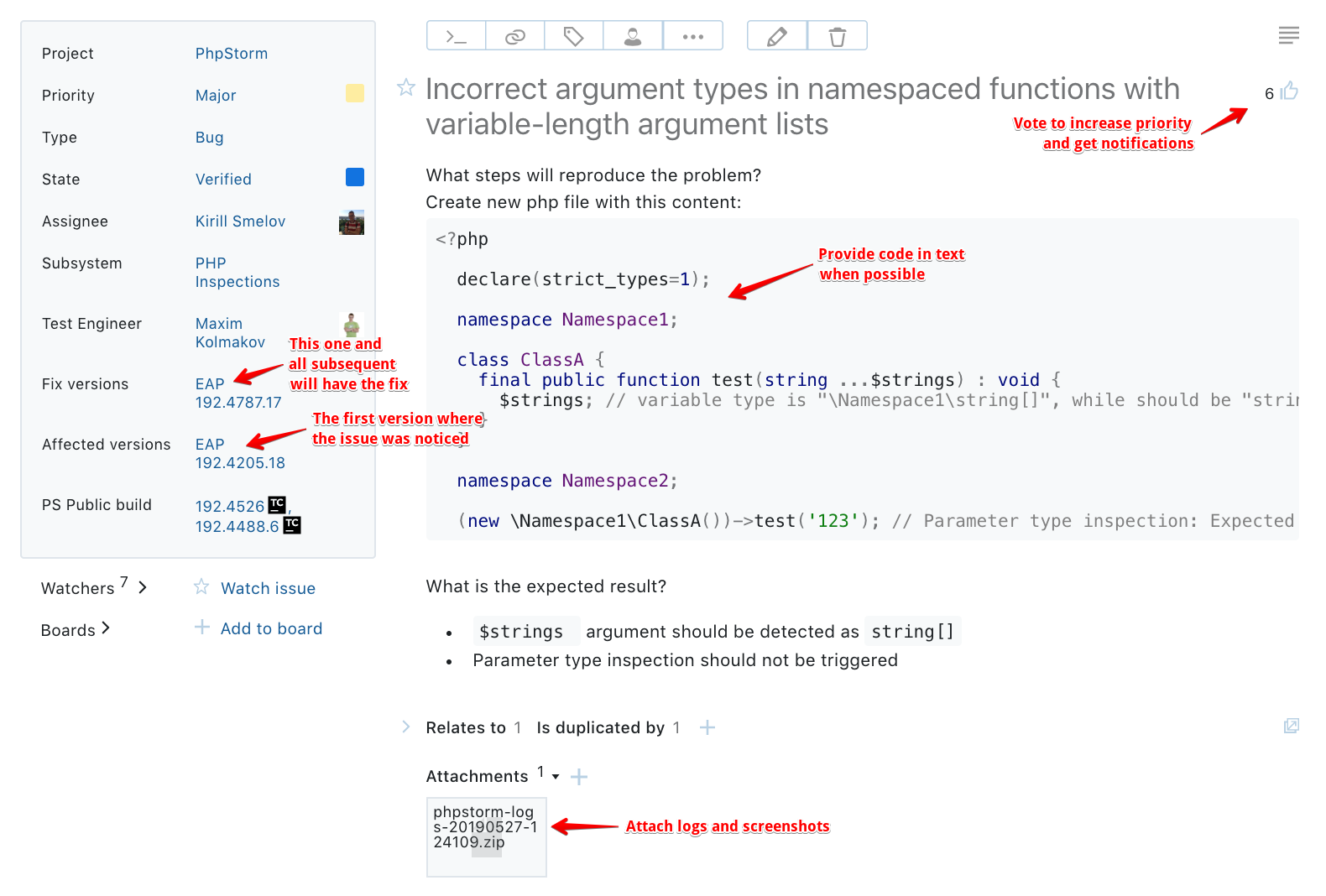 When creating a new issue in YouTrack, the more information you provide, the better.

Tip: Instead of gathering information manually, you can just use Help | Collect Troubleshooting Information and Help | Compress Logs and Show in ….

Anyway, it’s always better to report an issue than not to. Don’t worry if it’s not perfectly described, we’ll help you!

What do the different issue states mean?

Sometimes you’ll see that a ticket you’ve reported was closed as a duplicate. In fact, approximately 60%-70% of submitted tickets are duplicates. Does this mean that submitting duplicate is a bad thing? Absolutely NOT! Every submitted ticket is important and valuable. Your specific example may describe an additional edge case, or it may narrow down the scope and help us fix the bug. In addition, when the original issue is fixed, a QA engineer will go through all duplicates to make sure that they are fixed as well. If not, your duplicate will be converted to a separate request. In short, any additional information can be helpful!

When you create a new issue, keep an eye on Similar Issues – one of them may have your very issue, already reported.

If you find an existing ticket that describes your problem exactly, it’s a good idea to comment on it. This will let us know that it’s still relevant for you. Try to leave meaningful comments (preferably a code sample or steps to reproduce the issue) and if possible provide the details of your use case.

Tip: Instead of commenting with “+1”, it is better to vote for the issue.

There’s one situation that deserves a special mention. If you’re facing a performance problem, please always create a separate issue. The reason is simple: without knowing the PhpStorm internals and access to profiler snapshots, you can never really know if your performance issue is a duplicate of someone else’s.

“Liking” an issue does two things: first, you help us prioritize it, and second, you subscribe to updates about the issue. Whenever there is any activity around the issue or its status changes, you’ll get an email notification.

When deciding what features to implement next, we consider multiple factors such as user votes, our internal research results, and the complexity-to-value ratio, among others. Please be aware that this decision may also be affected by potential API limitations or libraries that prevent a certain feature from being implemented. But at any rate, highly voted issues are never forgotten and are always on our short list!

Every ticket in YouTrack has a number of fields. Some of them are pretty self-explanatory, but a few others often cause confusion. In general, you don’t have to set any fields – we’ll do this for you based on our ticket-handling process.

That’s all for today. Do contact us in whatever way works for you. We’ll do our best to help you! If there’s anything else you would like to know – just ask!

In this build, we’ve added the ability to create custom Regexp-based inspections, and there is a pack of new, built-in inspections available. The EAP allows you to try new features from the upcoming stable release, PhpStorm 2023.1. EAP builds are free to use. You can install them side by side with a stable version of PhpStorm. If something doesn’t work correctly, you can quickly switch back to the previous version without interfering with your workflow. (more…)

In this build, you’ll find performance and quality-of-life improvements. The EAP allows you to try new features from the upcoming PhpStorm version, 2023.1. EAP builds are free to use and you can install them side by side with a stable version of PhpStorm. If something doesn’t work correctly, you can quickly switch back to the previous version without interfering with your workflow. (more…)