Some good news for plugin developers – starting in IntelliJ IDEA 2017.3 EAP 173.2463.16, we’re introducing some improvements and fixes to working with test data. Let’s take a look at what’s new.

For those that don’t know, the IntelliJ Platform comes with a test framework we can use to test language features added by plugins. The tests themselves are functional tests – we run an in-memory, headless version of the IDE that can load test data, such as projects and source files, execute a feature on those files (such as highlighting) and then compare the output of the feature with known good files. If the files match, the test passes. If they don’t, the test fails. More details on this approach can be found in the SDK documentation.

This approach to testing is very powerful, and abstracting our tests away from implementation details has proven very useful many times. However, there are some downsides to working with external files for input and expected output. One of which is quickly navigating between the files.

IDEA and the IntellIJ Platform have a couple of features to make it easy to navigate to your test data files. The first is the addition of a Navigate to testdata action in the popup menu for the Run Test Method gutter icon.

This is also available from the popup menu in the Run Tests window. 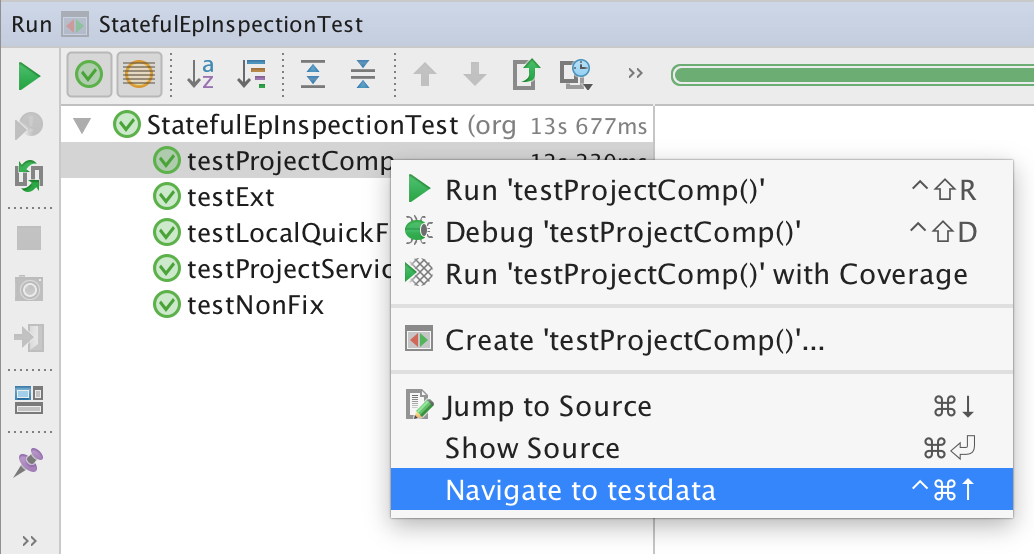 You can also use the Related Symbols action on the test method.

The second navigation feature is a Go to <testdata directory> action, available in the popup menu under the Run Testcase gutter icon. This looks for a @TestDataPath annotation, and will navigate to the directory in the Project tool window. You can also invoke Goto Declaration on the path in the string literal.

The EAP also includes fixes for several annoying bugs, and some UI improvements.

And there are some improvements in detecting the test data files for a test method:

To enable navigation, the IntelliJ Platform needs to be able to work out where your test data lives. You can do this either explicitly, using the @TestDataPath annotation on your class, or by convention, naming your test data directory after the test class. For example, if your class is called StreamToLoopInspectionTest, then you can name your test data subdirectory streamToLoop.

Another useful tip is to make sure you name your before/after test data files properly. For example, myQuickFix_before.java and myQuickFix_after.java. The IntelliJ Platform will use a split editor to make it easier to view and edit both files.

If you have any suggestions for what else could be improved please share in the comments or in YouTrack.

It has been a while since the release of our most recent issue of the Busy Plugin Developers Newsletter, which means we’ve got a lot of work to do in this edition to fill you in on the major developments in plugin tooling and the latest news about JetBrains Marketplace. Marketplace news: ⭐️ Better visibility for freemium plugins on JetBrains Marketplace When it comes to dist

The fourth episode of the Busy Plugin Developers series is available on JetBrains TV. In this webinar, our guest speaker Dmitry Kandalov demonstrates how to add IDE features at runtime with the help of LivePlugin. If you prefer reading over watching, here’s a quick summary. https://www.youtube.com/watch?v=pgGg-IwUQYM Extendending IDEs without implementing a plugin In some cases, if you

Guest Post: 5 Things You Should Know Before Coding an IntelliJ Platform Plugin

This is a guest blog post by Jules Faucherre, Software Engineer at Ponicode.