The release of PyCharm 1.0 has been just over a month ago, and now we’re ready to start the Early Access Preview program for the next release of PyCharm. You might have seen the roadmap already, and you’ll note that a major part of the new stuff planned for 1.1 is already there in the preview build.

First of all, the new PyCharm is based on a newer version of the IntelliJ Platform. Besides a ton of performance and usability improvements, this brings us two very cool new features: autopopup code completion and floating editor windows.

Second, we’ve bundled a couple more plugins from IntelliJ IDEA into PyCharm. The big one is Remote Hosts Access, allowing you to work with remote files over FTP/SFTP and synchronize your local changes with the server easily. Another one is Task and Context Tracking, which lets you track your context when switching between tasks on a project, and supports loading the list of tasks from an issue tracker. And finally, PyCharm supports the GitHub integration.

Now let’s talk about Python specific improvements. A recurring theme in the feedback that we received after the 1.0 release was that the debugger in PyCharm lacks features compared to other Python IDEs people have used. We’re happy to say that many of the complaints have already been addressed. We’ve implemented conditional breakpoints, exception breakpoints (still work in progress – some features remain to be finished), and a new debug console allowing you to execute any Python statements in the context of the debugged process when stopped on a breakpoint.

The test runner has also been improved. We now support running doctests, nose tests, and the py.test support is now compatible with the latest version of the framework. 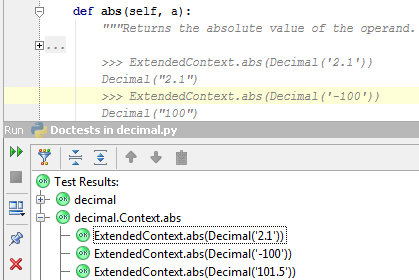 We’ve also made the code completion in Django and GAE code quite a bit smarter, added a bunch of new inspections allowing to shorten verbose code constructs, reduced the appearance of irrelevant auto-import popups, and of course, fixed a lot of bugs.

So please download PyCharm 1.1 EAP now, and tell us what you think! (Note that this EAP doesn’t include a free license and does not extend your evaluation period. You can use it if you’ve already purchased a license, or evaluate it for 30 days if you haven’t tried PyCharm yet.)

The fourth EAP build supports another Python 3.11 PEP, gets Angular standalone components, improves code insight for ParamSpec, fixes long-awaited debugging issues for WSL projects and the WSL interpreter, and introduces more fixes. A new build is available from our website, via the Toolbox App, or as a snap package (if you are using Ubuntu). If you are on macOS, there is a separate build for Apple Silicon (M1 chip).  Important: EAP builds are not fully tested and might be unstable. Python 3.11: Support for marking individual TypedDict items as required or potential