Today I’d like to highlight some recent changes and improvements in PyCharm`s Python debugger and explore the brand new attach to process in more detail.

Previously PyCharm used a special fork of the PyDev debugger with some PyCharm-specific changes, as well as our own unique features like GEvent debugging and breakpoints at Django templates. Before releasing PyCharm 4, we decided to contribute to open-sourced software and merged our debugger code with that from the original PyDev repository. Now the work on the debugger continues from both sides (PyCharm and PyDev) in one place. The merged source code now lives at https://github.com/fabioz/PyDev.Debugger and pull requests are greatly appreciated!

As a result of the unification and the work done since PyCharm 3.4, the debugger in PyCharm 4 has grown more powerful. We’ve added the Referring Objects view, Jinja 2 templates debugging, and other small improvements. Still, the most notable debugger feature introduced in PyCharm 4 is attach to process.

Using this feature you can connect the PyCharm debugger with any running Python process and debug in the attached mode.

Note: ‘Attach to Process’ functionality is available in both PyCharm Community Edition and PyCharm Professional Edition starting with v4.0. This feature is supported on all Windows, Linux and Mac platforms.

Let me show you how it works.

I have opened the project in PyCharm and launched it using standard run/debug configurations: 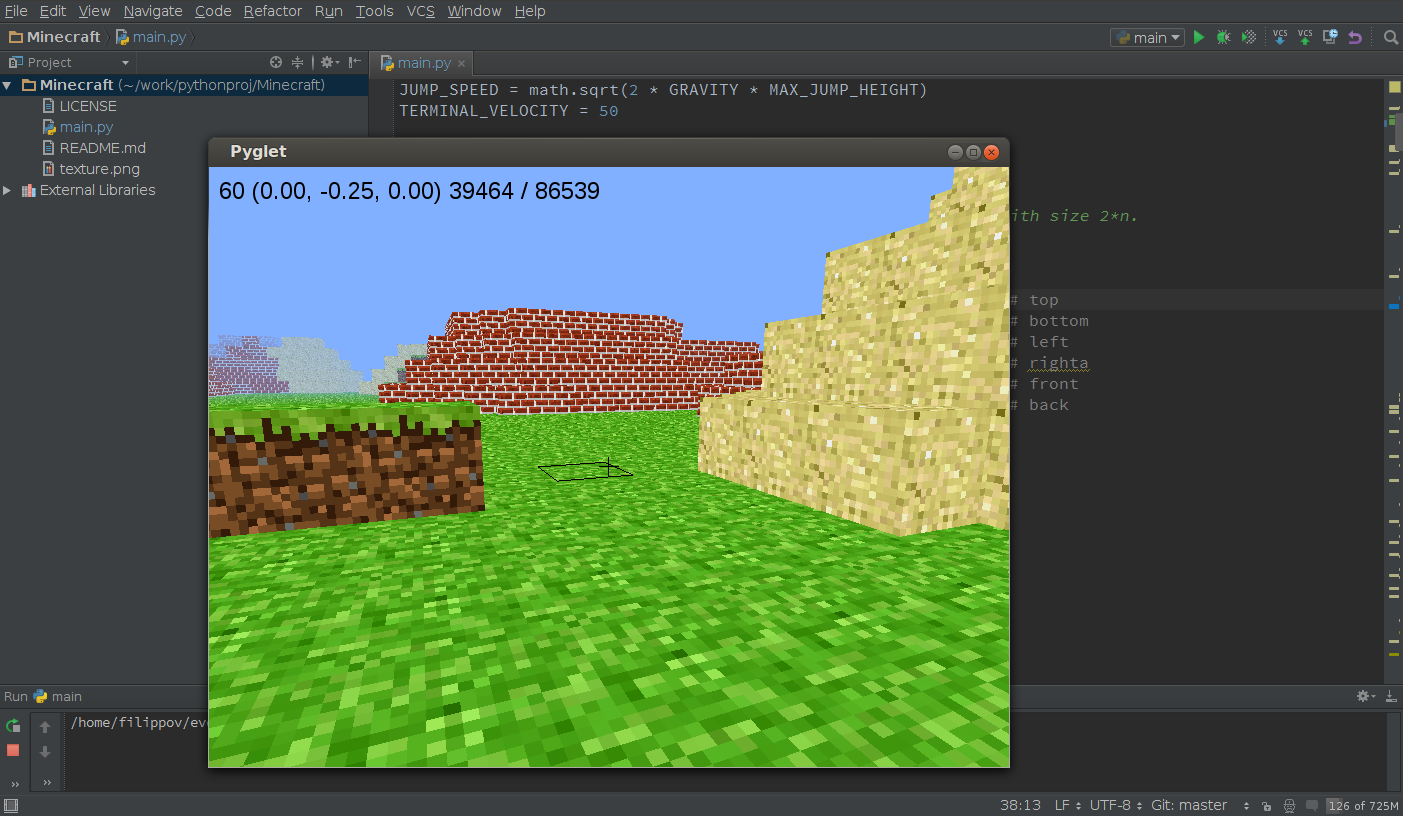 The project is running, so now I can attach the debugger to it. For that I go to Tools and select Attach to Process. PyCharm shows the list of running Python processes in our system. I select the Minecraft process and click OK: 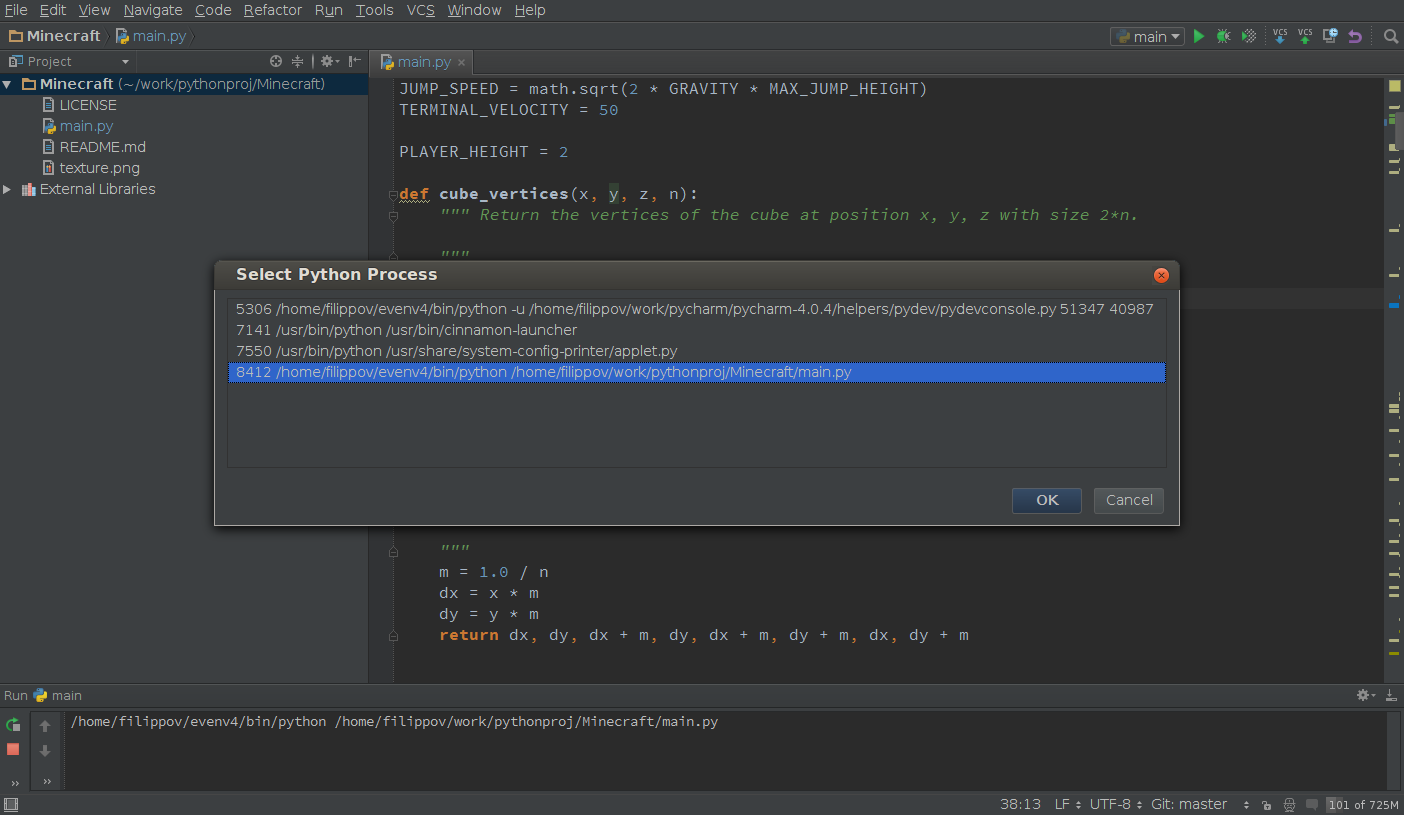 PyCharm automatically shows the debugger console with the message that the debugger has successfully connected to the process: 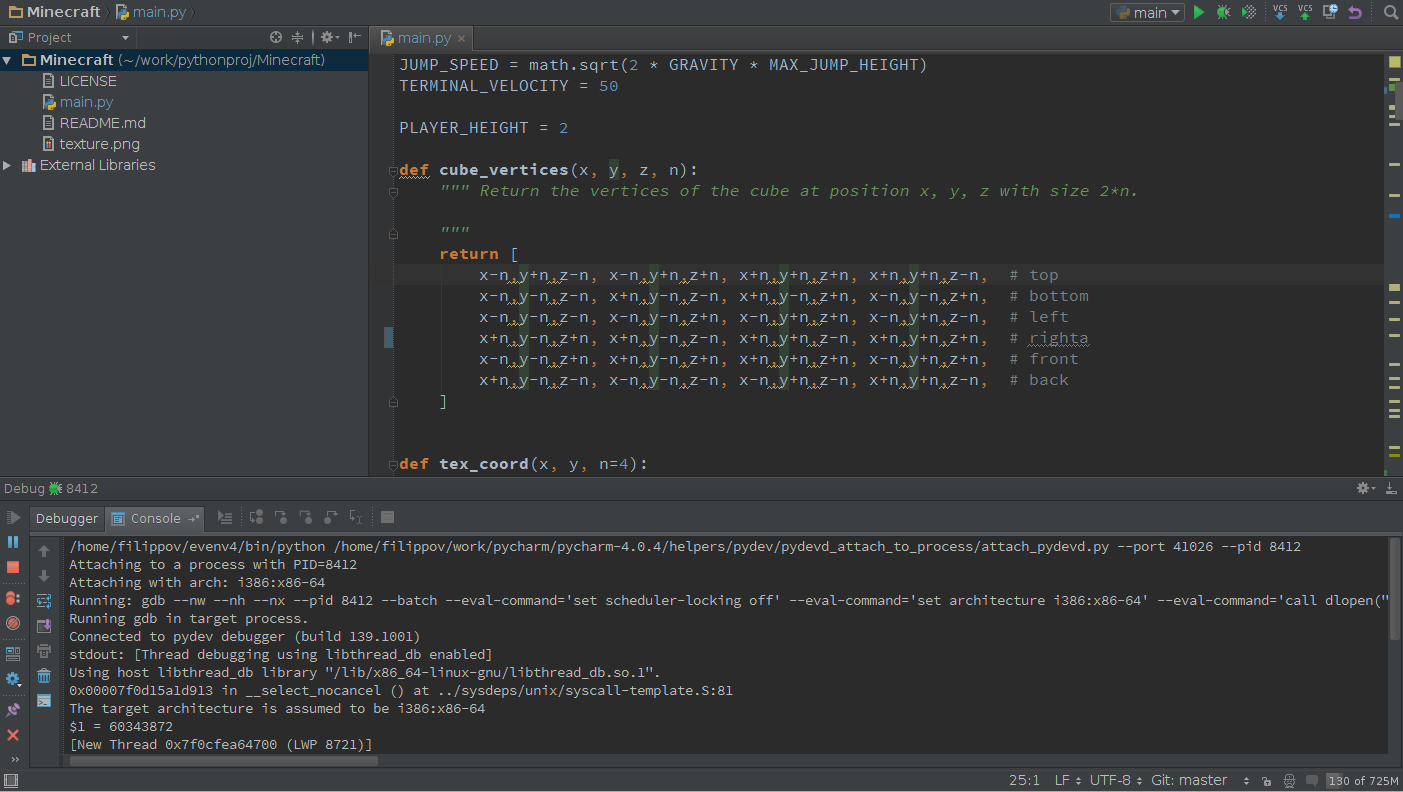 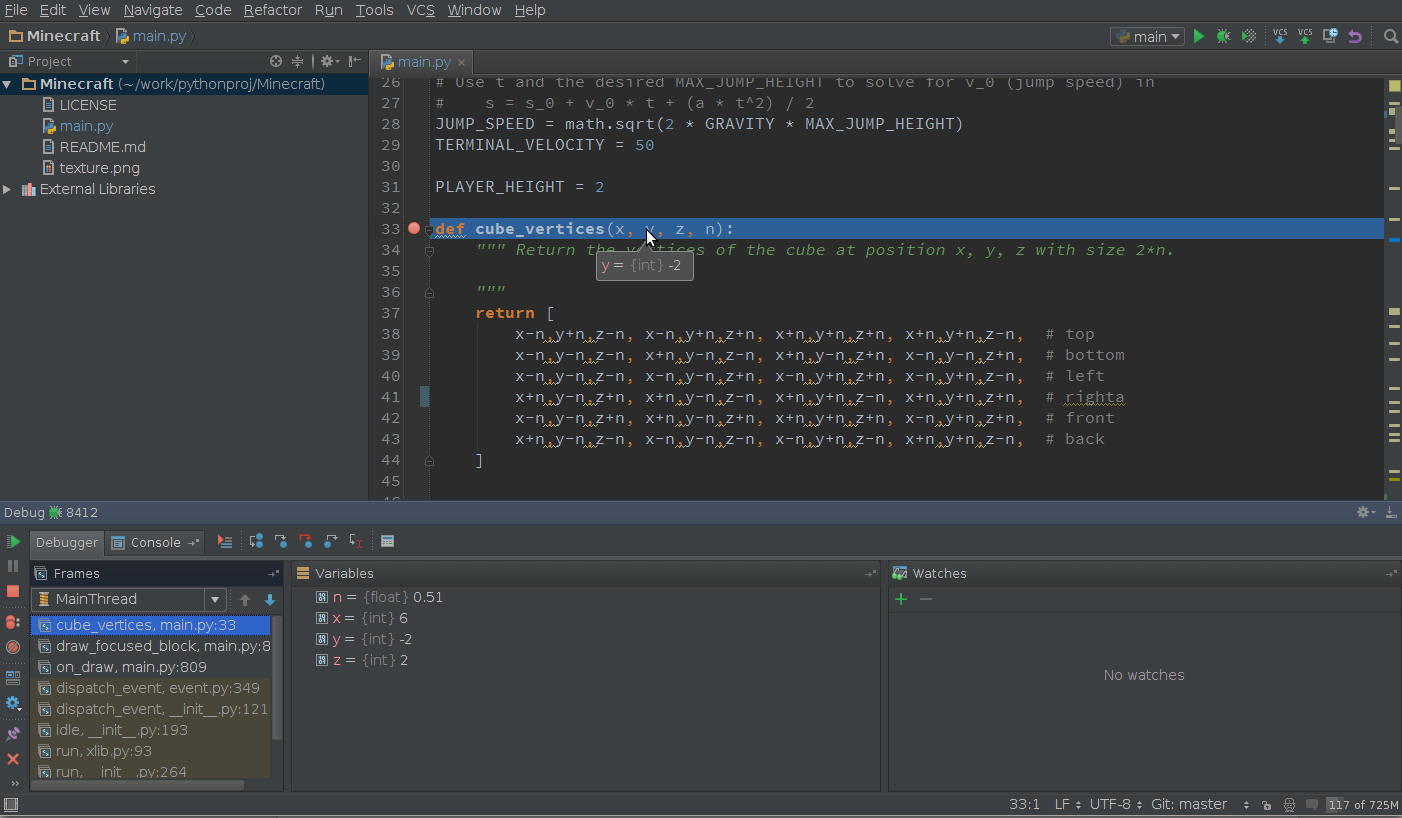 Now we can use the debugger as usual – stepping into/over, pausing and resuming the process, evaluating variables and expressions, and changing the runtime context: 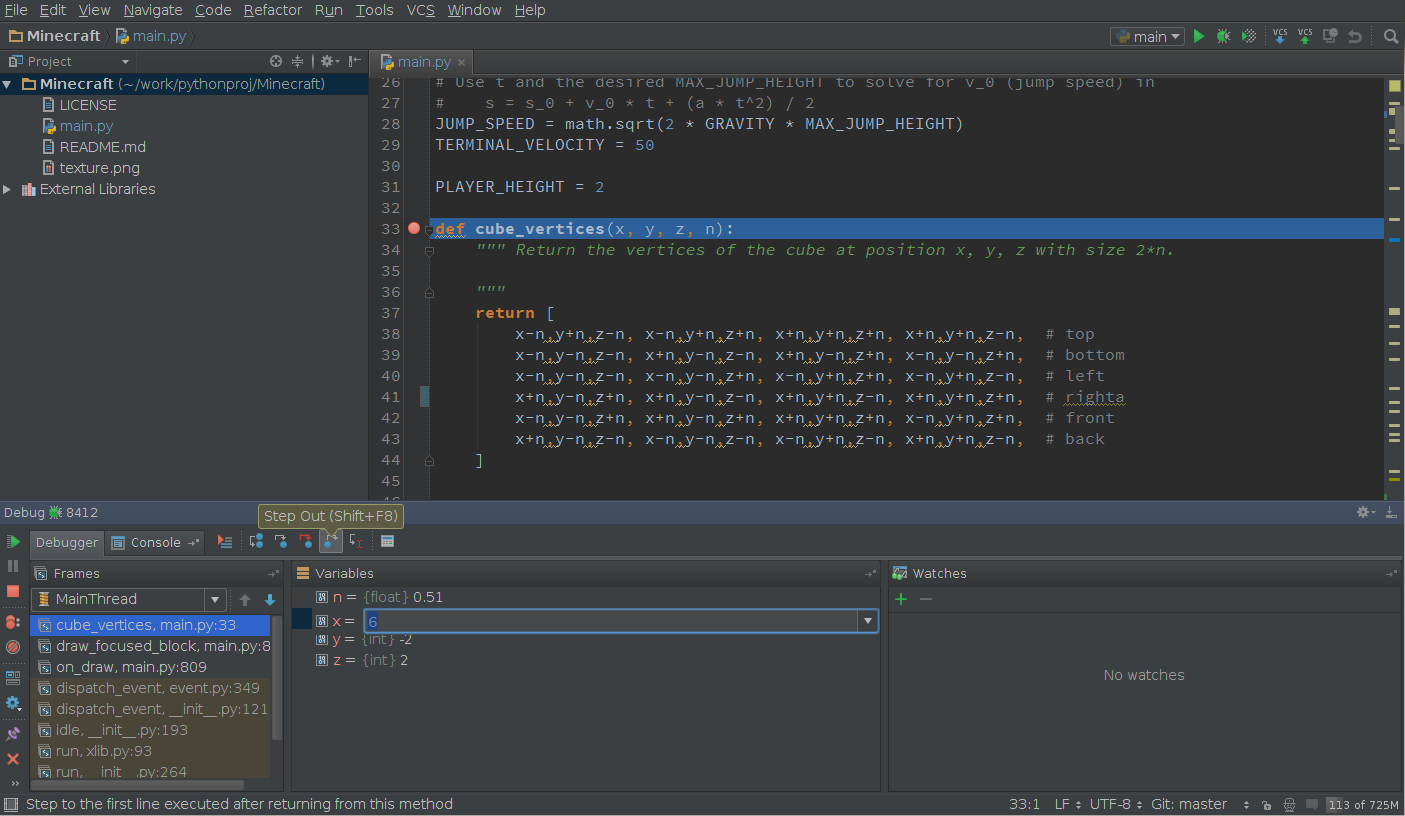 That’s it! Hopefully you’ll appreciate this addition to the new joint-effort PyCharm debugger, along with other handy features introduced in the latest version of PyCharm.

And if you’re craving for yet more details on PyCharm debugger, see this tutorial or the online help.

See you next week,
Dmitry

If you are like many Python developers out there you LOVE writing code! Tests? Not so much. Whether it’s the concept of testing or the interface of testing tools, testing is a chasm not all developers cross. The Visual Testing with pytest tutorial aims to bring Python testing to the masses, taking a new approach to first contact with Python testing. Join this journey with us and improve your testing skills in this 9-step tutorial! The tutorial As mentioned before, this tutorial was split into 9 steps. The idea is to make each step unique so you can watch and apply your lea

R plugin is announcing some helpful features to track execution of your R code: 1. Execute your R file as a runnable process, job. Jobs are shown in a separate tab in the R console. You can preview the job status (succeeded or failed), the duration of the execution, and the time you launched the job. When starting a new job, you can specify the way you want to process the results of the job execution. You can restrict copying it, copy to the global environment, or copy it into a separate variable. To preview the results, switch to the Variables pane: 2. Try new ways to quickly

PyCharm 2020.1 comes with new Database export features that make exporting data easier. You can now see previews of the data that you want to export, letting you have a quick glance of what the data will look like. Furthermore, as many of our users prefer to export to Excel files, we've also added the ability to export Excel files as well. As a note, there is no preview for Excel, as it is a binary file. To add to this, PyCharm now lets you save your scripts into configurations, so that you can run them whenever you want to. Not only can you type in the script directly, you can also

Although it has not been a while since our last update release, we’re ready to announce some important enhancements and new features: Long-awaited support of R 4.0.0 . Download it and try with the R plugin for PyCharm. In response to your feedback, we improved user interface and workflows for exporting generated plots into the portable network graphics (.png).  Just pull the lower-right corner of the plot to adjust its size. There are more helpful options to keep up the image quality. You can also enable opening the exported image right after clicking the Save button. Want to have your