Develop Django Under the Debugger

PyCharm Professional has long had great support for developing Django applications, including a run configuration tailored to the Django server. This winds up being a wonderful workflow, with a tool window showing the server output.

Sometimes, though, you hit a problem and want to debug your code. You stop the server, run it under the debugger, and do your debugging. Which also works really well: PyCharm’s visual debugger is a key selling point and integrates nicely into Django (e.g. template debugging.) And recently, PyCharm’s debugger has undergone dramatic speedups, especially when using Python 3.6. In fact, running under the debugger is approaching the speed of normal run configurations.

But still, it’s irritating to stop you server, restart under the debugger, stop the server, and restart under the regular runner. It messes up your flow, and you’ll be tempted to blasphemy of debugging with print().

So let’s break with the past with a crazy idea: always run under the debugger when developing Django.

Note: If you’ve taken Kenneth Love’s fantastic Django Basics course at Treehouse, you might recognize the code in this blog post. Enjoyed watching their approach to teaching.

Let’s start with the “normal” path. PyCharm usually makes a Django run configuration automatically, but if not, here’s how to do so: Run -> Edit Configurations -> + -> Django Server: 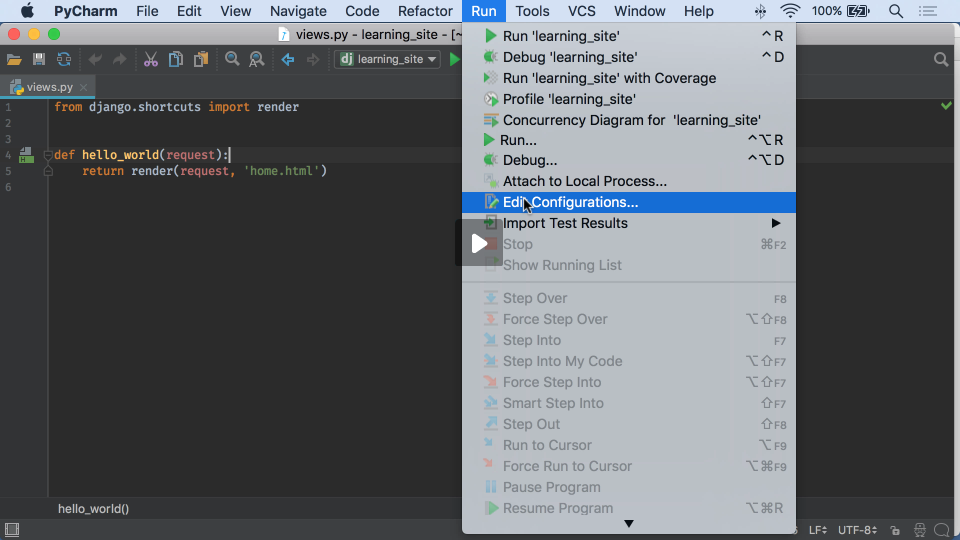 With this run configuration selected, click the green play button to start the Django server: 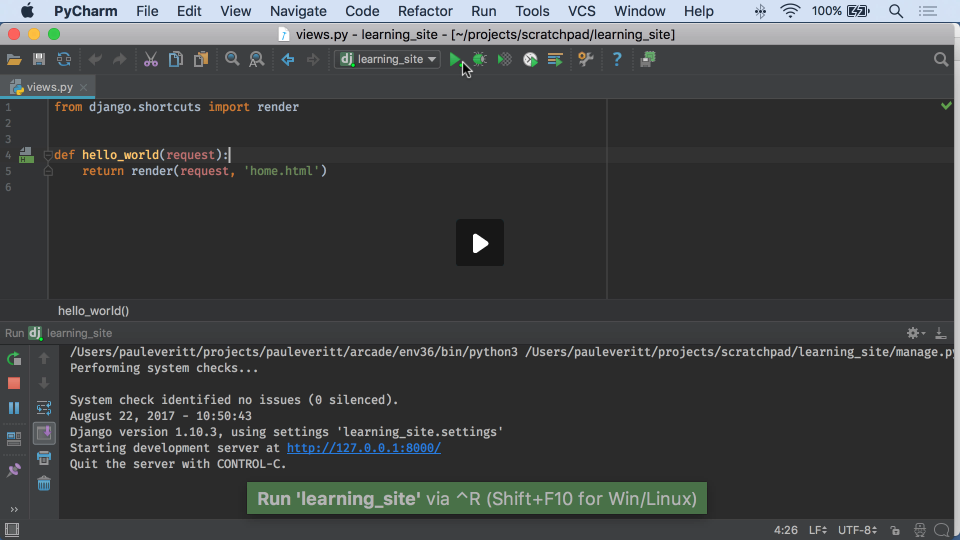 When done, click the red button to stop the server: 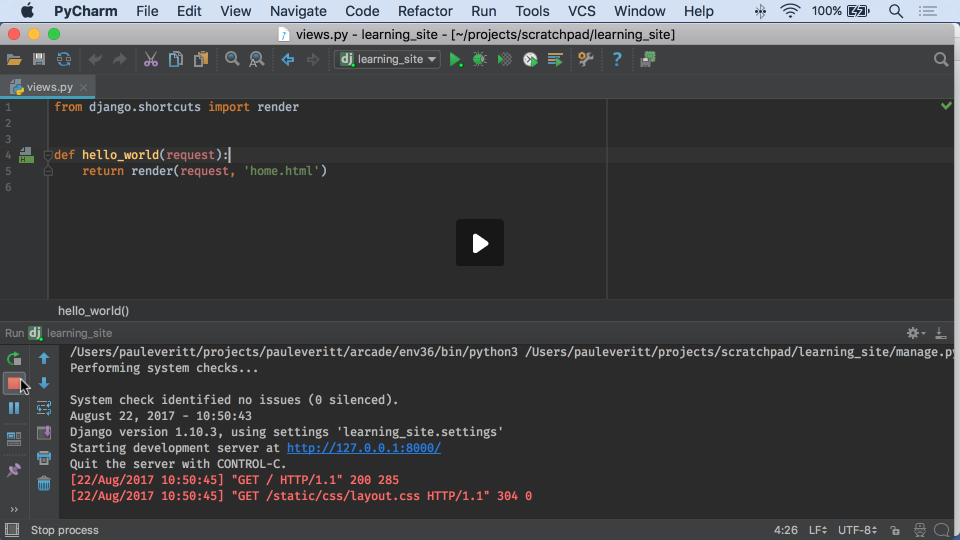 You can also restart the server, use keystrokes instead of the mouse, let Django restart automatically on code changes, get linked tracebacks to jump directly to errors, etc. 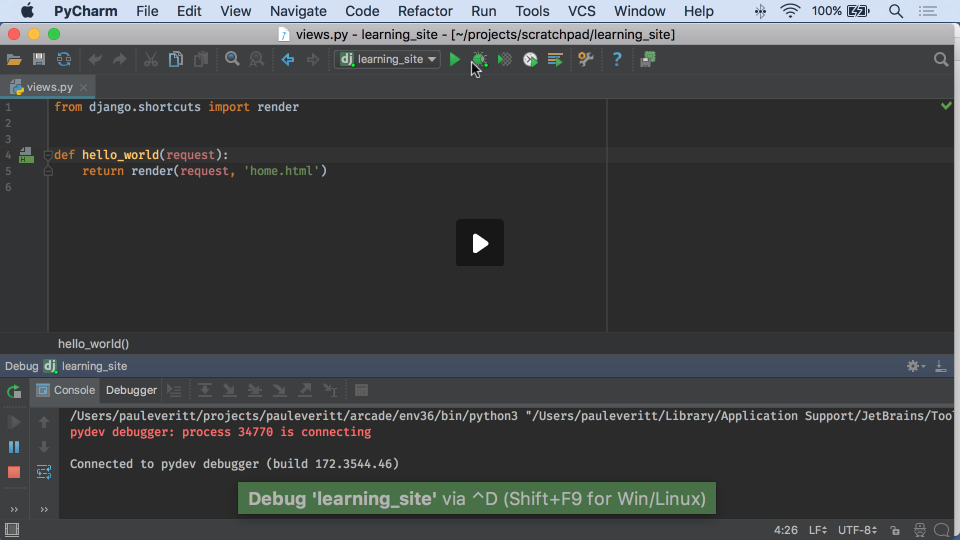 Note: If you get a link saying you can compile the debugger speedups under Cython (on Windows, we ship it by default), click the link, the speedups are worth it. 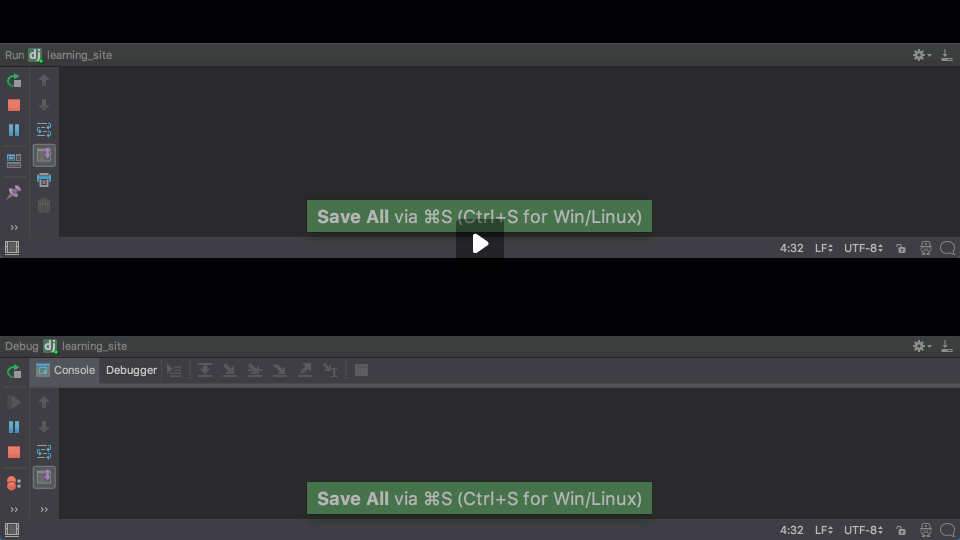 As you can see, the debugger’s restart hit isn’t that big, certainly compared to the savings versus other parts of your development workflow (e.g. moving print statements and reload versus moving breakpoints without restarting.)

I can proceed as normal, writing new views and trying them in the browser or the built-in REST client. But when I hit a problem, I don’t reach for print() — no, I set a breakpoint! 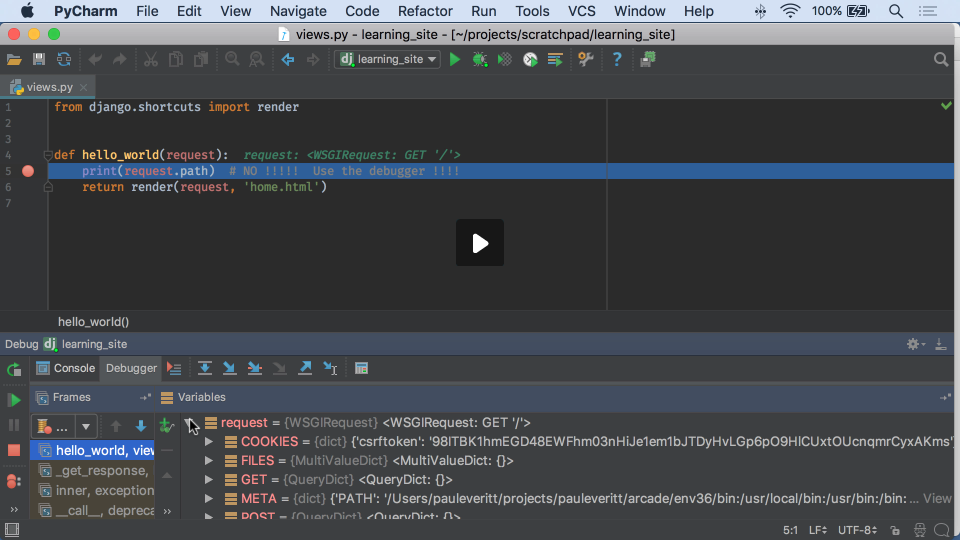 In fact, I can set a breakpoint in a template and then poke around at that line of template execution: 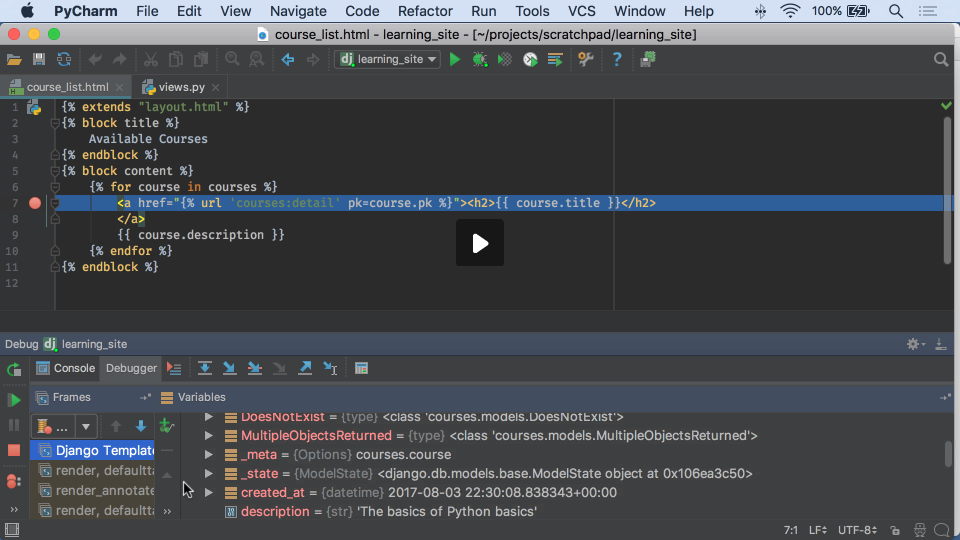 Much better than random print statements, which require a restart each time I want to inspect something. 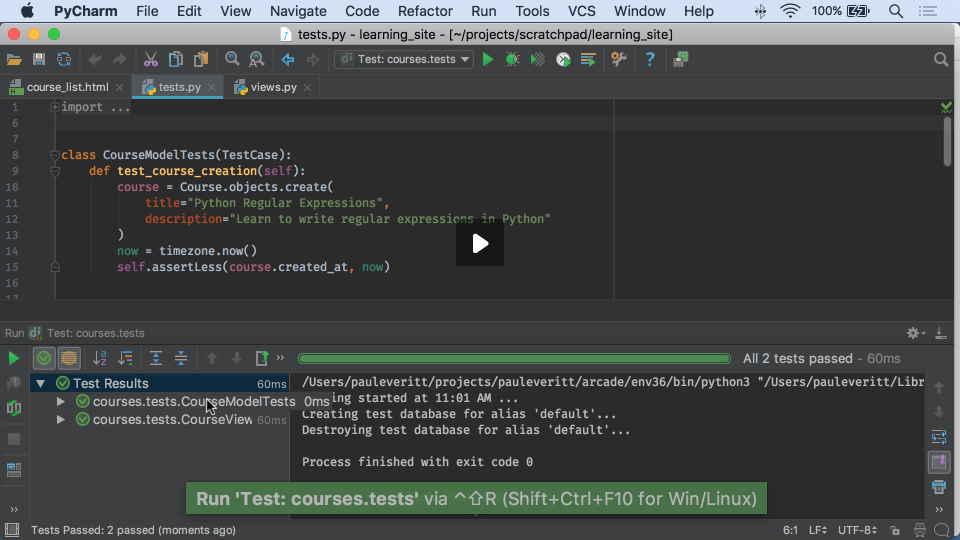 But you can also launch your test runner under the debugger: 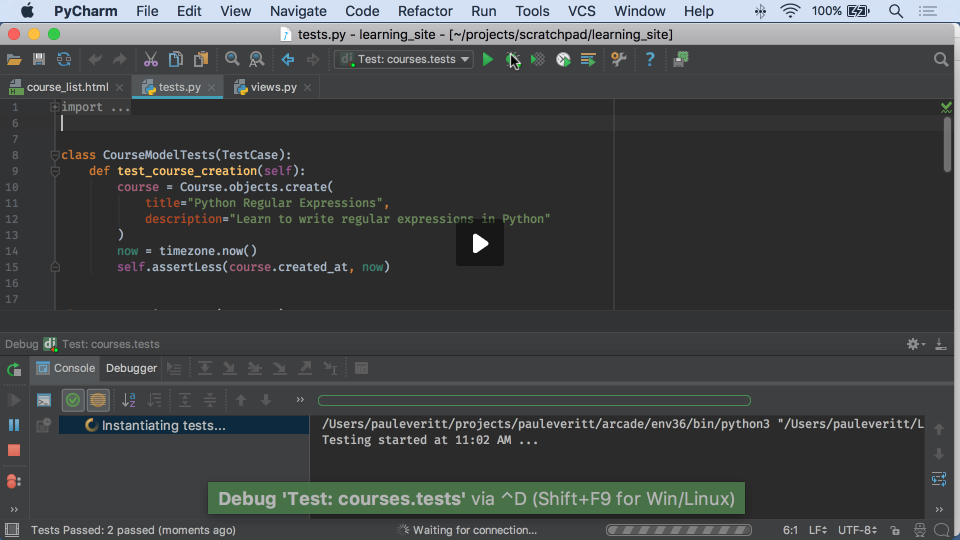 Test running under the debugger is an interesting case. Often with testing you are exploring, and sometimes, you are actually intending to produce bugs when writing a test case. Having the debugger close at hand can fit well with TDD: 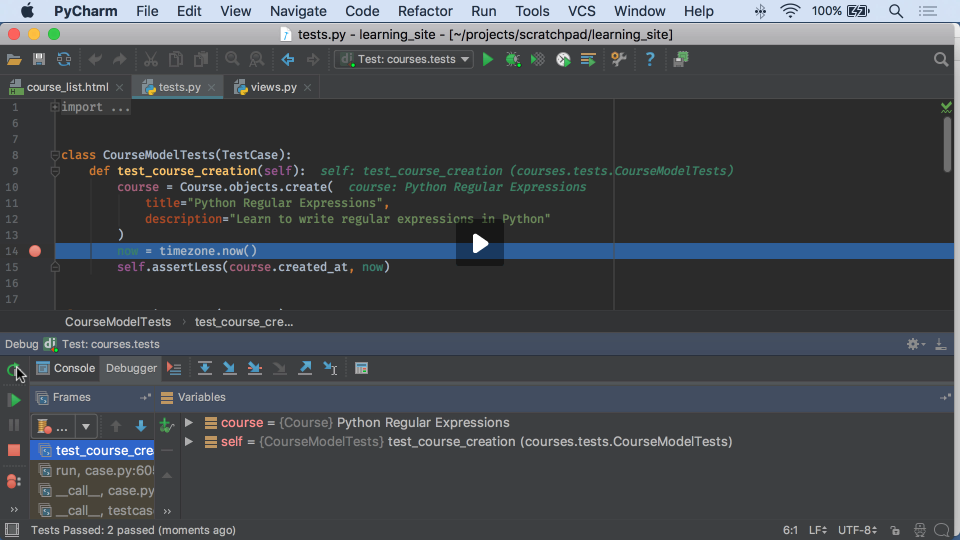 No free lunch, of course. Even if we have increased performance, dramatically for Python 3.6, there is still a speed hit. Not just on startup, but on execution.

You may run into quirks in obscure usages. For example, when running pytest tests under the debugger, you can’t get to the console (known issue slated to be fixed in 2017.3.) Also, tracebacks might be longer since the code is running under pydevd.

At two recent conferences I mentioned this — do your Django development under the debugger — to people who visited the booth. The reactions were fascinating, as a look of horror turned to confusion then curiosity ending with interest.

For some, it might never fit your brain. For others, it might make all the sense in the world. Want to tell me I’m crazy? It’s possible. Leave me a comment below with any feedback.

If you are like many Python developers out there you LOVE writing code! Tests? Not so much. Whether it’s the concept of testing or the interface of testing tools, testing is a chasm not all developers cross. The Visual Testing with pytest tutorial aims to bring Python testing to the masses, taking a new approach to first contact with Python testing. Join this journey with us and improve your testing skills in this 9-step tutorial! The tutorial As mentioned before, this tutorial was split into 9 steps. The idea is to make each step unique so you can watch and apply your lea

PyCharm started its life with Django support and our new release adds some useful improvements for Django coding. Let's take a look at support for custom Django tags in PyCharm Professional 2020.1. But First, One More Thing Maybe it's bragging, but we need to show one existing feature related to this topic. When you're in some general Python code and you need something imported, PyCharm will give you visual cue -- a warning -- as advanced notice: To fix it, Alt-Enter can do it for you. No need to stop what you're doing, go to the top, type in the import, then find your way back: But what abo

The release of Python 3.8 brought new features to the Python coding realm. The language is evolving according to its community's needs by addressing cases where new syntax or logic become necessary. From new ways of assigning expressions to restriction of usage of function declarations, calls, and variable assignations, this latest release presents new options to code. Of course, PyCharm couldn’t get behind, so we now support some of the major features coming with this new version. This article will walk you through the features currently supported by our latest PyCharm release. To try them

Hi there! Have you tried Jupyter Notebooks integration in PyCharm 2019.2? Not yet? Then let me show you what it looks like! In this blog post, we're going to explore some data using PyCharm and its Jupyter Notebook integration. First, of course, we'll need said data. Whenever I need a new dataset to play with, I typically head to Kaggle where I'm sure to find something interesting to toy with. This time a dataset called "Pizza Restaurants and the Pizza They Sell" caught my attention. Who doesn't love pizza? Let's analyze these pizza restaurants and try to learn a thing or two from it