You’ve probably got used to utilizing the power of RubyMine’s refactorings, have you?

One of the cool refactorings we have in RubyMine is ‘Introduce variable’ that lets you quickly create variable from a statement and replace all similar occurrences in the code.

Here is the slide-cast showing it in action.
Step 1: Place caret on a variable you want to inline and select Refactor | Inline… from the main menu or context menu. Or, even better, learn the keyboard shortcut. 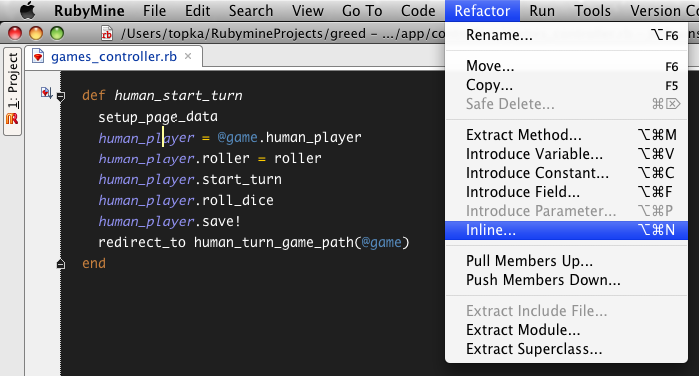 Result: Your code is updated 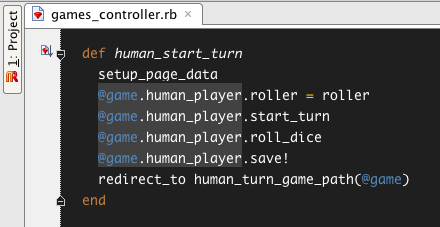 This new refactoring will be available in the next RubyMine EAP build. You can download the latest build now and try other new refactorings we’ve been adding lately.

BTW, have you pre-ordered the “Refactoring: Ruby Edition” book already? Should be a good one.

Ruby can be refactored!

For the screenshots and my refactoring tests I use excellent ‘Greed’ project created by Jim Weirich and Joe O’Brien for their “Testing, Design, and Refactoring” tutorial during RailsConf 2009. Thanks guys!

RubyMine 2022.2 EAP4 is here! Catch up on all the new features by checking out the previous EAP blog posts. Below you can find the most notable improvements. Support for YARD macros We’re continuing to improve our YARD support. Now RubyMine recognizes YARD macro extensions and provides general coding assistance for them. Use the Go to declaration action on a macro reference to jump to the corresponding macro declaration. In the main menu, go to Navigate | Declaration or Usages or press ⌘ B (macOS) / Ctrl+B (Windows). RubyMine allows you to search for usages of a macro declaration by invoking

Hi everyone, The Early Access Program for the upcoming version 2022.2 of RubyMine is now available. As always, you are welcome to try the new features before the official release, and we are looking forward to hearing your feedback. Here are the main highlights of the first EAP build: Debugger We’ve improved RubyMine’s debugger to make it more robust for Ruby 3 and onward. Starting with this EAP, you should be able to debug your Ruby 3 and up code without any major issues while using all the fancy features provided in the GUI, such as stepping through the code, evaluating expressions, and