A new way to compile
News

A new way to compile

Together with the IDEA 12 release Scala plugin brings a brand new Scala compilation subsystem. Here are the main updates:

Of course, a lot of explanations is needed to clarify all the details.

External build is a one of the major features of IntelliJ IDEA 12.

External build implies that all compilation tasks (including project model interpretation) are performed in a separate process, fully isolated from the main IDE’s process.

As a result, we can:

Now we can compile IDEA projects without running IDEA itself, e. g. from command line or from build tools (like Ant, Maven, etc.).

An additional benefit is an ability to use an automatic background compilation, so that your project will be kept in compiled state all the time.

Background compilation can be also used as a means to reveal code errors when type-aware highlighting can’t keep up with code complexity.

For more information on external build you may check the Brand New Compiler Mode in IntelliJ IDEA 12 blog post.

Although “SBT compiler” sounds like a completely new kind of Scala compiler, that is not really so. To see what SBT compiler is and how it fits into Scala compilation, let’s start with a “big picture”.

Here are the main tasks we need to perform during Scala project compilation:

So, bytecode is still generated by Scalac (and Javac), project format is still IDEA’s, but incremental compilation is now handled by SBT instead of IDEA (so, we don’t use SBT project model, only SBT compiler, that acts as a wrapper around Scalac).

What’s the point of such an update? – Because there is a qualitative difference between how IDEA and SBT discover dependencies and process changes.

IDEA analysis is bytecode-based and language-agnostic. While it’s a very fine-grained, robust and time-proved method, there may be some rare unexpected glitches, specific to Scala code.

For example, let’s define a class C (in C.scala):

and then “add” a method name via an implicit conversion (in Main.scala): 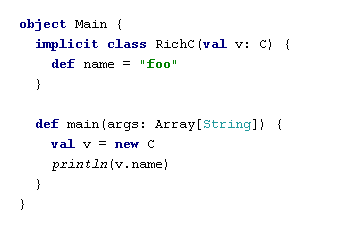 After we compile and run the main method, we will see that the output is “foo”, and that’s what we expect it to be.

Then, let’s add a “real” method name to the class C:

After the next compilation, we will discover that the output is … still “foo”, and that is is not what we expected… Why so? – Because, in terms of the bytecode, there’s no need to recompile Main class yet.

There are many additional cases (for example, related to named- and default parameters) which demonstrate, that bytecode analysis is not enough for proper incremental compilation of Scala code.

That is where SBT compiler comes to rescue, because it relies on source-based analysis of compiled code (to do that, SBT intercepts internal Scala compiler data), so it can take account of Scala-specific details to perform incremental compilation correctly (though SBT analysis of Java classes is still bytecode-based).

As a bonus, because SBT uses a so-called compiler interface layer to communicate with the Scala compiler, we can now run multiple versions of in-process Scala compilers in the same JVM. That’s how we can:

It’s worth noting, that there is a one side-effect of using SBT compiler, resulting in how Java files are handled in Scala projects (ones with a least one Scala facet). Because we need to maintain a coherent model of dependencies, compilation of all Java files, event in “pure” Java modules, is routed through SBT. For most use cases that is perfectly OK, unless you need to use a non-standard Java compiler (by the way, SBT supports in-process Java compiler as well).

For more information on SBT compiler you may check Understanding Incremental Recompilation article in SBT documentation.

Scala compiler is a quite complex piece of software, so it takes time to load and initialize it. When you compile a project with hundreds (or thousands) of files, this time is negligible comparing to the time needed to compile the code. However, when incremental compilation is used, and all you need is to re-compile a few files, it may take longer to warm-up a Scala compiler than to actually compile those files.

One solution to this problem is to run Scala compiler in-process to avoid compiler re-instantiation when compiling subsequent modules. This, however, still cannot liberate us form a first compiler initialization. To speedup compilation further, we need to use a pre-initialized compiler instance, and that is exactly what compile server does.

Originally, Scala compile server was implemented via FSC (Fast Scala Compiler). While it works well enough, it has several limitations:

Now, because of our newfound ability to run multiple versions of Scala compiler in a single JVM, we can do better than that. New compile server is implemented using Nailgun (basically, it’s just a JVM process that can be accessed via a TCP/IP connection), so:

It’s recommended to use the following JVM parameters for the Scala compile server:

If compile server is not used, it’s still recommended to use the same parameters (except, maybe, -server) in Project Settings / Compiler / Additional compiler process VM options.

How all this is related to Zinc

Zinc is a stand-alone launcher for SBT incremental compiler (and Nailgun server). It was created, primarily, to be used in command line tools (like Scala Maven Plugin).

Because both Zinc and the new compilation subsystem use the same tools and techniques, they are essentially equivalent. There is not much sense in using a launcher from another launcher, so we run both SBT compiler and Nailgun directly, rather than via Zinc.

Besides, we need much more data from the compiler (to display compilation messages, report progress, compile UI forms, run annotation processors, etc.) which is not available from Zinc output. Zinc’s Nailgun server also cannot be used by IDEA because its process is started without IDEA-specific classes (communication protocol) in JVM classpath.

Let’s sum-up all the advantages of the new Scala compilation subsystem:

There must be a catch in it somewhere, you know… And here it is – because the new compilation subsystem is written completely from scratch, some bugs are simply inevitable. Please, report them so we can fix them as soon as possible.

Keep in mind, that the previous compilation subsystem is still available, and can be always turned on by clearing “Use external build” checkbox in Project Settings / Compiler page:

You may also check there whether the external build is enabled in your existing projects.

For those who want to know even more details, here is source code for all the tools: