Today I’d like to share with you a plugin for TeamCity 6.5 that provides support for NuGet, the open source developer focused package management system for the .NET platform. What does the plugin bring?

The plugin adds dedicated build runner that allows you to: 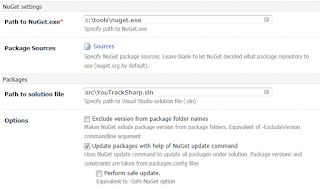 Note, that for installing and updating packages we use NuGet.exe install and NuGet.exe update commands respectively.

Once you start using NuGet Packages Installer in your build, you most likely will need to know the exact versions of packages used in the build, and that’s very easy to do – they are listed in the build results at the corresponding tab:

Do you want TeamCity to run a build if a build packages are updated? Easy as a pie – just add NuGet Dependencies Trigger to your build configuration. It will start a build if there is a NuGet packages update detected in NuGet repository: 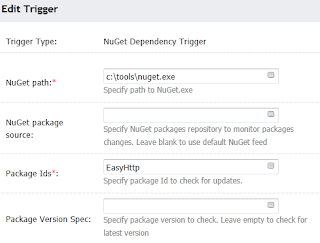 Eugene is a developer advocate at JetBrains, software developer, speaker, and blogger. His interests include software development, distributed systems design, cloud computing, and programming languages. Eugene holds a PhD in computer science; he writes code in Kotlin, Go, Java, C/C++, Kotlin/Native, and JavaScript. A Kotlin fan for years, he started using Kotlin before 1.0 and completed his first production Kotlin app back in 2013. He is known as @jonnyzzz
View all posts by Eugene Petrenko →
This entry was posted in FYI and tagged .NET, NuGet. Bookmark the permalink.

One Response to NuGet plugin