Our team is excited to announce the arrival of TeamCity 10.0, the jubilee version of our continuous integration and deployment server!

The number ten is regarded as the most perfect of numbers, as it contains the life and the nothing, the Unit that did it all, and the zero, symbol of the matter and the Chaos, of which all came out; it represents a new beginning at a higher level. 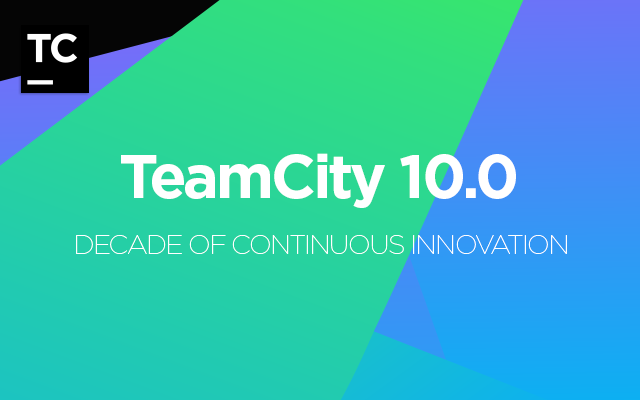 We literally follow the symbolism: TeamCity 1.0 saw the light in 2006, and 10 years (and BTW over 16 000 bugfixes!) later, TeamCity 10.0 is here! This TeamCity version comes with advanced features revolutionizing the way you create your projects and builds, making you TeamCity installation more scalable, expanding your horizons with new and improved integrations, all packed in the revised UI.

While so many of our users love the simplicity and ease of configuring projects and builds via the UI, for repetitive tasks like copying projects, build configurations, etc. the programmatic approach is by far more efficient. With TeamCity 10.0 Kotlin-based DSL you’ll enter a new world of creating and maintaining your build infrastructure, dynamically applying all your changes to the projects and builds, skipping the need to use the UI.

In this release another take on scalability has been made – now you can set up a two-node TeamCity, distributing the workload between two servers.

Issue trackers integration has been improved: TFS, GitHub, and Bitbucket are supported out of the box

This is just a teaser – for the full list of features see our What’s New  and Release Notes, and download TeamCity 10.0! Remember to check the Upgrade Notes before you install the new version!

Register for our webinar to see the new TeamCity 10.0 features in action!

P.S. We’ve also adopted a tradition of giving a decennial retrospective of the TeamCity UI, so take a look at our site to see how pretty our GUI grown to be!