This post was created in collaboration with a TeamCity .NET developer Nikolay Pianikov.

Microsoft has recently released .NET 5, a new SDK that unifies all the modern .NET tools. In anticipation of this, we have revised our integration with .NET in a new build runner that has been available since TeamCity 2019.2.3.

In this blog series, we’ll tell you about this new integration and take you through a demo project you can run on your server.

If you’ve worked with .NET in TeamCity before, you’ll already know that the variety of integration tools it provides can be pretty overwhelming. As Microsoft strives to combine all .NET functionality together into one SDK, we have also decided to streamline our approach to building .NET projects.

Most of the listed runners are now represented by a single .NET runner. This makes it much easier to compose your build projects and test them on multiple OSs using one transparent solution. The new runner supports:

We are still supporting the obsolete runners to give our users enough time to migrate. But, this support is limited and we are not going to be adding any new features to these runners. If you have not migrated yet, check out the .NET runner documentation for instructions. If you have any trouble migrating, please leave a comment or let us know about it via one of our feedback channels.

To illustrate the new approach, we’ve created a demo project. In Part 1, we will describe its structure. For more details and helpful tips, keep an eye out for the next parts of this blog series. If you’d like to follow along, you can clone the demo repository and run this project yourself.

This project has already been built on the demo TeamCity server. You can sign in as a guest and explore the build results.

The demo project runs, tests, and deploys a simple cross-platform app for displaying a clock. Its code comprises several subprojects:

To configure CI/CD for this source project, we’ve designed a hierarchy of projects and build configurations in TeamCity.

Though TeamCity has a friendly UI, we prefer to keep all configurations in Kotlin DSL. This way, it is easy to version project settings and reuse them. For example, you can just fork our demo source code and Create a project from its URL on your TeamCity server. There is no need to set up anything manually.
If you are curious about how to create configurations as a code, we recommend reading this blog series. 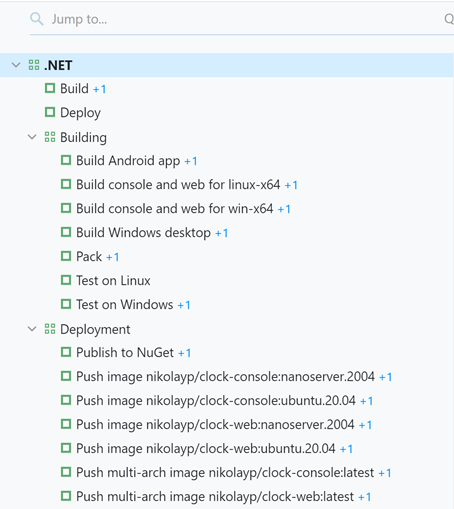 The “Deploy” configuration, predictably, deploys them into Docker and NuGet repositories:

This way, we build a hierarchy of configurations, each of which serves its granular purpose: one for testing on Linux, one for building an Android app, and so on.

Here’s the list of all parameters used in the build configurations:

You can include these parameters directly in project files or pass them via command-line parameters. By using system parameters, you don’t have to worry about the nuances of passing special characters as TeamCity will take care of all of it.

To run these configurations, we used the following build agents:

This was just the general structure of our demo project. In the next part of this series, we will talk about its build and test configurations in more detail. Meanwhile, you can explore this project yourself or read the .NET runner documentation.

Once again, your feedback is very important to us. Please let us know if you like the new .NET runner and what you expect from it in the future.