In the last two posts we talked a bit about how effective those approaches are for the author to learn and improve, because those two approaches focus on getting the code correct. The Design Evolution approach additionally mentions the value of the whole team seeing the evolution of the code.

This third approach for code reviews puts learning at the centre of the process — the purpose is not to check if the code is correct, but to share with other developers what changes have been made.

In this example, I’m assuming a slightly different approach to development. This team develops against master (or some other centralised development branch), and submits small self-contained commits that pass all the automated tests.

In this example we assume the team is not working on feature branches, but instead commits directly to some main development trunk. It’s important in these circumstances to have a CI system that runs all relevant checks, and that failures here are addressed with the highest priority

When I work on a fix or feature, as usual I’ll make changes in small, self-contained commits that pass all the tests. This should be the default way of working, of course, but when you’re committing to the main development branch this is so important, it ensures the whole team isn’t blocked on some breakage you introduced. Upsource integrates with your CI server so you can see at a glance the revisions that passed all the checks. 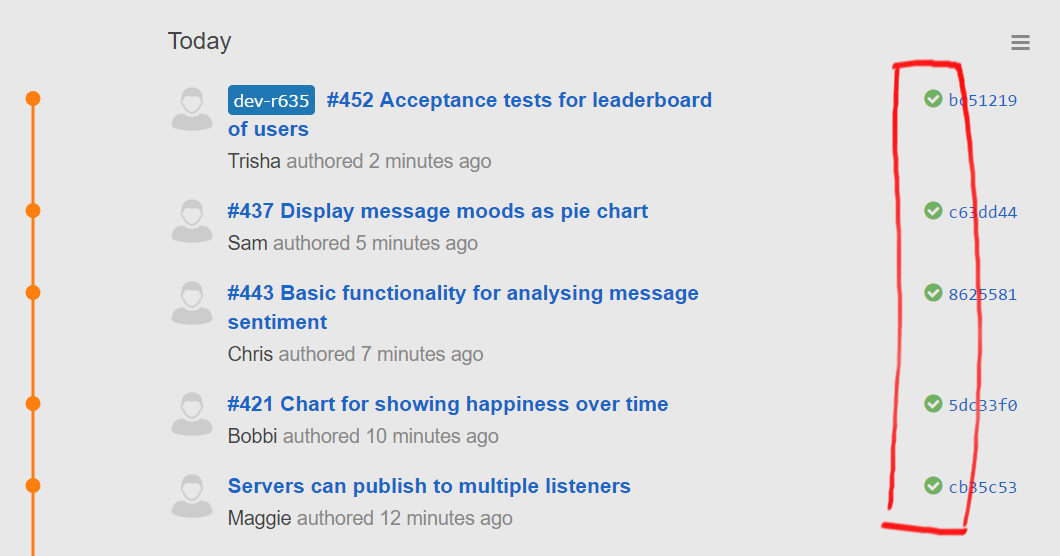 Upsource shows the result of the Continuous Integration build

In this code review process, I can either make each small change a tiny review in its own right, or I can batch them up into a single review when the feature is complete1. The first approach has the advantage that the review will be small, but there will be many of them. The second approach means the review will probably be bigger, but gives me much more freedom to experiment and evolve my design during implementation.

In Upsource, I can either choose to add each revision to the review via the UI… 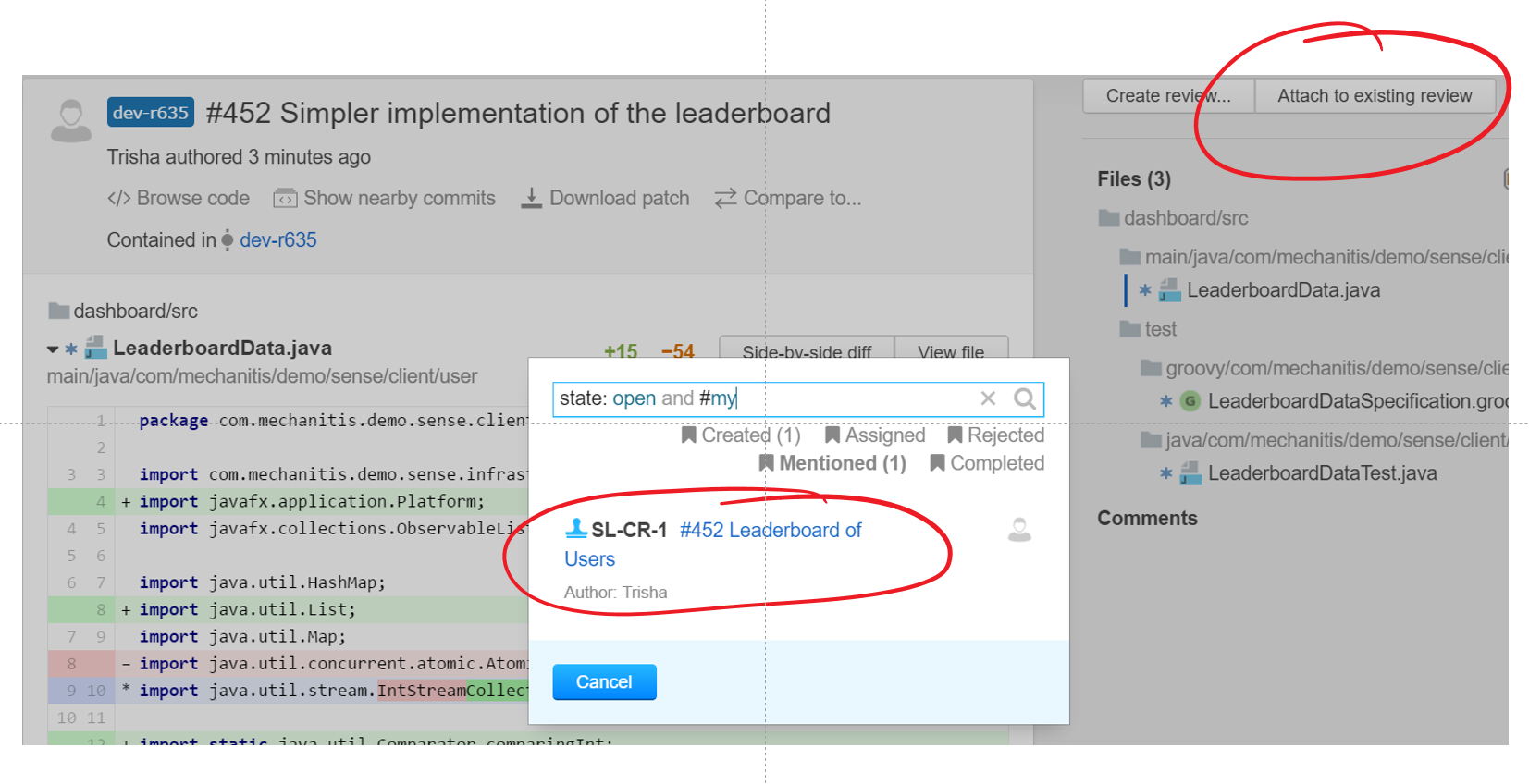 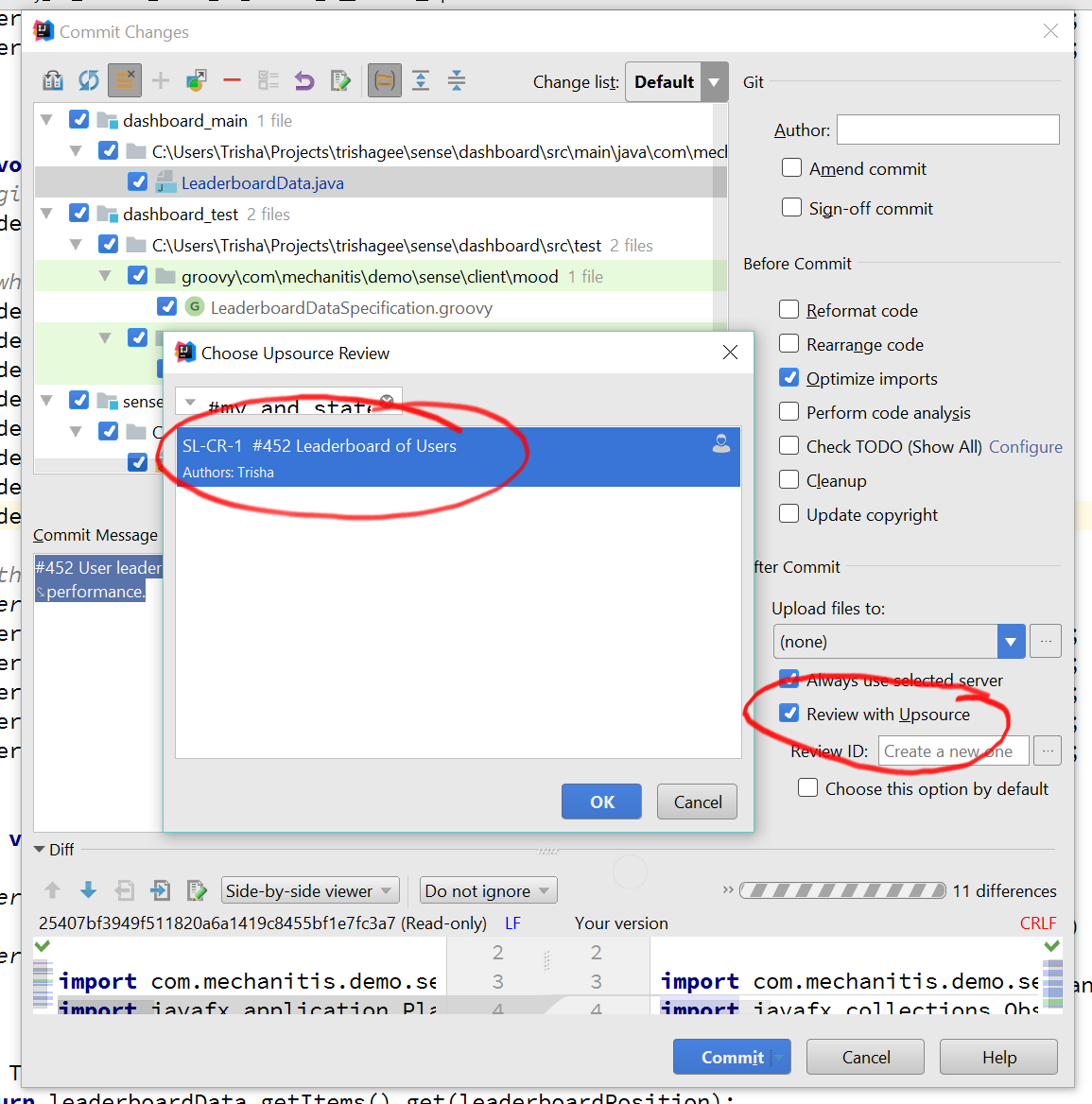 …or I can tag the commit with an issue number or code review ID to have it automatically added to a review. 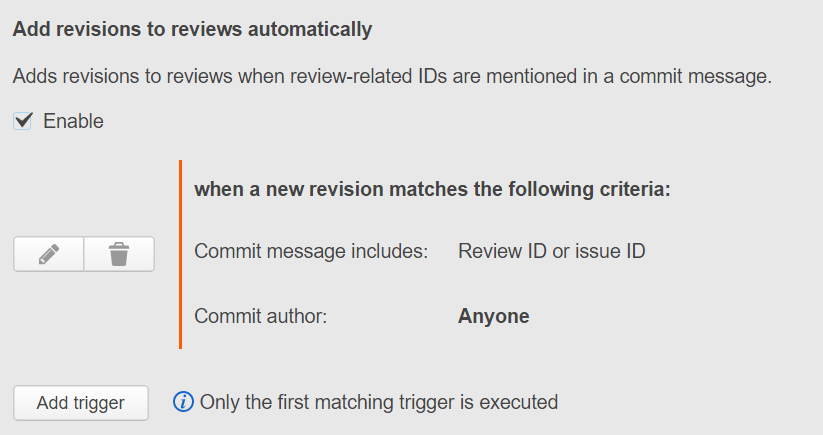 When the reviewer comes to look at the code, they have very different goals to either a gateway reviewer or a design evolution reviewer. Here, the reviewer’s goal is to read the code to: understand what functionality was introduced and see how the application code is evolving. Of course, the reviewer is still free to make comments and suggestions. If a reviewer doesn’t understand the code for any reason (poor naming, confusing design, missing tests to document features etc) this is an important point to raise — code is likely to be read more often that written, and if a team member cannot understand the code right now, when the current state of the code base and the context of the need for the fix or feature is fresh in their mind, imagine how much worse it will be in the future when all of this context is lost. 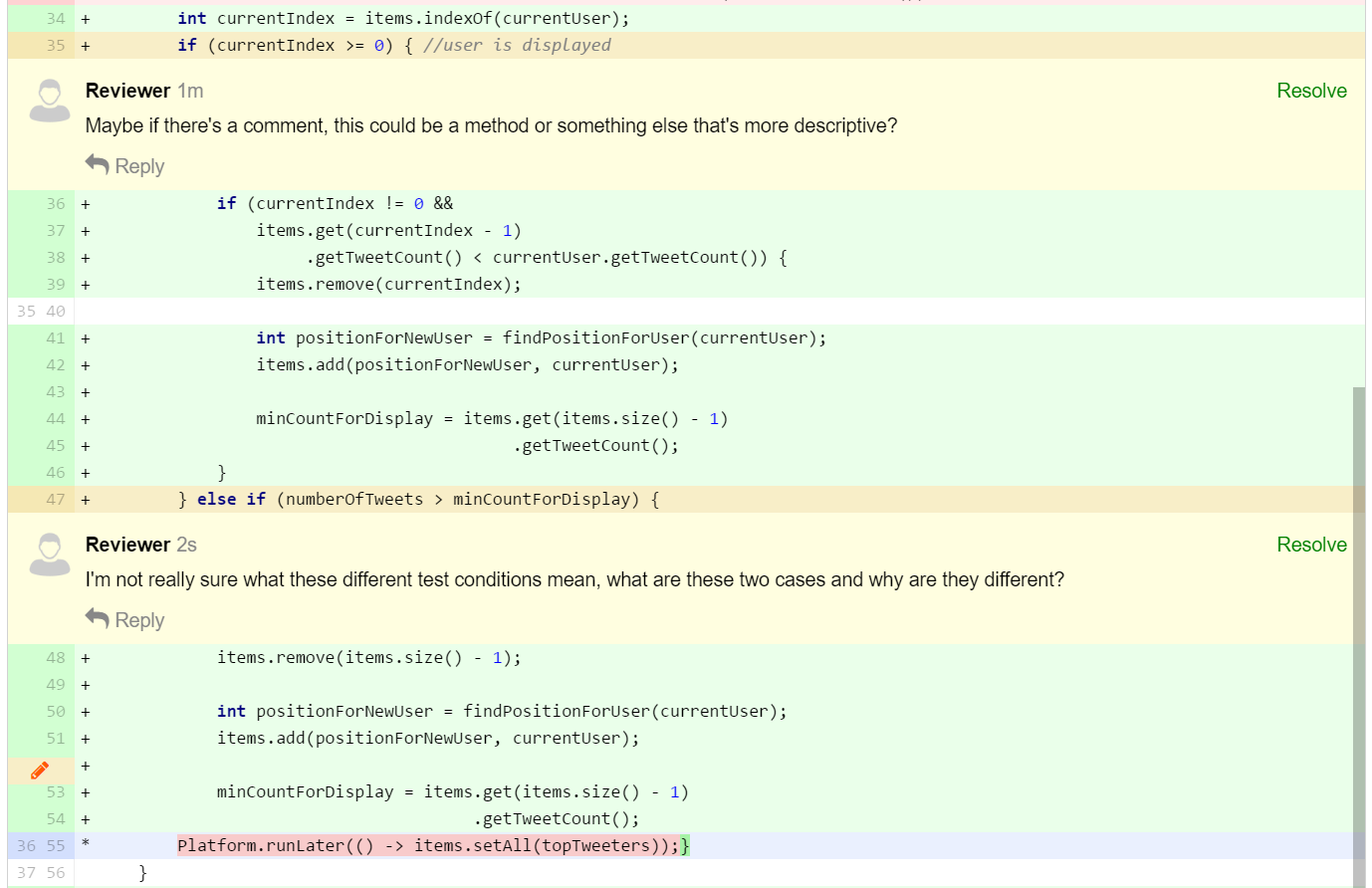 I can make changes based on these suggestions and also commit these straight into the development branch. I’ll get the reviewer to look over these changes too, to see if they address the original problem. 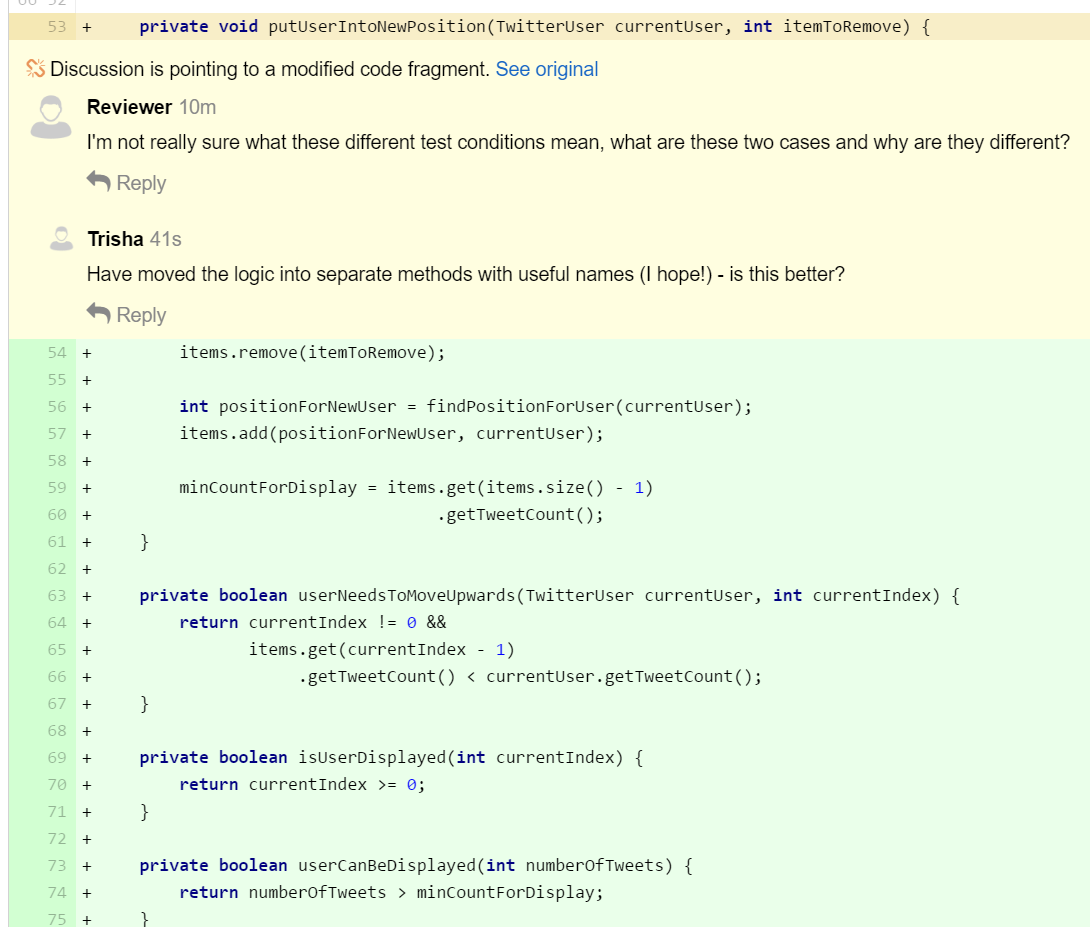 As always, I can guide the reviewer, and future code-readers, by leaving comments in Upsource to document the more obscure code, or make notes of possible future changes.

By having these comments in Upsource but not attached to a review, future readers of this code will be able to see what my intentions were.

Here the main beneficiary of the code review is the reviewer not the code author. It’s a way to encourage ownership of the whole code base by the whole team, without everyone having to work on all sections of the code.

It also emphasises code readability. While enforcing standards or design approaches will help readability, these may be too heavy-weight for many teams. Peer-reviewing code can improve the readability by focusing on small but important things like naming and understandable tests.

This process does not act as a gateway. Code is already merged, it’s assumed to be working as all tests pass. Any suggested changes can be made later, and made directly to the development branch as well.

The reviewer can be junior or new, they’re not acting as the guardian of the code design. Many teams see this as a good way to get people up to speed on their whole code base with fairly minimal cost to the more experienced developers on the team.

1 “Complete” meaning passes all appropriate tests, e.g. acceptance tests, and/or meets the acceptance criteria set in the issue
2 Of course, these reviews are still more likely to catch problems than no reviews at all

As of February 1, 2022, we will no longer sell new licenses or renewals for Upsource or Upsource user packs. We will continue to provide technical support and critical security updates until January 31, 2023. After this, no further updates or technical support will be provided. Why we are discontinuing Upsource Over the past decade, we’ve seen a gradual industry trend of moving away from

This release introduces a variety of improvements related to GitHub and GitLab synchronization as well as some other features. Please read the release highlights for details. (more…)

Upsource 2018.2.1141 is out! We have fixed some regressions introduced in 2018.2. The bundled Hub was updated to version 2018.4.11052. If you've already upgraded to 2018.2 from an earlier version, please do the following after installing this update: Run `lib/upsource-console.sh` from the Upsource home directory (or `lib\upsource-console.bat` if you're running Windows). Run `fix-delete