CakePHP2 comes with unit testing support powered by PHPUnit. In addition to the features offered by PHPUnit, CakePHP offers some additional features to make testing easier. Unit tests in CakePHP rely on a custom test runner which can be run in the browser or using the CakePHP console. More information on unit testing with CakePHP can be found on their website.

Before we can make CakePHP unit tests run in PhpStorm, let’s find out how PhpStorm runs unit tests in the first place. A good way to discover this is by creating a simple project in PhpStorm and adding a unit test run configuration to it. The unit test tab shows us what is happening under the covers.

When scrolling a bit to the right, we can see PhpStorm is invoking a script named ide-phpunit.php which it stores in a temporary location on our system. What’s interesting is that this file is not deleted immediately after the test run, so it can be opened just like any other PHP file. Let’s have a look inside. 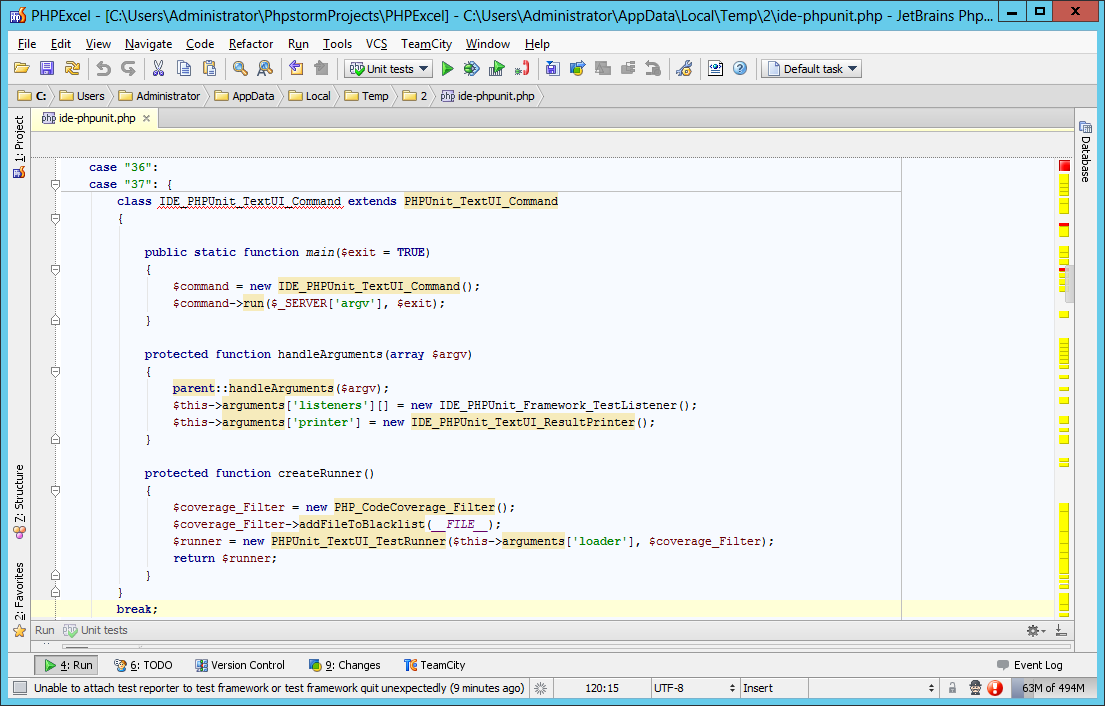 The script ide-phpunit.php is a simple wrapper around multiple versions of PHPUnit, returning unit test results to the IDE. It contains several classes, like IDE_PHPUnit_TextUI_Command (extending PHPUnit_TextUI_Command) which is a custom PHPUnit test runner. Since CakePHP uses a similar approach for bootstrapping their unit tests, we may be on to something!

Some of the most interesting lines of code in this file are the following:

If we scroll to the bottom of this file, we can see the following statement:

This command kicks off the actual test run. Based on these pointers, let’s craft a custom test runner for PhpStorm which bootstraps CakePHP unit tests! 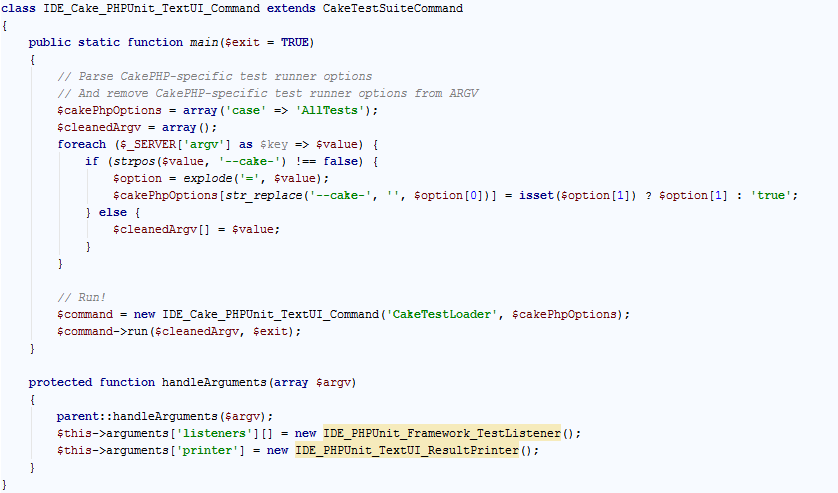 Using some custom argument parsing in the main() function, we can provide CakePHP’s test runner with some additional parameters which are not supported by PHPUnit directly. The loop over the argument values being passed in strips out any command-line switch which starts with –cake- and passes it to CakePHP’s test runner as custom options. Using this approach we can later use a –cake-case=AllTests command-line switch to instruct CakePHP which tests to run.

The handleArguments() function is a blatant copy-paste from the ide-phpunit.php script. It configures PHPUnit to report test results back to PhpStorm using a custom test result listener.

We can save this file in the root of our project and name it cakeunit4phpstorm.php. If you’re interested in the complete source code already, it’s available from here.

We’re not there yet. There is one major issue we can not solve: PhpStorm always creates a fresh copy of ide-phpunit.php. Hence we can not add our custom test runner code nor invoke it from that script. Hrm, now what?…

Fortunately, test run configurations in PhpStorm provide us with an option to specify PHP interpreter arguments. And PHP has this lovely -f switch which allows us to provide a custom script to run… 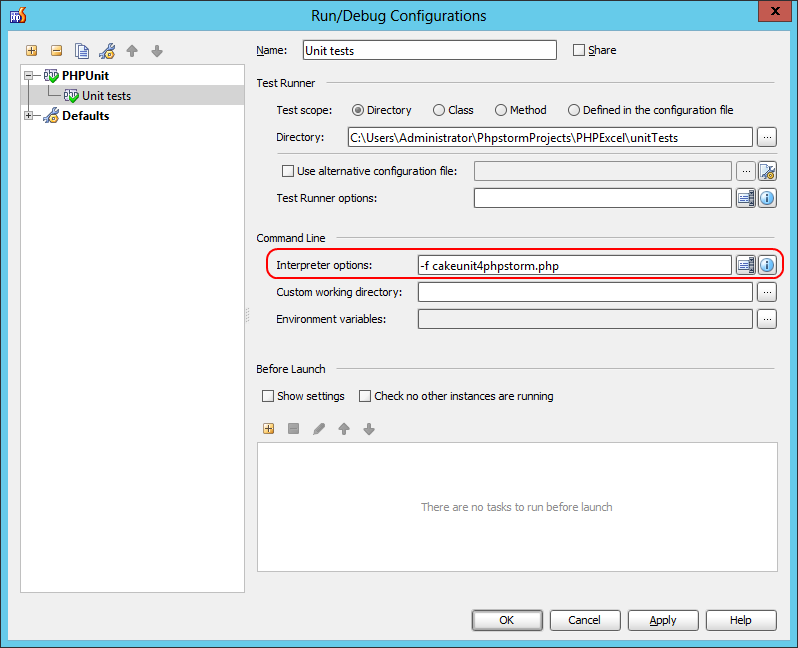 If we now run our unit tests, the custom test runner we’ve created is invoked but it’s not yielding the results we expected from it… The reason for that is we’ve removed every association with the ide-phpunit.php script and classes therein. Back to the drawing board.

In the cakeunit4phpstorm.php script, let’s apply a small trick to the arguments being passed from PhpStorm.

The first loop we’re doing is intended to “clean” argument values. We’re interested in keeping all command-line arguments except if it is the path to ide-phpunit.php. Why not, you ask? Well, PHP will get confused if we pass it two scripts to run, hence we’re removing PhpStorm’s generated test runner from the command-line arguments. Note we do store the path to ide-phpunit.php as we want to include it later on.

Before including the original PhpStorm test runner, we want to make sure it’s not invoking itself. The last line of it was IDE_PHPUnit_TextUI_Command::main(), we want to be sure that line is not included by simply commenting it out.

Finally, we include ide-phpunit.php and all classes in there to make use of what is already in the box: a means to communicate test results with PhpStorm.

Let’s put our new test runner to the test. If you haven’t done so yet, add cakeunit4phpstorm.php to your project root. Its sources are available from https://gist.github.com/4529548. 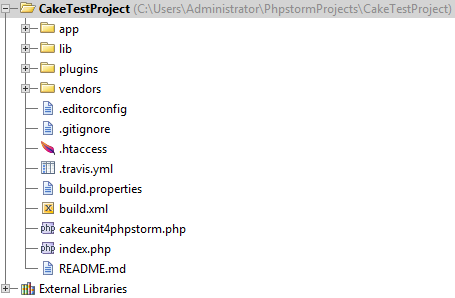 Next, create a test run configuration for your CakePHP project. Make sure to specify test runner options according to the arguments you would normally use with ./Console/Cake test. These arguments should be in the format –cake{var}={value}.

Finally, make sure the PHP interpreter options are specified. The value for the -f switch should be the full path to cakeunit4phpstorm.php.

Here’s an example configuration for running all core tests: 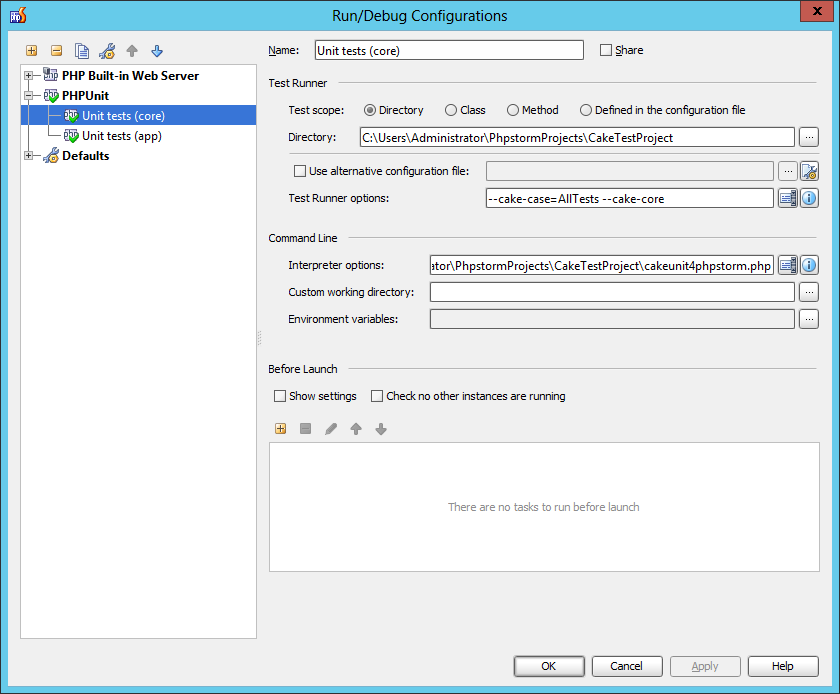 We can now run this test configuration and get results from CakePHP unit tests in PhpStorm. We can inspect CakePHP test results right from our IDE. 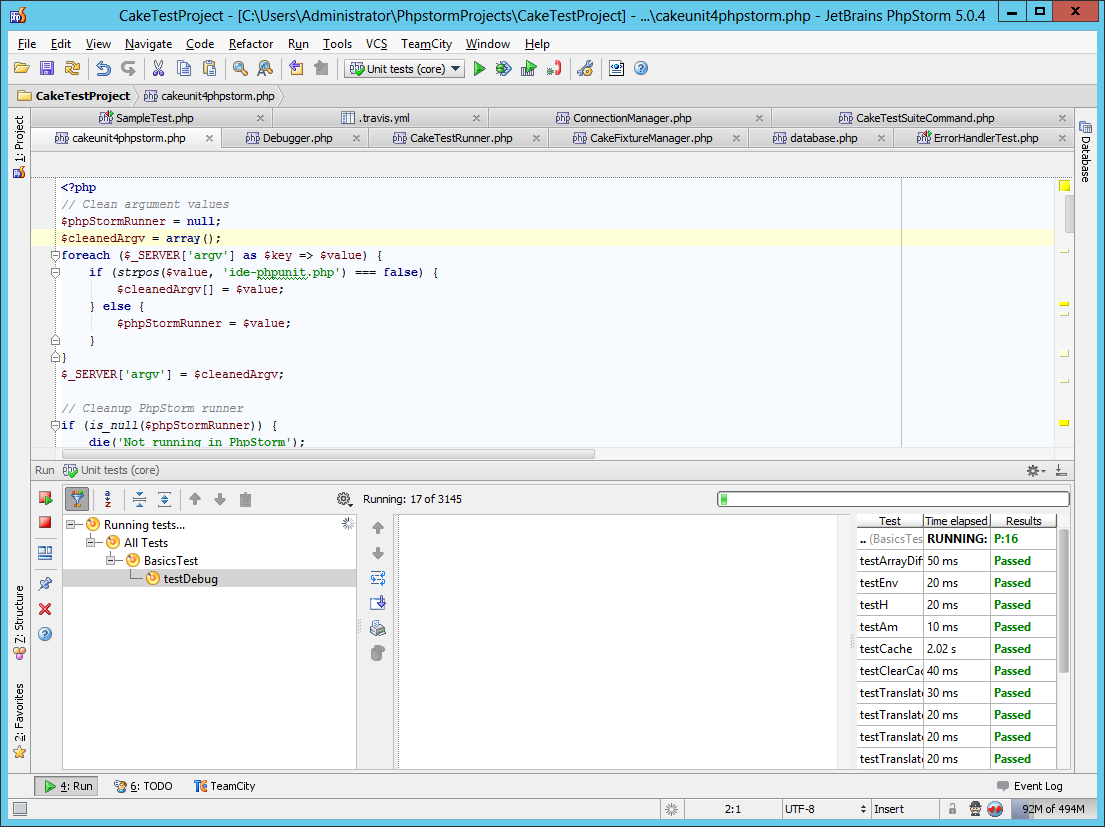 PhpStorm provides us the possibility to connect to Windows Azure SQL Database right from within the IDE. In this post, we’ll explore several options that are available for working with Windows Azure SQL Database (or database systems like SQL Server, MySQL, PostgreSQL or Oracle, for that matter): Setting up a database connection Creating a table Inserting and updating data Using the datab

A very powerful refactoring is the Change signature refactoring in PhpStorm. It enables us to modify a function signature in many ways: we can change the function name, change its visibility, add, remove and reorder parameters as well as rename parameters. (more…)

Folding for imports in PhpStorm 6.0

In PhpStorm 6, we've introduced code folding for imports. Any list of imports will now be folded into a single line. This greatly reduced clutter in your editor when having a lot of imports! (more…)

The Remote Host pane allows us to work directly on a remote server through FTP, FTPS, SFTP or a local/network folder. A lot of people asked us to add drag & drop to the Remote Host pane in PhpStorm. Good news: PhpStorm 6 comes with drag & drop as well as copy & paste support from the project pane to the remote host pane. (more…)