The State of Developer Ecosystem 2019: How the world of code is evolving
DevEcosystem infographic News news-company report survey
News

The State of Developer Ecosystem 2019: How the world of code is evolving

Update (August 13th): We’ve published the raw data. Get it!

The programming world is growing and evolving. New technologies and tools are constantly emerging, and while some are gaining support and popularity, others are used less and less.

We have set out to capture the current state of this ever-changing world. You will find representative answers and interesting facts about the current state of the ecosystem in our report and, maybe, learn something new. Our report covers a wide range of topics, with probing questions about programming languages (now including Rust), Databases, Team tools, DevOps, and fun facts about developers. 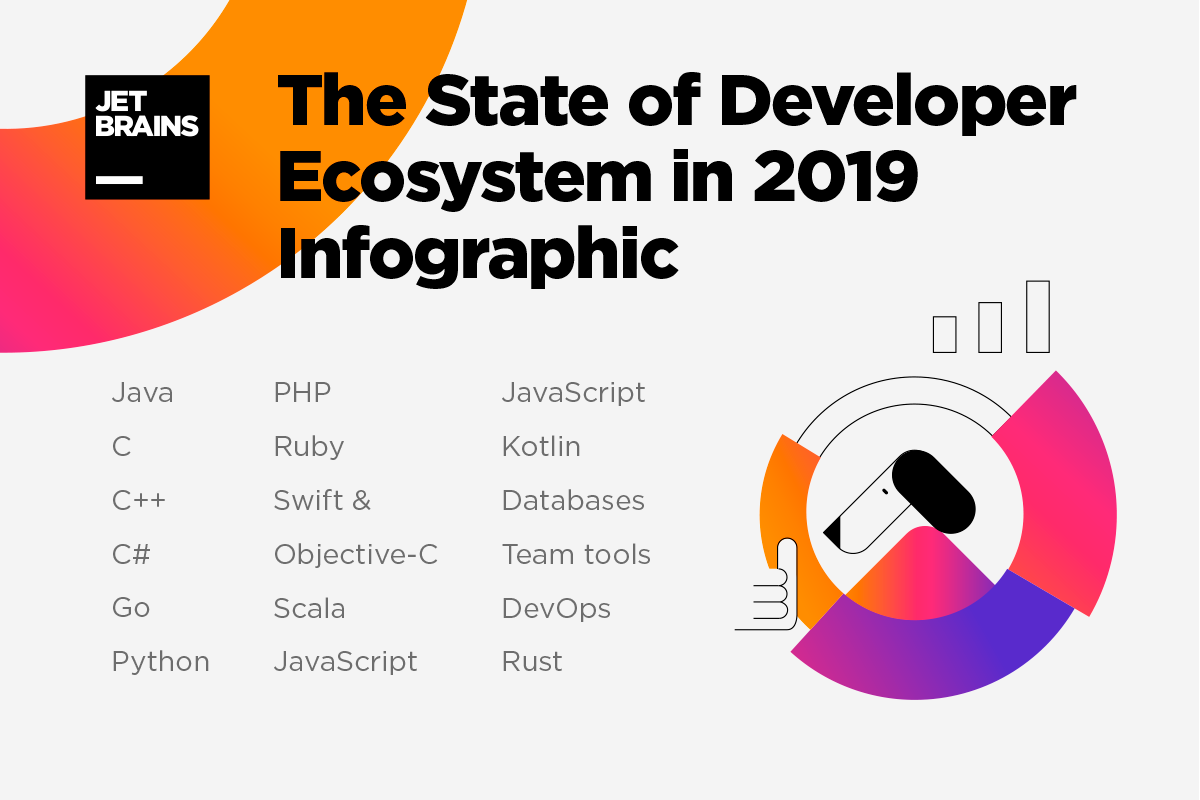 Here are a few facts from the report:

– Cloud services are getting more popular. The share of local and private servers dropped 8% and 3%, respectively, compared to 2018.

– Machine learning professionals have less fear that AI will replace developers one day.

– The more people code at work, the more likely they are to code in their dreams.

44% of JavaScript developers use TypeScript regularly. In total, a quarter of all developers are using it in 2019, compared to 17% last year.

– The use of containerized environments by PHP developers is growing steadily by 12% per year.

– 73% of Rust devs use a Unix / Linux development environment, though Linux is not a primary environment for most of them.

– Go Modules appeared just recently, but already 40% of Go developers use it and 17% want to migrate to it.

– 71% of Kotlin developers use Kotlin for work, mainly for new projects (96%), but more than a third are also migrating their existing projects to it.

– The popularity of Vue.js is growing year on year: it gained 11 percentage points since last year and has almost doubled its share since 2017.

– The most frequently used toolset for developers involved in infrastructure development is Docker + Terraform + Ansible.

More than 19,000 people participated in the Developer Ecosystem Survey 2019. We have prepared infographics based on the survey answers we received from external channels, which is almost 7,000 developers from 17 countries which are home to 80% of developers in the world. The survey had over 150 questions, only some of which are included in this report. We will share the complete results along with the anonymized raw data later, so stay tuned!

If you are interested in how the development world is evolving, you can compare the 2019 results with previous iterations of our survey from 2017 and 2018.

In the meantime, for more details on the data analysis process, make sure to check out the Methodology section.

We will continue to track the development trends and will run our Developer Ecosystem survey again in 2020. If you want to be a part of it, join our Survey Panel!