CLion development speeds up. We’ve just released CLion 1.1 with LLDB on OS X, C++ parser improvements and other tasty features and CLion 1.1.1 bug fix update, and today we are super excited to announce the launch of the CLion 1.2 Early Access Program! Sounds great, isn’t it? 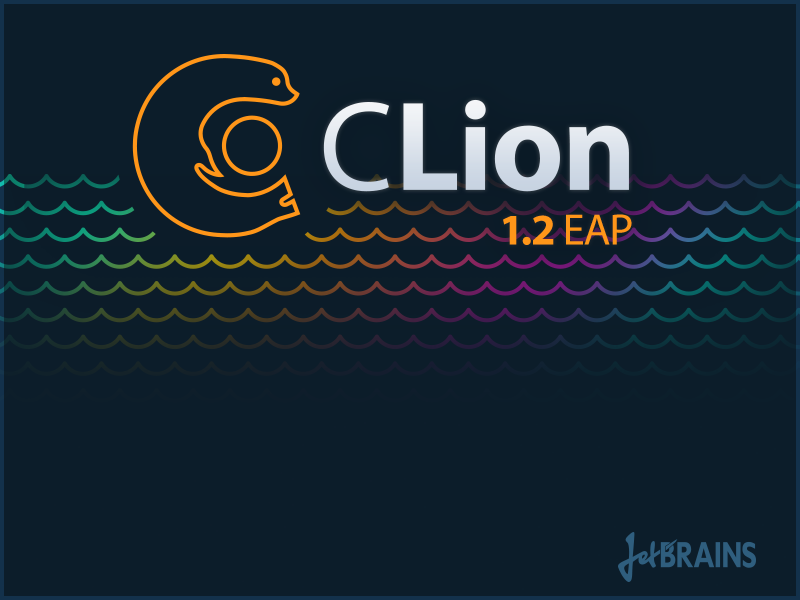 Despite the fact that work on the new CLion version has just started, a bunch of goodies is already available for you to take a look at.

Include CMake command allows you to load and run CMake code from the separate file or module. CLion 1.2 EAP now handles this command correctly, tracking changes in the respective modules and suggesting targets from the included CMake files while creating new C++ class/file: 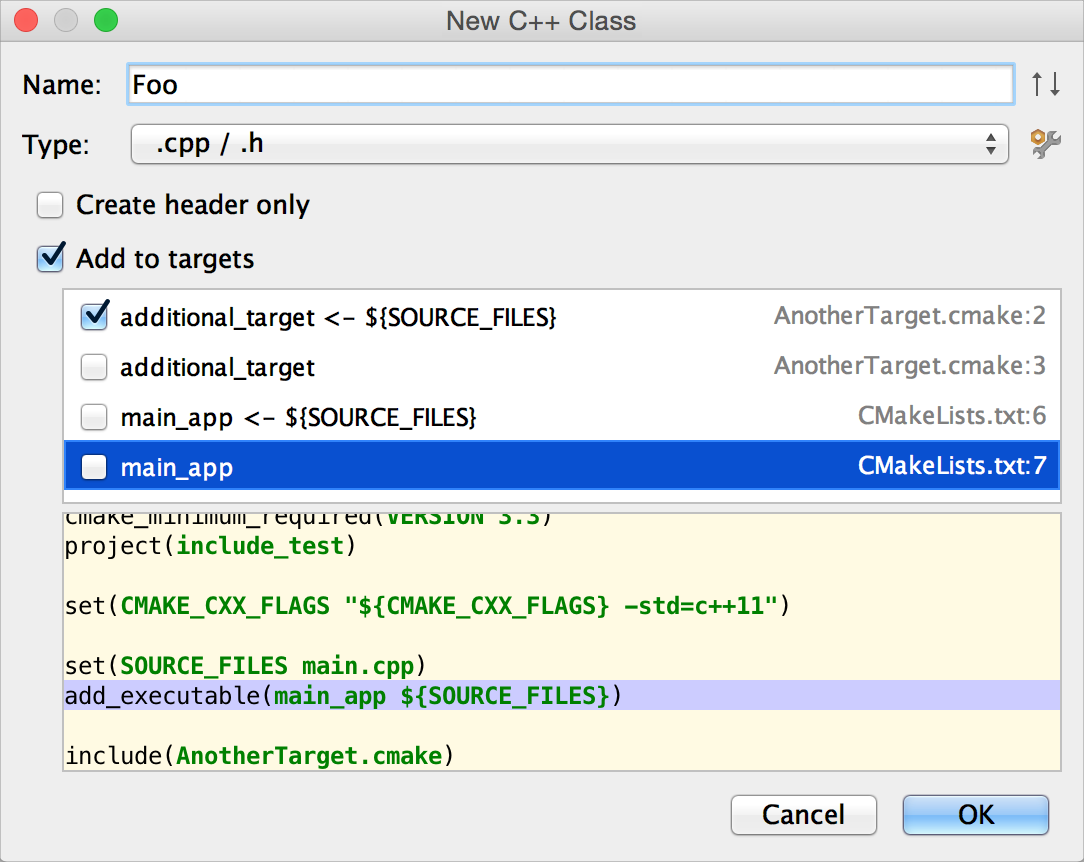 Another thing is CMake code style. In CLion 1.1 we’ve introduced initial code style options for CMake, while this EAP addresses many small improvements and fixes for these new settings. Check the options (Preferences/Settings | Editor | Code Style | CMake) if you still haven’t, and tell us what you think is missing or doesn’t work as you are expecting.

We spent some reasonable time working on better debugger performance. And among other things, lazy creation of GDB variables has a valuable impact on it. It solves also some problems with GDB hanging occasionally, as well as reduces performance and memory overhead.

This EAP also brings a fix for debugging the project with symlinked sources, when confusing tab with absolute path appears (CPP-3537).

Despite the fact that we released a big pack of parser changes with 1.1 version, we are still working hard on our C++ parser accuracy. Here are some of the issues addressed in this EAP:

There is a long list of Code Style settings for C/C++ and even CMake in CLion. And what about configuring options applicable to the selected piece of code only? Now you can do that! Select several lines and press Alt+Enter for a Quick Fix. You’ll see a new option there called Adjust code style settings. Try various options and see changes in live preview immediately. You can then apply or cancel if you don’t like the result. 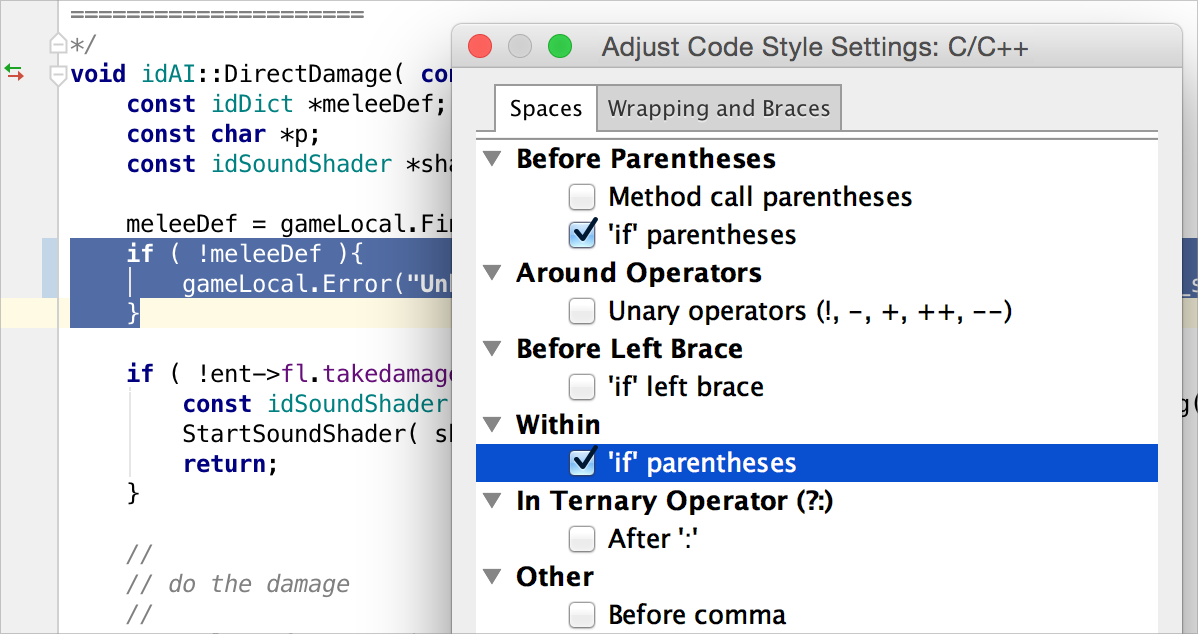 Find in Path is a powerful instrument for searching through the whole code base and now you can use it even more productively with a new preview pane, which allows you to check the first 100 results in a real time, not even leaving the dialog. 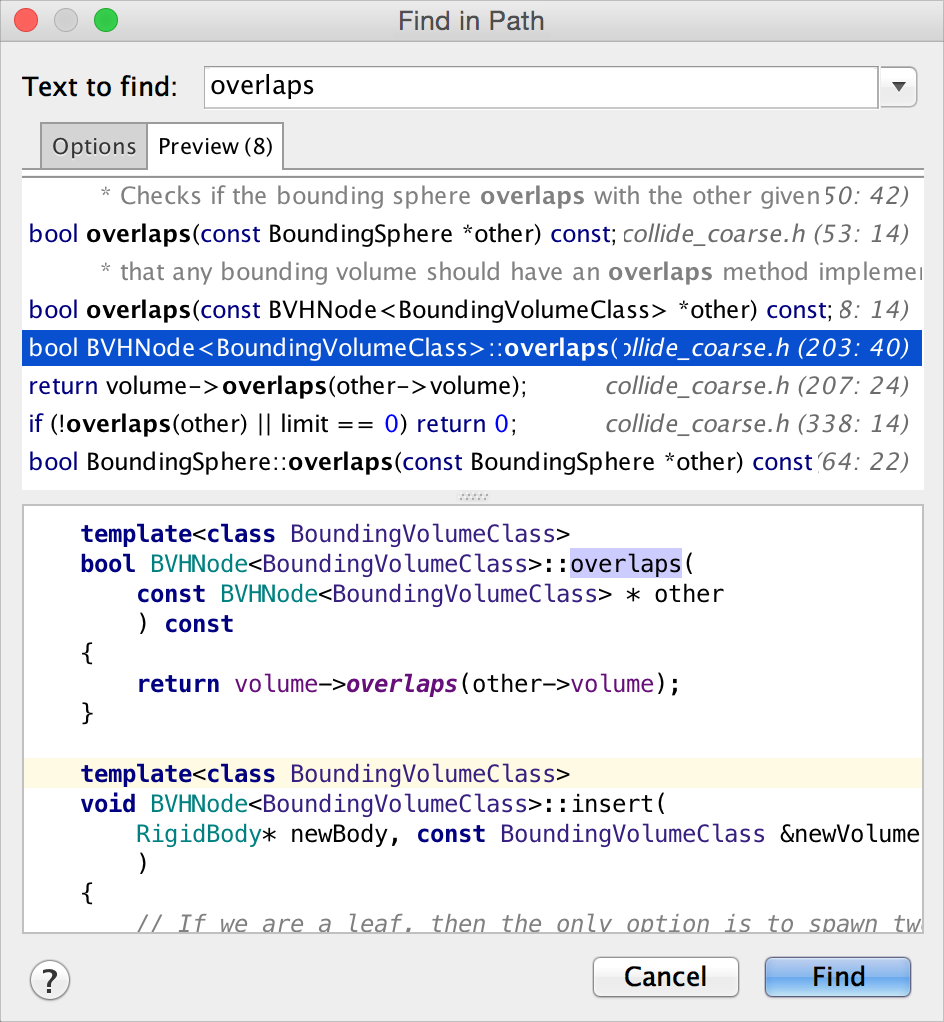 Current stable version on OS X is available in two options for now: usual one, that requires Java 1.6 installed on your mac, and one with the bundled custom JDK with fixes from the JetBrains team. With this EAP the things become easier. It’s one build for now, and the default option is bundled JDK selected for you. If you want something different, invoke Find Action (Shift+Ctrl+A on Windows/Linux, Shift+Cmd+A on OS X) and type Switch IDE boot JDK there, then select any prefered JDK installed in our system in the dialog.

We also continue our work on HiDPI support on Windows and Linux platforms and this EAP makes it more complete with fractional scaling of both fonts and icons according to your system DPI settings. Before this EAP you needed to enable this option by setting -Dhidpi=true key in the vmoptions file. Besides, CLion 1.1 implementation allows only a 2x scale factor. Now it’s way more easier! Use your favourite font and enjoy automatic HiDPI support in CLion.

Imagine you noticed a small issue in the code while looking at diff in diff viewer. And you really don’t want to go back to the editor for fixing it. Now you don’t have to! Unlock the editing mode in the diff viewer and edit just in place.

There is a long list of fixes and improvements, introduced in this build. Some other notable changes are:

This is it, however it’s just the beginning! Download CLion 1.2 EAP, give it a try and report issues to our tracker. Stay tuned and don’t miss further updates!

Yours as always,
The CLion Team

1.2 EAP
Agenda of Our Forthcoming Generative Art in C++ WebinarC++ team on the move! Meet us in the USA