Hello! We’re opening the Early Access Program for DataGrip 2017.2 so you can try new features before the next official release. In this cycle there are many that we really need your feedback on during the development process. See for yourself:

Database сloud services are growing more popular with every day. We were asked to add support for these two, especially Redshift, and here they are. 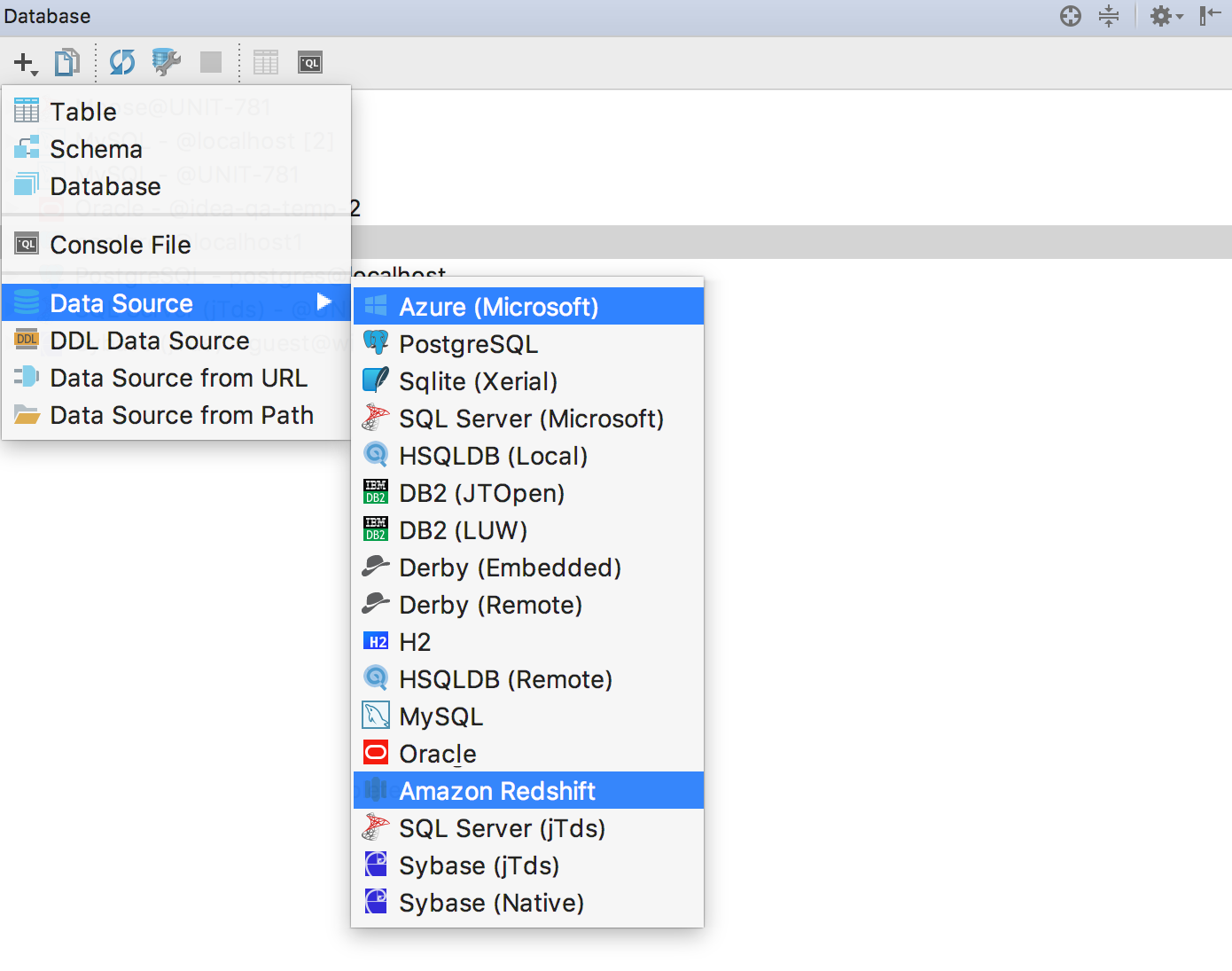 Microsoft Azure is nearly the same as SQL Server, so we just added a dedicated driver and UI for adding the data source.

But with Amazon Redshift, we started to support specific cases in SQL grammar which are different from PostgreSQL. For example, UNLOAD statement is not only highlighted correctly, but has an SQL-injection inside.

In general, this means that if some part of your Redshift code is highlighted as an error but in fact isn’t, we consider it as a bug. Please report such cases to our issue tracker.

If you’re already using Azure and Redshift via SQL Server and PostgreSQL drivers, please re-select the driver in the data source properties window: 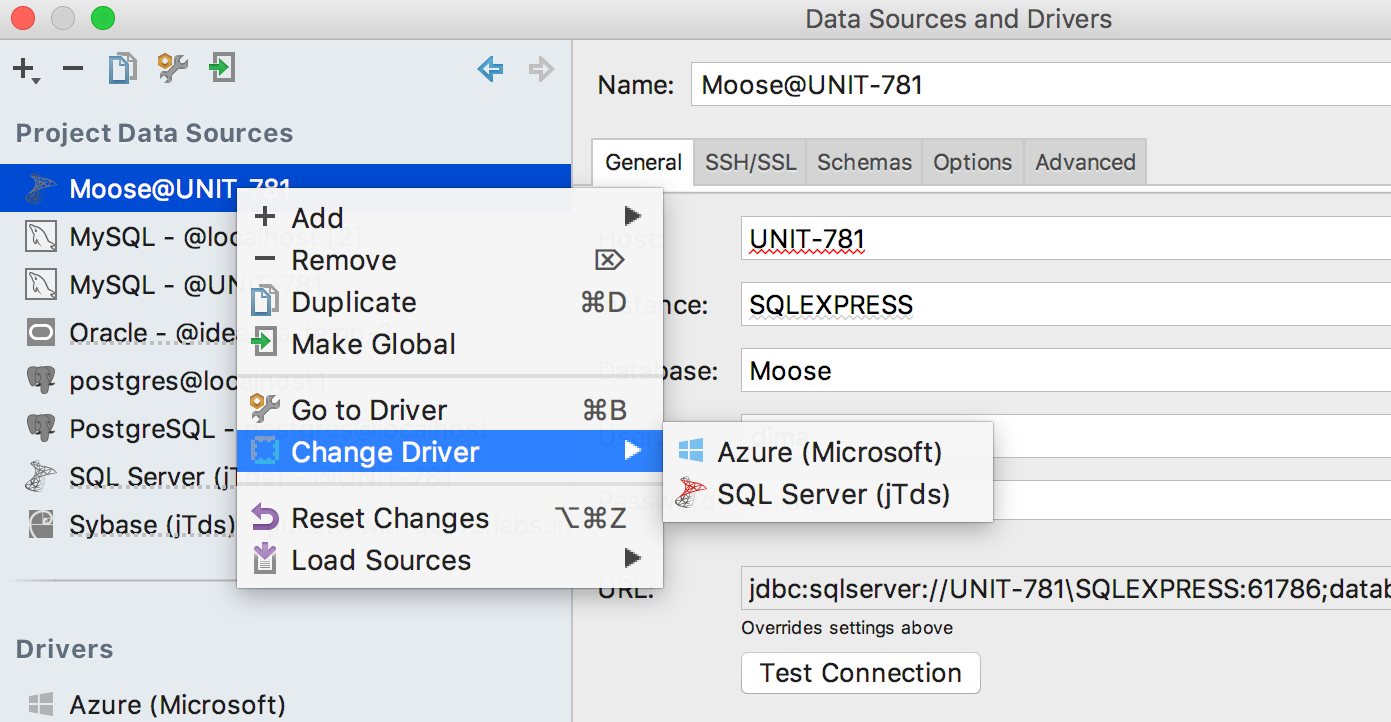 This was a really long-expected feature, but the wait is finally over. Thanks for bearing with us! We refactored a lot of code to implement this functionality, so some things can still be missing. Please give us feedback on your experience using data sources with multiple databases.

This will help you see data without writing a query to the console.

On other IntelliJ-based IDEs, Ctrl+Alt+F8 on an object gives you quick evaluation. In DataGrip, invoke it on a table in a query to see the data of that table.

Ctrl+Alt+F8 on a column name will show the values of that column in the expected result-set.

If you invoke the same quick evaluate on the keyword of a query (or subquery), the pop-up will show you the result. Note that Alt+Click also works for this.

Press Alt+F8 to open an Evaluate pop-up, where any query can be run. If invoked on a table, it will show the data. 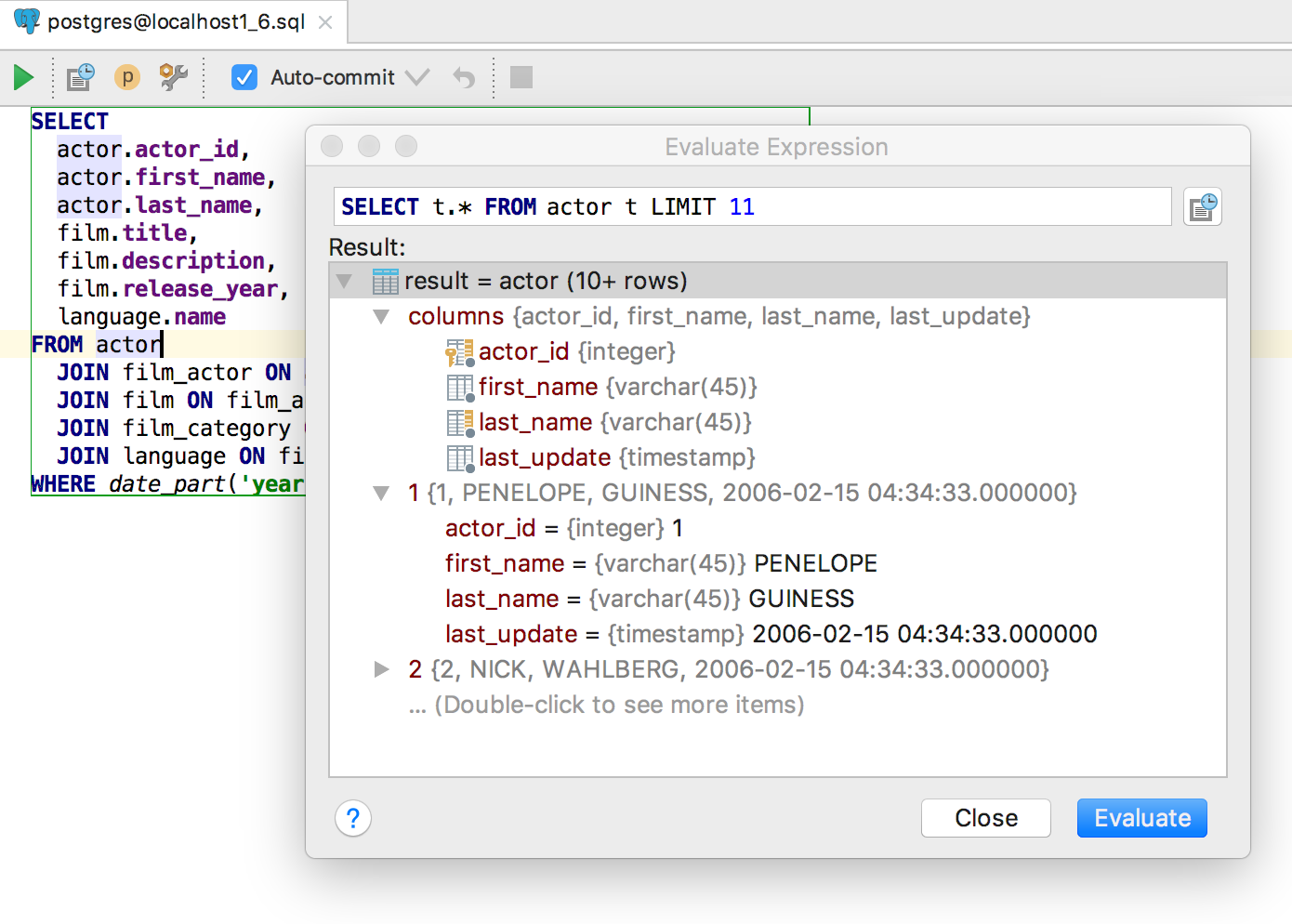 You can evaluate expressions here as well.

There is a new action for any file called Attach console. You can find via Ctrl+Shift+A or by opening the context menu for a file. After performing this action, this file can be run against the console. Switching consoles will be useful if you want to run the same script in several data sources. 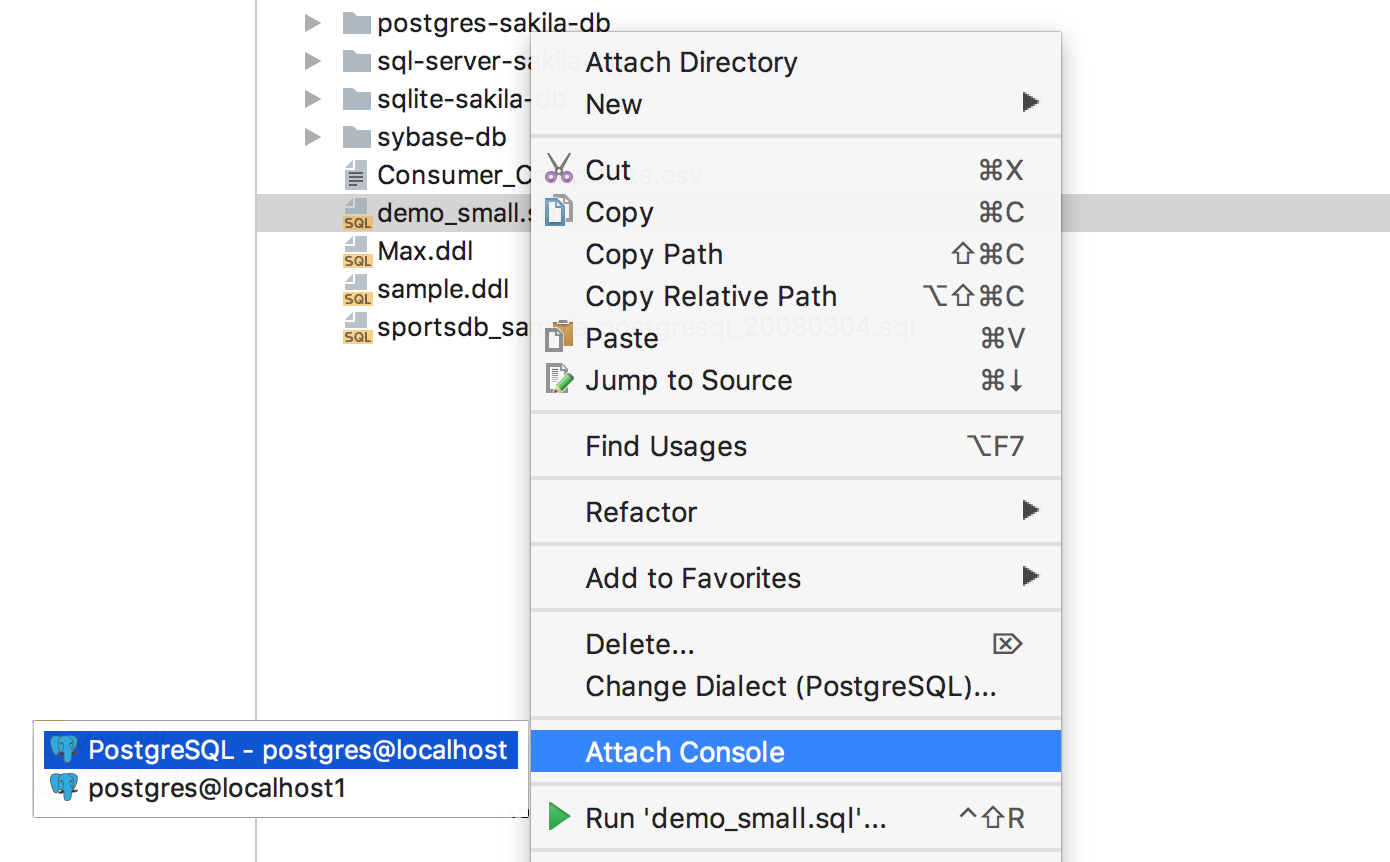 Many of you have asked for result-sets to be switched along with the corresponding consoles. Done!

Schema switcher works in MySQL even with a read-only connection. 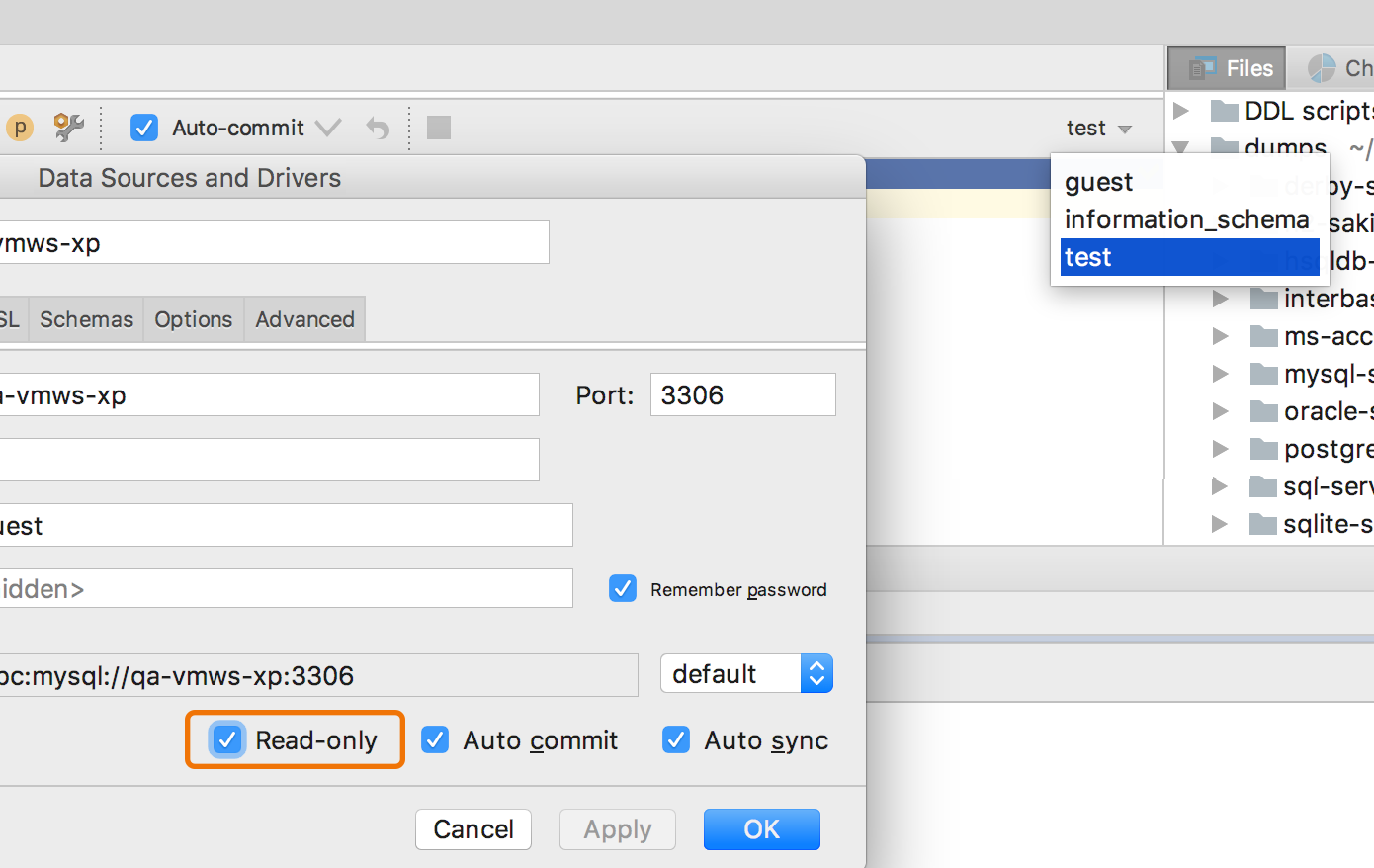 Objects are resolved by their OID values in PostgreSQL.

Sequences are resolved in scripts as well.

Your feedback is welcome in our twitter, forum, and the issue tracker. Let us know what you think about the upcoming DataGrip 2017.2!
Your DataGrip Team

Hi! All IntelliJ-based IDEs are nearing the 2018.3 release, and today we’ve got a DataGrip 2018.3 RC. Let’s have a look at what’s been added since the latest EAP. Previously, each new query console meant a new connection. In the new version, it’s possible to work with just one connection for the data source and have all consoles use that same one connection. This allows you to see the te

DataGrip 2018.3 EAP 4 The next build for DataGrip 2018.3 is here. There is a new setting: automatically add aliases when completing table names. But, if the aliases we generated don’t really suit you, create your own for particular tables. Here's the example: There are a lot of fixes around the Extract subquery as a CTE action. For those of you who don’t know about it: it’s place

DataGrip 2018.3 EAP 3 The next build for DataGrip 2018.3 is here. We continue polishing Cassandra support. In this release the Modify Table UI became clearer, and also we’ve fixed the bug with casing: now you can manage objects with capital letters in their names. Our team will highly appreciate it if you try out our EAP builds with Cassandra. What else is here? One of the most import

DataGrip 2018.3 EAP Hello! The next build for DataGrip 2018.3 is here. Let’s see what’s inside. Cassandra database We’re gradually finding our feet with NoSQL. After adding Clickhouse support in 2018.2.2, we have now gone on to add the support for Cassandra. Please, try it out and share your feedback with us! This time right now, before the release is set in stone, is the best time to