We are happy to announce that GoLand 2018.2 Beta is now available to try!
You can already try features that are coming in the next major version. Compared to the updates we’ve made available over the last two months via our EAP program, the Beta is relatively stable, though it may still have bugs and other issues. If you’ve been following our news, you’ve probably noticed we typically call this kind of update a ‘Public Preview’ – we’re no longer working on major changes but instead focusing on fixing bugs and polishing everything. Well, this Beta is exactly the same inside except we’ve applied the Rename refactoring :) 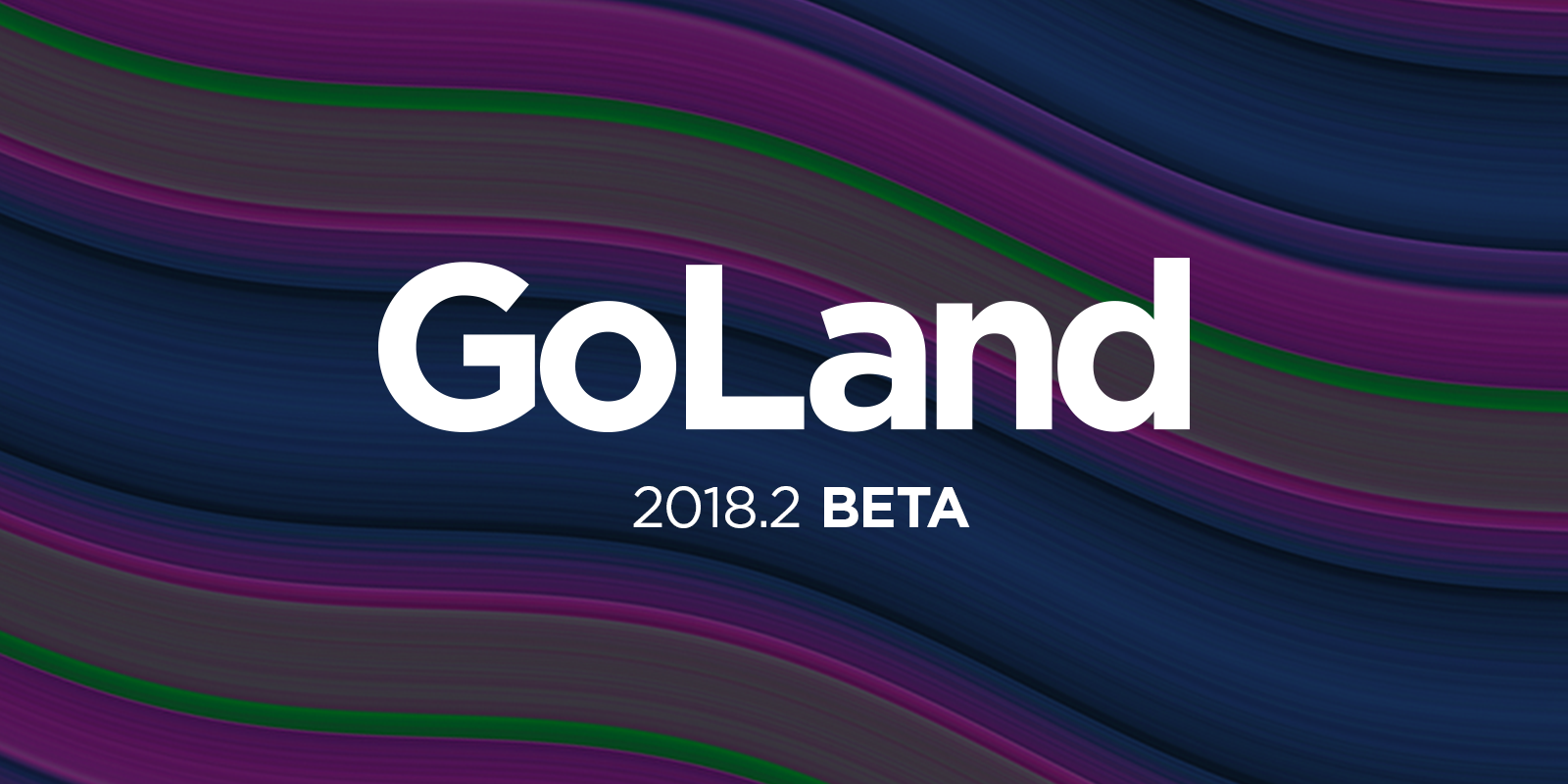 With naming issues cleared up, you are welcome to get this update working on your machine and try it out!

Let’s have a look closer at what this Beta has in store.

GoLand 2018.2 provides integration with Versioned Go Prototype out of the box and supports its latest version. Read this blog post for more details.
Note: Before using, please make sure vgo is upgraded to this or a newer version.

We’ve improved the Move refactoring in a couple of ways: 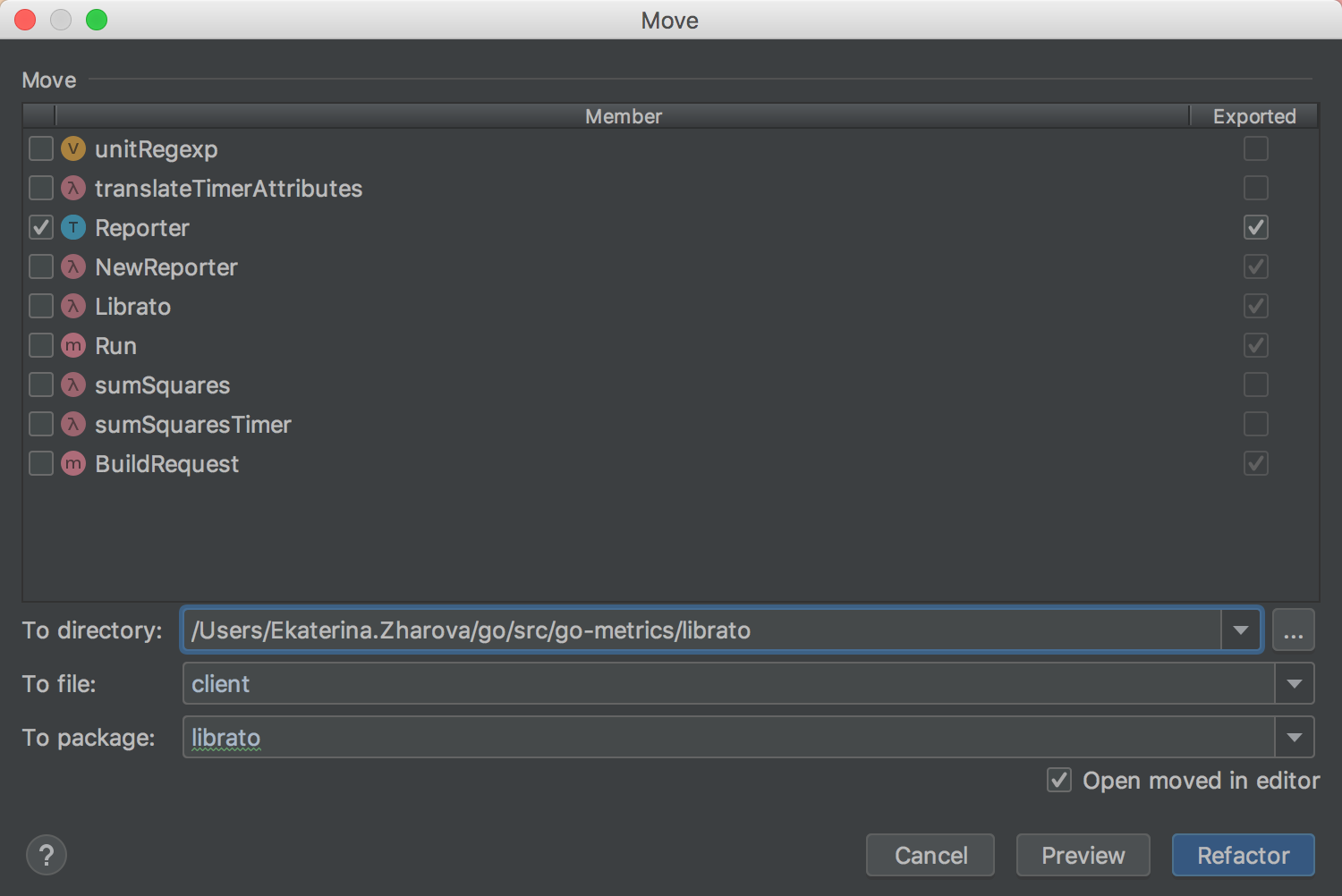 Besides, this update levels up Extract Variable to work with multi-value expressions.

Extract Method can now extract code into new methods on the type that the code belongs to.

A new quick-fix called Convert to expected type is available to convert a value to the desired type whenever the language permits.

Another noticeable addition, Implement missing methods, lets you quickly add missing methods if the expected type is an interface. For example, sometimes you may implement a method with a similar name but with a different set of parameters. In this case, the IDE will explain what needs to be changed to the method to make it compliant with the interface you are trying to implement. Knowing why an interface is not implemented by a type is not enough, so the IDE now allows you to also implement the interface straight from the place where the usage occurs.

Implement Methods is now able to not only add methods from an interface to a chosen type, but also create this type right away.

It is now quicker to use the dot import alias or to switch back to using the package name, by using one of two intentions as appropriate.

The family of Postfix Completion templates gets new members: .sort and .rr.

The .sort template transforms array or slice expressions and prepends them with an applicable sort method based on the element type. If the element type is a custom type, it will use the sort.Slice method.

The .rr template combines the power of two already available templates, .rre and .rrv, and сan be called on variables and expressions at the same time.

GoLand 2018.2 supports more scenarios where the completion engine suggests return values based on their type.

In addition, method names are now available in Smart Completion.

As you know, in Go language, comments are also used as annotations. In some libraries, spaces between comment markers and annotation instructions are not processed correctly.

In GoLand 2018.2, it is now possible to disable leading spaces for annotations that start with certain prefixes. If you go to Settings | Editor | Code Style | Go | Other, you will now see a custom exclusion list for the Add leading space to comment option. Use the Except for space to comments field to add any prefix name that you want to add as an exception.

Debugging in GoLand 2018.2 gets a set of improvements.

First off: non-suspending breakpoints. The debugger lets you set a breakpoint and log it in the console, or even get the stacktrace of the breakpoint when it was reached and then resume the execution. You can also do these actions when a breakpoint is hit and it stops.

Also, the debugger now supports lazy-loading for arrays, maps, and slices; supports deep nesting in maps; and offers a better presentation of key-value pairs in maps and slices.

In addition, this update comes with the latest version of Delve. It resolves a number of issues.

Goland 2018.2 comes with pre-built indices for the Go SDK 1.10. Now, when you set up the IDE for the first time and create your first new project, the IDE will finish the indexing much quicker for the Go distribution.

Sooner or later, everyone who works with Git faces merge conflicts. Sometimes this leads to difficulties which aren’t so easy to overcome. The upcoming GoLand 2018.2 will provide several updates to make this process pain-free.

A new Merge Conflicts node groups files with merge conflicts for each changelist, making it much easier to find them. The Resolve action link will open an improved Files Merged with Conflicts dialog. Now it displays the Git branch names when you perform a Pull, Merge, or Rebase, and allows you to group files by directory, which is especially useful when you have multiple files merged with conflicts.

The Log tab of the Version Control tool window gets a few nice improvements. Now you can:

In addition, in the new version you will find an option to skip the Push dialog completely when using the Commit and Push action. Alternatively, you can choose to only show this dialog when pushing to protected branches. Set this up in Settings | Version Control | Git.

Finally, the icing on the cake is support for multiple GitHub accounts. Now you can easily manage as many GitHub account as you need without switching between them. Just configure all accounts you use in the Settings | Version Control | GitHub, and set the default GitHub account for each of your projects. 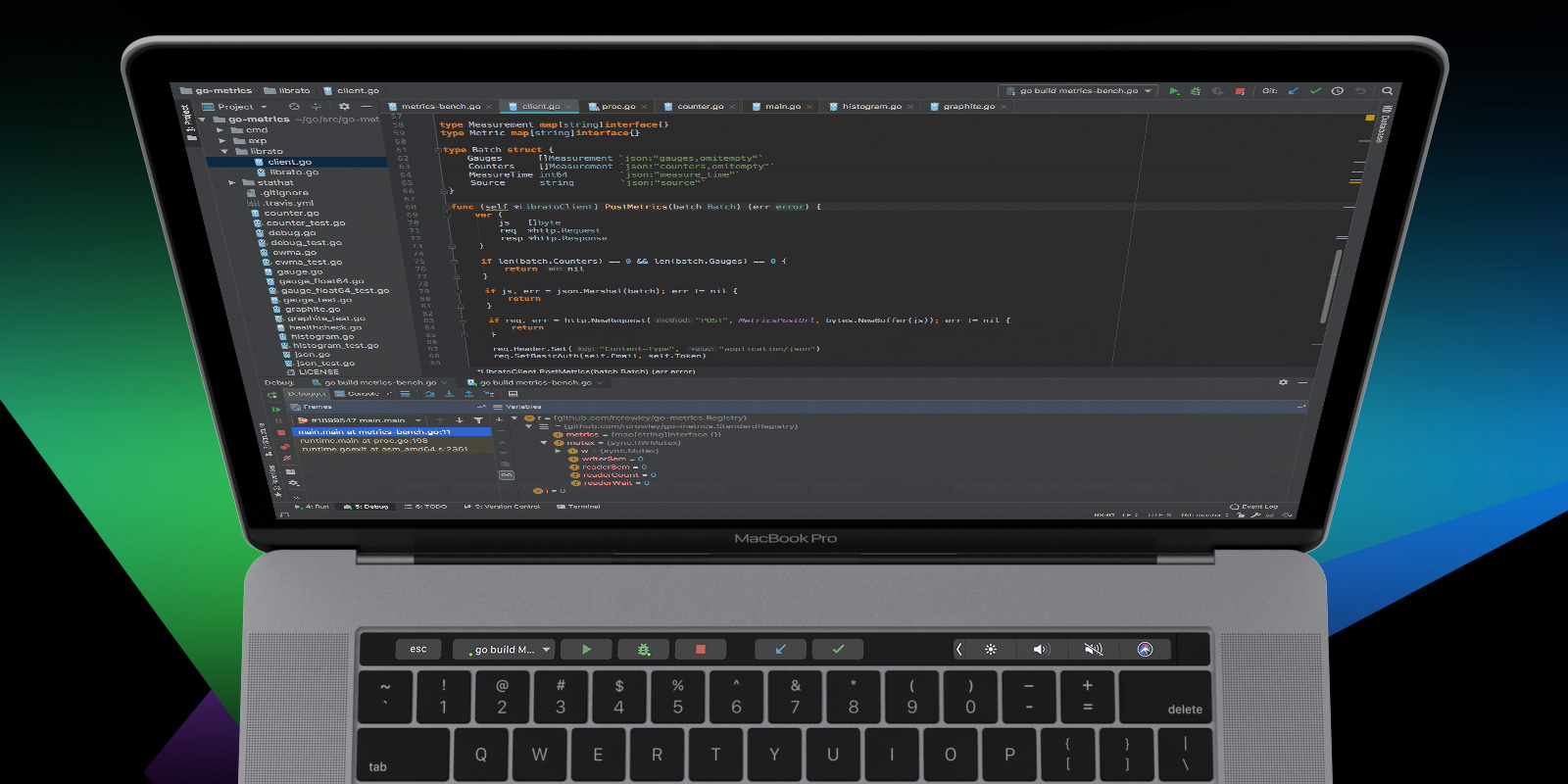 The GoLand buttons are displayed in the app-specific area in the middle of the Touch Bar interface. They are dependent on the context or which modifier keys you press.

All the available Touch Bar contexts can be customized on the Touch Bar page in Settings | Appearance & Behavior | Menus and Toolbars.

In a related change, we have implemented an ability to make the GoLand title bars darker. Go to Settings | Appearance & Behavior | Appearance and select Use dark window headers to try this out.

Last but not least, like other IDEs based on IntelliJ Platform, GoLand gets new icons. Read this blog from our UI Team for a look behind the scenes at how our icons and toolbars have changed their colors, shapes, and style, and what the team is planning for the future.

In this release cycle, File Watchers gets a simple, but very user-friendly feature which helps reduce setup redundancy for developers working with many projects.

Previously, it was possible to set a File Watcher only per project. Now you can configure the level of impact to choose between the Project and Global option. You can also limit the scope to enable/disable the state of each Global Watcher per project.

Thank to our colleagues on the WebStorm team, GoLand includes the following improvements for frontend-related technologies:

Grab your GoLand 2018.2 Beta from our website, update via Toolbox App, or install it beside your stable GoLand version.

Finally, we love hearing from you! Feel free to suggest a new feature or report a problem in whatever way works for you: this blog post, the issue tracker, or Twitter.

Compact Mode for the New UI, Better Performance With Windows Defender, and Docker and Kubernetes Updates in GoLand 2023.1 EAP #3

The second GoLand 2023.1 EAP build is now available!  You can get it via the Toolbox App, download it from our website, use a snap package (for Ubuntu), or from inside GoLand, select Check IDE updates for: Early Access Program in Settings | Appearance & Behavior | System Settings | Updates. Download GoLand 2023.1 EAP Run scratch files with non-standard-library packages You can now run scratch files with non-standard-library Go dependencies.  When you copy your code from a project file to a scratch file and press the Run button, GoLand

GoLand 2022.3 Beta is out! We’ve stopped adding new features and are now concentrating on fixing bugs and getting GoLand ready for the major release at the beginning of December. This is the last build in our EAP cycle that doesn’t require a license.  You can get the Beta build via the Toolbox App, download it from our website, use a snap package (for Ubuntu), or from inside GoLand, select Check IDE updates for Early Access Program in Preferences / Settings | Appearance & Behavior | System Settings | Updates. Download GoLand 2022.3 Beta Performance i