It’s not that we afraid to announce the final release. No. We just want to make it as good as possible. Hence, yet another candidate!

The Community edition RC2 startup issue has been fixed, and a new RC build is now available for download. The complete list of changes can be found in the release notes.

Also, we’ve spent some time on measuring the final effect of some of the performance improvements that we’ve implemented during IntelliJ IDEA 10 development. We’ve run several benchmarks against IntelliJ IDEA 9.0.4 to illustrate the improvements in different environments. Scenario was the following: we open IntelliJ IDEA Ultimate source code base and invoke File | Invalidate Caches action. After restart, IntelliJ IDEA re-indexes the whole project and we measure this re-indexing time.

FYI, IntelliJ IDEA Ultimate project is more than 50’000 Java files, thousands of XML, JSP and other files. The total project size is near 1Gb.

The chart says it all: 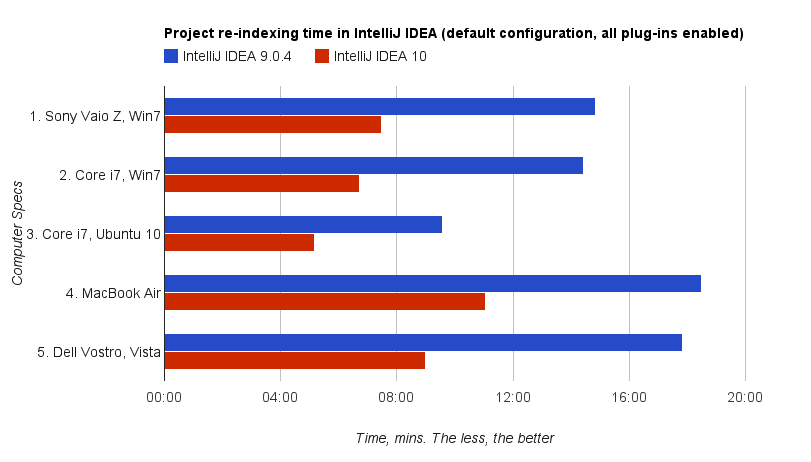 Full specs of the computers we used:

Develop with pleasure and speed!