The next version of Java is due out in September, and IntelliJ IDEA 2018.2 is ready for it.  The main code feature in Java 11 is Local-Variable Syntax for Lambda Parameters – Java 10 gave us the ability to use the var keyword for variables inside methods, now Java 11 lets us use this in lambda expressions:


At first glance, although this removes the type information from:

But one of the cases where we might want to use var instead of the full type is if we wanted to apply an annotation to the parameter.  Annotations require us to declare the full type:

With the ability to use var on parameters in a lambda expression, this can be shortened in Java 11 to:

IntelliJ IDEA supports this change as you’d expect, allowing the var keyword in the lambda. But IntelliJ IDEA 2018.2 also helps migrate the code to this updated syntax.  If, for example, you were using annotations in a lambda expression, the inspection for removing the “redundant parameter types” will replace the types with var. 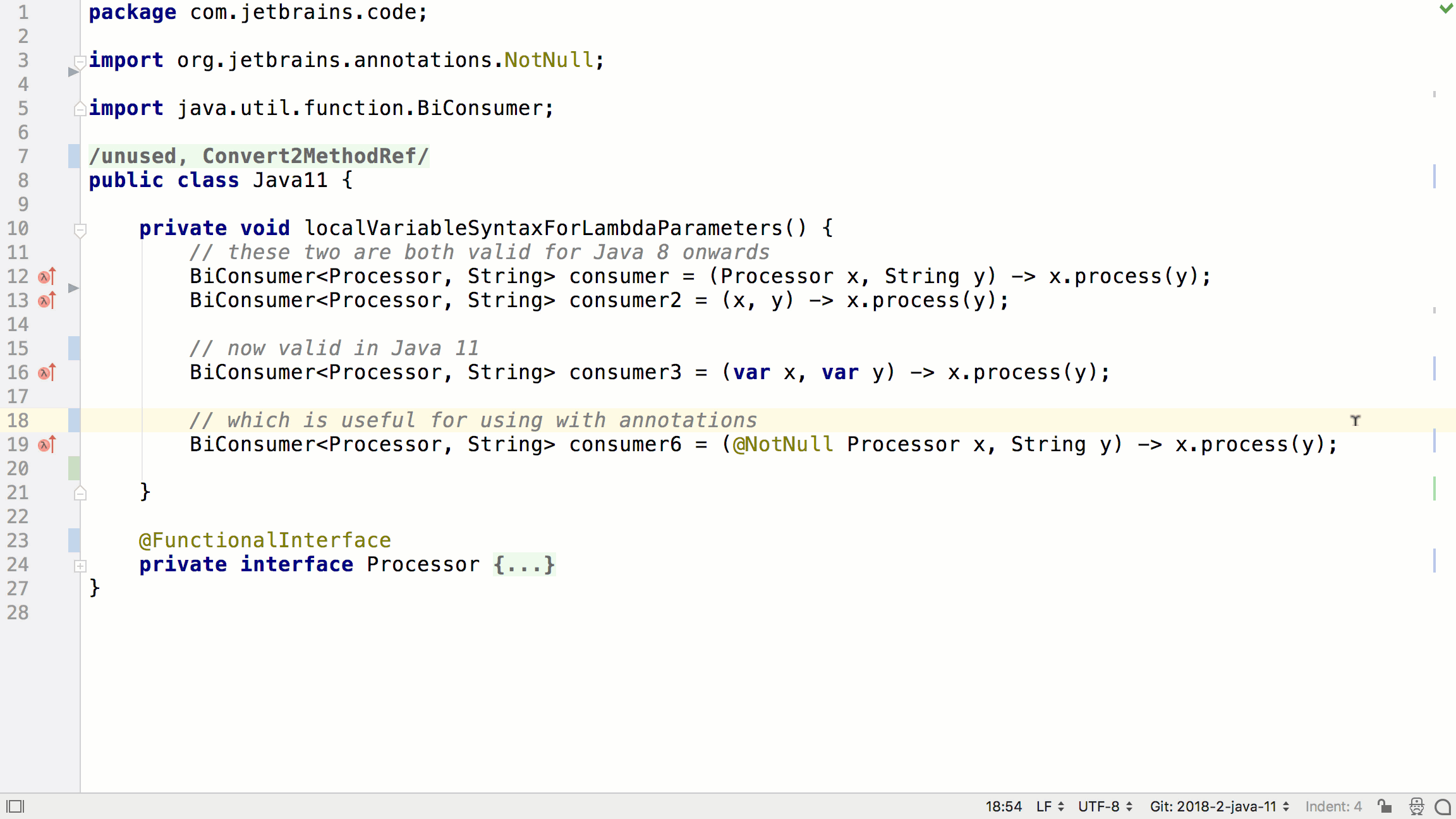 Along with updates for the use of var in Java 11, IntelliJ IDEA 2018.2 also has some improvements for working with var. Holding down Ctrl/⌘ and hovering over the var keyword will show the type of the variable:

It’s important to remember when working with this new syntax that all relevant type information needs to be on the right of the equals sign since the left side no longer declares the type. There are two inspections that have been updated to reflect this.

Firstly, IntelliJ IDEA 2018.2 understands that while sometimes an initializer is not required for a variable with an explicit type, variables created with var will use an initial value to determine the type.  Therefore any “redundant initializer” warning that applies to explicit type variables is not shown for var: 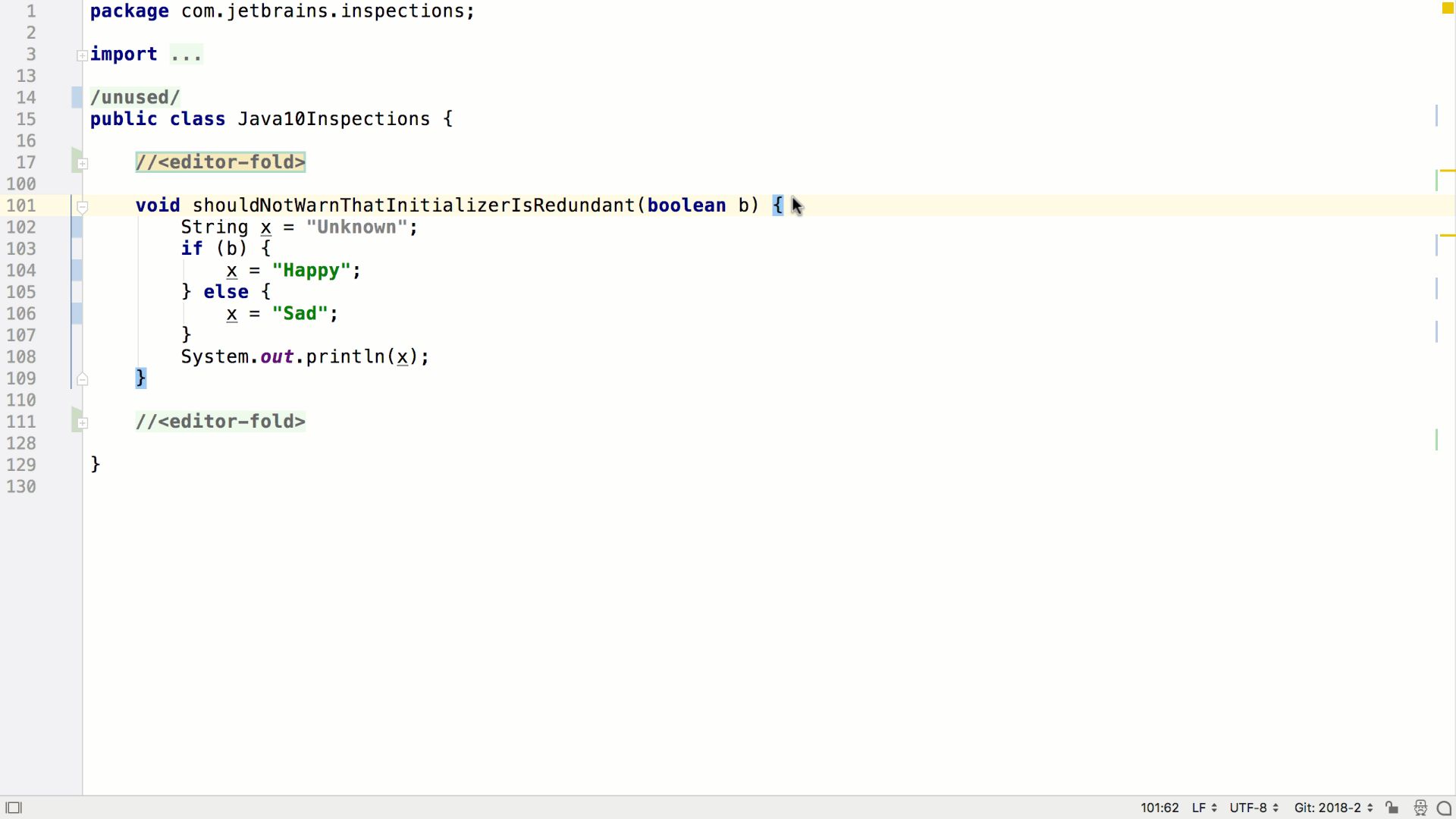 Similarly, the removal of an array type is not suggested for var since it’s required:

In summary, IntelliJ IDEA 2018.2 is not only able to help when using Java 10 features, it’s ready to help us start coding with Java 11 before it’s even released!

We’ve released a new bug-fix update for IntelliJ IDEA 2020.2. Let’s see what IntelliJ IDEA 2020.2.2 brings! You can update to the new version from inside the IDE, with the Toolbox App, or using snaps if you are an Ubuntu user. It is also available for download from our website. Check out the full list of changes in the release notes. If you have any suggestions for making IntelliJ IDEA better, please post them to our issue tracker or comment on this article. Happy developing!
Posted on September 15, 2020 by Irina Maryasova

Even with the latest release still fresh in our minds, we are already back again with an improved version of IntelliJ IDEA. This bug-fix update fine tunes the major 2020.2 release, helping you stay even more focused and productive. As usual, you can update to the new version from inside the IDE, with the Toolbox App, or using snaps if you are an Ubuntu user. It is also available for download from our website. The most significant fixes are: You can always find a full list of changes in the release notes. If you have any suggestions about how we can improve IntelliJ IDEA, please
Posted on August 25, 2020 by Irina Maryasova
Subscribe