In this article, I will cover all the new and updated language features in Java 15, why you need them, and I’ll show you how to use them in IntelliJ IDEA. Let’s get started. 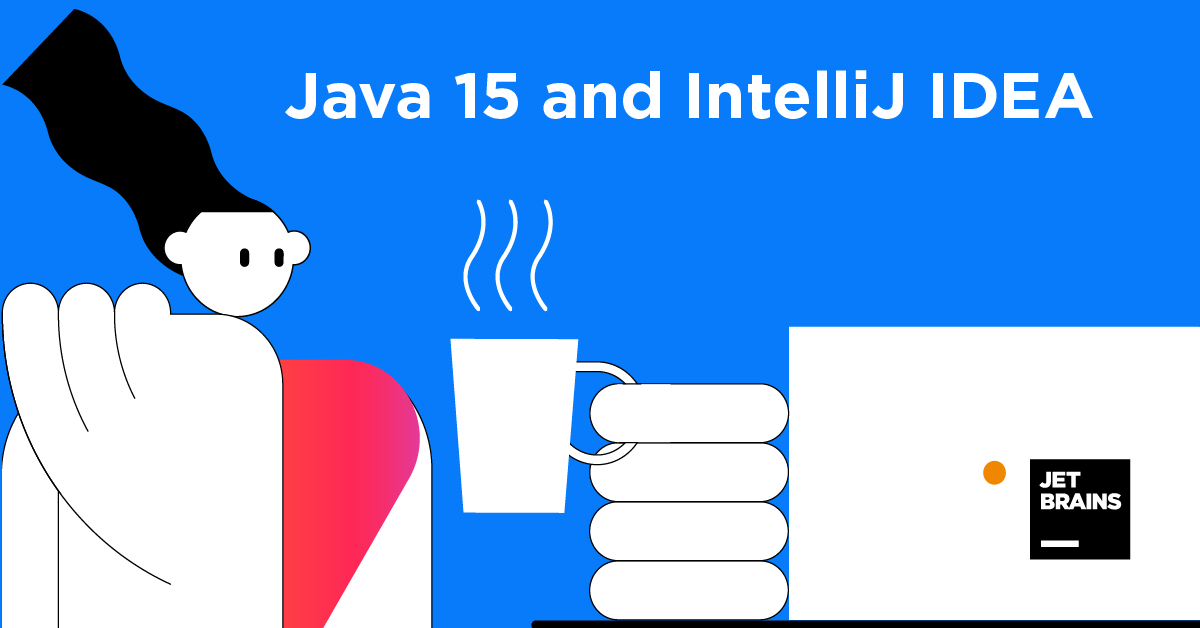 Imagine you are creating an application that helps its users with gardening activities. Depending on the type of plant, a gardener might need to do different activities. Let’s model the plant hierarchy as follows (I’m not detailing the classes on purpose):


The following is an example of how the Gardener class might use this hierarchy:

The problem code is the assumption that a developer has to deal with in the else part. Though unreachable now, what happens if another developer adds a class to this hierarchy? Sealed classes can impose this restriction on the hierarchies at the language level.

With the modifier sealed, you can declare a class as a sealed class. A sealed class uses the reserved keyword permits to list the classes that can extend it directly. The subclasses can either be final, non-sealed, or sealed. 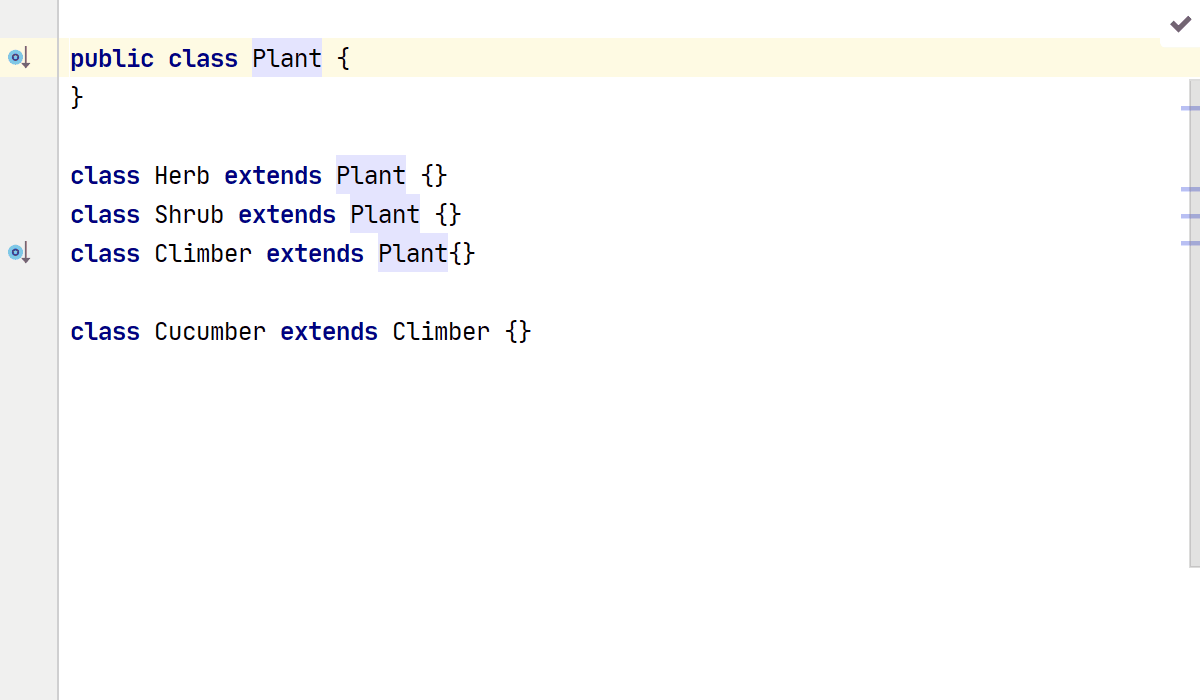 Here’s the modified code for reference:


By allowing a predefined set of classes to extend your class, you can decouple accessibility from extensibility. You can make your sealed class accessible to other packages and modules, but you can still control who can extend it. In the past, to prevent classes from being extended, developers created package-private classes. However, this also meant that these classes had limited accessibility. This is no longer the case if you use sealed classes.

You can get the permitted subclasses via reflection using the Class.permittedSubclasses() method. This makes it possible to enumerate the complete sealed hierarchy at runtime, which can be useful.

Let’s quickly check the configuration of IntelliJ IDEA on your system to ensure you can get the code running it.

Java 15 features are supported in IntelliJ IDEA 2020.2, which was released in July 2020. You can configure it to use Java 15 by selecting the Project SDK as 15 and choosing the ‘Project language level’ as ‘15 (Preview) – Sealed types, records, patterns, local enums and interfaces’ for your Project and Modules settings. 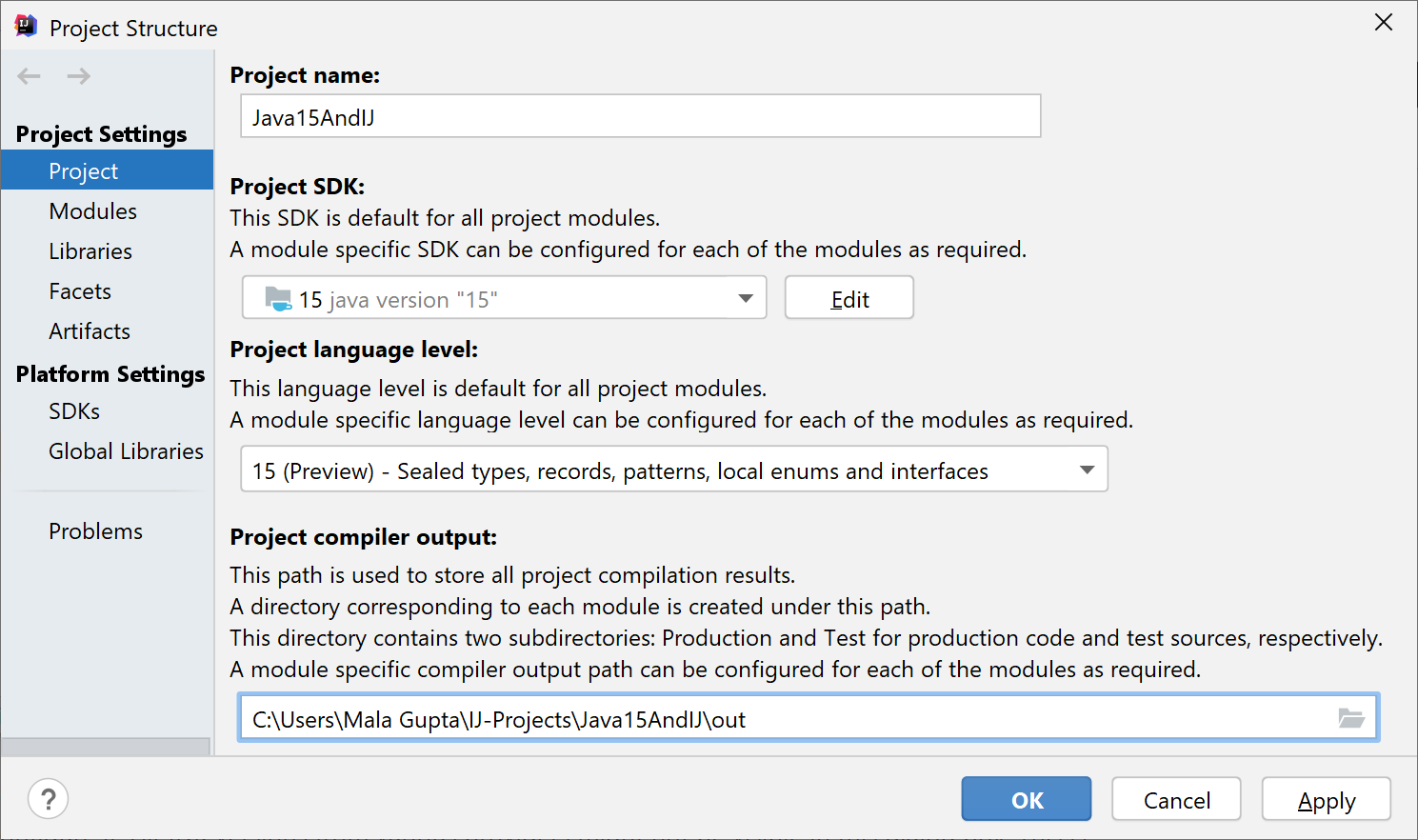 Java 15 will be GA (General Availability) on September 15, 2020, after which you will also be able to download it directly from IntelliJ IDEA. To do so, click on SDKs, under ‘Platform Settings’, then click the ‘+’ sign at the top, choose ‘Download JDK’, then select the Vendor and the version and the directory to download the JDK to.

After creating a sealed hierarchy, you will be able to process an instance from the hierarchy in a precise manner and won’t need to deal with any ‘general’ implementations. The process method in class Gardner will work with no chance of running the else clause. However, the syntax of the if–else construct will still need you to define the else part (this may change in a future Java version).

Type-test-patterns, introduced with Pattern Matching for instanceof in Java 14, might be added to the switch expressions in future Java versions. With the enhanced switch expressions, you are able to work with the exhaustive list of extended types. This lets you eliminate the definition of any ‘general code’ to execute for an unmatched Plant type passed to the method processInAFutureJavaVersion:

Sealed classes and their implementations can’t span across multiple modules. If a sealed base class is defined in a named module, all its implementations must be defined in the same module. However, they can appear in different packages.

For a sealed class defined in an unnamed module, all its implementations must be defined in the same package.

Rules for base and extended classes

A sealed class can be abstract too. The extended classes could be defined as abstract or concrete classes. 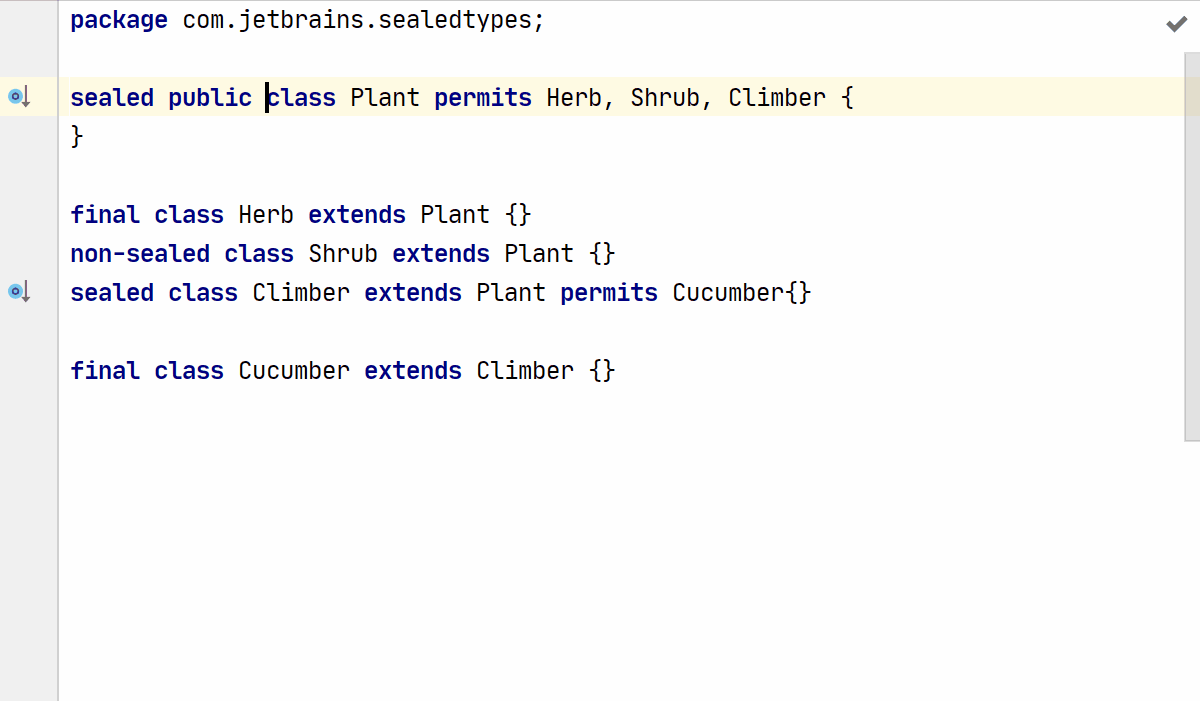 Here’s the modified code for reference:

A sealed interface allows you to explicitly specify the interfaces that can extend it and the classes (including records) that can implement it. It follows rules similar to sealed classes.

However, since you can’t declare an interface using modifier final – because doing so would clash with its purpose, as interfaces are meant to be implemented – an inheriting interface can be declared using either sealed or non-sealed modifiers. The permits clause of an interface declaration lists the classes that can directly implement a sealed interface and interfaces that can extend it. An implementing class can be either final, sealed or non-sealed. Since records, introduced in Java 14, are implicitly final, they don’t need any additional modifiers: 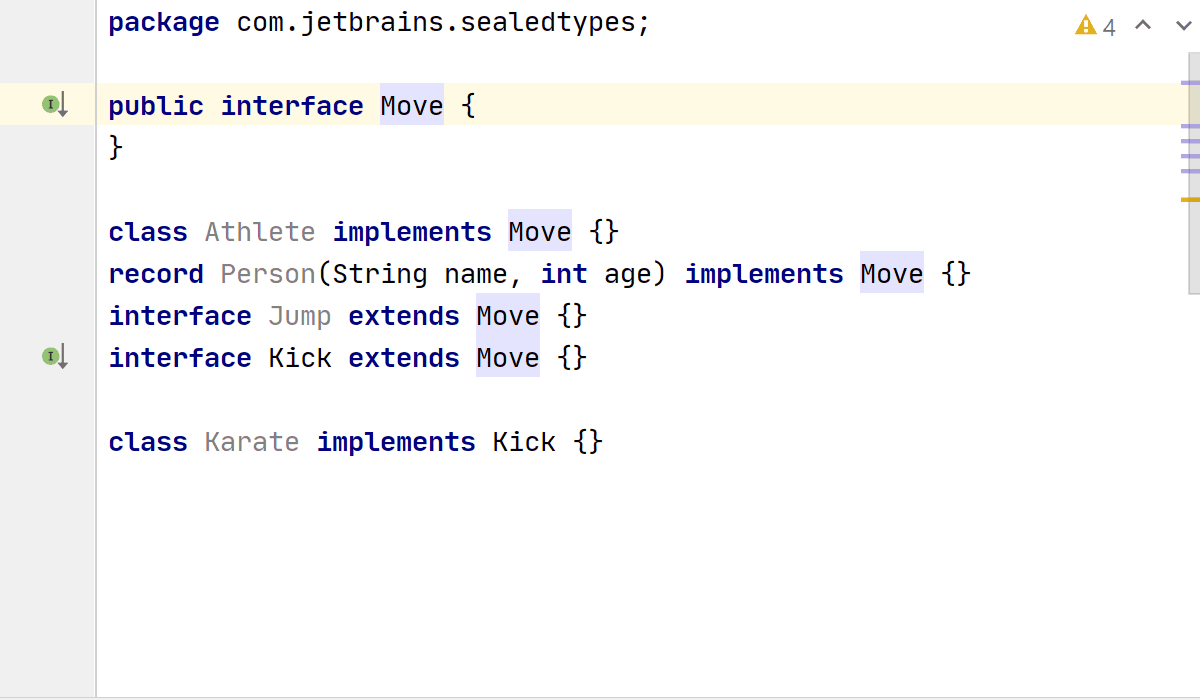 Here’s the code for reference:


Let’s move on to the next enhancement in Java 15 – the introduction of local records.

A new type of class, Records introduced a compact form to model value objects. A preview language feature in Java 14, Records is in its second preview in Java 15, with a few changes.

If you are new to Records, or if you want to find out how Records are supported in IntelliJ IDEA, please refer to my Java 14 and IntelliJ IDEA blog post. IntelliJ IDEA has a lot of features to help you create and use Records and this blog post explains it using hands-on examples.

In this blog post, I’ll cover the changes to Records from Java 14 to Java 15.

Java 15 allows you to define local records to model a domain object, while you are processing values in a method. In the following example, the method getTopPerformingStocks finds and returns the names of Stocks that have the highest value on a specified date.

Java 15 allows declaration of local enums and interfaces too – for the same reason. You can encapsulate your data or business logic, which is local to a method, within the method.


However, they cannot capture any context variable. For example, for the local enum Data, the enum constants FOO and BAR can’t be created by using the method parameter input in the method test():

Many Java developers use the instanceof operator to check whether a given reference variable is of a certain type. They compare a reference variable to a type by using the instanceof operator. If the result is true, the next obvious step is to explicitly cast it to the type they compared it with to access its members. These steps have an obvious repetition here, like compare-ifResultTrue-castToType.

Pattern Matching for instanceof is in its second preview in Java 15 (without any changes from Java 14).

Please refer to my Java 14 and IntelliJ IDEA blog post, to find out how IntelliJ IDEA supports this new feature by adding new intentions. This blog post also has some excellent examples of how to refactor your code using this feature and other inspections from IntelliJ IDEA, like merging nested if and extracting or inlining variables.

Multiline Strings, Text Blocks have been added as a standard language feature in Java 15 (without any changes from Java 14).

Please refer to my Java 14 and IntelliJ IDEA blog post, to find out how IntelliJ IDEA supports Text Blocks and you can use it in your applications.

Because of how these features work, IntelliJ IDEA is committed to only supporting preview features for the current JDK. Preview language features can change across Java versions, until they are dropped or added as a standard language feature. Code that uses a preview language feature from an older release of the Java SE Platform might not compile or run on a newer release. For example, Switch Expressions in Java 12 were released with the usage of break to return a value from a Switch Expression’s branch, which was later changed to yield. Support for using break to return a value from Switch Expressions has already been dropped in IntelliJ IDEA.

IntelliJ IDEA is not only committed to supporting new Java features, but also to ensuring that our existing intentions and inspections work with them.

IntelliJ IDEA 2020.2 already supports all the new language features from Java 15. Try out Sealed classes and interfaces, Records, Pattern Matching for instanceof, and Text Blocks today. You can download it using this link.

We love to hear from our users. Don’t forget to submit your feedback regarding the support for these features in IntelliJ IDEA.