You can read this blog post in other languages:

Today we are releasing Kotlin 1.3 together with a set of accompanying libraries, build tools, and learning materials!

We develop Kotlin to be a good tool for all application developers, at all scales and on all platforms. In Kotlin 1.3 coroutines graduated to stable, making non-blocking code easy to read and write. Scalability has never been as approachable before! This release also brings Kotlin/Native Beta that compiles Kotlin code directly to native binaries. The multiplatform capabilities of Kotlin now cover all supported platforms so one can share business logic between such components as Android and iOS apps. Servers can share logic with web and mobile clients too, and multiplatform libraries make everyday tasks easily portable. 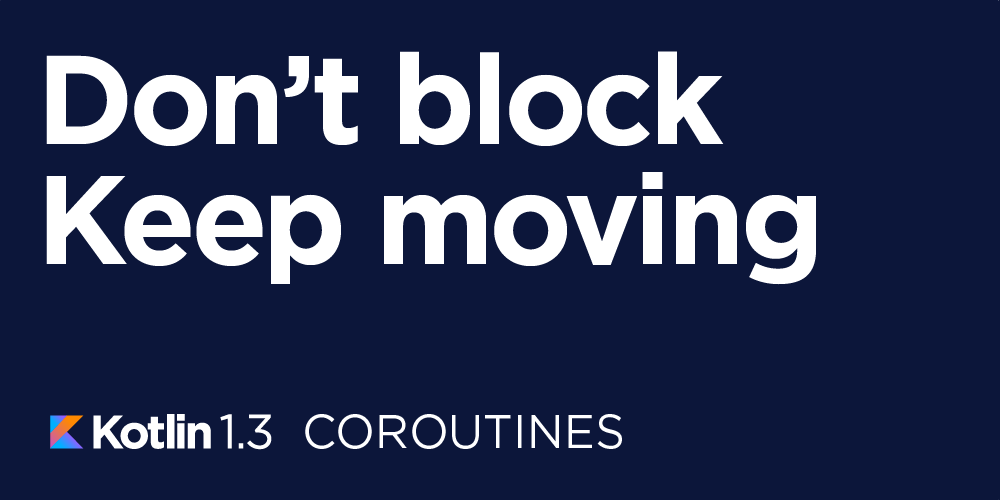 Kotlin has seen an unprecedented growth in adoption this year. Since January 2018, about 1.5 million users wrote Kotlin code, and this number has more than doubled since last year. The trends on StackOverflow and in our public Slack are also very encouraging. We are grateful to the Kotlin community for being supportive and welcoming!

We are happy to see the ecosystem around Kotlin grow and mature. Kotlin is friends with Google Cloud Platform, the Spring Framework and Gradle, not to mention the first-class support on Android. The open source community is creating excellent libraries such as RxKotlin, mockito-kotlin, TornadoFX, Kodein, and ΛRROW. And projects like Square’s Okio and LibreOffice are migrating to Kotlin or planning to do so. Everyone is welcome to join the Kotlin ecosystem with their great ideas and projects!

Many people outside JetBrains contributed to Kotlin 1.3 with pull requests, bug reports and all kinds of feedback. We appreciate your help a lot and are really happy to move Kotlin forward together!

Coroutines are a modern way to write non-blocking asynchronous code that’s easy to understand and evolve. It’s a powerful tool for anything from offloading work onto background workers to implementing complicated network protocols. The kotlinx.coroutines library hits 1.0 release and provides a solid foundation for managing asynchronous jobs at any scale including composition, cancelation, exception handling and UI-specific use cases.

Get started today at kotl.in/coroutines!
Subscribe to a Coroutines Webinar here

Kotlin/Native uses LLVM to compile Kotlin sources to standalone binaries (no VM required!) for various operating systems and CPU architectures including iOS, Linux, Windows, Mac and even WebAssembly and embedded systems like STM32. It features fully automatic memory management, can interoperate with C, Objective-C (and Swift), and exposes platform APIs such as Core Foundation, POSIX, and any native library you fancy!

The Kotlin/Native runtime promotes immutable data and prohibits any attempts of sharing unprotected mutable state between threads. In fact, threads don’t exist for Kotlin/Native, they are abstracted away as a low-level implementation detail and replaced by workers — a safe and manageable way of doing concurrency.

Discover Kotlin/Native at kotl.in/native.
Subscribe to a webinar here

Working on all platforms is an explicit goal for Kotlin, but we see it as a premise to a much more important goal: sharing code between platforms. With support for JVM, Android, JavaScript, and Native, Kotlin can handle any and all components of a modern application. And this brings the invaluable benefit of reuse for code and expertise, saving the effort for tasks more challenging than implementing everything twice or multiple times. While multiplatform capabilities in Kotlin are still experimental, 1.3 makes a big step forward.

Tooling for Kotlin/Native and Multiplatform

Ktor, our connected applications framework that implements the entire HTTP stack fully asynchronously using coroutines, has reached Beta and is available at ktor.io.

In addition to everything covered so far, this release comes with many other features and improvements, including:

See full description in our What’s New page. The changelog is available here. The compatibility guide is here.

We’ve just published all the videos from KotlinConf 2018 covering the hottest topics of the 1.3 release. Check out the opening keynote and session recordings to deep dive on what’s new and noteworthy:

We do our best to make learning Kotlin easy and fun. Out of the numerous resources available, we’d like to highlight these:

The Kotlin 1.3 webinars will be a great starting point for everyone.