The LWC event, which this year is organized as a workshop at the SPLASH conference, is getting closer. We’re happy to inform you that MPS will be represented by a team of four brave MPS enthusiasts, who will compete against the other workbenches with an MPS-based system.

Correction: As indicated in the comments, LWC stands for Language Workbench Challenge, not competition. Sorry for the mistake.

Their solution leverages the mbeddr documentation language to take care of the presentation side of the system and relies heavily on the core MPS capabilities to solve the project challenges:

Let’s introduce the individual members of the crew:

Two brothers, who have both followed the same career path, earning an MSc degree in computer science and a PDEng postmaster degree in Software Technology, employing Model Driven Engineering for years in their professional jobs, and using MPS since 2012. They significantly contributed to MPS solutions for the last three Language Workbench Competition workshops.

They both contribute to MPS plugins at DSLFoundry (check out also the github page).

Federico is a DSL enthusiast doing consulting on MPS. He got a PhD in Polyglot Software Development and worked in Italy, Germany, Ireland and France, for companies like TripAdvisor and Groupon. He is now focusing on building tools and languages to empower people. You can find out more on Federico’s website.

Ana a PhD student at the Eindhoven University of Technology. She has a keen interest in software engineering, and, in particular, in technologies for domain-specific languages.  Check out Ana’s publication page.

What these guys think about MPS

Ana says: It was surprising how quickly people in the team came up with examples to address the challenges of the LWC this year. This says a lot about the power of MPS.

Klemens and Eugen say: we like to apply MPS and mbeddr to real-life projects in our work. The notational flexibility that MPS gives, enables us to encode various (often company-specific) domains, which opens up these domains not only to software-developers, but to developers from different disciplines. Being forced by MPS to explicitly specify each of the aspects that make up a language, shapes your way of reasoning about languages, the usefulness of which extends even outside MPS.

The team would also like to thank mbeddr team, in particular to Markus Völter and Kolja Dummann, for their input in designing building the solution. Moreover, thanks go also out to Remi Bosman from Sioux for helping us to set up the design for the MPS solution.

If you are coming to the conference, consider joining the workshop and cheering up for the team representing MPS. We all wish them good luck! 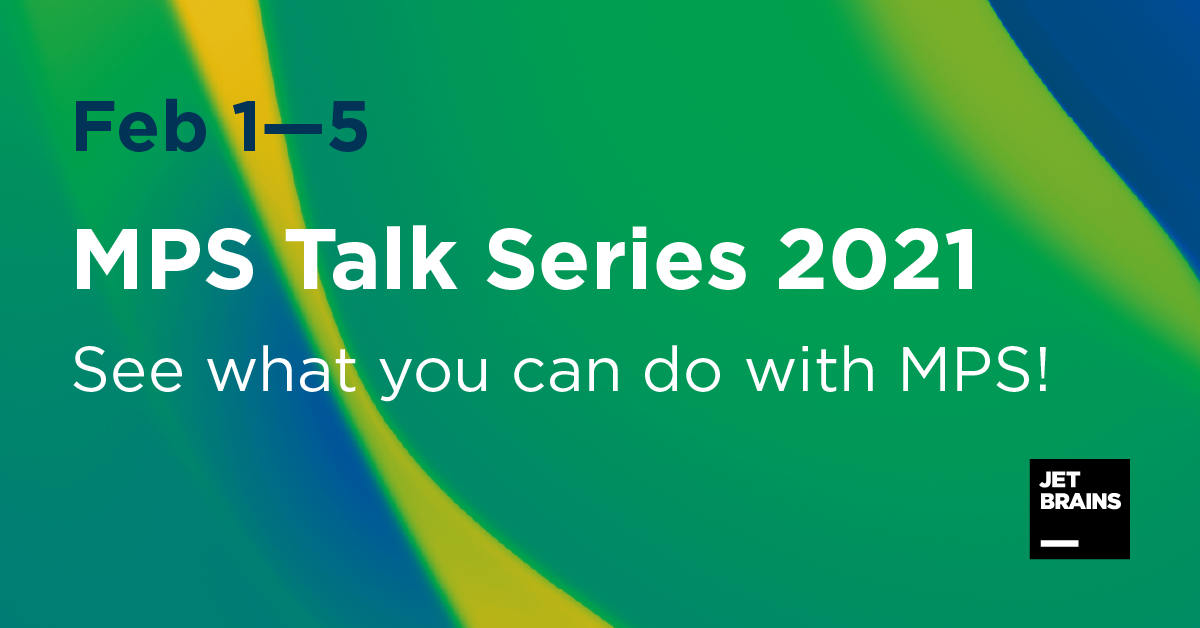 We would like to invite you to join us for MPS Talk Series 2021, a special online event taking place from 5:00 pm to 7:00 pm CET every evening February 1–5. The event will consist of presentations from the MPS community, itemis, and the MPS team, with a focus on knowledge sharing, showcasing mature projects built with MPS and the progress of the, long-awaited, MPS Web Technology. Save your seat Agenda: February 1 17:00 - 18:00 CET: Building DSLs on Top of KernelF, by Markus Völter Starting a DSL from scratch is tedious and boring work, especially since many require basic expressions and dat

One month until the MPS event in Munich!

In exactly one month we will have our event: “Everything you need to know about JetBrains MPS” in Munich. During the event, our speakers will give you some real-life examples and insight into DSLs that are being used effectively within many different industries. The event is completely free but space is limited and so registration is required. Register here. Have a great day! Your JetBrains MPS Team The Drive to Develop

Dear Friends, Our community is growing and we believe that the exchange of knowledge and experience is key to building better products with MPS. We are happy to announce our first MPS community event is happening Spring 2018. This event will focus on 3 main topics: sharing what everyone is doing with MPS, introducing the technology to new and prospective users, and explaining our future plans as the MPS team. When and where?! Well, we think we have to decide this as a community, so we have created this 3-minute survey to help you get involved. Please answer this survey. Have a nice d

Join us on our webinar Projectional Editing and Its Implications in Domain Specific Languages on Tuesday, September 19th  from 4:00 PM to 5:00 PM CEST (10:00 AM - 11:00 AM EDT) We have been taught for many years how programming should be done. Have we ever stopped for a second and questioned whether perhaps there is a better way? During this webinar, we will challenge the status quo and expand the boundaries of what it is known as “normal”. Our goal is for you to leave this session inspired, enriched, and motivated to try something new. Register here. The Drive to Develop -JetBra