Today we are starting the Early Access Program for AppCode 2016.2 EAP, with a huge number of changes available in the very first build. You’ve waited for some of them for a long time, so check it out right now!

This build brings one of the long-awaited features from our roadmap – initial implementation of inspections and intentions in Swift. Now AppCode shows warnings and errors for Swift code in the editor right as you write it!

To display these warnings and errors, AppCode uses SourceKit engine bundled in the Xcode version selected in AppCode settings. Moreover, most quick-fixes available for Swift in Xcode can now be used in AppCode. Just press ⌥Enter on a warning or error and select Apply Fix-it:

In case of several fix-its suggested for a particular code block, AppCode will display their descriptions, allowing you to select the necessary action: 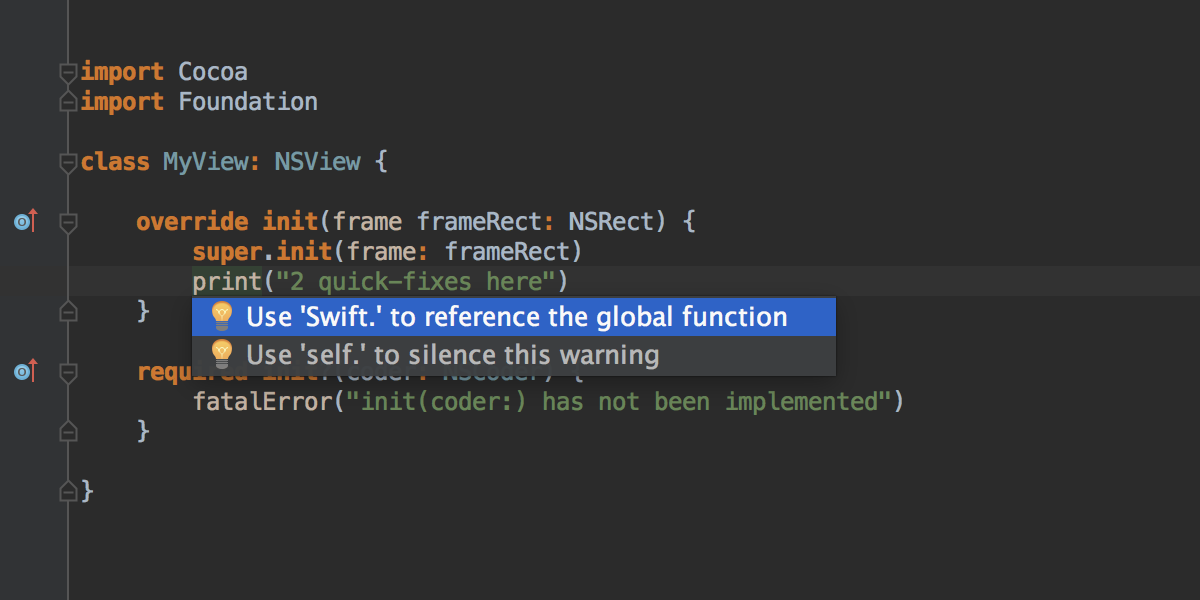 Inspection settings are available under Preferences | Editor | Inspections | Swift | SourceKit inspections, where you can turn it on or off at any time: 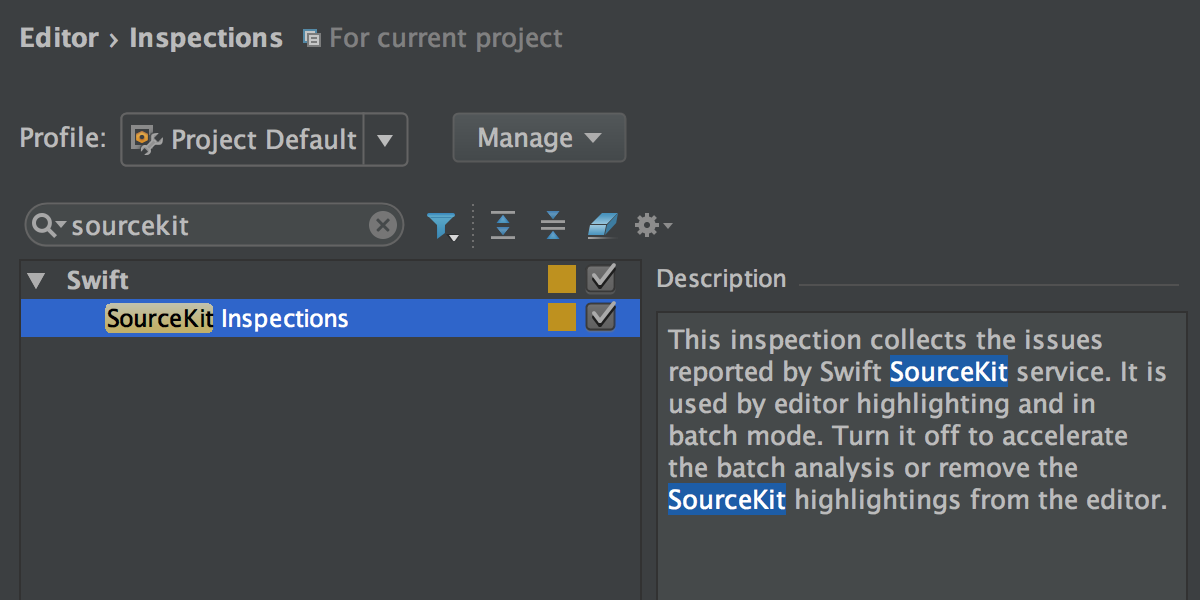 Live Templates in AppCode are similar to Xcode snippets. They contain predefined code fragments so that you can use them to insert frequently-used or custom code constructs into source code quickly. Starting with this build, Live Templates are also available for Swift language:

You can also add your own custom Live Templates for Swift under Preferences | Editor | Live Templates | Swift. Select predefined code context to make your live templates available only for Swift declarations, statements or any code construction: 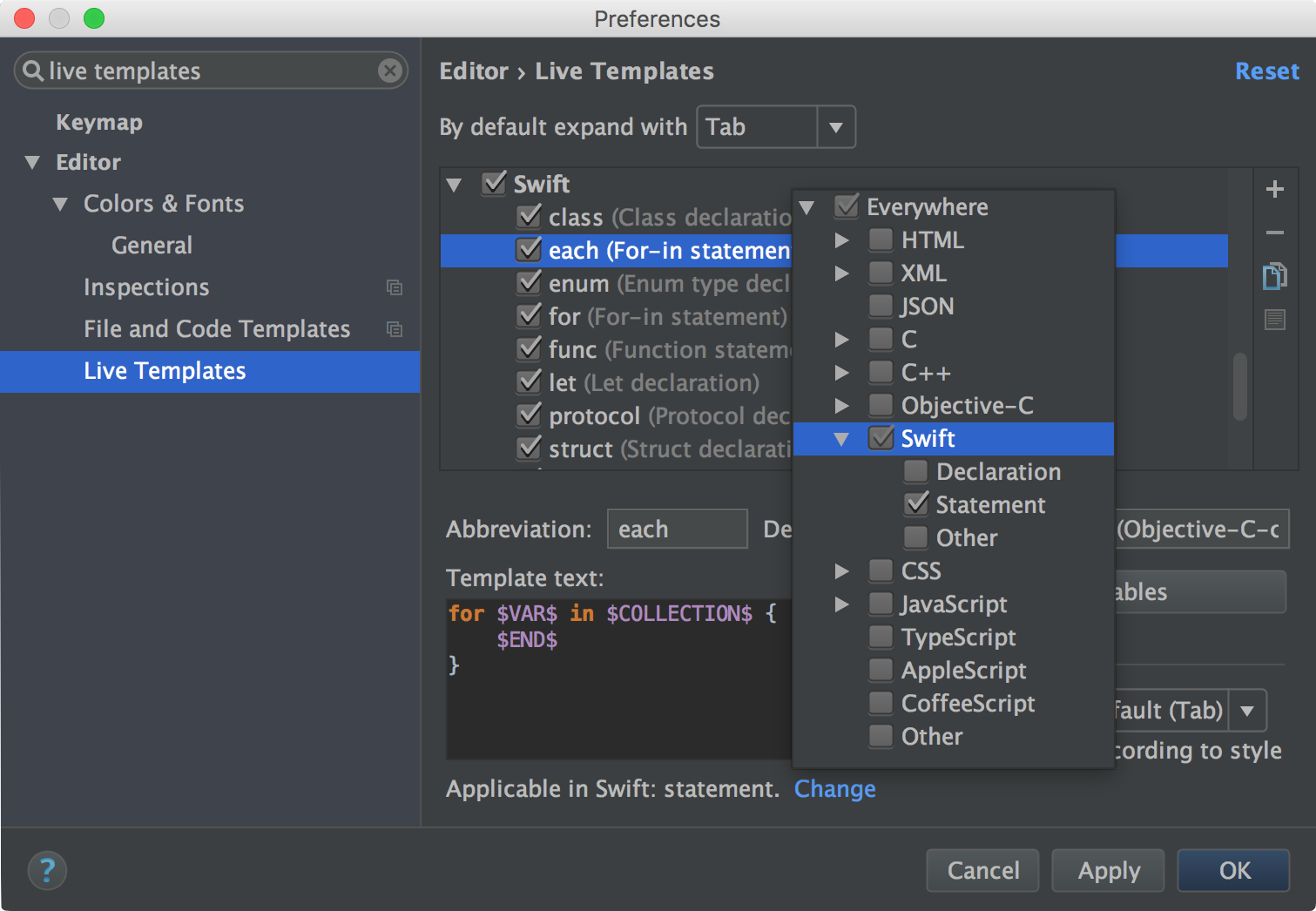 In addition to the SourceKit inspections mentioned above, we decided to make the Spelling inspection available for Swift language. If you happen to mistype something in your comments or code constructs, AppCode will underline the misspelled word. Then you can fix the problem simply by pressing ⌥Enter:

This feature had one of the shortest descriptions in our tracker, one simple line:


Nevertheless, it was a huge task we needed to finish as part of preparation for creating Introduce Variable and Inline Variable refactorings for Swift. This build contains an initial implementation of recursive resolve for closures in Swift, including correct resolve for shorthand arguments. This change brings the following features:

Please note that some issues with closure resolve still exist; most of them are added as sub-tickets to the base task. We will continue to work on them and will try to resolve the most important ones before the 2016.2 release.

It’s been awhile since we implemented the Rename refactoring for pure Swift code and Objective-C declarations used from Swift. Now we add the ability to rename Swift methods and method parameters used from Objective-C code! Let’s take a quick look at it:

Another great addition in this build is improved Find Usages (⌘F7) functionality, which now also finds occurrences of Swift methods used from Objective-C, including initializers.

There are also lots of fixes for code declarations annotated with @objc attribute, bringing improved parsing and highlighting for classes, protocols and enums, and correct resolution for properties, subscripts, getter and setter names.

You may know that AppCode and CLion teams work together to bring you first-class C++ support in both products. But sometimes C++-related features also intersect with Objective-C, and one such feature recently implemented by the CLion team is initial support for Doxygen. For now, the same features are available for C++ support in AppCode and some of them have already been added for Objective-C as well:

Please note that because of some issues, automatic comment generation for Objective-C is not yet included into this build, but we will try to deliver this feature before the 2016.2 release.

With Complete Statement (⇧⌘Enter) feature added in this build for Objective-C and C++, AppCode inserts parentheses, braces, semicolons, quotes, etc. for you where necessary, and then moves the caret in position where you can start typing the next statement automatically. The simplest example can be just adding a semicolon, but even this small feature can be helpful in case of complex code constructions:

Read this blog post to learn more about it.

The following changes are available for VCS support in AppCode:

Phew, that does it! Full release notes for this build are available here. This being an EAP for a major update, the build does not require an active license so you can use it free for 30 days.

Download AppCode 2016.2 EAP, give it a try and let us know what you think!

2016.2 EAP
AppCode 2016.1.3 update is outComplete Statement in AppCode
Comments below can no longer be edited.

Hi everyone, You may have already heard about the Kotlin/Native plugin for AppCode. Our initial intention in developing it was to simplify the integration of the Kotlin/Native framework into an Xcode project, so we could automatically add the needed build phases, invoke Gradle when needed, and so on. In addition, we wanted to simplify code-writing by resolving Kotlin entities from Swift and Objec

Hi everyone, The new AppCode 2021.1 Beta is available for download from our site. This beta build brings support for the SE-0287 proposal and makes it possible to use property wrappers for local variables. There are also some minor bug fixes – you can find them all in our release notes. Your AppCode team JetBrains The Drive to Develop