Everyone is very welcome to download and try its new features, bug fixes and other important improvements. As usual, we’re eager to hear your feedback on it in comments to this post or in our public issue tracker. 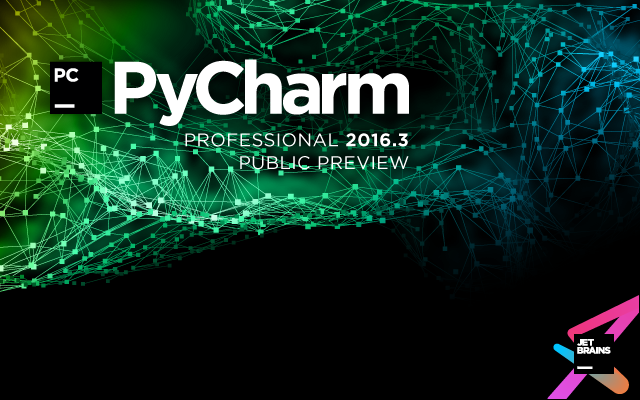 The release of PyCharm 2016.3 Public Preview indicates that PyCharm 2016.3 has entered the Beta phase. It’s now feature complete and we won’t be adding any new features, but focusing on polishing the existing functionality.

PyCharm 2016.3 will come with the following support for the latest Python 3.6:

PEP 515: Underscores in numeric literals: This PEP extends Python’s syntax and number-from-string constructors so that underscores can be used as visual separators for digit grouping purposes in integral, floating-point and complex number literals.

PEP 525 and PEP 530: These 2 standards introduce asynchronous generators and comprehensions. PyCharm provides code inspections for them and uses them for type inference.

Additional support for new PEPs now includes code injections for annotations inside function type comments. That means PyCharm recognizes the syntax and provides highlighting for type hints specified in comments, checks them for errors, provides quick-fixes and monitors that all hints used are properly imported from the typing module. That makes it easier and safer to use type annotations in your code.

Dango support has been enhanced in many ways:

Thanks to our active user Yuli Fiterman for his generous help and valuable code contributions, together we’ve fixed a bunch of bugs related to multi-line commands in Python console. IPython console got some improvements as well.

The brand-new Simplified Variables View option is enabled by default and hides all dunder variables, instances of function, classobj and module under a separate group named “Special Variables” in the Variables Explorer. Additionally, if an IPython-powered interpreter is used in the debug mode, all the utility IPython variables are moved to this group as well:

For variables with long values such as numpy arrays or pandas dataframes, you can notice the special new “View as…” hyperlink in the variables explorer. Click it to view a value in a separate popup viewer:

On the Docker Compose integration side we’ve made a couple of neat improvements:

The virtual environment associated with the current project you’re working on is now activated by default when opening PyCharm’s embedded terminal. Auto venv activation is supported for bash, zsh, fish or Windows CMD. You can specify or alter the shell of your preference in Settings (Preferences) | Tools | Terminal.

With PyCharm 2016.3 we bring you improved code coverage tool integration. We’ve added a new “Branch coverage” option, which is disabled by default, but can be easily enabled in Settings (Preferences) | Build, Execution, Deployment | Coverage | Python coverage. When this option is enabled, PyCharm adds additional information to pure line coverage reports, marking the coverage of lines with conditional statements as incomplete in case one or more branches haven’t been executed.

We’ve implemented integration with VMprof in PyCharm 2016.2. With this new release we take another step forward towards productive profiling, with support for the “profile lines” option available for VMprof. This option is enabled by default when you run your project in the profiling mode. Once statistics is gathered, apart from just seeing the standard profiler report, call graph and call tree, you can also see the line profiling results right in the editor in the left gutter. Lines consuming more processor time are marked in red. To use this functionality, you just need to install the vmprof package on your interpreter with the package manager.

In PyCharm 2016.3 Public Preview you can find various Database tool enhancements, which come from DataGrip, the JetBrains database IDE. PyCharm incorporates all the new features of DataGrip:

To download the preview build (available in both PyCharm editions) for your platform, go to our EAP page. As always, your feedback is very appreciated in our issue tracker!

Your PyCharm Team
The Drive to Develop

PyCharm 2022.1 EAP 2 is now out! This time around, we added a nice code insight enhancement for TypedDict, the ability to manage Python packages from custom repositories under authorization, several new improvements to Vue, and more to make your programming experience better! Download the EAP builds via the Toolbox App or directly from our website. Important: EAP builds are not fully tested

The fourth PyCharm 2021.3 EAP build is out! Please give it a try, and don't forget to share your feedback on Twitter (by mentioning @pycharm) or by reporting issues to our tracker! DOWNLOAD PYCHARM 2021.3 EAP This is the last EAP build before the release, and our focus now is on fixing important bugs and improving the new features after carefully hearing your feedback. For the full list of fixes

The third PyCharm 2021.3 EAP build is out! Please give it a try, and don't forget to share your feedback on Twitter (by mentioning @pycharm) or by reporting issues to our tracker! Important: PyCharm EAP builds are not fully tested and might be unstable. Starting from this build, you’ll need to provide your JetBrains credentials to use the trial versions of PyCharm. You can read more about