Less then two months have passed since RubyMine 5 was released. Hopefully you have tried it and hopefully you like it. But the life goes on and we don’t want to lag behind, so we’ve decided to make the next RubyMine release shortly. Today we’re glad to announce the RubyMine Ichii EAP! By the way, ’Ichii’ is Japanese for yew (a kind of tree), in line with our codenaming tradition. 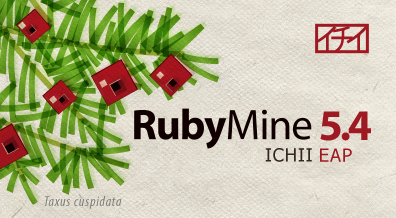 Web-developers might be glad to know Emmet abbreviations are now supported for faster HTML & CSS coding as well as CoffeeScript debugger can now be run for non-Rails apps with a help of Node.js.

Those who prefer JRuby now can be more efficient with Nailgun support.

Please take a look at the release notes and try RubyMine Ichii. As usual, we want your feedback!

Hi all, RubyMine 2022.1.1, the first bug-fix update for the current major version, is now available. You can update using the Toolbox App, right from inside the IDE, or by downloading RubyMine 2022.1.1 from our website. With this update we fixed the issues that were caused when Rails 3 support was discontinued. Please read our statement on the retirement of Rails 3 and other outdated features. You’ll find the following improvements in this update: The debugger now supports Ruby 3: RUBY-27310. Support for injected JSON in .liquid files is available: RUBY-27525, RUBY-28058. We fixed a

Dear all, As some of you already know, RubyMine 2022.1 was shipped without support for Rails 3. The reason for this decision was quite simple: Rails 3 reached End Of Life many years ago, and most of you had long since switched to the newer Rails releases. Hence, continuing to support Rails 3 in RubyMine simply didn’t seem practical given the amount of effort that would have been involved. However, we didn’t communicate this decision in a clear and timely manner, which resulted in reasonable questions from some of our users who still use Rails 3. We would like to apologize for that and assure

Hello everyone, RubyMine 2022.1 is now available! Below is a brief overview of the most notable features. For a detailed description of this update, please visit our What’s New page. Support for new language features RubyMine 2022.1 includes support for most of the new Ruby and RBS features introduced in Ruby 3.1, such as bounded generics, RBS collection, anonymous block argument forwarding, generic type aliases, and more. UX improvements The user experience has been refined with a redesigned New Project dialog, support for new Rails 7 generate options, and improvements for notifications, s