RubyMine
Download
Home/RubyMine/What’s Up With Ruby? A Small Review of RubyKaigi 2017

As you probably know, last week the RubyMine team joined RubyKaigi 2017 in Hiroshima, Japan. It was great meeting and talking to so many Ruby developers, and especially to hear their feedback and suggestions about RubyMine and Ruby as a whole. Thank you!

Special thanks to the Samuraism team for their invaluable help during the preparation and participation in the conference. We couldn’t do this without you, folks! 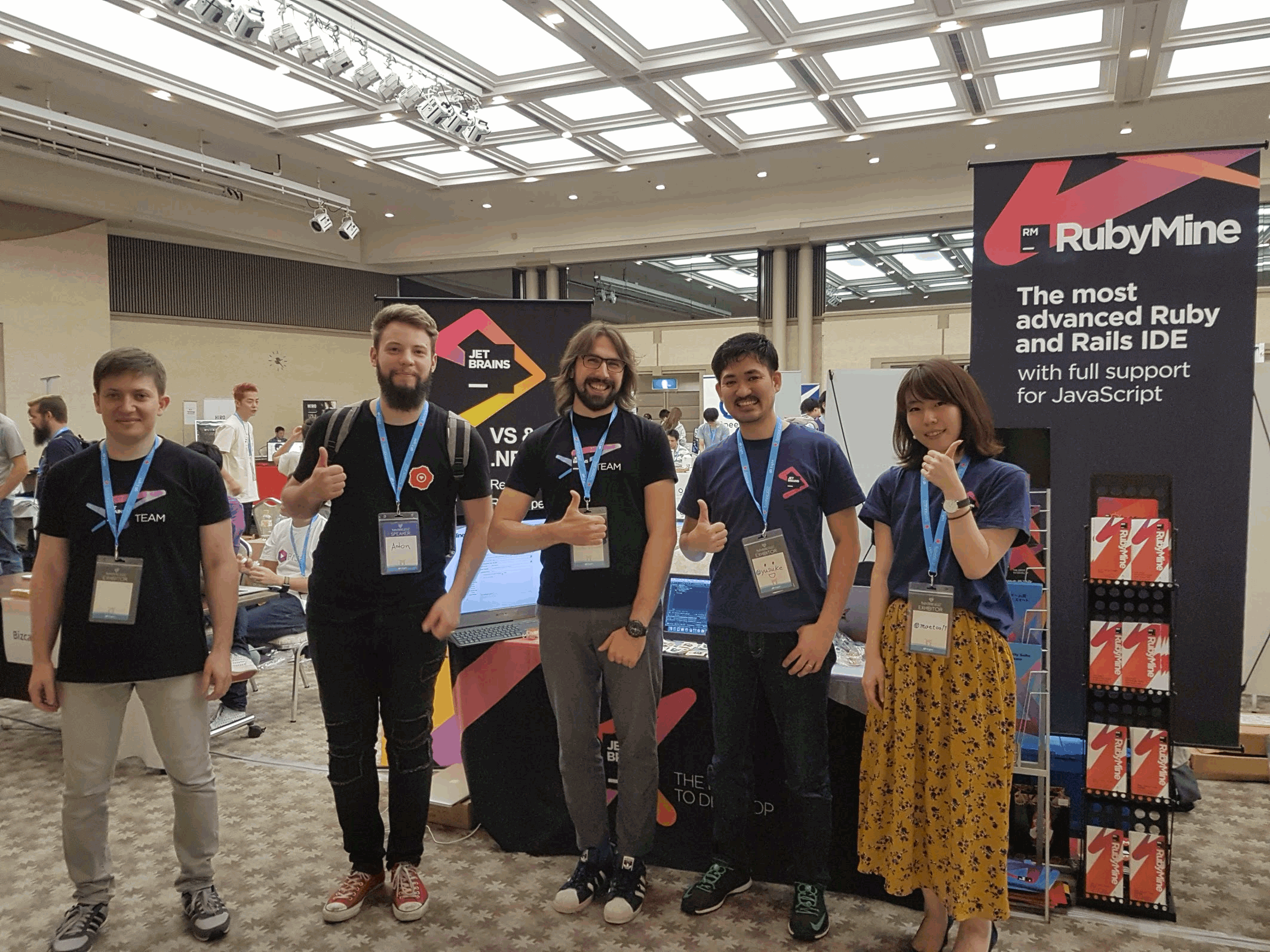 What’s up with Ruby?

The need to improve Ruby’s type system seems to be the most important trend. There were a number of talks suggesting improvements for type annotations in Ruby, including “Automated Type Contracts Generation” by our own Valentin Fondaratov. Take a look at the updated presentation:

You will find this and many other talks from the conference on RubyKaigi’s channel on YouTube (still getting updated at the time of writing).

At every conference we conduct a teeny-tiny survey to figure out the most used tools for Ruby and Rails development. This time we only got 40 responses, but still, the results differ from what we got at the previous RailsConf. As expected, the Japanese Ruby community stays “hardcore” with Vim as their number one choice for Ruby and Rails development:

This contrasts markedly with the previous RailsConf results where 31% of those surveyed reported Sublime Text their primary editor, and another 28% preferred Atom. That said, Vim was the editor of choice for 18% of the respondents: 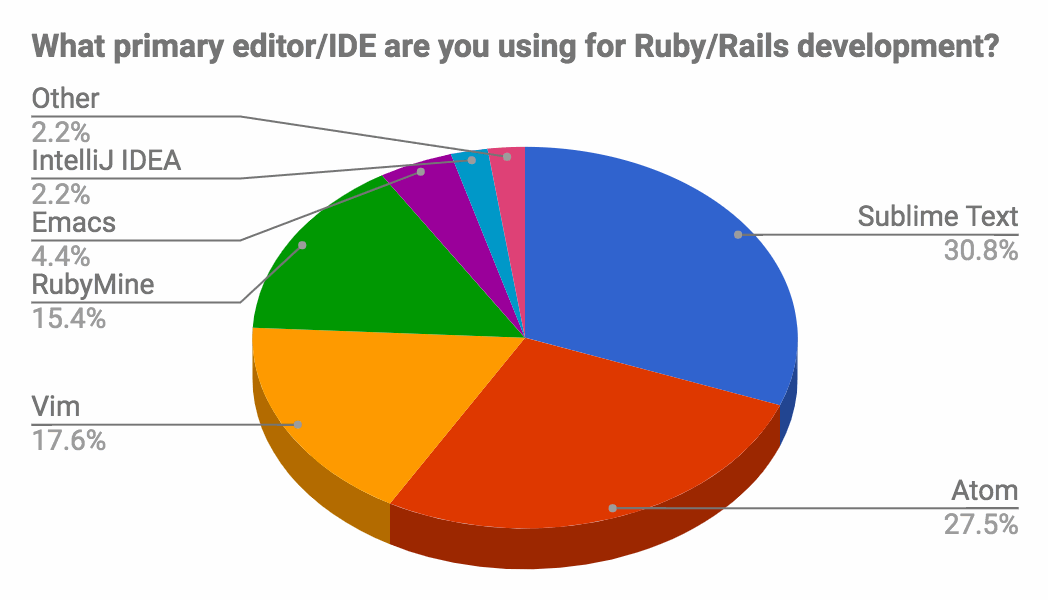 Also, Vue.js coupled with Rails turns out to be popular already: 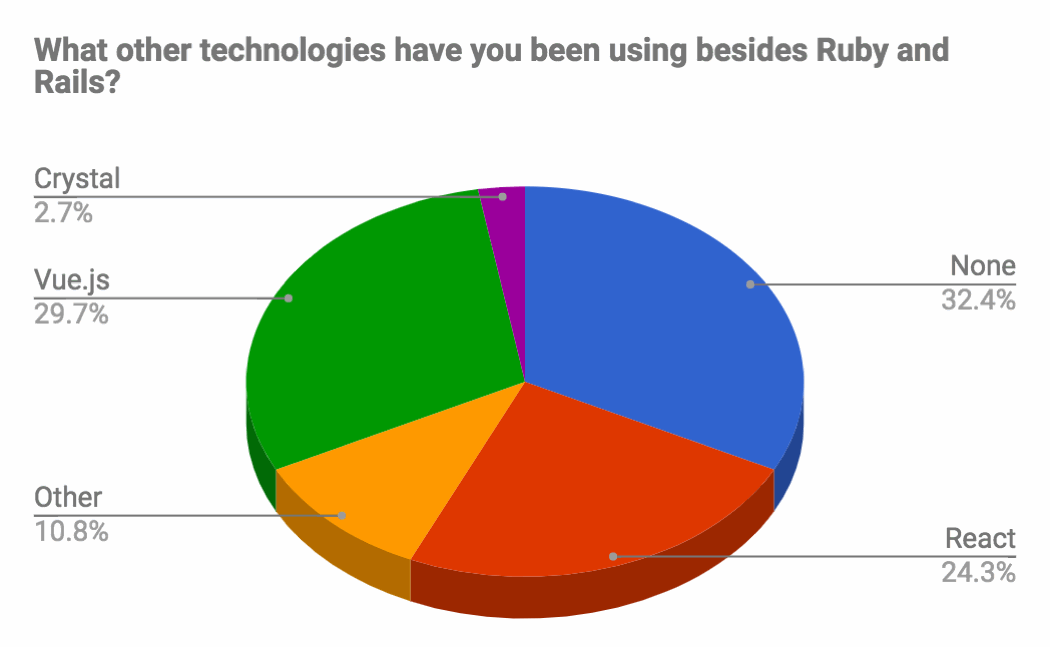 Again, this differs from the RailsConf reports. React and AngularJS frameworks seem to be more popular in the West: 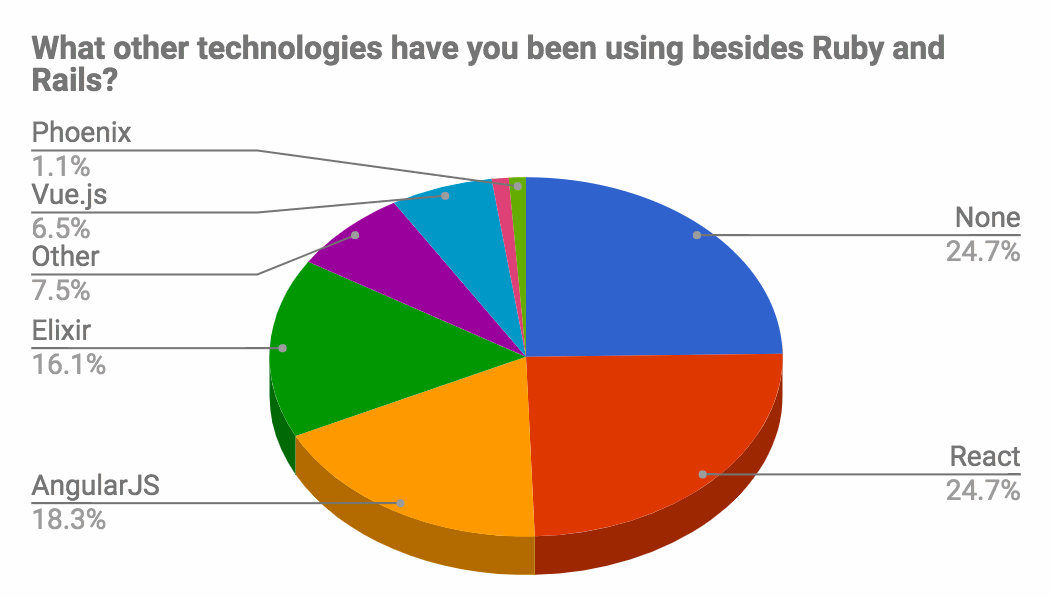 By the way, if you are using RubyMine, you’ll be glad to know that the IDE provides intelligent support for `*.vue` files through an official JetBrains plugin. Check out the webhelp for more info.

Anyway, it was great to be part of RubyKaigi this year, and we’ll hopefully see you again next year!

Meanwhile, make sure to try great new features in the RubyMine 2017.3 EAP, and join us on Slack!

This is a guest post by Junichi Ito (@jnchito). Junichi is a Ruby programmer at SonicGarden.jp, translator of Everyday Rails Testing with RSpec, and one of the most popular Ruby writers/bloggers in Japan Ruby 2.5.0-preview1 was released on October 10 2017. It introduces lots of new features and performance improvements. I have handpicked 10 new features to go over. I hope this article will help you understand some of the coming changes available in Ruby 2.5! rescue/else/ensure are allowed inside do/end blocks without begin/end You can write rescue/else/ensure clauses without begin/end keywo
October 24, 2017 by Artem Sarkisov

How RubyMine Helped Me Learn to Code Faster

This is a guest post by Adrian DeGus. Adrian is the founder of Nuvro, an online project management tool for teams of all sizes. He also runs SEMCentric, a digital marketing agency based out of Phoenix, AZ. Last year I made the decision, like countless others before me, to learn to code as a means to launch a startup. I had been managing web development projects for years which gave me a bit of an advantage, but the road was still far more grueling than I had expected. Within a couple of months, I realized that all the people online claiming to have learned programming in 1-3 months were ei
September 19, 2017 by Artem Sarkisov
Subscribe