Hello everyone! Today we’re opening EAP for TeamCity 8.0 (code name Gaya) in order to give you some fresh stuff, to play with during weekend. 😉

Let me briefly describe what we’ve done already and share some of our plans for TeamCity 8.0 (we expect it to be released in Spring 2013).

The major feature of TeamCity 8.0 is sub projects, or project groups (see TW-705, yes, a rather old and rather popular request). We hope it will make TeamCity more scalable in terms of information presentation and the notion of project in TeamCity will become a better match to a real life project (what we call a project right now is rather a VCS branch). While moving in this direction in this EAP we’ve changed how project configuration files are stored on the disk and introduced “root project” (a parent for all of the projects in the system), read more.

Another important feature which we’d like to address in 8.0 is import/export of projects and build configurations (TW-4124). It can become really handy for those who have to maintain several TeamCity instances. At first we plan to provide editable IDs for a project, build configuration, template and VCS root. This will allow assigning IDs on one server so that they do not intersect with IDs on another one, thus will simplify moving configuration files among servers. In this EAP we’ve made the first step in this direction — editable project IDs.

We’ve heard complaints from our customers about the cleanup process. Highly loaded TeamCity server can produce thousands of builds and gigabytes of data each day. Not all of this data will be used in the future, and there is an ability to configure cleanup rules to remove garbage from disks and from the database. Unfortunately, not only this operation takes significant time but web interface becomes inaccessible while the cleanup is in progress. In this EAP we’ve made several improvements in this area, read more and let us know how it works for you.

There is also a couple of IDE integration features (currently only available in IntelliJ IDEA plugin). These are: already mentioned some time ago remote debug on agent and showing of test status (success, fail, muted, investigated) right in the editor, plus some other smaller improvements.

Our Release Candidate build for TeamCity 2020.2 is ready! The next release version of TeamCity is just around the corner, but our Early Access Program users can be the first to try the new features today. You can find all 70+ updates and fixes in our tracker. In these EAP notes, we will explore the highlights. Pull request improvements Support for Bitbucket Cloud pull requests Your TeamCity builds can monitor pull requests in different version control systems. And now – in Bitbucket Cloud. When you send a pull request to a Bitbucket Cloud repo, TeamCity will detect it and run a new build. Fo
November 17, 2020 by Maria Kudryavtseva 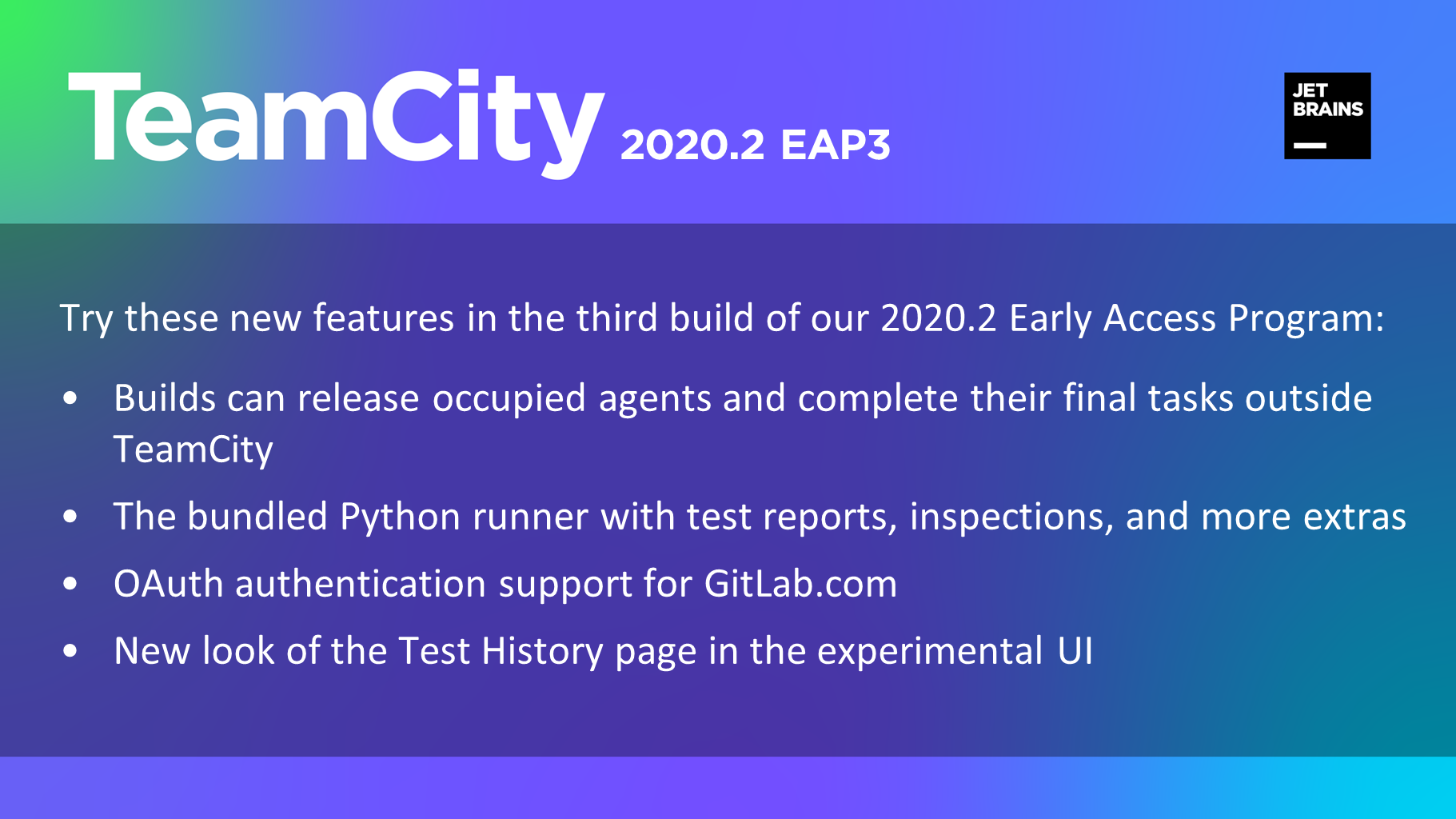 Today we are releasing our third Early Access Program build for TeamCity 2020.2! TeamCity 2020.2 EAP3 comes with 90 improvements and fixes. In these release notes, we describe the most exciting updates. Agentless build steps TeamCity introduces agentless build steps – steps that can run without a build agent, in an external software. Normally, a running build occupies a build agent until the very finish, even if its final steps are executed outside TeamCity. Now, your build can send an instruction to "release" the agent. This agent becomes available to other builds, and the current build comp
October 27, 2020 by Maria Kudryavtseva
Subscribe